To say that colonial style homes is simple would be an insult to anybody who wants to know about this trend. Read on to learn what makes a colonial home so recognizable and attractive to realtors and architectural buffs alike.

What Is a Colonial Style House: A Summary

The predominant architecture that captured many homes hundreds of years ago owes its style to colonial England. These homes tend to have a couple of stories, fireplaces, and brick or wood facades.

However, as with much of America, the prototype colonial home took on its own characteristics over time, and we now associate this style more with the U.S. than with the U.K. or Europe.

What Is the Colonial House Style? 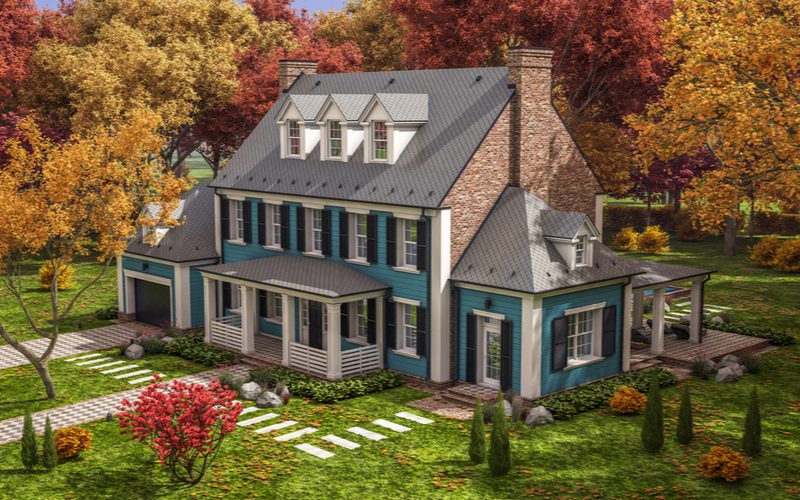 A colonial home has many features that make it brand as such. These include the following:

In contrast to styles like the Midwestern ranch, the colonial house style construction has more than one story to its height. There is typically a flat front with a centrally-located front door and multiple windows visible on the same plane.

Rectangular and boxy at times, these homes retain some New World elegance in their simple functionality. When viewing a colonial house from the street, you see roof shingles due to the steep incline. This construction allows for attic space and prominent side gables.

The fireplace has either one central chimney, or two equally-placed chimneys on opposite ends of the roof. The first floor of a colonial focuses on socializing, with a moderate-to-large-sized kitchen and common areas like living and dining rooms.

The second floor comprises bedrooms and bathrooms, with a wide staircase usually in the center of the home. If there is a third floor, it might be additional bedrooms.

But most commonly, there is attic space above the second floor that provides storage space or modest living quarters for children, boarders, or servants. This type of architecture was originally meant to harbor large families, as indeed the early American settlers had.

When trying to integrate into the colonial economy, they needed as many helping hands as they could get! The roomy square footage of colonial architecture also allowed for longtime servants to lodge with the family they worked for.

The charm of the colonial house style lies in its simplicity. Americans who first resided in these homes were industrious people, only a few generations removed from old-world Europe, and for the most part had no interest in the elaborate trappings of the Victorian-era architecture that followed.

Most colonial homes, whether authentically historic or not, retain a modest appearance. You commonly see simple landscaping (if any) in a yard surrounded by a traditional fence.

Though location plays a part in yard size, these are typically not sprawling estates in the Northeast, where the population is denser and real estate is more valuable.

In the Coastal South and Gulf regions, colonials may take on plantation air, with lavish porches and ample land surrounding the house. Later iterations of the colonial-style (such as Colonial Revival) build on the basic model while adding decorative features for an attractive aesthetic.

But for the most part, early colonials remain subdued, with exterior paint colors like navy blue or gray and minimal detailing.

Geographically, the colonial-style of architecture is all around the world. But to see the quintessential prototype, look no further than New England.

Immigration patterns of the era dictate what types of homes you see where. Cape Cod houses in Massachusetts, German-inspired brick homes in the Great Lakes states, and impressively spacious choices in Louisiana all fall under the colonial house style moniker.

This also extends down along the coast in places such as Williamsburg, Virginia. A map of Revolutionary War battles provides a decent skeleton for an area where you see many houses of this type, due to so many of them remaining for historical value.

As the ranch is to the Midwest and pueblo to the Southwest, so colonial-style architecture is evocative of New England (though it’s found just about anywhere). Even in modern times, the simplicity and accessibility of the colonial floor plan remain attractive to many homebuyers and first-time builders. 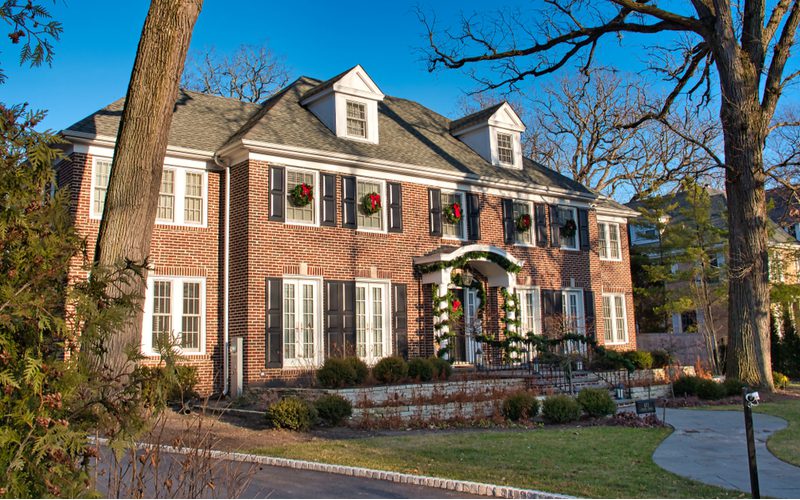 Over the decades, more intricate details have gone into the structure and aesthetic of the Colonial house style. But the general framework comprises these characteristics: a multi-story, spacious home with a floor plan that is somewhat closed off compared to modern preferences.

Stately and without frills, like the society that built the original homes, most colonials incorporate brick or wood into their construction.

They also tend to have at least one fireplace with prominent chimneys, lending them a postcard-friendly appeal. Symmetry reigns paramount in the colonial house style – you won’t find quirky construction nor superfluous decorative touches in the earliest versions of this home.

Hollywood fans of movies made within the last few decades might recognize a colonial house style from these pop culture scenes:

The Founding Fathers meet in the home of a politician to discuss current events and tension with the English Crown. Women in bonnets and men in breeches raise families in the outskirts of a city while keeping close ties with nature.

Edgar Allen Poe, Louisa May Alcott, and Emily Dickinson huddle over writing desks crafting their lyrical prose with pen and ink. These scenes are evocative of a specific era we call the American Colonial period.

During the 17th and 18th centuries, the nascent U.S. fluctuated between upheaval and settling, always with incredible growth in population and international influence.

Reaching its height during the Revolutionary War, the Colonial era was fraught with growing pains as the colonists flew the coop from their English mother hen and found a place in the New World.

Unlike some other home styles, the colonial house style has stayed relatively consistent over time, but there have been some natural developments. Since the colonial era was a time of mass immigration to the American colonies, there are various European influences in its architecture.

Notably, these include French, German, Dutch, and Spanish influences. Any home has regional as well as cultural nuances to its design, depending on where within the U.S. they built it. Check out these twists on the classic colonial: 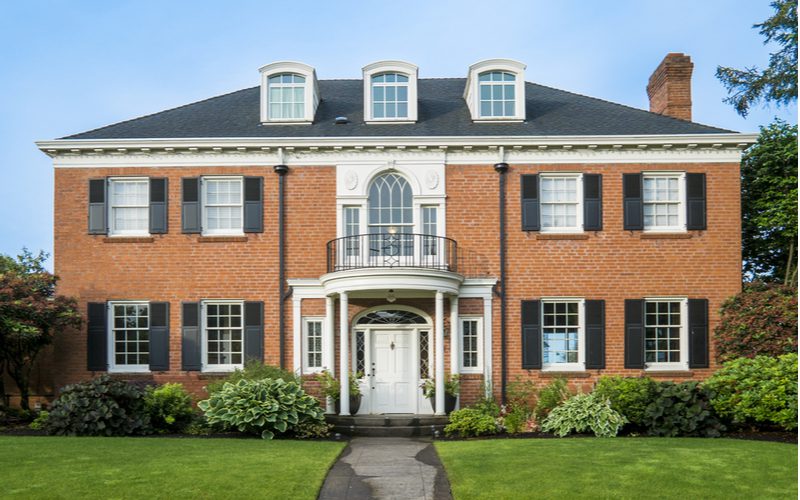 Does a home need to be built in the colonial era to be a colonial house style?

No. Though many are historic relics and used as museums if not living spaces, others still function as residences (though not without significant upkeep due to their age). There are many colonial-inspired houses built today that draw their influence from earlier designs.

Can I add on to my colonial house style?

Yes, due to the block construction, this style of home welcomes easy additions. Many colonials incorporate a garage, portico, or extra room added later without disrupting the aesthetic or symmetry of the lines.

Are there drawbacks to a colonial house style?

Compartmentalized rooms which section off parts from one another and may not be as conducive to an entertaining company as the open floor plan of some other types of architecture. Heating and cooling this style of home may also prove a challenge, due to its boxy construction.

Finally, the age of some more historic colonials is a barrier to economic homeowner decisions, as there seems to always be issues with brick cracking or wood clapboard. 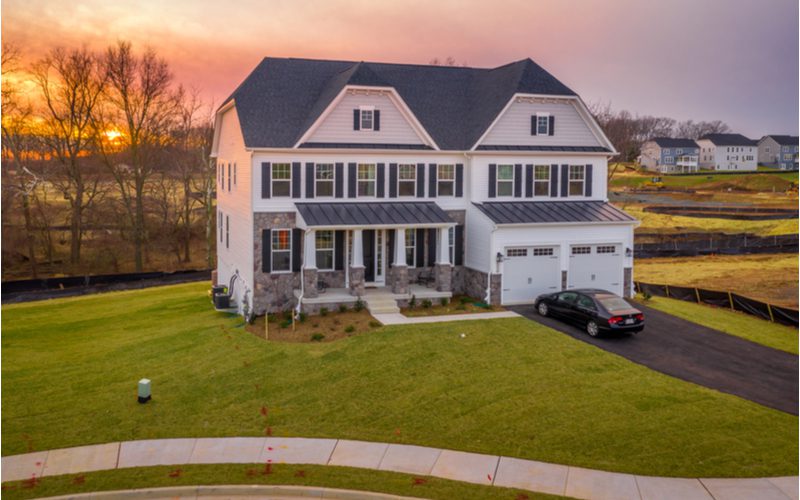 For the architect or homebuyer with an affinity for American history, a colonial house style provides endless interest and appeal. Affordable, elegant, and comfortable, this type of architecture became a favorite of early colonists centuries ago, and doesn’t show any signs of its popularity waning.