There are many types of Victorian homes, each with defining characteristics. If you’re interested in an old-fashioned house, keep reading to learn more about the homes of this era — we think you’ll learn a thing or two.

Victorian houses typically share a few characteristics. However, this period lasted for nearly 100 years and encompassed various socio-economic movements. There are 9 primary types of Victorian homes:

Read Next: Types of Home Styles

What are the Types of Victorian Homes? 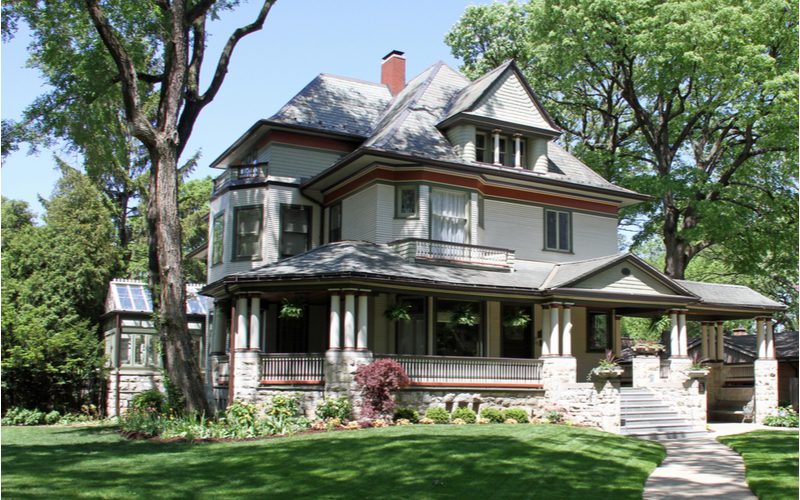 The Victorian era lasted from 1820 to 1914, which roughly corresponded to Queen Victoria’s reign. This period consisted of a class-based society, changing politics, a growing economy, and the peak of the British empire.

Throughout the period, different types of architecture became commonplace. Nevertheless, you are likely to find many of these features on a Victorian home:

The Gothic Revival is part of the Romantic era in architecture. This style had popularity in domestic and commercial buildings. It took inspiration from medieval churches, as evidenced by the pointed features and intricate decorative details.

The roofs of these homes had steep pitches and cross gables, as well as decorative and embellished trims. Often, the windows would extend into the gables.

Under the gable, you might find a verge board. You could find elaborate ornamentation on the roof-wall junctions, doors, windows, and porches.

Also, many of these buildings had a single-story porch on the first floor. Not everything was black and gray ‒ Gothic Revival homes had plenty of colors and textured walls. Some other features of these houses were:

Italianate homes were also remnants from the Romantic era. They mirrored Italian villas from Umbria, Tuscany, and Lombardy.  These two- to three-story houses had hipped roofs, wide overhanging eaves, and covered single-level porches.

Also, many had curved arches over the windows and doors on the front face of the house. The windows were long, narrow, and elaborate. Also, the porches, cornices, and doorways displayed intricacy.

You might consider a home to be Italianate for its ornamental brackets and Corinthian columns as well. Other features included:

The Second Empire style originated in France. Around this time, American cities started to become bigger and more diverse, and this urban revolution appeared in architecture. These Victorian homes had tall facades and distinctive Mansard roofs.

These four-sided gambrel roofs have diamond-shaped dormer windows as well. Many of these homes have rectangular or square bases, decorative millwork, and large attics. You would also find double entry doors.

Stick homes resembled Tudor houses. They had stick work which manifested as horizontal, diagonal, and vertical planks along the exterior. These wood houses had:

What differentiated Stick homes from other Victorian houses was the lack of bay windows and more subdued decoration.

Queen Anne homes were some of the most prominent architectural styles by the 1880s. You could spot these houses from their irregular roof shapes, steep pitches, and front-facing gables. The porches extended on one side of the house.

Some homes had partial porches while others were full-width and covered the front face of the house.

The embellishments on Queen Anne homes included spindles on the railing and porch supports, columns with detailed corners, and gables extending from the roof. Other distinctive features included:

While this style is one of the most popular, it was unaffordable to many people during the Victorian era.

Some historians consider “Eastlake” as describing a family of ornamentation applied to the surface of other Victorian houses, such as Stick to make Stick-Eastlake homes.

Others consider some buildings to be purely Eastlake, which would make it an architectural style. Sometimes, architects would design features of homes to fit the Eastlake style, like verandas and porches.

This Victorian home has carved, angular, and notched features rather than curved ones. The decorative elements feature wood shaped by powered jigsaws or turning with a lathe. Eastlake style elements include:

These homes combined light and heavy elements to add more depth to a building. Usually, the components were ordered from catalogs and assembled at the house.

You would find these houses with earth tones or multiple colors to emphasize the various elements. The house usually had a darker body with lighter trim.

The Romanesque Revival took inspiration from European churches, as evidenced by the turrets and arches. It also showed brick exteriors, reddish hues, and intricate stone details.

What set these homes apart was the lack of Victorian wood trim. Other identifying Romanesque Revival features are:

You could find curved arches above windows, stonework architecture, and prominent towers in Richardsonian Romanesque homes as well. Some other features were:

These homes signified the rebellion of architects. The wood shingles would extend upon the roof and siding, giving the houses a rustic appearance. Also, they had open interior floor plans and multiple brick chimneys.

The roof eaves would sometimes morph into carriage overhangs and porches, which added a sense of fluidity and connection to the home. Some variations of Shingle houses involved squat half-towers and tall turrets.

Others had Palladian windows and gambrel or cross-gambrel roofs. You could find stone arches over porches and windows as well. Sometimes, the walls had patterned or wavy shingles. Others deviated from the wood with roughhewn stone.

Folk Victorian houses combine parts of the American homestead style, the classic English cottage, and romanticism. You will usually find these homes in rural areas due to their functional advantages for those far from the urban setting.

This simplistic architectural style is the most common one, even though you probably picture Queen Anne when you think of Victorian homes. They have a square appearance, gable roofs, front porches, and detailed trims.

These houses are two stories tall and often have double-story porches. The Folk Victorian style originated from the availability of glass, mills, and wood. They had a simple folk body with Victorian detailing and proportions. Other characteristics include: 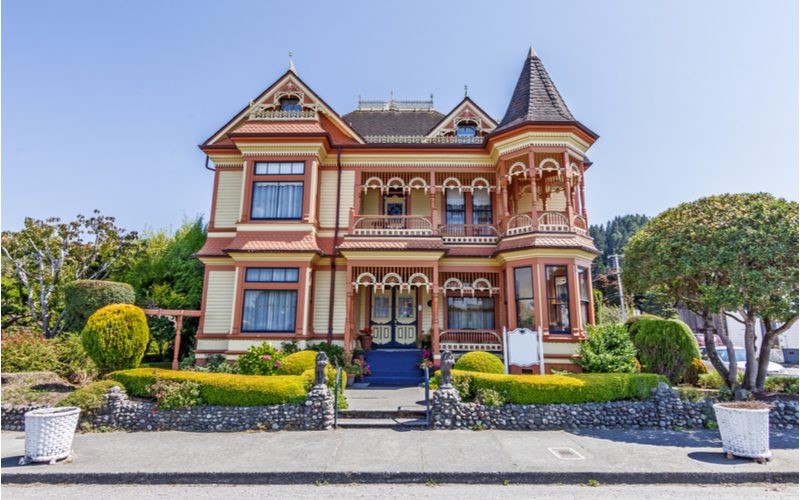 Here are some popular questions concerning the types of Victorian homes.

What City Has the Most Victorian Homes?

In the United States, you will find a lot of Victorian homes in Lawrence, Kansas. It has Folk Victorian and Queen Anne homes, as well as other historic English-style houses. You will also find gorgeous Victorian homes in Eureka, California, and New Hope, Pennsylvania.

What’s the Difference Between Victorian and Edwardian Homes?

In general, Victorian homes have these features:

Edwardian homes differ from Victorian ones as they feature:

How Much Do Victorian Homes Usually Cost?

The cost of a Victorian home varies drastically based on the condition, history, and location. One couple bought a Victorian home in Alabama for only $40,000 in 2014, but it needed extensive renovations.

If the property is in the National Register, you might end up paying millions for a house. For instance, this Victorian home costs over $2 million.

You can build a Victorian-style home from scratch for somewhere between $65,000-$350,000. However, it is challenging to get all of the intricate details of an authentic Victorian house.

Did Victorian Homes Have Crown Molding?

Many Victorian homes featured crown molding that framed the ceilings and showcased medallions and chandeliers. The crown molding was made from wood, plaster, or polyurethane and colored with glazes.

Do Victorian Homes Have Stained Glass?

Queen Anne-style homes often came with colorful stained glass. However, the average home in the Victorian era would not come with stained glass.

So, What are the Types of Victorian Homes?

The Victorian period lasted for nearly a century, so the architecture varied drastically in some regions. Nevertheless, most houses had some intricate details that provided the signature Victorian look.

If you are interested in Victorian homes, make sure to research the various types to see which one fits your tastes the most.