Roofs vary greatly depending on factors like house style, region, weather, and budget. To learn everything you could ever want to know about hip roof design, follow along to this ridiculously detailed guide.

What Is a Hip Roof?

In short, a hip roof is a particular style of roof that has a sloped angle on each side meeting in a hip on top. While it sounds simple, it’s not. There are actually 5 types of hip roofs, and a few features that make them the “hippest” of all roofs. 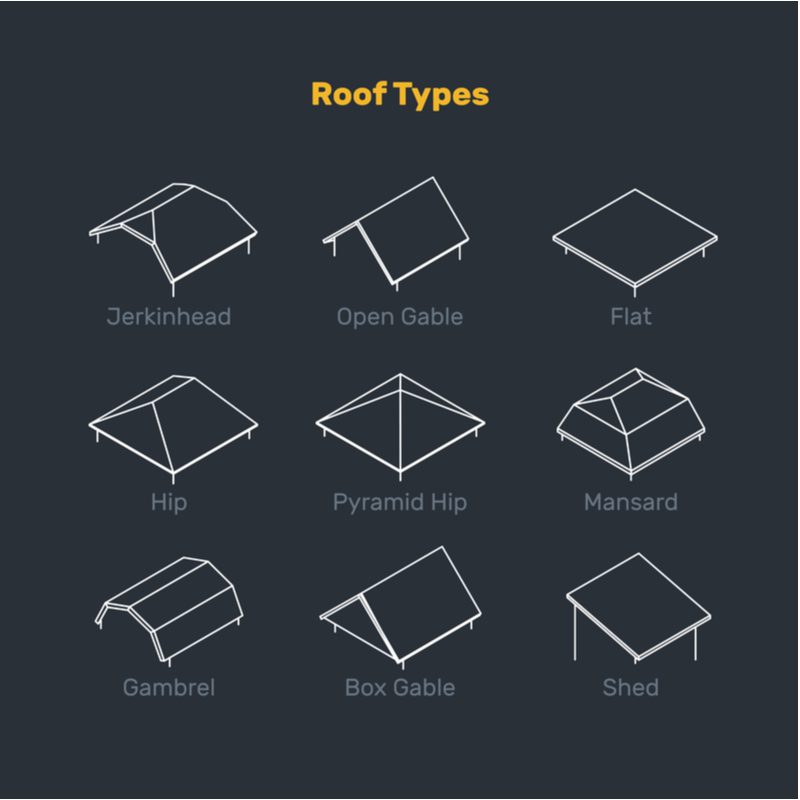 Let’s start with the basics. You want to know what a hip roof is, so let’s take a look at the structure and what parts of it are unique to other roof types.

If you were to drive around your neighborhood, chances are the majority of rooflines you’d see would be hip roofs. But what exactly makes it a hip roof? The answer is simple. The underlying structure of a hip roof is similar to that of a gable.

The interior structure of the roof is similar to that of a gable, but the hip end rafters are called jack rafters and there is the addition of the hip rafters.

There are five common styles of hip roofs:

The regular hip is the one described above. The pyramid hip is the same but instead of a ridge at the top, the roof sides meet in a single point.

This effect can be created by all sides of the roof being the same length or by deepening the angle of the hip ends to elongate them. The cross-hip and hip and valley are very similar to each other. The cross-hip is achieved by making an L-shaped roofline.

Imagine two hip roofs intersecting at a perpendicular angle to meet at the corner. This forms a roof with six angled sides, with still only two hip ends.

The hip and valley design also features intersecting rooflines, but they do not meet at the corner. This type of roof occurs when two hip roofs meet at a perpendicular angle, but only one roof is intersecting the other.

This forms a roof with seven sides. There are also three hip ends still visible as one roof is a complete hip roof, and the intersecting one is only cut off on one side.

The final variation on hip roofs is the half-hip. The half-hip is odd by most roofing standards. It is a mash-up of the hip roof and the gable roof. It looks like a gable roof.

But the two longer sides (the sides that a gable roof would have) extend down beyond the hip ends. This forms more overhang on the side of the roof without giving it a flat face like a gable.

Read Next: Trusses vs. Rafters

There are a lot of aspects to consider when trying to price a roof. The overall size, complexity, slope, materials, and more can be decisive factors in changing a roof cost. That said, you can expect to pay around $20,000-$50,000 for gable roofing on an average home.

Hip roofs have been around for centuries. They came to the U.S. in the 18th century but were commonplace in Italy and southern Europe long before that. Hip roofs can be found all over the world now, though they are more prevalent in Europe and North America.

Part of the reason for the hip roof’s popularity is due to its proven durability against all sorts of weather. The extreme slope of hip roofs is ideal for preventing snow build-up in northern climates.

The triangular structure also provides enough support so that if snow does build-up, the roof won’t collapse. Hip roofs are also resistant to high winds and rain. They are strong against torque from any angle because all sides are slanted.

The high slope of hip roofs helps negate the effects of forceful winds. By creating an angle away from the house, the wind can blow over, spiral around, and encircle the house without pushing too much on one side.

If the roof were flatter, it would simply act as another surface for the wind to butt against. A sloped roof creates a rounder shape to the house, making an easy path for the wind to follow. This is vital when strong winds blow.

If the roof is too flat, the wind air that comes up the sides of the house will rush down against the roof, creating a vacuum rather than slipping over it.

Overall, hip roofs have better load-bearing support and strength against extreme weather. They are the safest option for hurricane, tornado, or blizzard-prone areas. 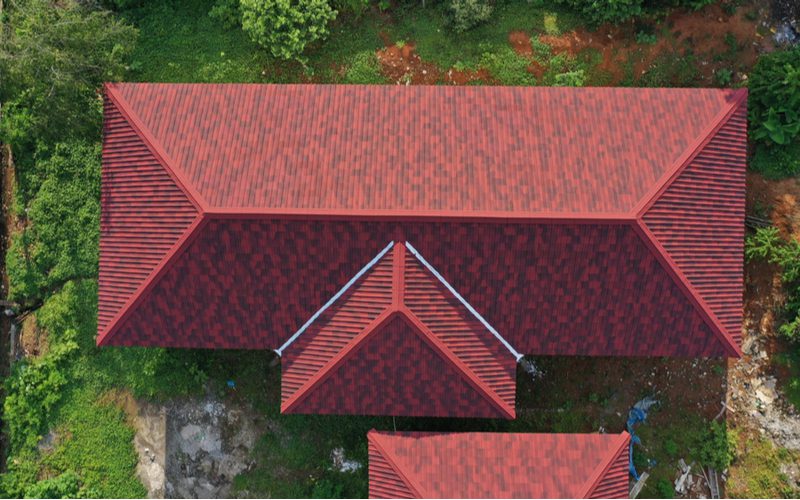 While hip roofs are some of the best designs for several reasons, they also have their downsides. Let’s take a look at all the pros and cons of hip roofs, so you can get a better sense of how they compare to other styles. 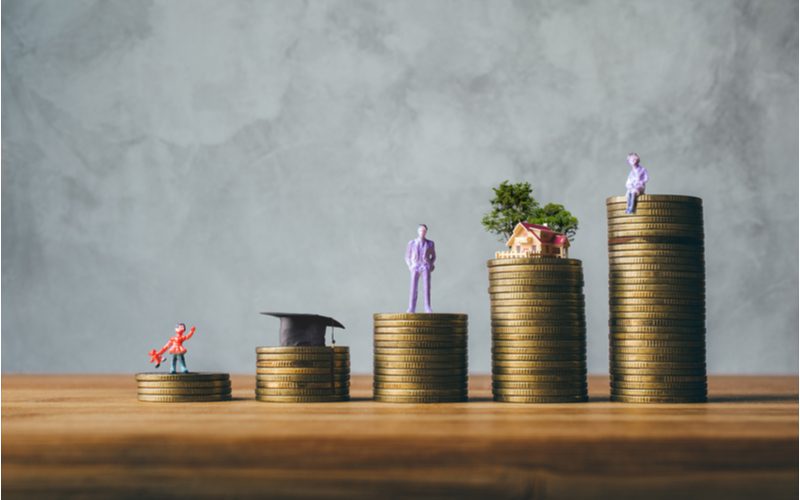 Just when you thought you’d run out of things to learn about hip roofs, there’s a bonus section. This is the guide that keeps on giving! You already know that hip roofs are great for weather, are strong, and look cool, but did you know they can also have insurance benefits?

That’s right; if you live in a hurricane-prone area, your insurance company may give you a discount for owning a home with a hip roof.

Whether you are building a home, buying, or planning to change the roof, you may be eligible for up to a 32% discount on insurance. You can have a wind mitigation report performed to gauge if you’re eligible for a discount if you already live in a home with a hip roof.

Some insurance companies provide this discount because hip roofs make so much difference against hurricanes that it’s worth it. Another fact you may not yet know about hip roofs is that they are easy to build.

Unlike gable roofs that require extra bracing, or more complex roofs that can span several floors and styles of room, hip roofs are relatively simple to make.

They are four-sided, relatively symmetrical structures with a flat base. Each side is built in the same manner and can be finished the same way. They cost more to make, thanks to the need for more materials.

Finally, because of the open attic space and four sloped sides, hip roofs are some of the most energy-efficient roofs.

They deflect sun, wind, and snow, keeping the outside of the house protected. The inside space helps regulate temperature as well by giving hot air a place to vent in the summer and insulating with a pocket of warm air in the winter.

Read Next: How to Get Insurance to Pay for Roof Replacement 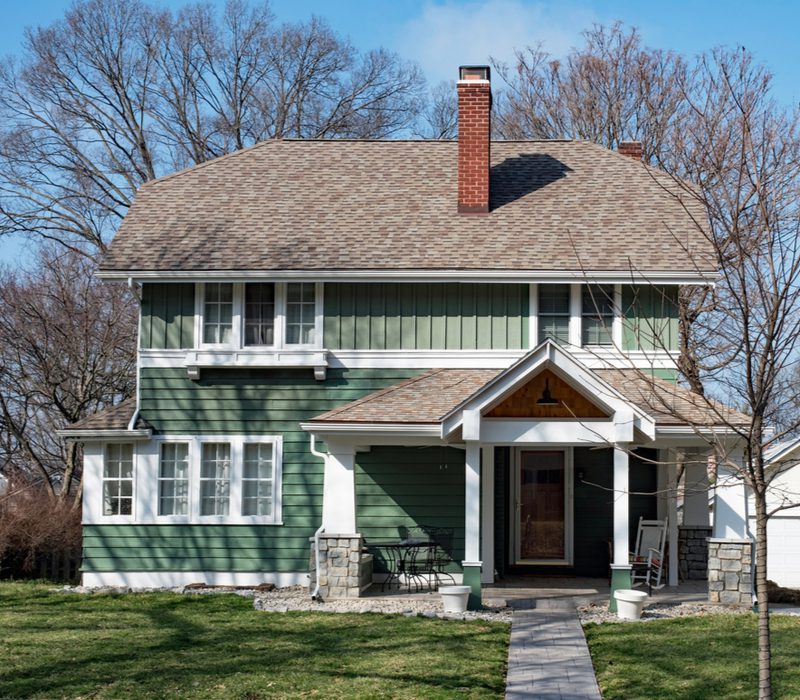 Whether you are looking to buy, build, or modify a home, there are several things to consider about hip roofs before investing.

Most hip roof designs require ceiling joists, but some like square or pyramid hip roofs don’t always need them. The inner structure of the roof is self-supporting.

Which is better: gable or hip roof?

While gable roofs are cheaper, hip roofs are better overall. They provide more resilience against harsh weather, are stronger, and are easier to build. They can have issues with ventilation and leaking, but in every other aspect, they are superior.

What is a hip on the roof?

The hip is the point at the roof where the sides meet; the angled corners where each sloped side touches. The shorter sloped sides are called the hip ends, and the peak is the ridge.

Is a hip roof strong?

Hip roofs are the strongest roofs aside from domes. They implement triangles in every aspect of their structure, providing a very stable base. The angle of the slope also dictates the level of strength, but they are more durable against the wind than any other residential roof.

Is hip roof cheaper than gable?

And with this, you’ve reached the end of this insanely detailed guide to hip roofs. You know everything there is to know. Hip roofs are a great option if you are looking for strength, resilience, weatherproofing, and style all at an affordable price.