Two types of structures that hold roofs up and support them against the elements: trusses and rafters. When it comes to trusses vs. rafters, though, there are some differences. Read on to learn what these are.

Trusses vs. Rafters: The Main Differences

If you’ve ever seen a house’s framing or the structure underneath your own roof, you’ve seen either trusses or rafters. While trusses and rafters can both produce similar appearances in the roofs they support, they have very different functions and carry different results for roofing.

The differences in trusses vs. rafters deal with how each is built and installed on a given structure. Both serve as support for roofing

Trusses are prefabricated, triangular wooden structures that create a weblike system on which to build a roof. Builders have them delivered to the construction site and install them at even intervals across the top of the building.

Rafters are flat pieces of wood that run from the top of the building’s walls to a central peak or ridge in the roofline. Unlike trusses, construction companies measure, cut, and install each one on-site as required.

When to Use Trusses vs. Rafters

Rafters and trusses don’t just have different constructions from one another. One of the biggest differences between the two is their preparation and installation. 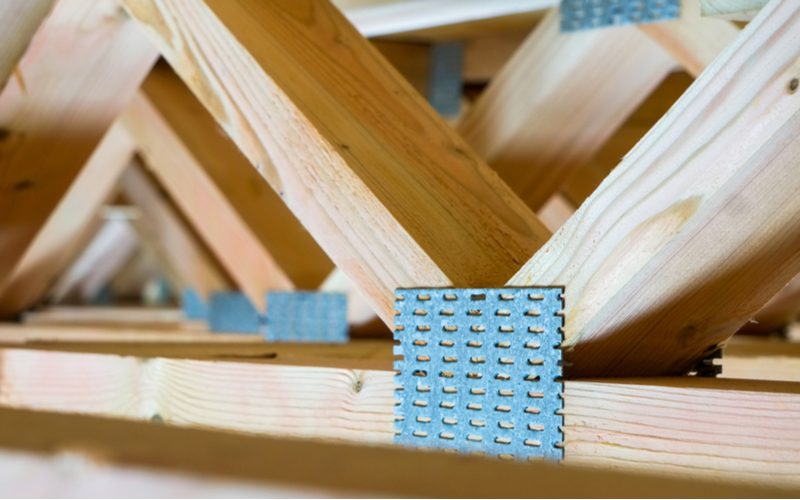 Roofs use trusses because they’re cheaper, sturdier, and easier to install than rafters. Trusses also work well when the building doesn’t require lots of attic space.

There are many different types of trusses for all types of structures, but wooden roof trusses for residential housing use two-by-fours attached edge-on. That makes them narrower than rafters, which use wider boards installed flat.

Such a design would make trusses less stable than rafters were it not for the boards that make up their inner webbing. Those boards compensate for trusses’ relative weakness and make it so they can support the roof’s full weight better than rafters. 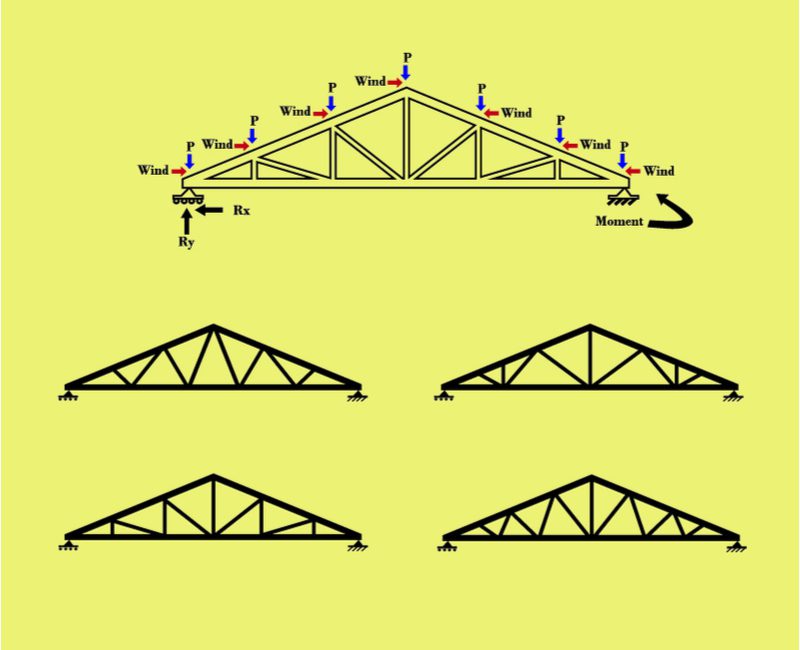 Factories that build trusses cut them quite carefully and often to specific measurements, which means builders can get customized trusses that fit their project in a very precise manner with a lot less work. As such, they’re a cheaper alternative to rafters.

Other advantages of trusses include:

Trusses have their drawbacks, too, though. First off, they limit ceiling design. For instance, your house requires scissor trusses for vaulted ceilings. You can find that in new construction, but you’ll spend a pretty penny if you want to vault your ceilings but don’t have scissor trusses or rafters.

They also limit your attic space, making storing or installing anything of substantial size challenging. Furthermore, trusses make it harder to do things like accessing your walls from above because you can’t move among them easily. 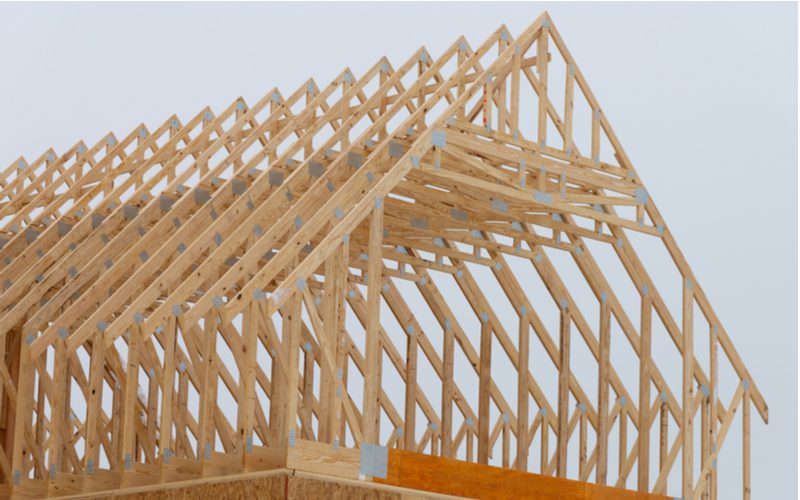 Rafters work well in buildings that demand good storage space in the attic area when you have special considerations that make trusses problematic, and for small structures like sheds. While trusses are built in factories, rafters are individual boards that builders measure, cut, and install one-by-one on-site.

They’re more labor-intensive and use more wood, making them more expensive to install than trusses. Also, since they get measured and cut on-site, they require less planning time than trusses. If necessary, builders can install rafters with minimal advanced planning.

Rafters come with their own set of disadvantages, though. For instance, it can take a couple of weeks to build a roof using rafters, whereas it might only take a couple of days to do so using trusses.

Since they’re made on-site, it’s easier to make mistakes with them than with trusses. Rafters are also more susceptible to the elements while builders are putting them together because they’re assembled on-site instead of indoors under the controlled conditions of a factory.

Unless you’re a carpenter yourself, you need a licensed contractor to build rafters because they’re so complicated and require some serious expertise. You can install small trusses yourself if you’re handy, have equally handy people to help, and know how to stay safe while you’re working. 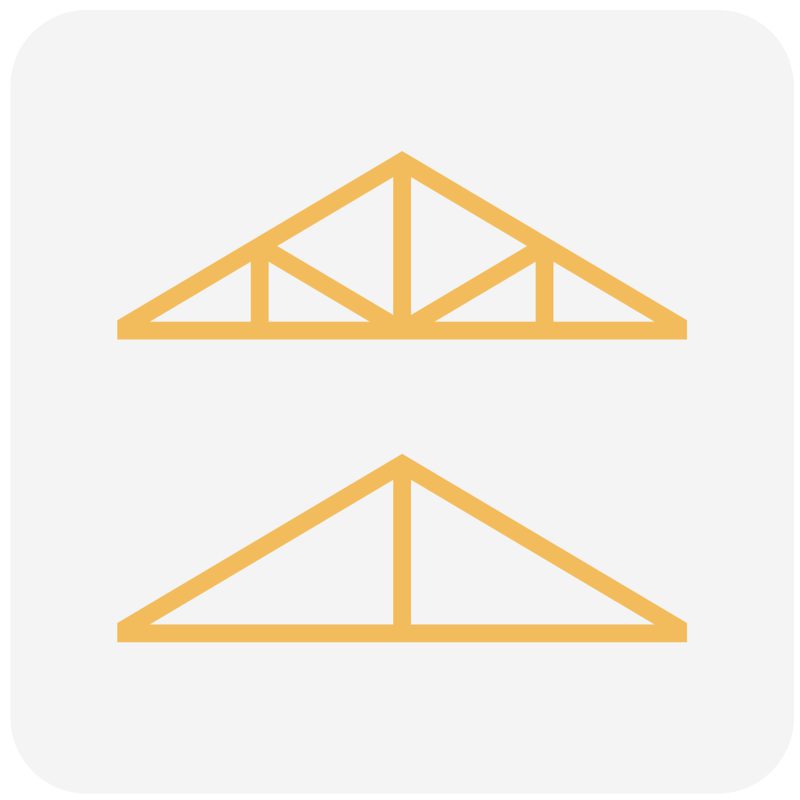 The differences in trusses vs. rafters might seem numerous, but they have similarities that go well beyond merely supporting a roof.

A building’s structure must support two types of loads: live loads and dead loads. Dead loads are ones that don’t change, such as the weight of a house on its floor joists and foundation. Live loads change with use and other varying factors.

Roofs, specifically, deal with live loads that include the weather. Trusses and rafters must have sufficient strength and stiffness to withstand what Mother Nature throws at them during a typical year.

Under extreme circumstances, such as an unusually warm but snowy winter, ice and snow can weigh a roof down to the point where the rafters and trusses begin to fail. Don’t worry; this is the exception, not the rule, and there are ways to mitigate this particular problem if necessary.

The wind is another live load that roofs must withstand. However, in areas where high winds are problematic, such as Tornado Alley and hurricane-prone areas, roofs using either trusses or rafters must follow specific guidelines.

Many localities have requirements in their building codes, but there are also some universal considerations, including:

Damaged roofs in high-wind areas, whether trussed or using rafters, may undergo load testing to determine where and how they failed under the pressure of the winds.

Contractors generally do that before performing repairs or rebuilding. They might also use the results to adapt their building methods so new roofs can better withstand high winds.

Many areas have a minimum required roof slope so that water can run off, and snow has a more difficult time piling up. Flat roofs tend to have problems with pooling water, which means they’re more susceptible to water damage than well-built sloped roofs.

Both trusses and rafters create a sloped roof. Local and state building codes determine the minimum slope angle for a residential roof, taking into account the amount of rain, snow, and wind the area typically gets. 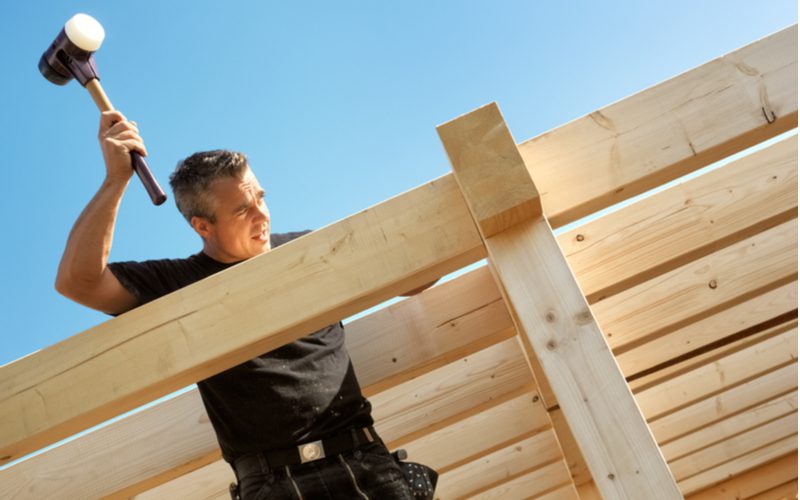 Here are answers to some of the most frequently asked questions about trusses vs. rafters.

How Much Do Trusses Cost vs. Rafters?

It depends on the type of truss you want, but generally, you can expect to pay anywhere from $35 to $400 per truss. However, that’s just for the trusses. You also have to pay for lifting equipment like a crane, labor, and waste disposal (although trusses produce very little waste).

You’ll spend considerably more on labor and waste disposal, but you don’t have to worry about things like cranes. For a 1,500 square foot roof, rafters will run anywhere between $10,500 and $24,000.

Is There A Way to Create a Vaulted Ceiling With Regular Trusses?

The short answer to that question is no. You need to replace each truss individually with either a scissor truss or rafters to do it. For most people, this is an extremely expensive home modification.

If you’ve got money to burn, you can do it, but if you must operate on a budget, then putting in vaulted ceilings when you have regular trusses will probably cost too much.

So How are Trusses and Rafters Different?

Trusses are prefabricated roof structures that are easy to install on most buildings with sloped roofs. Rafters are boards that are typically wider than those used in trusses, are cut and installed individually at the job site, and run from a central ridge to the outside walls of the building.

Whether you have rafters or trusses depends on various factors, including where you live and how old your home is. Both provide excellent support for a roof. However, rafters are considerably more expensive than trusses, while trusses have certain limitations that rafters don’t.