Wondering what an American Tudor house is? Don’t worry — you’re on the right page. We’ll show you a little bit of history, why they’re so popular, where they are commonly found, and much more in our guide below.

What Is an American Tudor House?

Dating back to the 15th century but not enjoying wide popularity until the late 1800s, the American Tudor house has a distinctive look—contrasting colors, multiple building materials, and Medieval touches that lend gravitas to the building.

As housing for the masses, the Tudor-style home became less common after World War II, but they still appear in American neighborhoods today.

These three elements constitute the most recognizable parts of the American Tudor house. Black or brown timbers frame the cream-colored stucco of the house’s exterior walls, and they sit beneath a roof with a steep pitch. 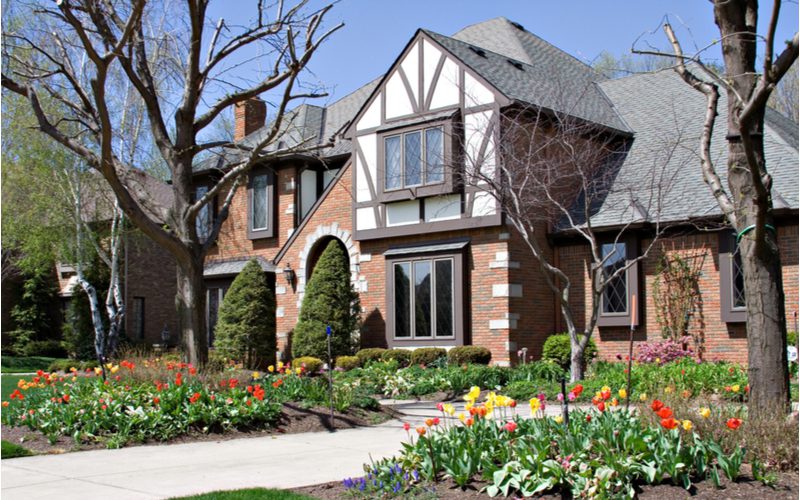 Nearly everything about the style manifests on the outside of the building. While there’s not a set rulebook for building one of these charming homes, they all share at least a few characteristics.

A house having a steep roof isn’t automatically a Tudor, though, so “a few” means “more than one,” and usually, without the stucco and trim, it won’t be a Tudor.

Tudor homes are almost always two-story buildings. This matters because typically, the second story sports the stucco walls. Builders in the past used stone or brick for the first-floor walls then used the stucco and a wood framework which gives the house its iconic look.

That style has continued to the present, so we often see mixed materials—brick on the bottom, and stucco on top, for example.

The timbers that used to serve as construction elements now do not need to function as part of the home’s frame, so they have mainly become decorative, meaning many Tudor homes have distinctive patterns made with these timbers.

Read Next: What Is Stucco?

A gabled roof built at a steep angle tops off the American Tudor house. Less expensive to make than a hip roof and a bit closer to being snow-proof, the gabled roof runs the length of the house with dormers facing the front.

The steep pitch originated from a desire to shed as much snow as possible to keep the roof from collapsing under the weight of a heavy winter storm.

Modern-day England sees an average of 15 or so days of snow annually, but some places in the U.K. can have as many as 76 days of snowfall.

So building a steep pitch into the roof was a way to help protect the structure from heavy snowfall. In the old days, the roof was also thatched, but that’s pretty rare these days. The thatching comes from the origins of this house style.

The Tudor dynasty in England lasted from 1485 when Henry VII founded it after the War of the Roses. It lasted until the death of Elizabeth I in 1603. During that time, many English built timber-framed cottages with thatched roofs.

Long after the Tudors had ceased to be, architects in the United States revived the style in the late 19th century, which is why American Tudor houses are considered Tudor Revival architecture.

The interior of a Tudor house often has multiple fireplaces and an asymmetrical floor plan, but again, the bulk of the house’s style manifests in the outward appearance of the building.

Tudor houses often present an impressive front entry that makes a definite statement. Those entryways often have a batten door as the main entry into the home.

While the batten was just some boards nailed together in the old days, there are more secure and more energy-efficient incarnations today. But the look of a batten door is unmistakably Tudor.

The hinges were straps in the past, so today’s Tudor houses often have strap hinges holding the door on the frame. These hinges are metal but mimic the look of those leather straps you see on some buildings in “Game of Thrones.”

The door also has a rounded or pointed top—you rarely see a Tudor house with a straight-up rectangle for a front door. This feature is a nod to Medieval architecture and helps lend a sense of grandiosity to the entryway.

Finally, the doorway itself usually has some embellishment on it, whether that be stone accents around the entryway or a thick masonry structure built out from the house. This serves an aesthetic purpose but can also protect people in the doorway from the weather.

Leaded glass is pretty rare in houses these days but used to be a hallmark of a Tudor-style home. While you may find the occasional leaded pane here and there, you will more likely encounter Tudor home with multi-paned windows, the panes sometimes arranged in a diamond pattern.

While single- and double-hung windows are common, almost every American Tudor house has at least one set of casement windows, often in the windows in the dormers.

Years ago, wood-framed windows with leaded glass were laughably inefficient, but window manufacturers today create windows that look the part and keep the hot air in or out, depending on the season.

We mentioned stone accents sometimes surrounding the front entryway, but you can also find some accents on the corners of the building or surrounding window frames.

This can look especially good when the house’s first floor is brick—the lighter stone accent will stand out well and coordinate with the lighter shade of the stucco above.

Not quite as common as a batten door, the cantilevered balcony often protrudes from somewhere on the second story (or third, if there is one) of the American Tudor house.

These balconies make further use of the wooden timbers, otherwise decorating the home. They came into fashion when homes were built close to the street and couldn’t jut out into it.

However, the balconies could stick out further since they were higher off the ground and out of the way of pedestrians, horses, and other modes of transportation.

Since the Tudor house typically has multiple fireplaces, it stands to reason that the chimney comes out as a pretty important piece of architecture.

American Tudor houses usually have chimneys that go far beyond being just functional. Often built from brick, the chimneys can have quite ornate patterns built into them and rise impressively above the house.

They usually have a decorative chimney pot sitting on top of them—essentially a hat for the chimney that adds a little height to the chimney and helps keep rain and debris out of it. 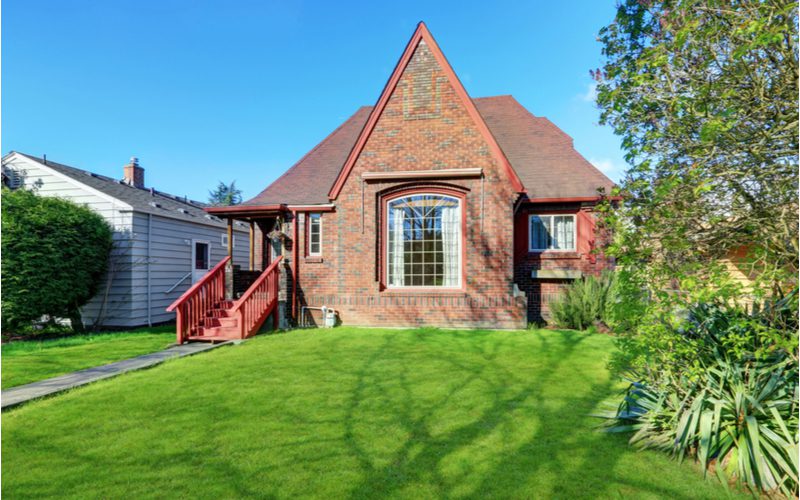 So many things go into making a house fit any style, and the American Tudor home is no exception. While we can’t answer every conceivable question in this space, here are some more common ones.

Is Tudor English or German?

As the name implies, the style originated during the reign of the Tudor dynasty, a pillar of English history. While homes in Germany look like part of the Tudor tradition, these homes are actually fachwerk construction.

Fachwerk homes resemble Tudors in that they use timber construction, but the similarities end there. Tudor homes come directly from the British countryside beginning in the late 15th century.

Why are Tudor houses black and white?

While American Tudor houses often lean toward being brown and white, the black and white look stands as the original, and one could argue that the brown is a softer offshoot of the original black.

Tudor homes now feature walls built from stucco and timbers, but before stucco in its modern form existed, the walls were constructed from wattle and daub and timbers.

Today, as we’ve mentioned, the timbers are often half-timbers and aren’t intrinsic to the structural stability of the building.

But in the 15th century, when stucco didn’t exist, wattle—a lattice of smaller timbers—and daub—a mixture of straw, mud, and lime covering the wattle, holding it in place, and binding it together—made up the walls of the Tudor home.

The presence of straw and lime lent a lighter color to the walls, so cream-colored or white walls now serve as a hallmark of the style. The exposed timbers that held the walls together and gave the Tudor house its distinctive look needed protection from the elements.

So people covered them with pitch or tar, which was black. Back then, the color scheme wasn’t a design choice so much as it was a by-product of construction.

Tudor houses, in general, are about two and a half times more expensive than the average U.S. home. The higher price tag partially explains why Tudor homes dipped in popularity in the post-WWII era.

When Bry Higgins patented stucco in 1779, he gave the world a terrific new construction material and technique, but once masonry advanced 100 years later, stucco turned out to be less affordable.

With the Baby Boom that followed the war, Americans needed affordable homes that could go up relatively quickly, and neither of those attributes applied much to the American Tudor house.

Of course, they haven’t gone extinct, but farmhouse, ranch, and craftsman homes appear much more often in American neighborhoods.

The answer to this question is a little tricky. Technically, no, Tudor houses are not Victorian because those are two eras are separated by more than 200 years. The Tudor house originated in the Tudor era.

However, the revival of the style came into vogue in the Victorian era.

So, in that sense, the Tudor home has ties to the period. You’d be technically wrong if you called a Tudor home Victorian, but there would also be an element of truth to what you said.

When did Tudor-style houses originate?

We have no historical documents to say that the first Tudor house was built on this specific date. But we do know that by the 16th century, they stood throughout England.

The revival of the style began in the United States in 1890. We were approaching the Gilded Age, and money and luxury were everywhere.

The Great Depression put a dent in those things, and by the end of World War II, as already discussed, their popularity had shifted to less expensive home styles.

So, What Is an American Tudor House?

An American Tudor house is a style of homebuilding with a distinctive look that was once very popular but has fallen on the list of most common house styles due to its higher construction costs.