If you want to spice up your dull grey house, here are 15 design ideas and inspirations to help you come up with your own design. From shutters that pop to more muted tones, We’ve gathered the best grey houses with shutters to help you find your inspiration.

Grey houses don’t have to be modern or boring. They can have a cozy appeal, a more colonial look, or even victorian!

Shutters are typical of historic houses, and adding a touch of grey can help your home stand out without relying on old-fashioned colors while retaining a neutral palette. Shutters can add a wonderful pop of color or accent the grey with darker tones. 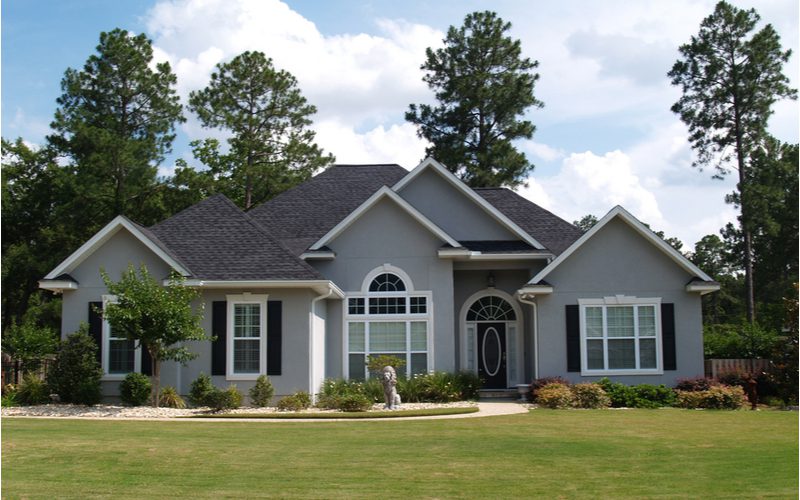 This house knows what it’s doing with its colors. The cool grey is a lighter tone, giving the house a modern feel while retaining some elegant art deco touches. The dark shutters pop against the lighter tones giving some much-needed balance to the house’s layout. 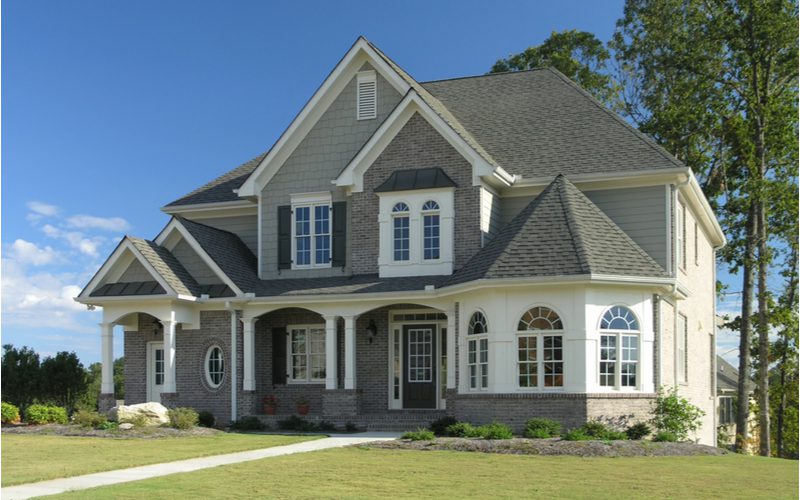 What this house is doing with texture is really interesting. It matches different shades of grey with different textures on the house’s siding, creating an interesting canvas.

The dark gray shutters complement these lighter shades nicely without overpowering them, giving just the right amount of accent color to the places that need it to keep the front of the house interesting but not overwhelming. 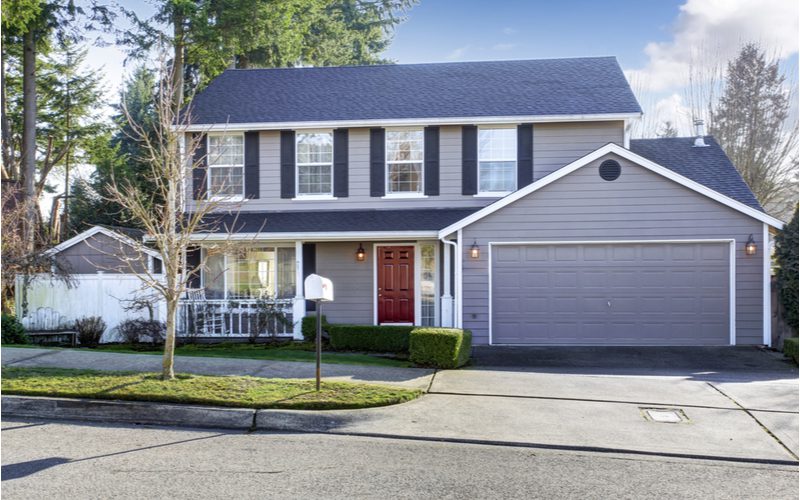 This house has blue shutters on its French windows that are a nice pop against the warm grey of the exterior. Typically, you shouldn’t mix cool colors with warm greys, but the chosen palette works nicely here, especially when paired with the front door that works with the warm grey. 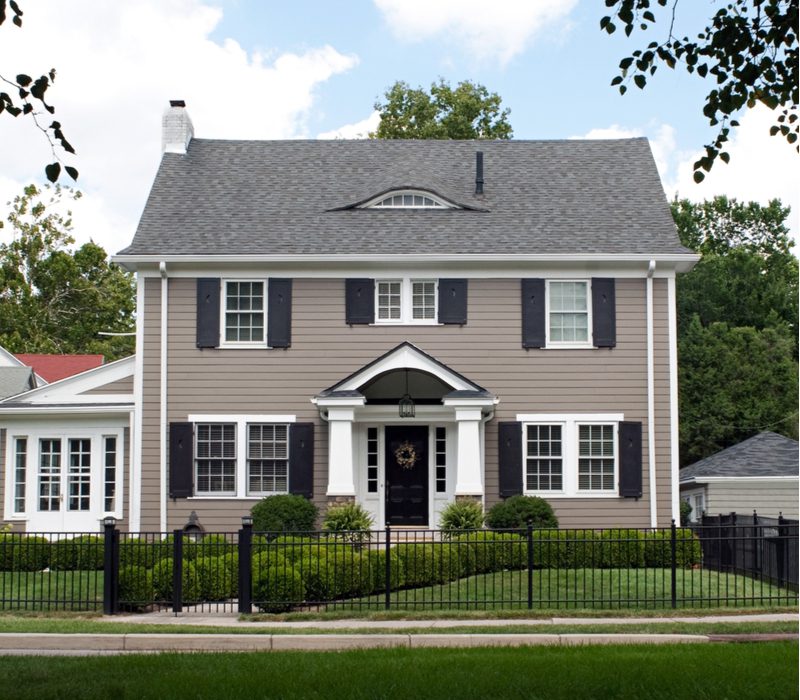 The warm grey of the siding gives the house a nice inviting feel while also staying dignified. It’s fantastic with the black shutters that almost make the house feel like it is dressed up for a semi-formal social function. 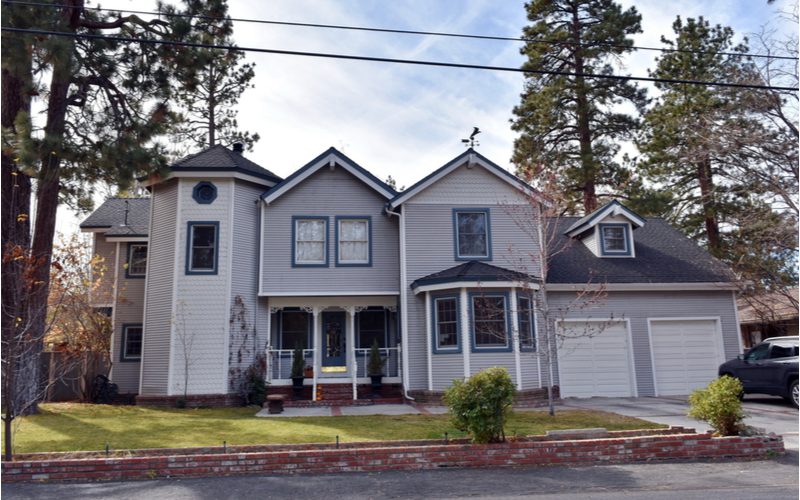 While this house doesn’t have shutters per se, the same effect can be easily achieved with light blue shutters—the light blue pops against the light grey, giving the house a surprising, almost refreshing feeling. 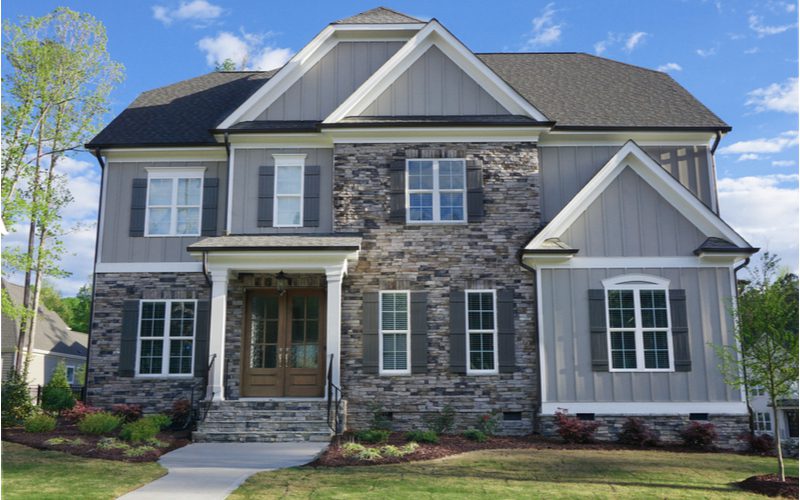 This house has an intriguing mixture of stone and aluminum siding, and when paired with the wooden shutters, it creates an interesting collage of materials and textures. The dark grey shutters go nicely with the varying shades of stone and light grey of the aluminum, creating consistency throughout the face of the house. 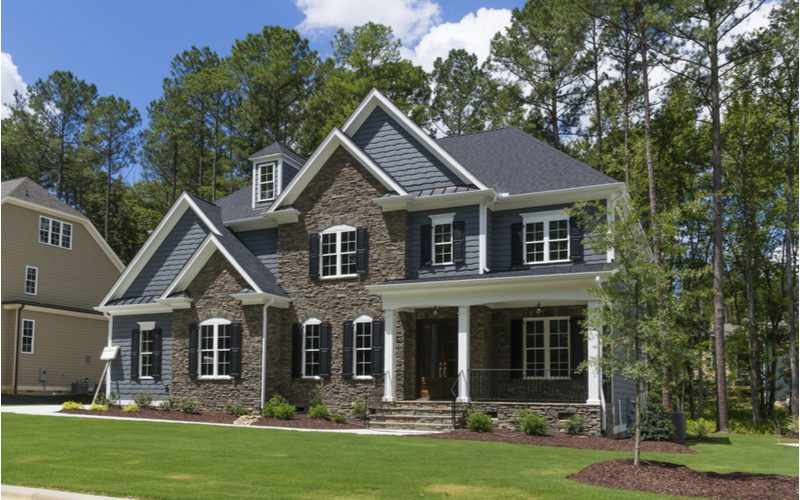 This house also has some different textures, but we’re more in love with the colors. The light grey stone helps the dark blue of the shutters pop against the side.

The wavy siding almost mimics how the stone looks but adds a deeper tone to the front of the house, adding depth and helping the stone pop.

8. Warm and Neutral Gray With Stone and Wooden Slat Shutters 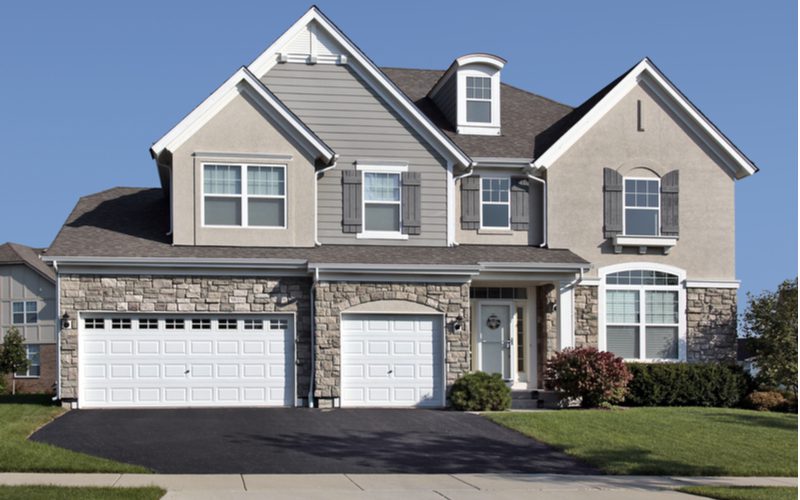 You might have noticed a lot of these houses playing with different grey textures to give more personality to their faces. This one also plays with texture, but we like how they played with different tones of grey to give their house a more varied look.

All of the colors used on this house are grey, yet they each emanate a different feeling that works together to create an interesting and varied curb appeal. 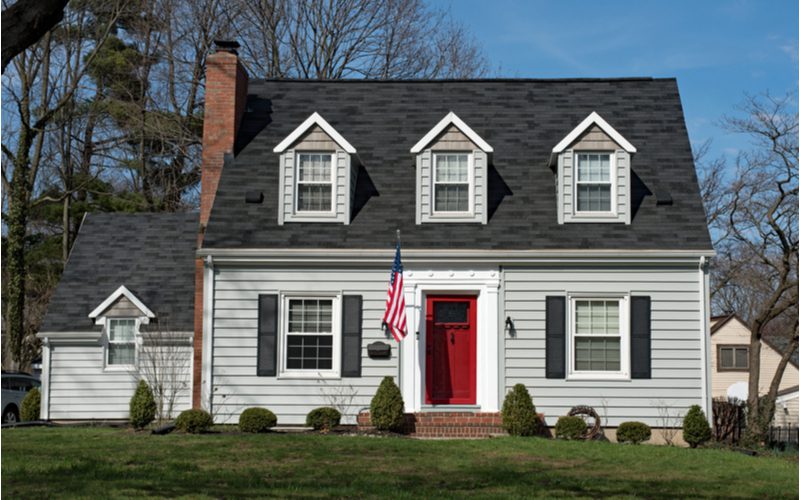 This house is just the lightest touch of grey, and the black shutters and red door creates a classic historical feeling. 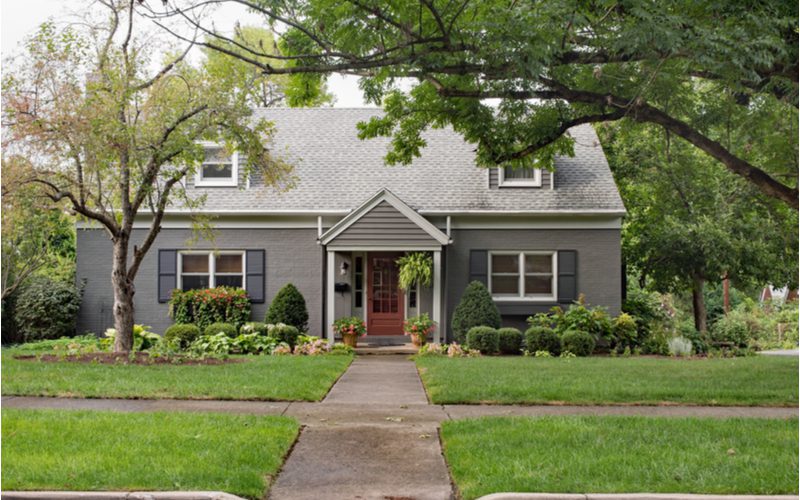 This simple, understated house may not pop much from the curb but simply oozes class and sophistication. While choosing all dark colors is an unconventional choice, they managed to pull it off with aplomb.

The grey is a true neutral that goes well with cool and warm colors, so it keeps the shutters and door from popping, creating a simplistic toned-down appeal. 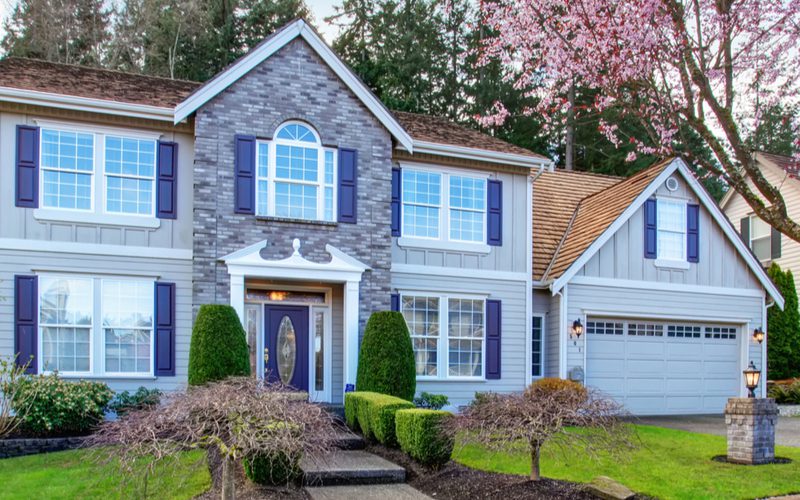 This house is another interesting play on textures and accent colors. Their chosen accent color, a stately blue, perfectly compliments all of the light grays featured and especially pops against the warm greys of the aluminum and siding. 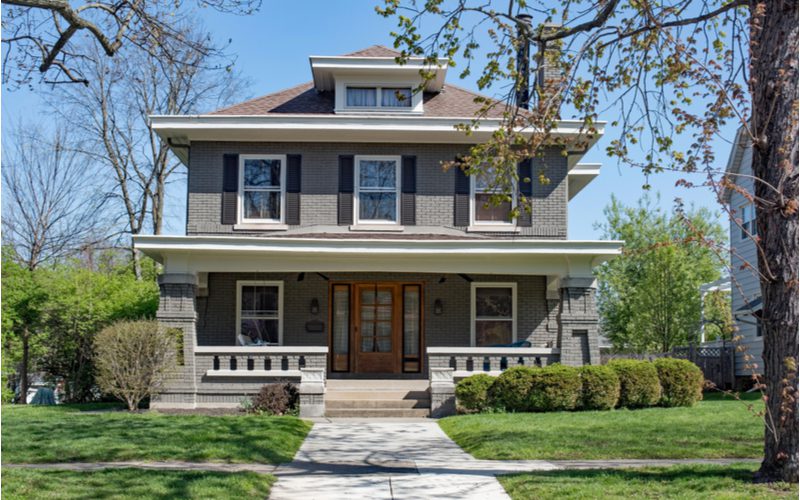 The color and the shutters don’t detract from the main draw of this house: the gorgeous porch. Your first look at the porch, then take in the rest of the house, which isn’t overdone to let you linger on the architectural decisions.

However, it still looks great, a simple dark grey on a neutral mid-grey. It’s important to highlight the architectural pieces of your home, and that’s what the grey does here. 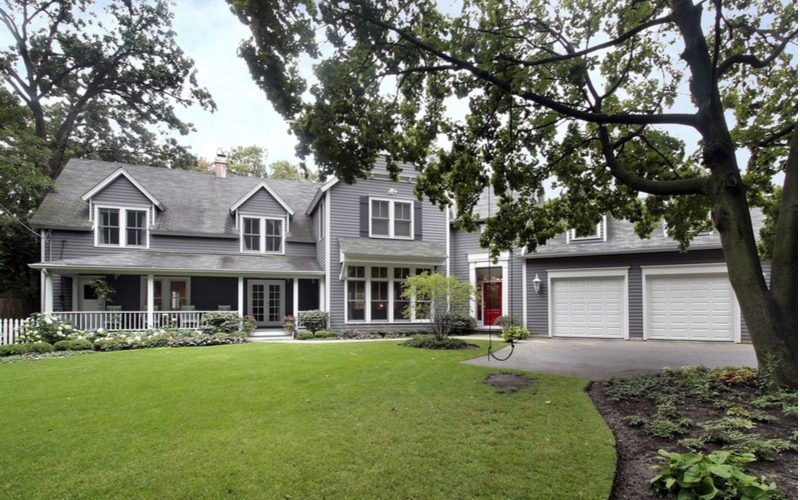 This home simultaneously looks luxurious and modern, yet understated and historical, because they used the elements of grey well.

The grey siding gives the house a contemporary feel, while the wooden shutters make it feel historical, driving its luxurious feeling. And yet the simple color palette doesn’t overwhelm the viewers with what is a huge house, the grey almost giving it a “slimming” effect. 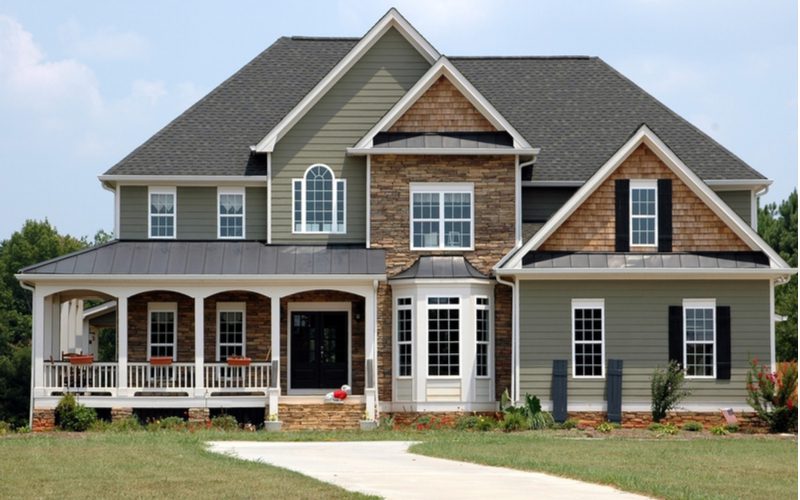 Colors and textures abound in this stunning home, and the plays between the brown stone textures and warm grey siding are what draw your eye here. 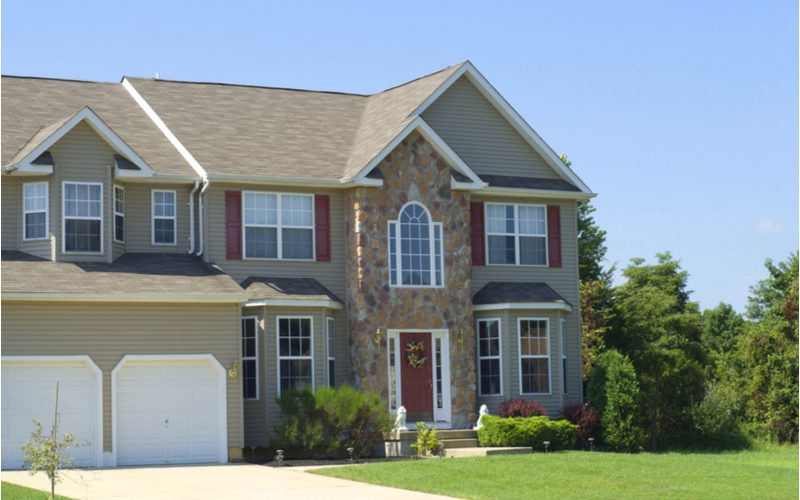 The pop of color in the shutters is what makes this warm-colored housework. Between the warm grey siding and the brown stone, they look gorgeous and give the house a lot of curb appeal.

What color should shutters be on a grey house?

Warm red shutters, cool blue shutters, and cream or white shutters look great on a grey house. Grey is one of the most versatile colors you can pair with, so don’t be afraid to get creative.

What accent colors should you use with a grey house?

It depends on the undertones in your shade of grey, but generally for cooler shades blue, green, and purple, and warmer shades red, pink, or yellow.

Should shutters be darker than my house?

Should my shutters and doors match colors?

Not necessarily. Ultimately it depends on the look you’re going for. While matching the accent colors can lead to a more cohesive look, mixing and matching the colors can create some interesting synergy for curb appeal.

No, while some styles of shutters have fallen out of fashion (stained wooden shutters, for example), shutters as a whole continue. They can help give a house a nice splash of extra color, a more historical, colonial look, or just tie an entire home together.

What Do You Think?

Grey houses don’t need to be boring, and shutters can be just that extra something your home needs to take it up a notch. You have many options, like playing with different tones of grey, playing with the textures of your house, or even playing with the accent colors on your shutters and door.

Grey houses with shutters can bring a lot of curb appeal to the table and is something you should consider for the design of your home.