Is it a good idea to have a ceiling fan in the kitchen?

While there may be restrictions on installing a ceiling fan in your kitchen, it is a good idea, depending on the layout of your house. There are benefits and things you should know about kitchen ceiling fans before committing to your decision.

Most people might agree that it is way too hot in the summer months to cook—but could a ceiling fan be the solution to all your problems, or will it cause more trouble? We’ll cover all of this and more below, so read on.

Benefits of Having a Kitchen Ceiling Fan 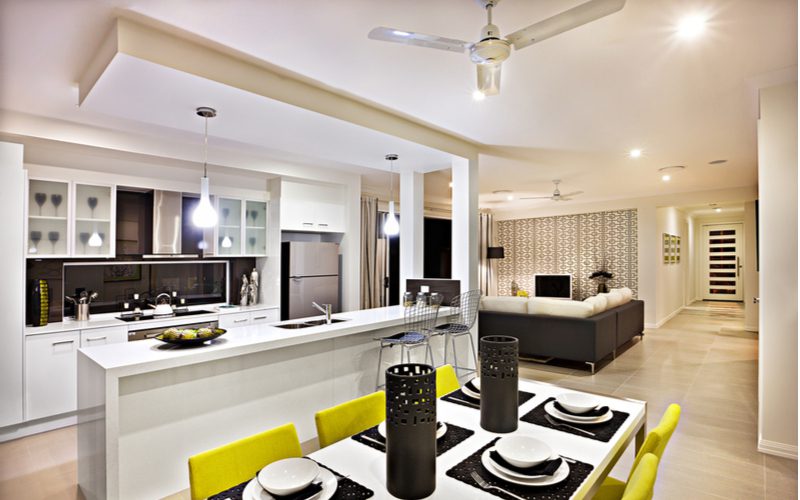 Features to finding the best ceiling fan for your kitchen make all the difference. One thing most ceiling fans have in common are mentioned below:

Most air conditioners and heating appliances use three to five percent more energy than a ceiling fan. A ceiling fan costs very little to run and gives you a four-degree temperature decrease.

With a ceiling fan, you can choose multiple speeds and the direction in which to push the air. With this effect, an air conditioner or other cooling device is needed less, which will help you save on costs during the summer months.

During the winter months, you can use your fan to help circulate the stagnant air left behind from odors and closed windows. So, the costs in the winter go down as well due to how much your fan will circulate the air. Other things that matter are:

The cubic feet per minute (CFM) description on the box will help you determine how much airflow the fan pushes out. A higher number means more airflow. While noise may bother some people, it’s not the mechanical drone of an air conditioner but the swishing of air movement. Fewer ridges, bumps, and texture, make less noise.

Summer months can be uncomfortably warm. Ceiling fans decrease the indoor temperature by at least four to five degrees. While an air conditioner may be more comforting, a ceiling fan circulates the air more efficiently.

Just like summer, winter months can be uncomfortably cold, and with all windows closed and the heat on high, the air becomes stagnant quickly.

Keeps Flies and Flying Pests Away

Constant movement, air circulation, and swooshing noise make a 75% decrease in flying insects. Flying insects prefer stagnant air or calm wind movements. A ceiling fan makes their wings dispel more, ultimately keeping them away, so they don’t have to work as hard.

Most stand-up fans draw air through one side and push air out through the other. The circulation of the fan depends on how much odor is decreased through the process of the machine. Ceiling fans push air down (depending on the direction you choose) and out of the room as it turns in a tornado-like motion. 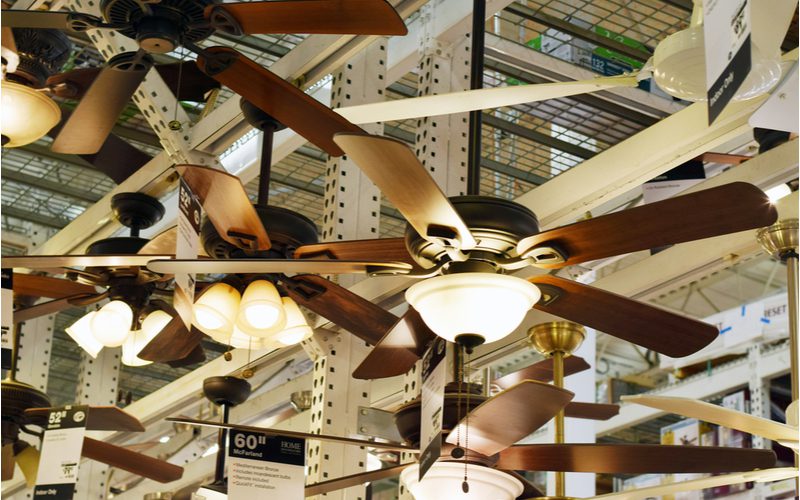 Finding the perfect fan can be extremely difficult. There are all these questions ruminating through one’s mind. How big does it need to be? Where will it be placed?

How much air does the household need? Does it need a light fixture? Will it compliment my kitchen? Let’s take a detailed look at the types of ceiling fans there are.

Take a look at your kitchen. How big is it? If you have a small kitchen, you’re going to opt for shorter bladed fans. Longer bladed fans are for larger rooms as they generate more airflow for larger spaces. Then again, the motor is the power behind how much airflow the fan can push out.

Light vs. No Light

Remote vs. No Remote

Some ceiling fans come with a remote to control certain times when the fan turns on or off. If you’re a busy person, a control may be your best option, as you can also switch the speed and function from sitting down.

The main difference between a DC motor and an AC motor is the voltage of the battery. A DC fan is fixed, ranging from 5V to 48V. An AC motor fan is an ever-changing voltage ranging from 100VAC to 240VAC.

DC fans are more energy-efficient, quieter, and use less voltage. AC fans use more energy to run but cool down and circulate air quicker.

Things to Consider Before Installing a Ceiling Fan in the Kitchen 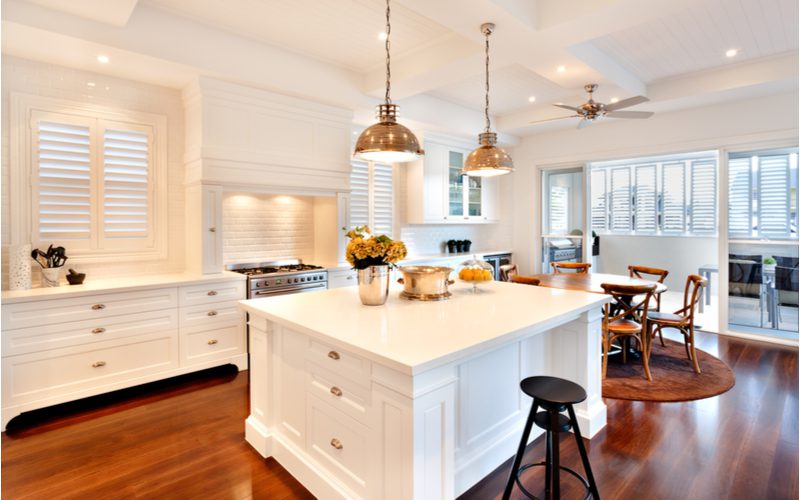 Imagine you’re standing in your kitchen (or go actually do that). Find a place where you envision a ceiling fan would look the best. Now, envision the exact type of fan you chose to fit in the spot you chose.

You’re all set — but wait! There are a few things you should consider first, such as:

In short, what you need to consider before committing, is size, style, and location. Here are a few things you should know first:

To get the most benefits from a ceiling fan in your kitchen, you need to check the airflow ratings. The higher the rating, the more the fan does its job by circulating enough air for your kitchen.

2. Ensure the fan is the right size for your kitchen

Too big of a fan, and you’ll run into problems such as noise, too cold or windy, more costly, and the things surrounding the fan have a higher chance of being hit by the blades causing damage.

Too small of a fan, and you’re not getting enough air circulation, and the benefits mentioned won’t take effect. Here are the right measurements for your room:

4. How accessible is the location your fan will be

Is your ceiling fan directly above somewhere you’re always preparing food? If so, make sure you can reach the top of your fan at all times so that you can dust and clean your fan daily. Is your fan right in the middle of an entryway?

If, so make sure your ceiling is high enough that no tall person will bump their head. Ensure that your ceiling fan is easily accessible in case any future handiwork needs to be done.

So, Is a Kitchen Ceiling Fan a Good Idea?

Other than the cons being that a ceiling fan creates more noise, may not reach all areas of your kitchen, and can be tricky to install, the benefits outweigh the disadvantages. Everyone can benefit from having a ceiling fan in their kitchen as long as the things to consider are followed directly.