Let’s face it–living expenses are rising. And many renters are asking the question, “what is a studio apartment?” If this describes you, read on to learn how these tiny spaces can save you money on rent.

Why Consider a Studio Apartment?

These spaces are becoming more popular in the United States, thanks to increasing demand from young professionals who don’t need much space. According to RentCafe, about 5% of apartment renters lived in studio apartments in 2018.

The average studio apartment rent in the U.S. costs $1,065/month. Studio apartments are laid out a bit differently from other types of apartments, like one, two, and three-bedrooms. 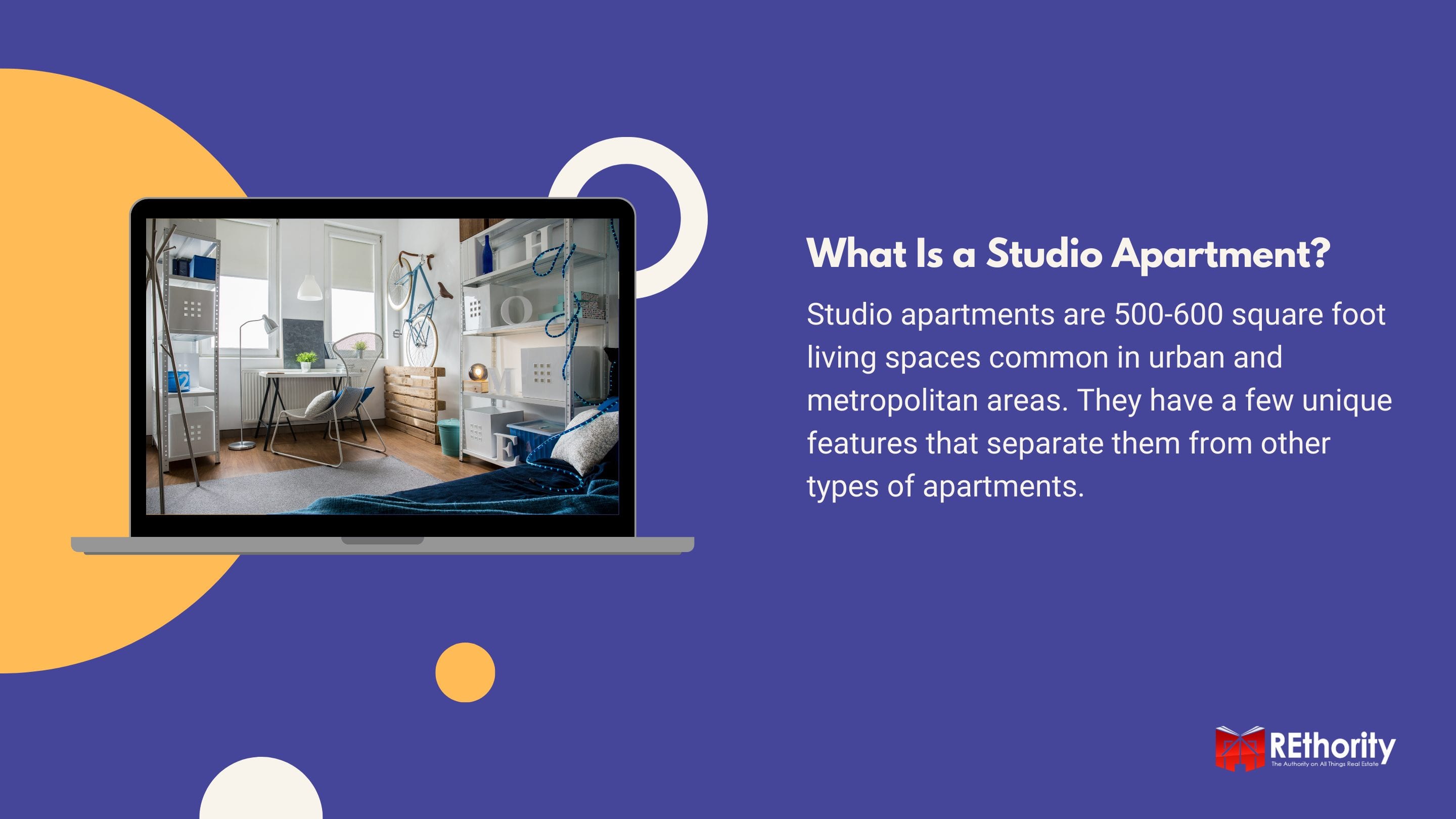 We’ll also share a few tips to make the most of your studio apartment space. Let’s take a look at what makes these increasingly popular apartments unique!

What Is a Studio Apartment?

Studio apartments are 500-600 square foot living spaces common in urban and metropolitan areas. They have a few unique features that separate them from other types of apartments. The difference begins with the floor plan and layout of the unit.

Studios are made up of one, all-inclusive main room or living area. The bathroom is separate from this area, but the bedroom, kitchen, and “living room” are all just part of the single room.

One exception is the alcove studio (sometimes called an L-shaped studio) that features a small, offset wing of space similar to a bedroom. You might think of these apartments as small spaces with very little square footage, but some can be quite large.

Whether large or small, studio apartments are known for offering more open space than other kinds of apartments with separate rooms and hallways. While many vary in size and layout, they nearly always include each of the following elements: 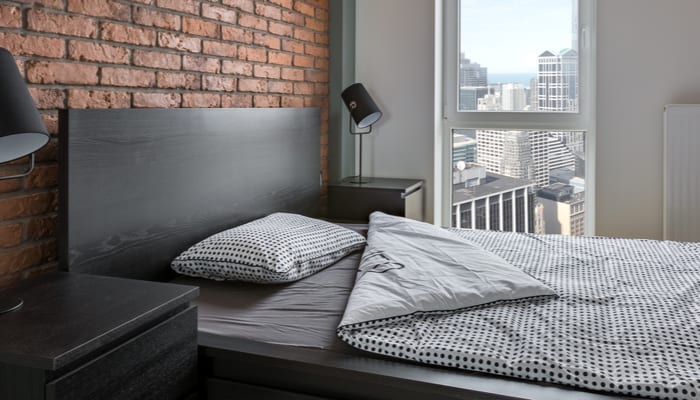 There are no room divisions in studios, so there’s no separate bedroom. This is the primary reason studio apartments are best for solo renters. Most renters simply designate a specific corner or area of the main living space as the bedroom or sleeping area.

The sleeping area typically has enough room for a bed, a nightstand or small table, shelving, and some type of seating.

The kitchen or kitchenette is located directly within the main living area of a studio. Typically, one corner or wall will be designated as the kitchen area.

Kitchens in studio apartments can be surprisingly complete. Depending on the number of square feet available in the apartment, the kitchen might contain:

Stacked and apartment-sized appliances make it easier to fit the functionality of a separate kitchen into the apartment’s usable space. 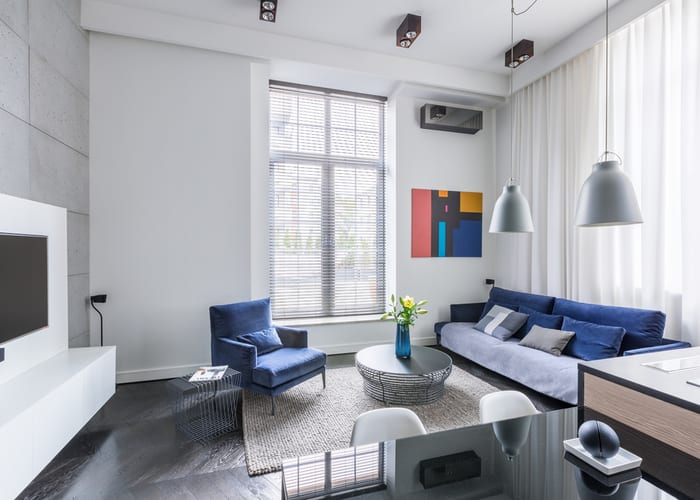 The living areas in studios are, like the kitchen and sleeping area, just part of the main room. Usually, much of the open floor area is used as a general living space.

Couches and chairs, TVs, coffee tables, shelving, desks, room dividers, and wall cabinets can all be part of the main living space in a studio.

In a tiny apartment, the living space might overlap or fuse with the sleeping area. Small spaces can also mean that a washing machine and dryer might be located within the living area if there is no other place for them. 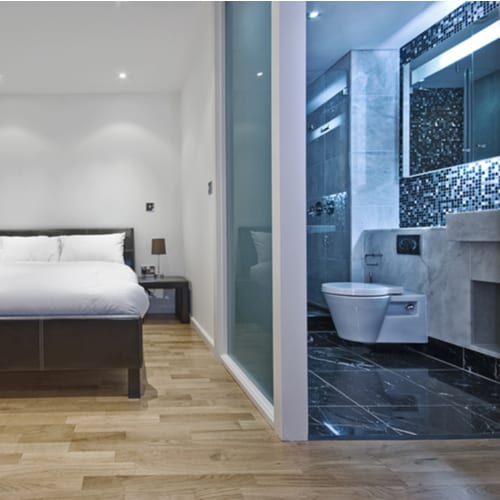 Typically, the bathroom in a studio apartment has a relatively large amount of storage space.

There may be one or more closets inside the bathroom along with base, tall, or wall cabinets, as well as some wall shelving.

You’ll usually find a shower/tub combo, a sink, and a toilet (full baths, not half-baths). If the bathroom is large enough, some renters can squeeze stackable or efficiency washing machines and/or dryers into the room.

Tip: Check out the standard washing machine dimensions here to see if your machine will fit.

What a Studio Apartment Is Not

Before you rent a studio apartment, you should understand what it is not. For example, it’s not a one-bedroom, efficiency, or tiny apartment. Allow us to explain.

Apartments with one bedroom are not the same thing as studio apartments because the bedroom area is separate from the living space.

In studios, the entire apartment is one room, except L-shaped or alcove studios that feature recessed areas that create a more divided effect.

There is some conflicting information online, but in real estate, efficiency apartments are technically just tiny one-bedroom apartments. They are not studio apartments because they feature small, separate rooms for the bedroom, living room, and kitchen.

While many studio apartments are small and feature an average of 500-600 square feet of living space, they are not the smallest type of apartment unit.

Micro-apartments are usually just 150-344 square feet in size, considerably smaller than most studios.

However, compared to the average size of one, two, and three-bedroom apartments in the United States (941 square feet as of 2018), studio apartments are much smaller.

Making the Most of Your Space

The limited space in a studio apartment can be a challenge for some renters. To make the most of the space, you can try adding room dividers or partitions.

They can visually break up the space and offer a more traditional apartment feel with a bit more separation between areas. Shelving and vertical space are other ways to make the most of a studio unit.

Limited floor space doesn’t matter as much when there is plenty of storage and space on and against the walls. Functional storage can create hidden pockets of storage throughout the apartment and cut down on clutter.

If you decide to rent a studio apartment or purchase one as an investment, these tips can help you maximize the space available and make the unit as comfortable as possible.