If you’re planning a bathroom renovation or building project, it’s essential that you understand building codes. One code requirement it’s easy to get confused by is the shower door height code.

Codes vary considerably across the country and by the municipality in which you live. They govern all aspects of construction and are the law.

So they must be followed by professional contractors as well as DIY homeowners. But, even though there are some inconsistencies based on the location of a given project, there are also some bedrock rules to remember. 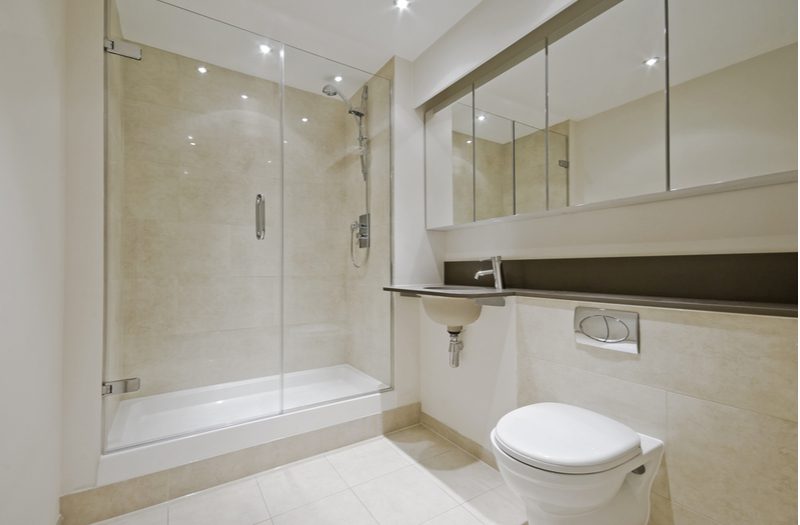 Keep in mind that the goal of the shower door is to both prevent water from leaving the shower while it’s in use while and also allowing easy and safe ingress and egress for those using the shower.

Since we’re all shaped differently and have different skills and movement abilities, the shower door has to accommodate a wide range of potential scenarios.

To figure out the minimum shower door height, you should first determine the type of show door you will have. Once that’s done, you can look at the average shower doors you might find in a big box store.

This will offer a bit of guidance as to the dimensions required for each type of door. For example, standard pivoted or swinging shower doors are usually 48 inches wide, and they are almost always between 68 and 70 inches tall.

Pivot doors also require enough room and clearance for you to enter and exit the shower compartment. So, the width of the door can’t be so great that it hits obstacles and doesn’t open far enough to allow comfortable entry and exit.

That’s why building codes mandate that there is a minimum of 22” of clear, finished, and unobstructed space for access and egress to the shower.

Standard sliding shower doors are 60 inches in width, and they are usually 79 inches high. Building a custom shower door is also possible, but the sliding doors you see in the store or online are representative of what’s practical and required for most spaces.

What About Building Codes for Shower Door Heights? 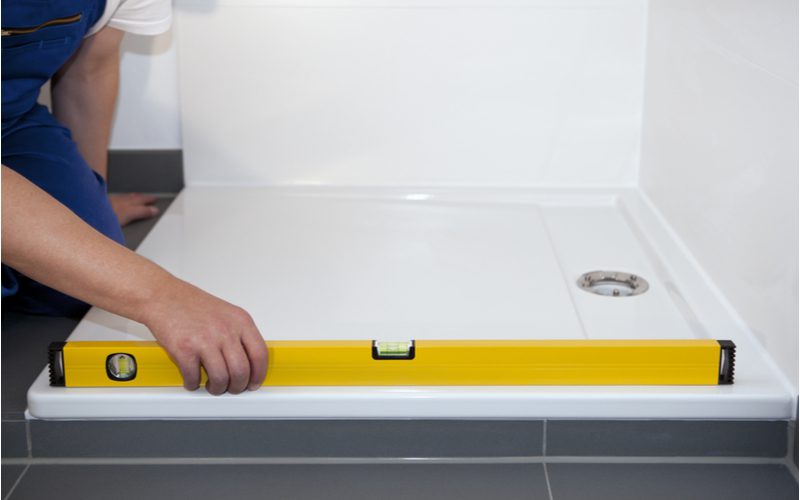 Building codes mandate many things. One thing that they do not mandate absolutely is the height of a shower door. That’s because bathrooms can vary considerably in design.

There are too many ways that doors differ for there to be one guideline for all of them. But, there are codes that govern the construction and design of many other aspects of bathrooms.

By code, shower compartments should have at least 900 square inches of interior cross-sectional area. That area is the inner dimension of the entire shower, not including the fixtures like soap dishes, grab bars, shower head, or valves.

To picture this in your head, consider that you should be able to lay a circle with a 30” diameter on the floor of the shower from the centerline of the threshold and without interference from any of the walls.

Some builders just simplify the code by always making sure that the shower has an inner dimension of at least 30 inches in width and 30 inches in length.

That’s an easy way to ensure compliance with the code. But, for comfort, most designers and builders recommend that a shower compartment always has a minimum of 36 inches in length and width.

This accommodation gives people enough room to turn around without bumping into fixtures or becoming uncomfortable. Plus, that’s an easy way to accommodate future add-ons, like safety bars.

Standard rooms in the living area of a house usually require seven feet (84 inches) of height in walking areas. That means that hallways, bedrooms, kitchens, and even habitable basement spaces must meet the 84-inch minimum.

If you’re wondering about rooms with sloped ceilings, they are allowed by code, but they require that at least half of the room is not less than 84 inches.

For bathrooms, the rules are a bit different. A bathroom or laundry room only requires 80 inches of height to meet the code. When there is a slope in the ceiling, the requirement changes a little to accommodate the slope but still maintains usability.

Tubs and showers equipped with a shower head must have a minimum height of 80 inches over the entirety of the 30 inches by 30-inch area at the shower head. That’s the same minimum size for a shower compartment.

So, if your compartment is only the minimum length and width, it needs a height of 80 inches throughout. Keep in mind that a standard shower head should be 80 inches above the shower floor, but the minimum recommended shower head is 72 inches.

Bathrooms must also have a minimum ceiling height of 80 inches in front of features. For instance, you can’t have a toilet that’s under a sloped part of the ceiling that’s less than 80 inches tall.

Some of these codes and variations might seem complicated. But, if you think about it, they are only trying to keep designs safe and usable.

Sliding shower doors accommodate entry and exit by moving right to left within a track. Typically, the track is on all four sides of the door, fastened to the threshold or edge of the tub at the bottom.

The doors themselves are usually 60 inches in width, and when fully opened, they offer around 21 inches of space for entry and exit in front of the shower. Since they are surrounded on all four sides by a track and built to standard heights, the top track is about 80 inches tall.

That makes it quite common to find sliding shower doors that are 79 inches high and your local big box stores. That also usually means that the track is lower than the ceiling, and there is some open space at the top.

A shower door that opens and closes more like a traditional door is a swinging or pivot shower door. These types of doors are typically 48 inches wide and between 68 and 70 inches tall.

Since they don’t need to fit into a track like a sliding door, they can vary a little bit in terms of placement and overall design. Remember that for a door to open and close smoothly. It will need at least a 16th of an inch buffer around all four of its sides.

Otherwise, the door will be difficult to open and close and may get hung up on the surrounding parts of the shower door.

Shower doors that pivot should always be outward. This prevents a scenario where a person using the shower falls or has an emergency, and rescuers can’t open the door because they are blocking it from swinging.

The International Code Council maintains a compilation of relevant building codes that apply to construction and design in countries around the world. The collection of these codes is often referred to as the International Residential Code (IRC).

But, individual countries, states, and municipalities all pile their own requirements on top of the IRC. So, your best resource is almost always the most local codebook or guidance you can find.

That resource will advise you of specific rules in your area. You should contact your local government for instructions about accessing your local code. You can also look to design organizations like the National Kitchen and Bath Association (NKBA) for best practices in the design of bathrooms.

These are guidelines, not codes. But, while they don’t carry the weight of the law, they can offer a perspective that helps maintain form, function, and safety in bathroom designs.

Other Things to Consider about Shower Door Heights and Code 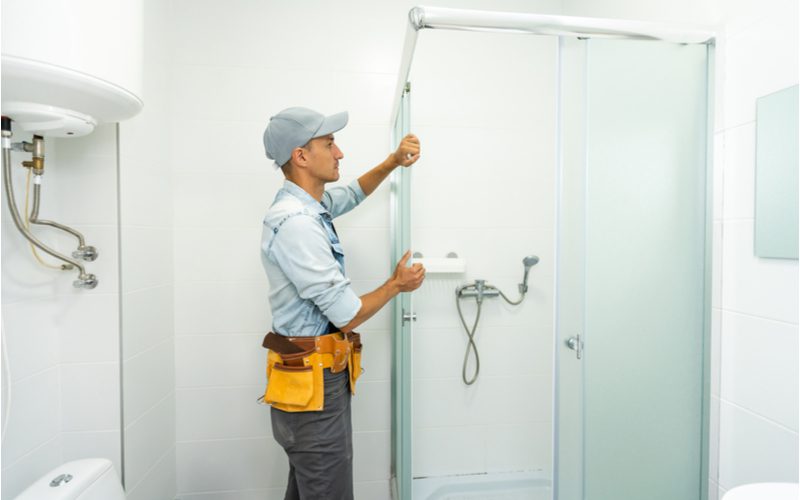 Now that you are familiar with shower door height codes, here are a few important things that you may want to consider.

Some questions about shower door height codes are pretty common. We’ve answered these in detail below:

How Tall Should a Shower Door Be?

A standard shower door is usually between 72 and 96 inches tall. Designs can vary, but that range is most common. However, you can order custom shower doors in a variety of styles for special projects or to fit a non-traditional space.

How Short Can a Shower Door Be?

A shower door can technically be as short as you want it to be. In fact, you don’t even need to have a shower door at all. Some modern designs are entirely open. But, you want to account for that in your overall design, so you don’t create a slippery floor and a dangerous condition in the bathroom.

The height of the door isn’t regulated by code. But, the shower head’s height should be at least 72 inches, and 80 inches is standard. Designs differ, but if you have a door in the shower, it should be high enough to prevent most of the water from escaping the compartment when it’s closed.

How Much Space Should Be Between the Shower Door and Ceiling?

Most builders leave about a foot of clearance between the shower enclosure’s door and the ceiling. This allows steam to escape the compartment during use and also promotes drying of the shower space and prevents excess humidity from lingering in between uses.

Should a Bathroom Door Open Out or In?

For privacy, safety, and odor control, almost all bathroom doors swing inward. Plus, this way, the walking space outside of them isn’t blocked by an opening door. But swinging shower doors always swing outwardly. Otherwise, if someone fell in the shower compartment, they could stop the door from opening and become trapped.

The ICC mandate building codes and it’s paramount to follow these requirements to ensure the safety of building occupants.