The ideal shower head height is not what most people think. In fact, it’s much higher than you’re probably used to. Read on to learn about the average height of a shower head and things to consider when installing.

If you’re remodeling your bathroom or building a new home, determining the ideal shower head height is a vital part of the design. For the shower to be functional and suit all family members, the shower head should be approximately 78 to 80 inches above the floor, making it about six and a half feet high.

Although this is the standard measurement, some considerations may make this not the optimal placement for your bathroom space.

In this article, we look at all the details here that you need to figure out exactly where your shower head should go in your home to give you the best possible showering options. 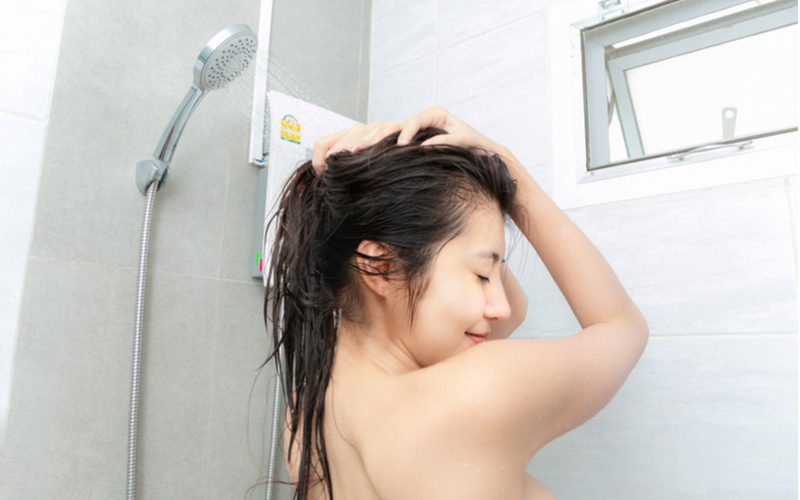 How tall the shower head sits in the bathroom is an individual choice that will suit the design style and the individuals in the home. However, as an industry standard, many professionals install shower heads between 76 to 80 inches from the bottom of the shower floor.

This range is suitable for a large group of individuals, although some may find that 80 inches may be too tall for them or too short. Thankfully, there are ways to help adjust the shower head height even if you don’t have the time or resources to complete an entire bathroom remodeling job.

But figuring out where to install a shower head involves a little more than just how high you want it. You should also explore the type of shower head you are using since different styles will require alternative installments. Some different shower head choices include:

While single spray shower heads are the most common bathroom fixtures, more homeowners are expanding their options to include alternative models. Hand-held showers are terrific for pet owners or individuals with limited mobility and require a versatile way to shower.

Rainfall and ceiling shower heads include a design that sits over the person in the shower rather than coming out from the wall. Because of this placement, their height is typically close to the shower ceiling in low clearance bathrooms.

Sliding bar shower models and bathrooms with multiple shower heads will have varying placements, depending on the shower size. A sliding bar may be mounted anywhere between 76 and 84 inches to accommodate individuals of many heights.

For example, bathrooms with multiple shower heads may have one main head at an 80-inch placement, while two smaller shower heads are further below 65 inches.

Determining the Shower Head Height for a Bathroom

When determining how high to place the shower head, several factors can help guide the height placement. Each of these elements will help gauge where it should go in your bathroom:

Height of Everyone in the Home

A shower head height of 76 or 78 inches will suit some families well if they do not have anyone in the home who is exceptionally tall. However, for a shower head to be ideal, it should be approximately 12 inches above the person using it.

Some individuals stand in the shower, while others require a seat due to limited mobility.

An extremely tall shower head may not be the best choice in these situations. Some homeowners will opt for different shower head attachments in their bathrooms to suit the person using that space most often.

For example, the shower head in the master bedroom ensuite could be higher than the primary bathroom selection used by children and guests.

The Type of Shower Head in Use

The type of shower head in the bathroom can also play a part in how high it sits. Wall-mounted shower heads won’t be as versatile as hand-held models. For example, they will not have much flexibility in adjusting the height for someone taller or shorter than average height.

Other specialty styles, like rain shower heads, will install directly above the showering area to mimic rainfall. These models will need to accommodate the entire height of the person using the shower.

These options also aid in minimizing spray on the surrounding area since the water falls directly downward rather than at an angle.

Hand-held shower heads are the most versatile options for spaces where individual heights vary significantly. These styles can move up or down on the vertical bar to manually adjust the scope to suit the person using it.

The Design Style of the Shower Area

How large your showering space is and the design of the bathroom will also affect where to install a showerhead. For example, a roll-in shower area that can accommodate someone in a wheelchair or who requires a seat inside the shower will have alternative needs than a smaller shower space in an ensuite.

The shower head should not point directly at the person’s face or head, but rather slightly lower at the body and give them enough space to use soap within the shower and not bang into any nozzles, taps, or attachments.

The Purpose for the Bathroom

Naturally, a shower in a home will meet different needs than a shower area in a hotel or public gym. Home showers may have an occasional out-of-town visitor or family member stay over, but the variety of people using the bathroom facilities is far less than public ones.

Public spaces should accommodate a broader range of individual heights to be comfortable enough for anyone who uses the shower.

They should also ensure that there won’t be any chance of someone breaking the shower head because it is too low or banging into the bathroom fixtures during showering. 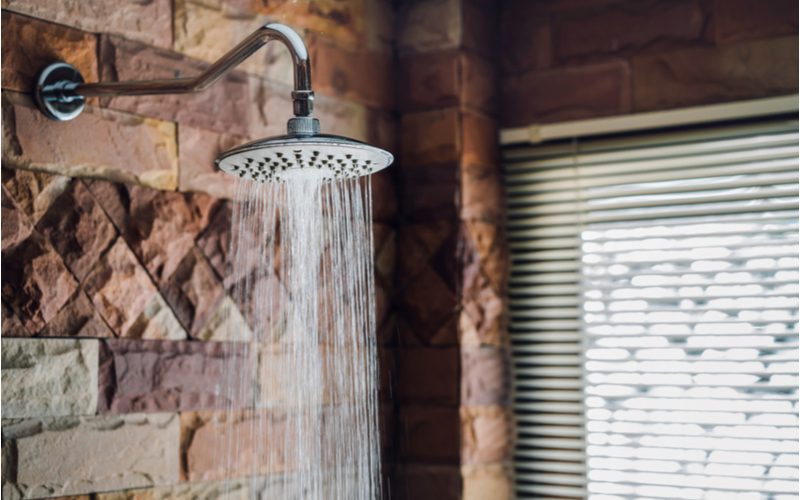 Before you start putting a new shower head into your bathroom, there are some considerations to ensure that the height you choose will work well for the space and the people using it.

Reading through some of these questions may help clear things up if you have any other questions about the ideal shower head height for your bathroom.

Can You Install a Shower Head Too High?

Yes, a shower head can be too high for some individuals. It can make the showering process more difficult if it is exceptionally high. Shower heads that are too high will not have the spray of water covering the body adequately, making it more challenging for a shorter person to wash off the soap thoroughly. In addition, with extremely high shower heads, there is a better chance of overspray, which can create water problems within the bathroom after prolonged use.

What Can I Do If My Shower Head is Too High?

If you don’t want to complete a full bathroom remodel, you can install an adjustable shower arm to the existing shower pipe in the wall. This way, it extends the length of your shower head, bringing it as low as you need. Often, lowering the shower head down an extra six to 12 inches can make a big difference in the quality of your shower.

What is the Standard Shower Arm Size?

Today, the standard shower arm size is 12 inches in length for many bathroom fixtures. However, that doesn’t mean you can’t find shorter or longer ones to suit other bathroom styles. Typically, a 12-inch shower arm provides enough space for the shower head to be away from the wall and project the water spray without any pooling within the shower.

Where is the Best Position for a Shower Head?

Your shower head should never face the opening of the shower or spray directly at the shower doors. It should be in the center of the wall and not point towards the wall or a window; otherwise, it can minimize the volume of water available to shower in. Any off-center installation can pool water within the shower, cause a mineral build-up on your tiles or create leaking issues in overspray areas.

So, what’s the ideal shower head height for a bathroom? Although several factors can help you determine the final measurement, many standard bathrooms with a single spray shower head will sit at 80 inches in height.

This height should accommodate a wide range of individuals in the bathroom without any issues.