Thanks to modern technology, humans no longer need to clean themselves with a dip in the nearest river. We now harness environmental resources and advanced tools to bathe in a safe, effective, and comfortable way.

With industrial advances, there are various parts of a shower’s structure. Fortunately, it’s a simple enough mechanism that we only need to understand for purposes of repair or installation and not to operate properly.

To the untrained eye, parts of a shower may seem complicated. But you don’t have to be a construction professional to get familiar with how its pipework and hardware are designed.

Whether an amateur handyman or a veteran plumber, we lay out the engineering below so you can understand your shower system’s functionality as a whole.

The Main Structure of a Shower

A shower comprises a few main parts—base, drain, valves, piping, and outlets. Within each of those is an interconnected system of smaller pieces, conveying water flow from ground to skin.

In this guide, we’ll show you the inner workings of a shower so you can understand its details— and perhaps be inspired to save time and money with DIY repairs.

The Individual Parts of a Shower

Most of us use a shower several times a week, but what’s really going on behind that linoleum, fiberglass, or tile wall? There are several parts to a shower that are both functional and decorative. These include: 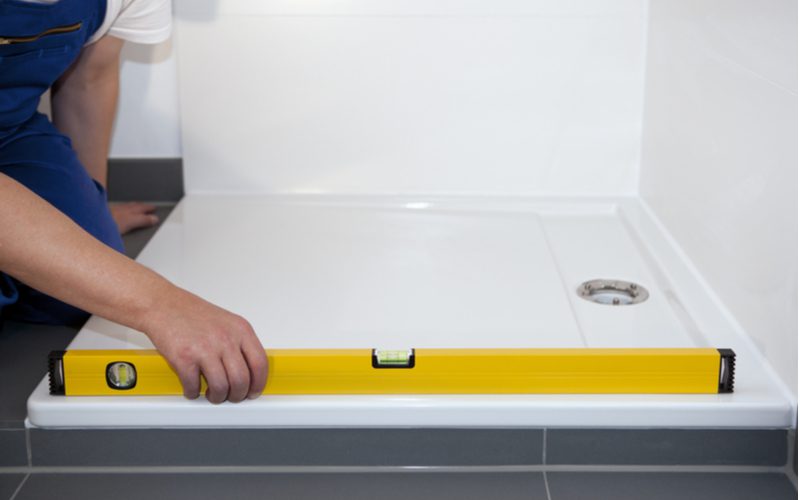 A shower floor structure can be one of a few types. The configuration depends on whether the shower is built into the bathroom construction or sold as a modular prefabricated unit.

A “prefab” shower is assembled off-site, then transported to a home to be installed separately as its own unit (or collection of pieces). These are usually made of plastic, acrylic, fiberglass, or a combination of both.

The bottom part of a shower is either deep like a bathtub or a solid base. The latter type sits lower to the floor and usually has a lip to help keep water level and splash to a minimum. In a built-in shower, the configuration and materials may be seamlessly connected to the rest of the bathroom for aesthetic appeal.

In a modular shower, the base supports the walls and helps insulate the floor from water damage. Since this is one part of the shower that’s most visible, it tends to reflect tasteful design choices where other parts don’t need to. 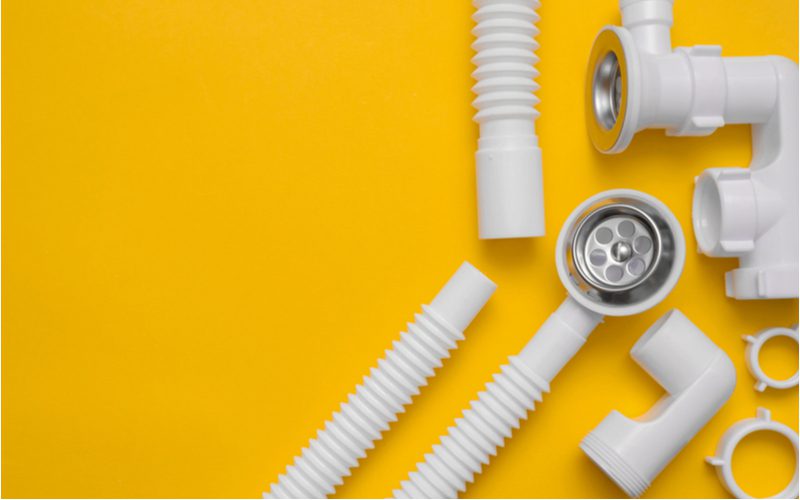 The shower drain’s job is to lead to piping that eliminates liquid waste. It also disposes of overflow to avoid flooding the bathroom. Most drains are separated into two types: point drains and linear drains.

A point drain rests in the center of the shower floor, with a gentle slope from all sides to direct the water downwards. Point drains are the more practical option and work in most basic shower setups.

While a linear drain is more expensive and harder to clean, its larger surface area means faster drainage. These are usually long and rectangular-shaped. A trendy linear drain also opens up more design options for your shower, especially with tile.

Underneath the drain is a trap that collects hair and other miscellaneous items that shouldn’t make their way into the plumbing. After the water seeps through the trap, it flows to a drain line that connects to the sewage system.

On top of the drain, in the floor or shower base, a visible fixture (or several fixtures) rests on top of the drain. With many hardware options available, you can choose the style of drain and cover that suits your taste and match your bathroom décor. 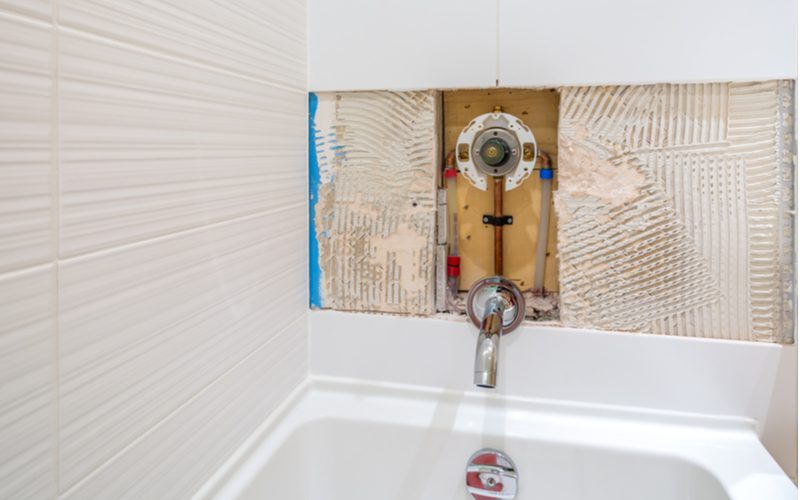 The water must run through a series of pipes to demand a stream of water from supply to the faucet. This journey begins at the mainline, as a private water source, connecting into the house, through the drainage system, and into the shower.

Once in the bathroom, the water supply comes from two pipes: hot water and cold water. These are color-coded to differentiate — usually red for hot, blue for cold. The pipes run behind the wall where the showerhead is attached.

There are also vent pipes that travel upwards and release wastewater gases. This helps regulate the water pressure in the pipes and prevent bursting. 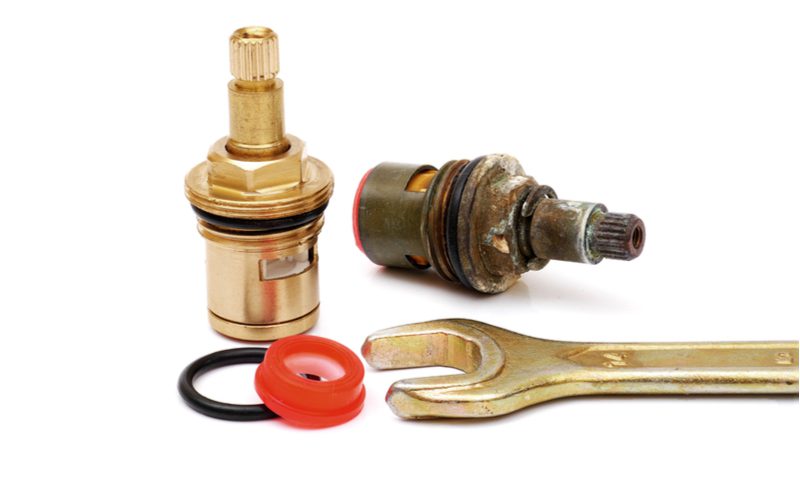 A valve refers to a device that allows manual control to direct or restrict water flow. This is the handheld part that we grip to turn the shower on and off in a shower. In shower construction that doubles as a bathtub, the valve is called a diverter.

This is the piece that flips the running water from a bath to an overhead shower. This way, instead of the tub faucet releasing a gush, the stream is sidetracked upwards and pumped out of the showerhead.

Some bathtub faucets have a small lever on top that performs the job of the diverter valve. One perk of modern shower technology is the ability to control hot and cold water mixture sensitively.

Frequently, there is an anti-scald pressure-balancing valve installed behind the shower lever. This safety device senses the water temperature and regulates it as the shower runs to avoid a gush of freezing or too hot water.

This feature is particularly helpful when a sink runs or toilet flushes and needs to be refilled from the cold water supply, which can cause a sudden fluctuation in the shower’s water temperature. A thermostatic valve goes one step further to regulate not just temperature but also water pressure.

Another valve in a shower system is the emergency shutoff valve. Found on the water meter, this is usually reserved for homes and not accessible in apartments. Typically there is a closer valve out of view behind an access panel in the bathroom. 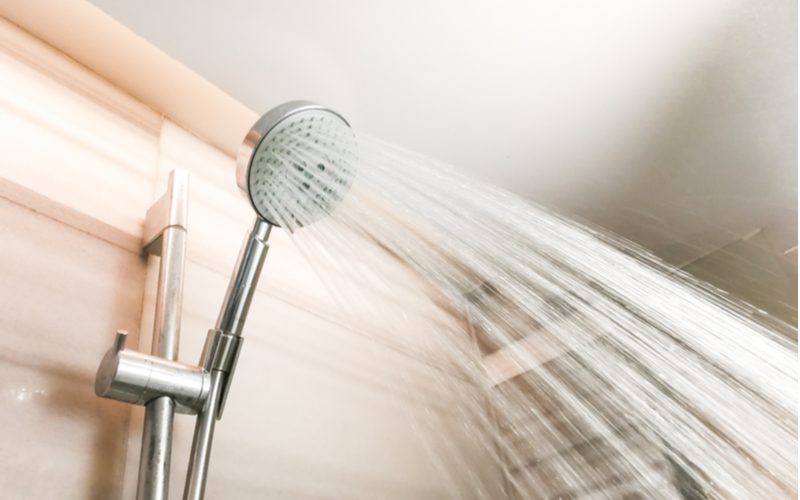 In showers with a bathtub feature, there are two possible water outlets. One is the faucet, located about knee level. This extends out over the basin and releases a larger volume of water at one time to fill a tub.

The other outlet is the shower head — the crown of a successful shower setup. As the endpoint of the water’s journey from its source to your skin, it’s the part with which we are most familiar. You can replace the hardware to adjust your preferences for an enjoyable shower, no matter your water pressure.

A shower head connects to the water supply pipes with a piece called a shower arm. In some showers, this part is flexible or detachable for more comfortable bathing options.

Like the base, the showerhead and faucet are about plumbing functionality as well as stylistic preferences. The showerhead can be a cosmetic decision to suit your comfort. Hardware for both parts, as well as their extension piping, is a matter of taste. 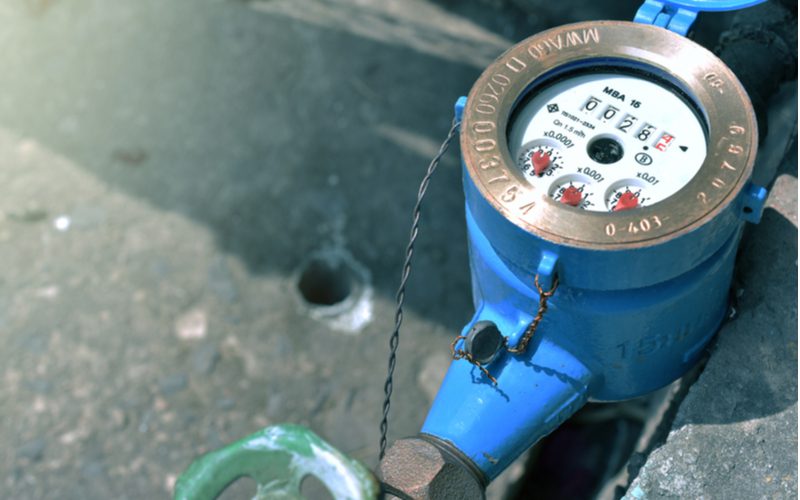 Though located outside, a water meter is a crucial part of a shower system. This is where the main supply flow is measured to determine the monthly costs of water usage. On the supply side of the water meter is an additional shutoff valve in case of emergency

Most showers are standard in construction. However, there are a few exceptions: 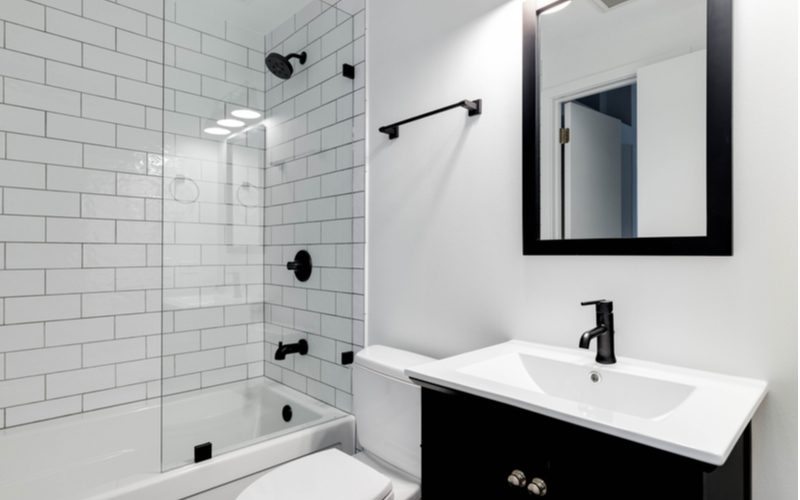 How do I identify parts of my shower?

There are various diagrams of shower plumbing systems available online, sometimes in the format of a cross-section. Fortunately, showers are fairly simple designs that the layperson can understand at a glance.

Where can I find shower parts?

Your local home-improvement retailer carries everything you need for shower construction and DIY replacement or repair. Nowadays, most of these items are available to order online.

Each shower’s control knob looks a bit different, but they work essentially the same way. A 180-degree range of motion usually begins cold and ends hot for a full spectrum of water temperature. In an unfamiliar shower, start experimenting with this outside the tub so as not to burn your skin.

Can I do shower repairs myself?

A: It depends on the extent of the damage. Some shower repairs can be completed at home with the help of a YouTube video and some simple tools. With some basic knowledge of the setup and parts of a shower, a homeowner might avoid calling an expensive professional.

So, What Are the Parts of a Shower?

A shower can be viewed as one bathroom structure or multiple interconnected parts that make up a whole. Seen as a series of parts, the shower structure elongates to include everything from the outside supply main to the showerhead within the shower’s walls.

From top to bottom, these include the outlets, piping, valves, base, and drain system. The average bathroom in the U.S. continues to grow both in number-per-home and size.

With the shower being the central fixture of full bathrooms, it’s essential to understand its components and how it adds to the functionality and appeal of your home.

A homeowner who understands the intricacies of their shower can save time and money by doing minor repairs themselves, educating and empowering themselves in the process.