PEX is a kind of plastic tubing used for cold and hot water plumbing pipes. PEX has some big advantages over copper and PCV pipe. As a result, it’s rapidly becoming the standard for new construction, renovation, and repair of drinking water plumbing systems.

What Is Pex Pipe?

PEX is a shorthand name for cross-linked polyethylene. That’s the material it’s made from. PEX is a plastic, like polyvinyl chloride (PVC) pipe.

But if you’ve ever worked with PVC pipe, you’ll find PEX lets you get the job done faster and with less mess. In America, PEX has a much shorter history as a water-supply piping material than copper, galvanized steel, and PVC.

But it’s been used for decades in European drinking water systems. It’s also common in radiant floor heating systems in the United States.

Some differences in American water supplies required changing the PEX formula to come up with a pipe that would work stateside. However, PEX pipes are rapidly replacing the old materials because of their lower cost, easier installation, and superior performance.

Our friends over at Supplyhouse.com do a great job of explaining what this miracle plumbing material is, and the difference between various types. Check out their rundown below:

Pex piping has many benefits ranging from lower installation costs to greater flexibility due it its malleable nature. We’ve highlighted our top benefits below:

Flexibility means you can complete potable water plumbing projects in less time and with less trouble than with rigid copper or galvanized steel.

You can run a single, unbroken PEX pipe from a central manifold all the way to each individual sink or other fixture. The flexibility of a PEX tube lets it easily twist and turn through walls and floors. 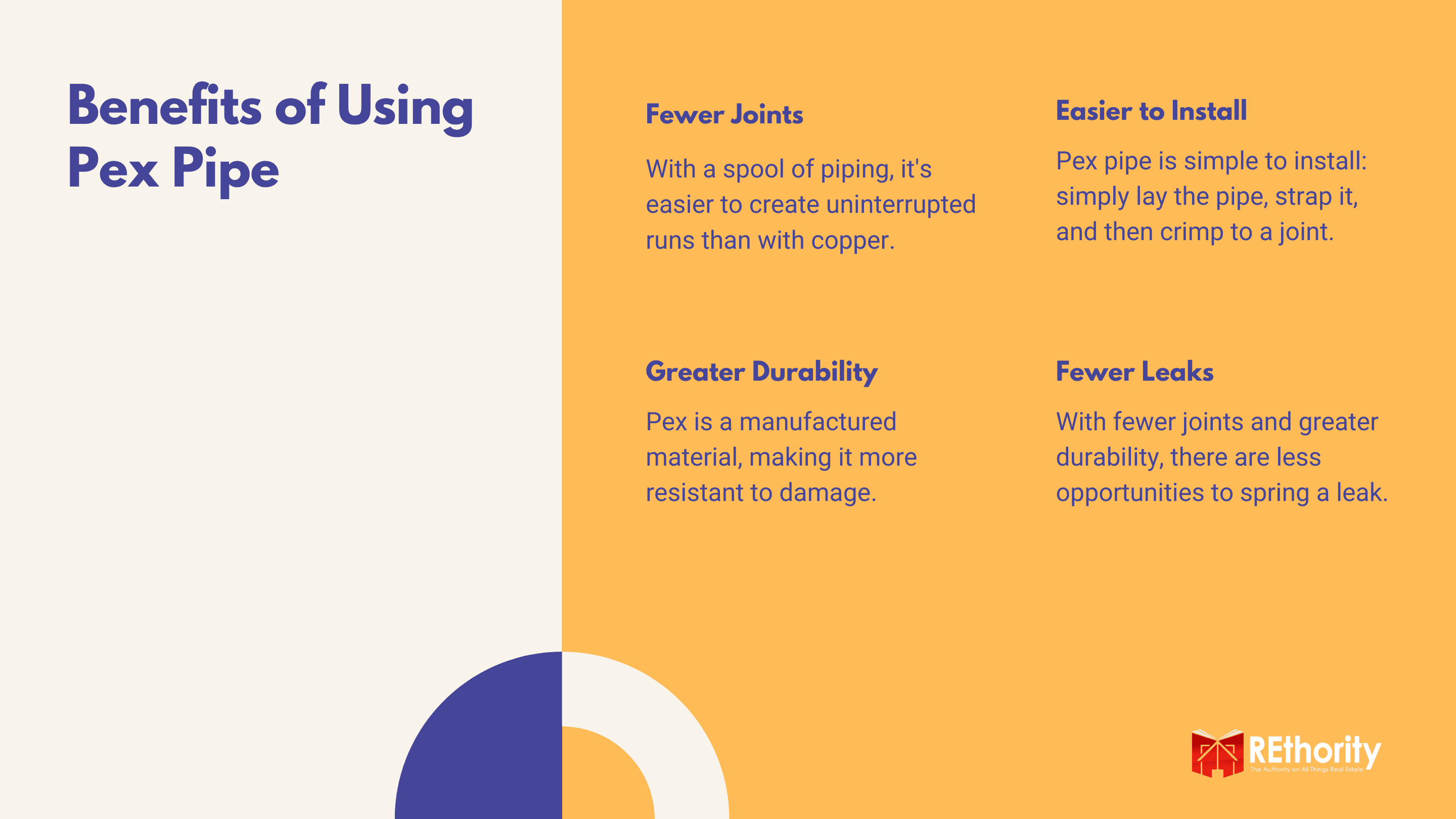 This approach to PEX plumbing is called the home-run system. Other plumbing pipes use a main and branch line design. The home-run system doesn’t require nearly as many joints or connections in the water lines.

Using the home-run system greatly reduces the time it takes to do an installation. It also means less chance of leaks in the plumbing systems. When you do make connections, you don’t need to solder the PEX fittings as you would with copper.

That reduces the need for specialized equipment such as torches. It also means less fire risk. In addition to being flexible, PEX piping expands. That means in the event of a freeze it’s less likely to crack than copper, steel, or PVC pipe supply lines.

The tubing is highly durable. Minimum life expectancy is 50 years. Some manufacturers state it will last for more than 100 years. In short, PEX costs less, is easier to install and last longer than competing materials. So it’s easy to see why this tubing is making a splash in plumbing.

By some estimates, PEX is used in most new home construction today. However, in addition to a lot of pluses compared to the metal and PVC pipe it’s replacing, PEX has some limitations. These include:

While PEX is widely used, local building codes may have some restrictions on its use. So it’s best to check your local regulations before opting to go with PEX.

Since PEX expands and contracts more than other pipes, it’s important to leave slack when installing it. Use plastic bands instead of metal ties to anchor it. For long runs, install loops to accommodate expansion and contraction.

PEX is sensitive to ultraviolet rays. Left in the sun, it will become brittle and may leak or break. So don’t install PEX outside or where the sun can shine on it. And don’t store it in sunlight for more than 60 days before installing it.

You also will need some special tools when plumbing with PEX. Mostly these consist of tools to connect two PEX pipes and the copper, steel or PVC pipes of an existing installation. 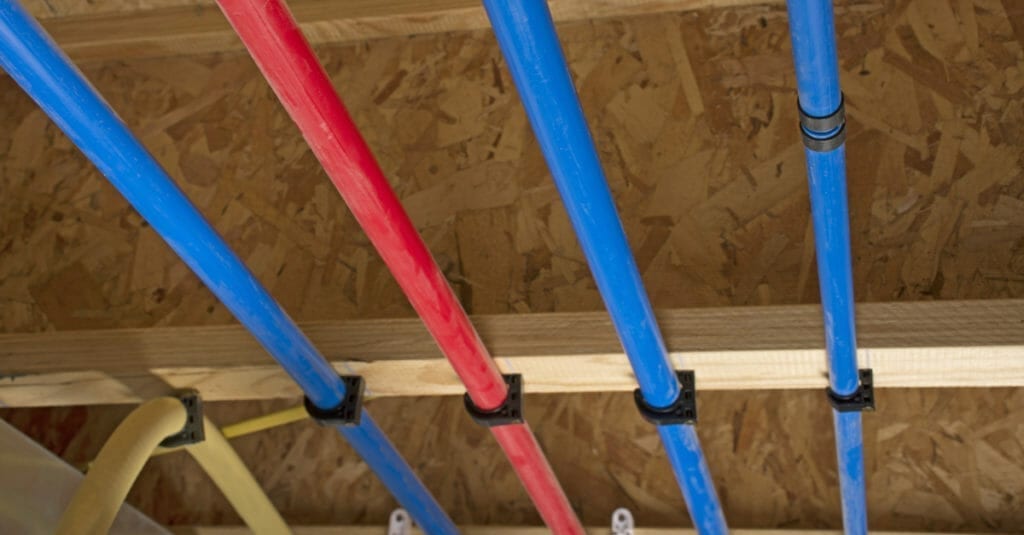 PEX is easy to find in your local home improvement store. Just look for the big rolls of colored plastic piping. PEX comes in four colors. The different colors are used to help plumbers identify which pipes carry hot and cold water. The colors and what they mean:

PEX tubing of different colors works the same. Any color can be used for either hot or cold water. The colors just help with identification.

PEX pipe may be made of three different varieties of plastic material. The three types are A, B and C. Here’s what each code means:

There are several methods of connecting PEX tubing, including expansion connections, compression fittings and push-fit fittings. Each requires some special tools:

There are a number of ways to connect PEX pipes to existing pipes. One of the most popular with the DIY crowd is with a stab-in fitting.

The existing pipe is cut and a special stab-in fitting is inserted in the gap. Then the PEX pipe can be pushed into the stab-in fitting. A spring-loaded connector grips the tube for a watertight seal.

Should You Use Pex Pipe?

Pex pipe is a great alternative to copper because it is flexible, cost effective, and is designed to last for decades. It’s now standard issue by most code requirements, so if you’re thinking about upgrading your plumbing, PEX piping is the way to go.