Wondering how to fix a shower diverter? While it’s not something you’re likely to do every day, you should have an idea of the steps to take when you need to fix it. We’ll show you just that (and more) below.

Wondering How to Fix a Shower Diverter?

Have you ever gone to take a shower, and your diverter won’t lift? Or have you gone to take a bath, and it was stuck raised on the shower setting? It can be frustrating when you’re in a rush to start your day or when you just want a relaxing bath.

Fortunately, you don’t need to call a plumber immediately. You can do this repair job at home if you want to learn how to do it on your own. By shutting down your water source, taking apart the shower diverter, and installing a new one, you can get yours fixed!

Wondering how to fix a shower diverter? Whether your diverter no longer works or there are some loose screws on the faceplate, we’ll guide you through the process.

Before Going Any Further: Learn About the Parts of a Shower

Fixing a Diverter in 6 Easy Steps

There’s nothing more frustrating when you want a bath, but your shower diverter is stuck on the shower setting or vice versa. The good news is that it’s a relatively easy fix.

You’ll need to shut off your water, cover the drain, and then assess whether you need to tighten some screws or replace the diverter completely. Regardless of what you need to do, we can walk you through it.

Step 1: Shut Off Your Water Source

To begin, you’ll need to shut off the water source to your bathtub faucet and shower. This might seem obvious to some, but it’s an easy step to forget.

Turning off the water means the difference between a clean repair and a messy one. The shock of water spurting everywhere is a mainstay of home plumbing projects.

Step 2: Place Drain Guard or Tape Over the Drain

To avoid making this simple project needlessly more complicated, you should fit a drain guard or piece of masking or duct tape over the drain.

This will prevent any screws or small parts from falling into the drain. Even if you think you’re very careful about where you place screws or try to keep them in your hand while you unscrew them, this can save you a considerable headache.

If the screws do fall near the drain, if you have a cover of some sort, you can easily pick them up without having to buy new ones or go searching through your drain.

Once you’ve prepared the work area, you’re ready to fully diagnose the problem. The problem may be either a worn shower diverter or loose screws on the faceplate. In case of the latter, try tightening the faceplate screws but without over-torquing them.

You’ll know to replace the worn shower diverter if water still leaks through the bathtub faucet with the valve engaged. In that case, either the valve itself or its rubber seals wore down through repeated use.

Now, you’re ready to replace your shower diverter. Make sure the replacement part is exactly the same type as the old one. If you’re not sure, it’s always a good idea to bring the old part to the hardware store and ask for advice.

Most hardware store clerks will be familiar with these simple parts.

If you know the exact model of your shower diverter or size, you may be able to order one online if you prefer that method. The one downside to this is that you can’t get it the same day, and if it doesn’t work, you’ll need to return it by mail.

During this phase, you are ready to install the new shower diverter. Place the part in its compartment and ensure that the parts don’t cross-thread with each other.

Tighten the shower diverter with a wrench, remembering not to over-tighten. Remember to “hand-tighten” bolts on home projects. There is never a need to use all of your strength to tighten any bolt or screw.

Doing so only makes it that much harder the next time you need to replace a part. Now, make sure the valve is positioned correctly. Twist the gate or adjust the stopper, depending upon whether it’s engaged.

Step 7: Turn on the Water Supply

Finally, you’re ready to test the shower diverter to make sure it’s properly installed. Turn the water supply back on to test your new shower diverter.

You’ll need to shut off the water again and repeat the process listed above to make sure you tightened everything well. Once you’ve done that, you can try turning the water on again.

Before you begin repairing or replacing your shower diverter, there are a few things you’ll want to consider: 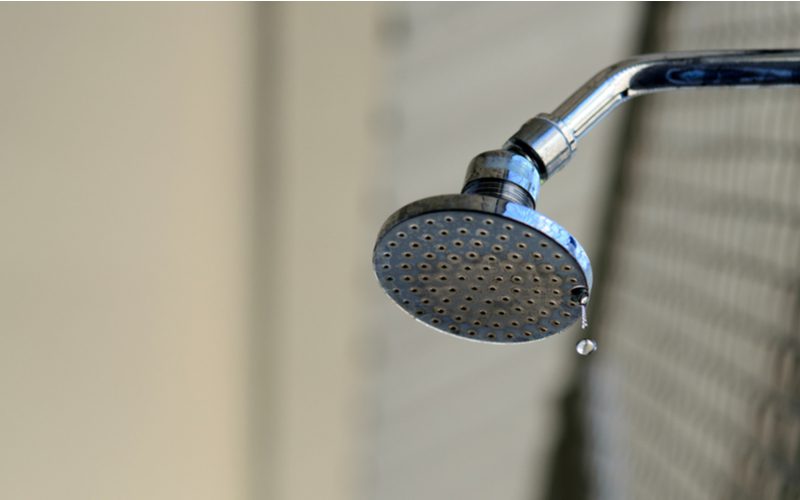 Here are the most common questions on shower diverters and their answers:

What Are Signs of a Faulty Shower Diverter?

Most homeowners have plenty to manage without even thinking about the timely replacement of shower diverters in every bathroom in the household.

The shower diverter is generally a part you don’t replace until it’s already worn and you see signs of trouble. You may experience the following problems with your shower once the shower diverter wears to a certain point.

Many of these symptoms occur because of a buildup of lime within the shower diverter parts. Regardless of whether your water is “hard” or not, your shower diverter will inevitably accumulate some buildup and require replacement.

How Much Does a Shower Diverter Cost?

A new shower diverter may cost between $225 to $575, depending upon how simple or fancy you go. Fortunately, the problem may sometimes be some loose screws rather than a completely worn shower diverter valve. You might also replace just the shower valve cartridge rather than the entire valve. That essential part of the valve may just cost $100 to $350. It makes sense to first disassemble your shower diverter to diagnose the problem, given the costs of hiring a plumber to do it for you.

So, How Do You Replace A Recessed Shower Diverter Valve?

Sometimes, the simple replacement of a shower diverter will be complicated by slightly different plumbing setups. Some recessed shower diverter types require a special toolset called a Shower Valve Socket Wrench Set. This socket wrench set handles the ten standard sizes of fasteners found on any home plumbing for shower valve repair. In some cases, you’ll need to remove the escutcheon should that piece interfere with the socket wrench. In that event, simply unscrew the escutcheon or the retaining nut that holds it, if there is one. Should you find that the escutcheon is held in place with caulking, you have to cut the caulk first. Strap wrenches are also useful to give you extra leverage removing overly tight nuts.

How Do You Remove A Shower Diverter’s Cap?

Many shower diverters have a decorative cap covering the unsightly bolt or escutcheon. Simply pry this cap off with a flathead screwdriver, careful not to damage it. The cap should simply snap back on afterward.

Why Is My Shower Diverter Not Working?

By far, the most common cause of a diverter not working is a residue clog, either partial or complete. If you check the diverter and there’s no visible residue, then it may simply have worn-down parts that need to be replaced.

So, How Do You Replace Shower Diverters?

Then, decide whether or not you can fix it by tightening some screws or replacing it entirely. Once you’ve assessed the problem and put in the work, you’ll have a working diverter in no time.