You are here: Home / Homeowners / Structure / How Far Apart Are Studs in a Wall?

Studs are the vertical boards inside walls that support the ceiling and the floors above. If you’re asking the question, “how far apart are studs,” you are in the right place. Read on to learn critical information about studs. 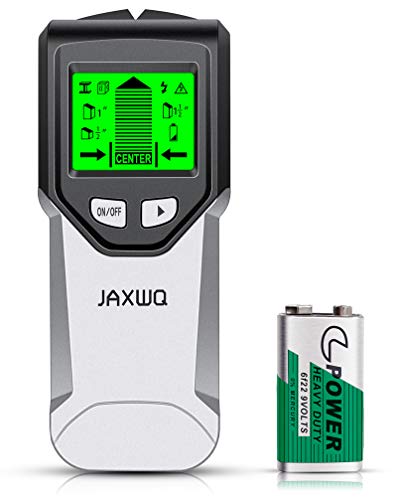 Stud Finder Wall Scanner | 5 in 1 Stud Detector With Intelligent Chip Check Price
We may earn a commission when you click this link, at no extra cost to you.

How Far Apart Are Studs?

Stud spacing is 16 inches on standard homes and is almost never more than 24 inches on older homes. Every box for electrical outlets and switches attaches to the side of a stud. Windows are framed by wooden studs, trim is attached to studs, and the lumber dimensions of a 2-by-4 stud is 1.5 inches by 3.5 inches.

This article discusses factors that affect stud spacing. We’ll explain how builders and home improvement do-it-yourselfers space studs accurately, and how others find them easily. Read on to learn more.

If you are building or renovating a residence or commercial building, stud spacing matters. If the studs are not spaced correctly, the construction may not meet building codes.

Most contractors reference local building codes. However, the International Residential Code stipulates that load bearing walls must utilize 2×4 studs with spacing no greater than 16-inches.

Again, local building codes are what matter. But the IRC is the basis for most local codes, so this is the standard spacing requirement across the country.

Interestingly, improper stud spacing makes it challenging to install sheathing. After all, Sheetrock and paneling are sold in sheets measuring 4×8 feet. Installers count on correct spacing to let them appropriately hang drywall.

One large Sheetrock manufacturer even recommends leaving 16 inches between studs when installing half-inch Sheetrock. This helps prevent the wall from having a wavy appearance.

Homeowners and decorators often need to know about stud spacing when hanging pictures or other items on walls. Heavy objects such as mirrors must attach to the studs. Finding them hidden inside a wall is harder when you don’t know how far apart they are.

For a seemingly simple topic, stud spacing has a sizable number of variables and technical issues. From how you measure the distance to the age of the home, numerous factors influence this.

At best, any spacing rule is only an approximation of what renovators and others may find when they look at existing walls. It’s still crucial for anyone constructing or adding to a wall to follow best practices as carefully as actual circumstances allow.

One of the first things to understand about stud spacing is that measurements refer to the distance between the stud centers, not the edges. Modern wood studs are either 2×4 or 2×6 pieces of lumber.

However, those are the nominal measurements, not the actual measurements. Standard studs actually measure just 1 1/2 inches on the narrow edge. So the center of the stud is 3/4 inches from the side.

When installing paneling or hanging cabinets, nails or screws need to be driven into the center of the stud. This helps them better support the weight and create a strong wall.

Carpenters can only place studs precisely 16 inches apart if the length of the wall is exactly some multiple of 16 inches. This is often not the case, so at least one stud will often be much closer to the next one to make up for the difference.

Stud spacing is also adjusted for doors, windows, plumbing, and ducts. Doors and windows always have studs on either side. Doors usually have two studs per side, one called the king stud and the other the sister stud.

The typical stud is a 2×4. But stronger 2×6 studs are also used, especially on exterior walls or those bearing loads. These 2×6 studs are likely to be placed 24 inches apart.

The length of the stud is also a factor. Longer studs may need to be closer together to provide enough strength. Sixteen-inch spacing for 2×4 studs is standard for studs up to 9 feet long.

Steel studs, often used in commercial buildings, are also generally 16 inches apart. However, they may be 24 inches apart as well, depending on local building codes and the architect’s design.

It matters whether a wall is on the exterior of the building or inside. Exterior walls and some interior walls have to support the structure above. Most inside walls are only partitions and don’t have to be as strong.

The International Building Code, for instance, specifies 16-inch spacing for 2×4 studs in exterior walls. On interior walls, 24 inches is acceptable.

Last but not least, the age of the home can have an effect. Homes built before the middle of the 20th Century are likely to have studs set from 12 inches to 24 inches apart and just about anywhere in between.

One reason for this is that building codes were less widespread. Also, when walls were going to be covered with lath and plaster instead of 4×8 sheets of paneling, spacing wasn’t as important.

Yet another thing to consider is that older studs were wider than modern ones. At one time, 2x4s were actually 2 inches by 4 inches, not the 1 1/2 inches by 3 1/2 inches of today. Measuring accurately center to center isn’t as critical when you are working with bigger studs.

Nowadays, some builders use a design philosophy called advanced framing. This design uses 24 inches as the standard spacing for studs.

Experienced home builders use standard stud spacing schemes. But when a wall has been added or remodeled, all bets are off. A rehabber may leave double king and sister studs when covering up a doorway, for instance.

In that case, a remodeled wall could have studs spaced closer than you’d find in new construction. Remodelers adding walls may be unaware of stud spacing used in the rest of the building.

Then stud spacing can vary on a wall-by-wall basis. They may skimp on studs or use more than usual to meet the unique needs of renovating an existing structure.

How to Measure and Find Studs

Many carpentry tape measures have unique markings indicating stud spacing. There is usually a red mark or the word “STUD” or both every 16 inches.

You only have to remember to measure from center to center using these markings. Then your stud spacing will likely meet building codes and sheathing installation requirements.

Finding a stud hidden in a wall to hang something can be trickier. Use any of these three methods:

If all else fails, a series of test holes can reveal a stud’s location. A finishing nail or small drill bit will make a hole that’s relatively easy to fill and paint over.

Stud Finder Wall Scanner | 5 in 1 Stud Detector With Intelligent Chip Check Price
We may earn a commission when you click this link, at no extra cost to you.

So, How Far Apart Are Studs?

Whether building a wall or attaching something to an existing wall, stud spacing is an essential issue. Most studs should be 16 inches apart. However, 24 inches is also standard.

In practice, studs may be closer or farther apart than either of these standards. It ultimately depends on many factors, from local building codes to timber conserving designs.

Make sure to let us know whether or not you found this article helpful by commenting in the section below. And while you’re here, be sure to check out our Home Guide by clicking the tab in the footer at the bottom of the page.

Andrew Helling is the founder and editor of REthority.com. He graduated from the University of Nebraska at Omaha where he obtained a Finance and Banking degree. As a formerly licensed real estate agent and property manager of 500 single-family homes, Andrew knows real estate.
More About Andrew