A french drain is a buried pipe that helps transport water out and away from your home. But what exactly are they, and do you need one for your home? Read on to find out.

What Is a French Drain? 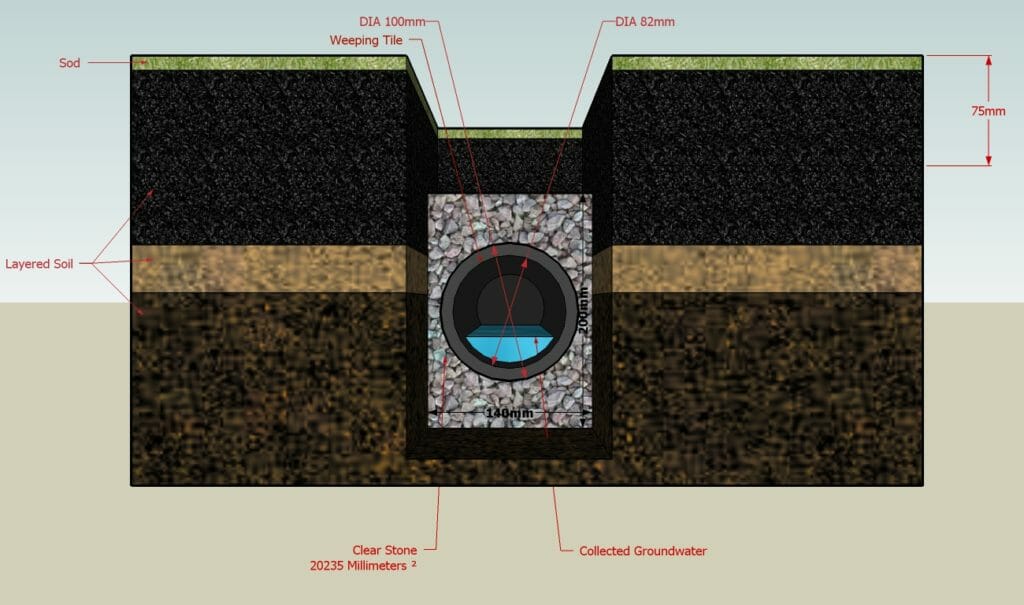 A French drain is a flexible and effective way to deal with common water drainage problems. It consists of a sloping, gravel-filled trench with a perforated pipe at the bottom.

The first description of French drains came in the mid-19th Century. The inventor was an American farmer named Henry French. French described how to use the drainage systems for jobs such as drying out swamps to create fields for growing crops.

French drains have been used since then to solve drainage issues on countless residential and commercial properties as well. For some drainage problems, a French drain may be the best or only effective solution.

Especially in climates with more than average rainfall, French drains are a common home improvement. A French drain system may be a good drainage solution if:

While these drainage solutions are effective, they come in a few variations. Read on to learn about French drains, the different types, and which solution is best for your water issues.

All French drains collect excess water from places where it isn’t wanted and direct it elsewhere. However, different types of French drains work best in certain situations. 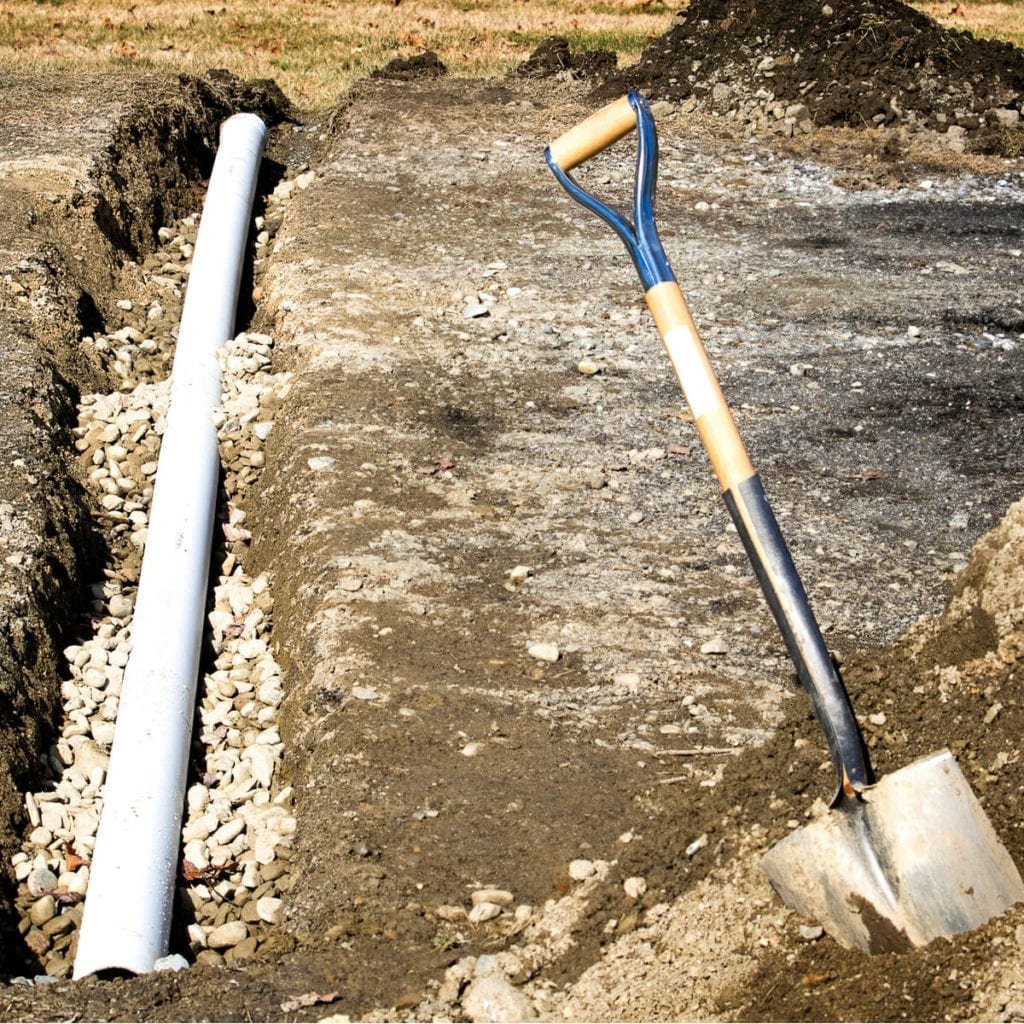 A curtain drain is a type of French drain often used when standing water pools in a yard. Curtain drains are also sometimes called shallow drains. This is because they aren’t dug as deep as some other types.

A low spot in the yard or soil that drains poorly can cause water to pool. Water can also build up during heavy rain on the uphill side of a retaining wall or house foundation.

Whatever the cause, pools of standing water on a lawn can kill plants and attract mosquitoes. In a worst case scenario, water can back up and flow into the house.

Getting rid of standing water can prevent damage. When done properly, a French drain can make a property more valuable. To fix this problem, dig a trench for a curtain drain. The trend often measures about a foot or two deep and about the same width.

You can make a curtain drain any width or depth you need, however. Some drains may be several feet wide and as deep. Others could just be a few inches wide.

To drain water effectively, the trench needs to slope downward. Gravity makes the water run to a place where it can be disposed of. The slope doesn’t need to be too steep. About 1 inch per 8 feet of slope can ensure water runs instead of pooling.

You may want to start the trench a little higher than the low spot. This will allow it to capture the water before it pools. Places you may want to direct the water to include:

After digging the trench, place a perforated or slotted pipe in the bottom of the trench. Typically this will be a 3-inch PVC pipe. For small drains you may use a smaller pipe.

Consider using a section of solid pipe when the trench passes near trees or shrubs. This reduces chances of roots growing into and clogging the pipe.

Put a layer of landscape cloth over the pipe and the sides and bottom of the trench. Then fill in the trench with drain rock. Drain rocks may be from 1 and a half inches across to three-eighths of an inch across. They can be any color or shape.

You can leave top of the French drain open, with gravel as the top layer. You can cover it with a metal or wood screen. Or you can use a layer of dirt or mulch.

If you cover the drain with soil, consider first putting landscape fabric on top of the gravel. This will help keep soil from filling gaps between the stones and making the drain less effective. 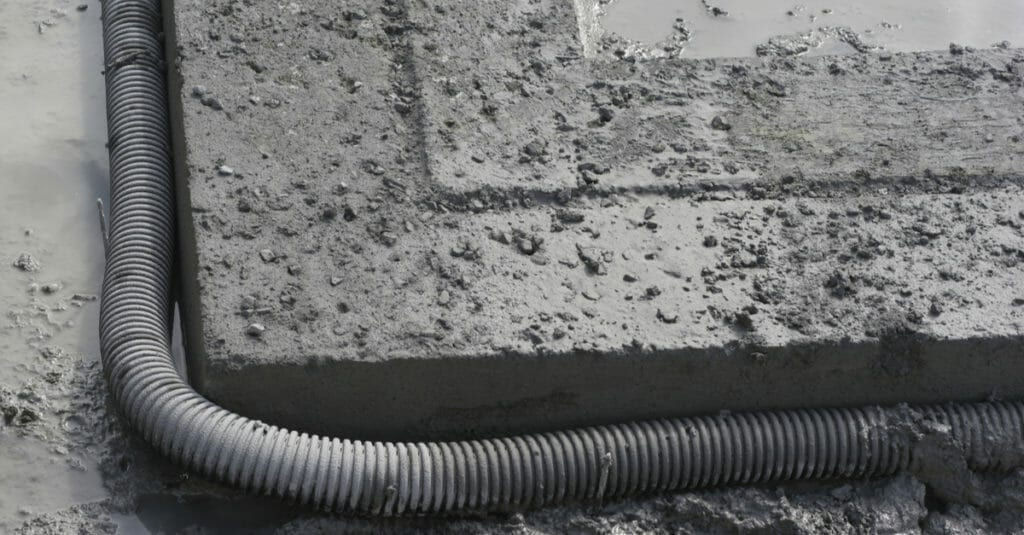 A footing drain is a type of French drain that runs around the entire perimeter of a house. People also call these deep French drains. Footing drains are called deep drains because the trench needs to go to the bottom of the house footing.

This could be several feet down. Use footing drains when water is getting into a basement. The drain goes all the way around the house to prevent water damage from any direction.

Sometimes footing drains direct the water not to a ditch or other external spot but to a cistern. There an electric sump pump can move the water up and out to a suitable drain.

Tip: Installing a footing drain can be expensive and tricky. Simpler curtain drains may be suitable for do-it-yourselfers. For footing drains, consulting an engineer or professional drain installer is a smart idea. 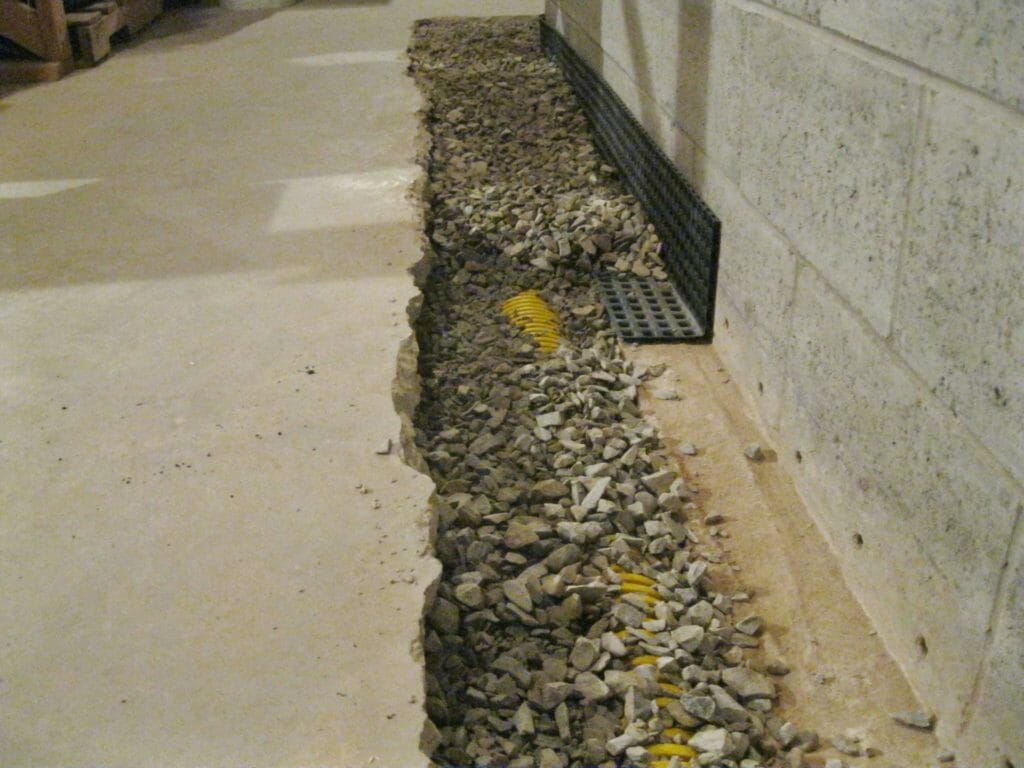 Sometimes a basement drain is installed inside the basement rather than on the outside of the footing. Then it’s called an interior drain. Interior drains may be more effective than footing drains at keeping a basement dry.

However, they are not simple to install. Making one involves cutting through the concrete floor of the basement. Next, a trench is dug running all the way around the basement.

The gravel-over-pipe construction is the same as other French drains. The water may drain to a collection tank. From there, an electric sump can lift it high enough to flow to another drain.

Interior drains can be covered with a grating. Another option is to cover it with concrete except for a small slot between floor and wall. This lets water flow down the basement walls and into the drain for collection and pumping.

Should You Use A French Drain?

French drains give you some relatively simple, quick and effective ways to deal with drainage issues. Except for those using electric pumps, they have no moving parts and use no energy.

The best time to install a footing drain is during the house’s construction. It’s easier and less costly to do it then. Later on, landscaping, driveways, sidewalks, decks and porches may be in the way.

Sometimes you can’t foresee a drainage problem when building the house. Later construction of other homes, streets or driveways can also cause more water to flow onto your property.

When that happens a French drain can be a very helpful solution to a water drainage problem.