Recoverable depreciation is an important feature of many home insurance policies. Understanding and using it correctly can significantly increase the size of the benefit you as a policyholder receive on a claim.

Recoverable depreciation often makes it worth filing an insurance claim that would not otherwise exceed the deductible. However, there are some limits and special requirements to meet to receive the extra benefit.

Not all homeowner’s insurance policies include recoverable depreciation. And you may have to take specific actions in order to receive it. 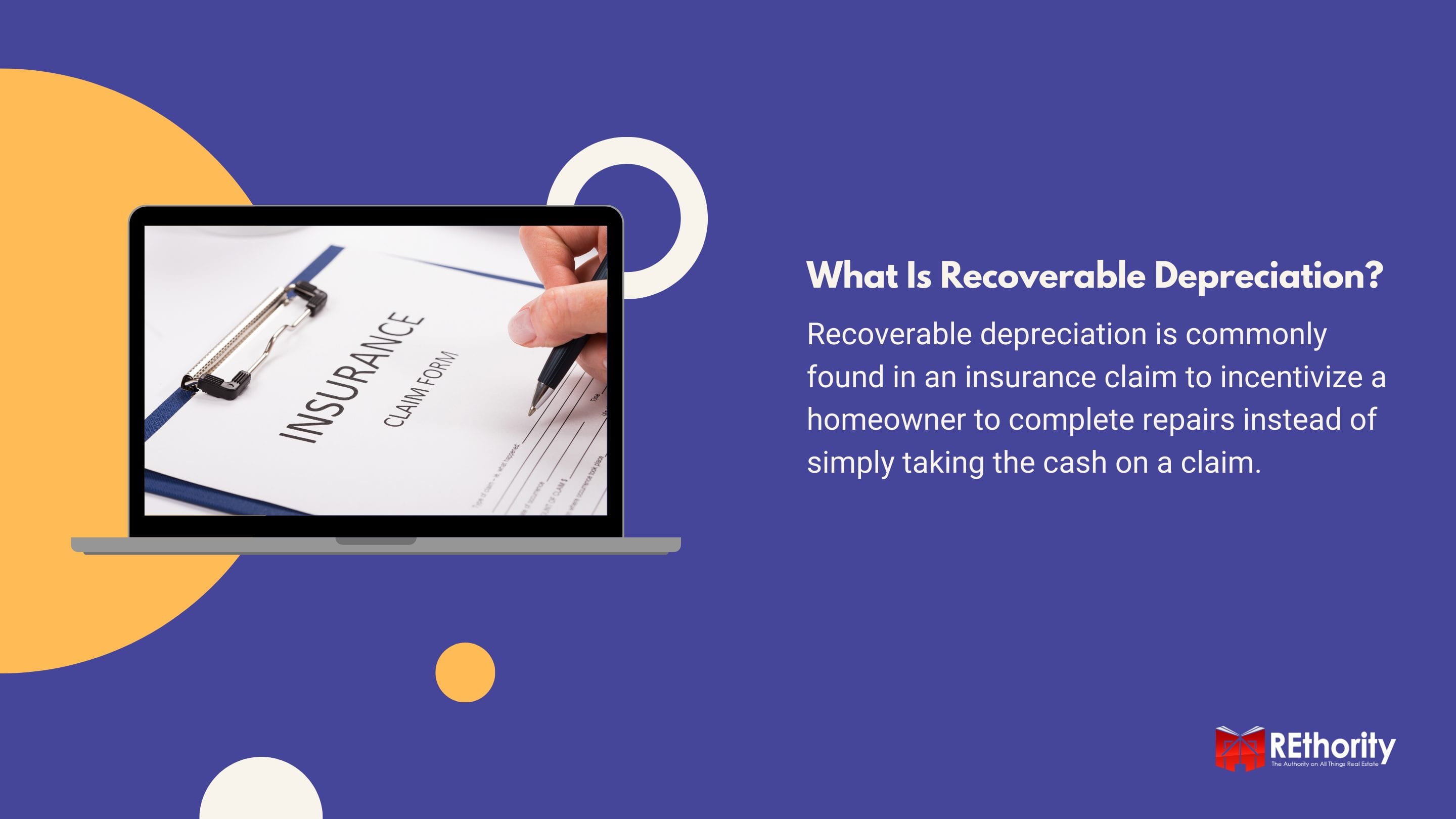 What Is Recoverable Depreciation?

To start, you need to understand the concept of depreciation. This is an accounting term that describes how to allocate the cost of an asset over its useful lifetime.

As time goes by, an asset experiences both wear and tear and obsolescence. This causes it to lose some of its value. This is true of appliances such as refrigerators and television sets that may be covered by homeowners’ hazard insurance policies. 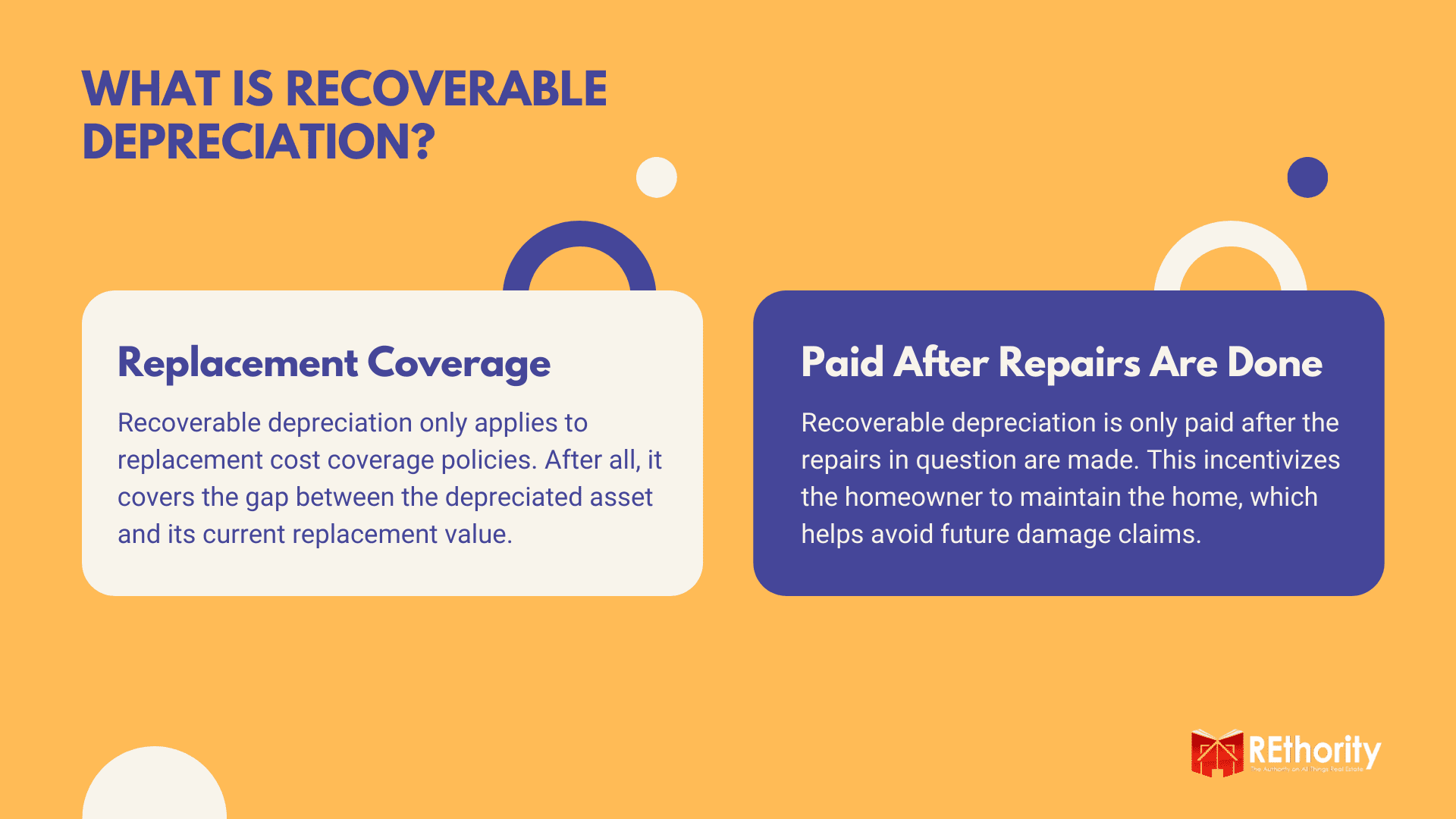 It’s also true of the house itself. All else equal, a new house is more valuable than an old house. This can be of particular importance when it comes to major parts of a house.

The roof is a part of the house where recoverable depreciation can make a big difference on a property insurance claim. With that in mind, here is our definition:

Recoverable depreciation is the difference between what property is worth after depreciation and what it would cost to replace it today.

It only applies to insurance policies with replacement cost coverage. In practice, after you make a claim, your insurance company gives you an initial payment for the actual cash value (ACV) of the property. This is equal to the depreciated amount.

After you repair or replace the damaged property, you’ll get a second check. This is the recoverable depreciation amount. The total adds up to approximately the original cost of the property. Keep in mind, however, that if your policy has a deductible, you’ll have to pay that first.

Let’s look at an example of how recoverable depreciation applies to an insured roof. The roof in this example cost $10,000 new. It was 10 years old when it was damaged by a hailstorm.

Here’s a table explaining how it works. 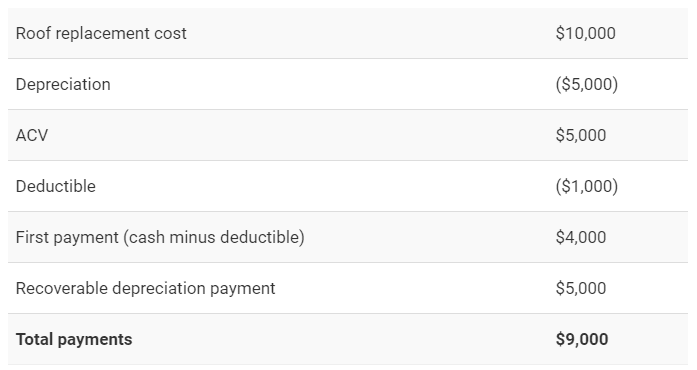 As you can see, recoverable depreciation makes a big difference on this claim. There are some potential catches, however. 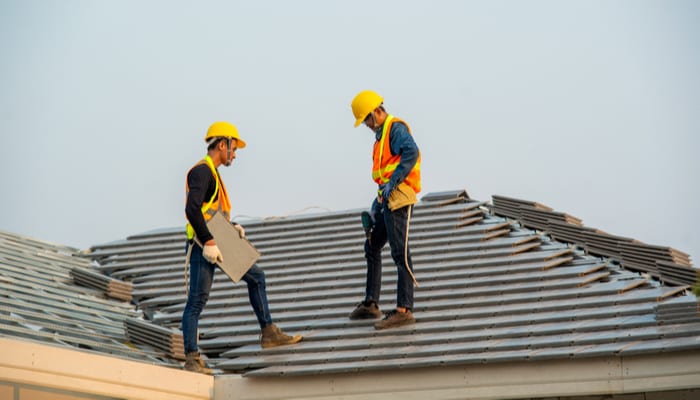 To get that second check from your insurance company, you have to actually repair or replace the roof or other property. This means you’ll have to use some of your own money, plus the first payment, to do the work.

Insurance companies do not like to pay more than it actually costs to replace or repair covered property on a replacement cost policy. This means there’s no benefit to you the policyholder of getting the work done for less than the full replacement cost.

Getting the roof damage repaired and paying for part of it out of your own pocket is not the only requirement. You may also have to complete the work by a certain deadline in order to recover the depreciated amount.

If you have made a claim on an item covered by recoverable depreciation, here’s are the steps to take to ensure your insurance policy pays up.

It’s a good idea to include your claim number on any correspondence with the claims department. This includes when you submit the proof of replacement. The insurance company should be in touch to discuss any additional requirements.

Otherwise, you should receive a second check covering the recoverable depreciation. Difference insurance companies have different claims processes. To be sure you are doing it correctly, check with your agent or claims representative. 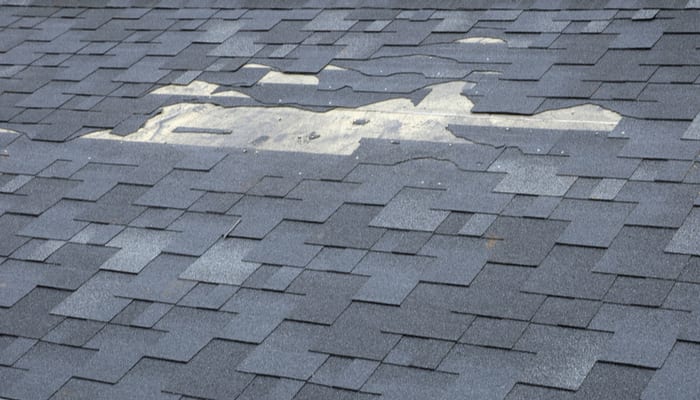 In the case of the roof claim above, such a policy would pay only ACV minus depreciation. That means receiving only a single $4,000 check instead of two checks totaling $9,000.

However, not all property may be covered by recoverable depreciation. For instance, you may not be able to file a claim to recover depreciation on carpeting damaged by a water leak.

Some Items Not Covered

Depreciation on an awning damaged by high winds may be non-recoverable depreciation. For this kind of property, you may be limited to ACV.

Also, keep in mind that if you spend more on the replacement than the original insured property, you will probably have to pay the difference yourself. The same is true if you can’t get the repair or replacement done for the cost specified by your policy.

Finally, if you decide not to get the roof replaced, the insurance will probably not pay for recoverable depreciation. However, you should still receive the first payment for ACV.