If you’re looking for a plant to use as a ground cover or simply want a unique addition to your garden, you should consider monkey grass. This hardy evergreen plant requires little care and looks great. Read on to learn more.

What Is Monkey Grass?

Monkey grass is a common name for two kinds of ornamental grass that look similar but are actually different types of plants.

Dwarf mondo grass, or ophiopogon japonicus, is also called Monkey Grass. But while it looks similar, there are differences. Dwarf monkey grass is shorter and has finer leaves than liriope.

This article focuses on liriope. But dwarf mondo grass is a member of the same plant family and generally has similar growing habits and uses.

Liriope has two primary uses. It is often grown as an evergreen replacement ground cover for grass. There are many reasons to use Liriope, but gardeners typically like that it:

Liriope are often used as border plants and as edging. It may run along a sidewalk or driveway, separating the pavement from the lawn. It may also be planted around the edges of a foundation as a decorative touch. 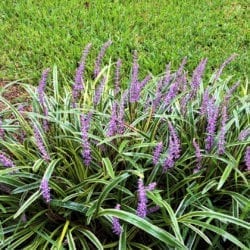 This is the most commonly planted variety of monkey grass. People also call it clumping liriope because of the way it grows in compact masses.

It is a low-growing flowering plant with typically dark green leaves from one to two feet high. Yellow and variegated liriope are also common coloring variations.

The flowers may be white, pink, or purple. Liriope blooms from July to August. Later it forms clusters of blackberry-like fruit.

Originally from Asia, liriope is widespread throughout much of the United States. Gardeners appreciate its hardiness, low maintenance requirements, and modest growth habits.

It won’t grow in extreme heat or cold. But it flourishes just about anywhere else and requires little watering or other care. 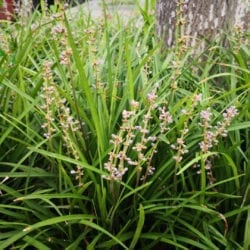 Also known as creeping liriope, this grass has a mixed reputation with gardeners. It’s similar to liriope muscari except it aggressively spreads using underground rhizomes.

Also, keep in mind that creeping liriope should only be used when you want a solid bed of nothing but liriope. It will tend to choke out any other plants.

Liriope is a popular plant, especially throughout the South. You can find it for sale in just about any nursery.

Garden centers typically sell liriope in small sprigs or larger clumps. A tray of nine to 12 finger-sized sprigs of liriope may go for around $10. Bigger pint- or quart-sized plants can cost a few to several dollars per plant.

Liriope grows in full sun, filtered sun, or full shade. It can handle the weather in hardiness zones 5 through 10.

It’s not necessary to do much to prepare a bed for planting liriope. To do so, simply follow the below instructions:

That’s it! This hardy, low-maintenance grass will grow quickly and without much care.

Once you get a bed of liriope established, it’s pretty much set and forget. After the plants are growing actively, you may not have to water at all.

However, keep an eye out during extended hot and dry spells. Give them some moisture if leaves start looking brown around the edges.

Liriope doesn’t really require feeding. However, to promote faster growth, you can fertilize once a year using a 10-10-10 fertilizer. Water the fertilizer in to protect foliage.

To control weeds, it’s best to hand-pull the offending invaders. While liriope is called monkey grass, it’s not actually a grass. It’s from the lily family.

That means you can’t use chemical blends designed to simultaneously weed and feed lawns of Bermuda or St. Augustine. The herbicides in these products can damage or kill the liriope.

If you prefer to use chemicals to control weeds, apply a post-emergent weed killer. And try to avoid getting it on the liriope.

Liriope suffers from few pests or diseases compared to a lot of plants. However, it can be affected by fungus. Red leaf spots could indicate the need to apply a fungicide.

Trim liriope once a year when it’s not growing actively. Fall through late winter are suitable times for trimming.

Just before the early spring growing season may be the best time. If you cut it in the fall, you’ll be looking at unattractive stubble all winter until the new growth comes in.

You can clip small beds and borders of liriope with a pair of hedge trimmers. For large areas, some gardeners prefer mowing liriope with a lawnmower set on the highest setting.

If you want more liriope, you can divide the clumps and plant those. You can do this every few years.

Liriope can be invaded by grass that will be hard to get rid of after it’s established. The best way to keep grass out of a bed of liriope is to put a physical border or edged trench between it and the lawn.

Getting Rid of Monkey Grass 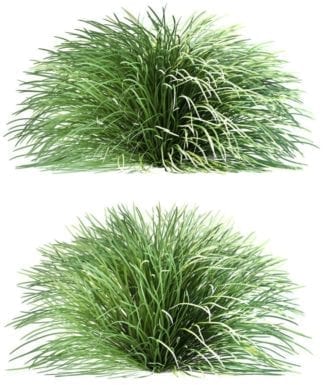 If you decide you no longer want the liriope, or it’s grown into places where you don’t want it, prepare for a potentially long struggle. Eliminating liriope is easier said than done.

Liriope — especially the creeping variety — can become a relatively serious pest of its own. If this happens, it can take a while and a lot of effort to eliminate it from a landscape.

For liriope muscari, applying a broad-spectrum pesticide containing glyphosate should do the job. You may have to make more than one application, however.

Getting rid of liriope spicata is often a much tougher challenge. The underground rhizomes or roots that help creeping liriope creep also make it hard to kill. Should you need to remove it, simply:

You may have to repeat the entire process of digging, raking, and spraying to get rid of a creeping liriope planting. All told, it may take a few growing seasons to eliminate it completely.

Liriope, especially the clumping variety, liriope muscari, is a useful plant for landscaping. It’s particularly suitable as a border or as groundcover where shade prevents turf grass from growing.

And while you’re here, be sure to check out our post on purple flowering trees. If you loved this article, you’ll love that one even more.