Planting grass is useful for a variety of reasons. If you’re seeking a versatile grass for your lawn or landscaping beds, you should consider Dwarf Mondo Grass. Read on to learn about this unique plant and when to use it.

What Is Dwarf Mondo Grass?

The botanical name for mondo grass is ophiopogon japonicus. Another common name for it, especially in the Southern U.S., is monkey grass.

Mondo grass is referred to as an ornamental grass. It’s not, however, technically a grass. Instead, mondo grass is a member of the lily family.

To further confuse things, mondo grass shares the monkey grass nickname with another species called liriope. Liriope also is a member of the lily family and looks a lot like mondo grass. Gardeners also often use the plants in similar ways.

Dwarf mondo grass’s botanical name is ophiopogon japonicus ‘Nanus.’ As you might guess, it’s smaller than regular mondo grass. It’s only half the size of its bigger relative. But the two plants are otherwise alike.

Both varieties of mondo grass are native to Japan, China, and Korea. Mondo grass is a common feature of Japanese gardens. And it’s often part of the landscaping around temples. 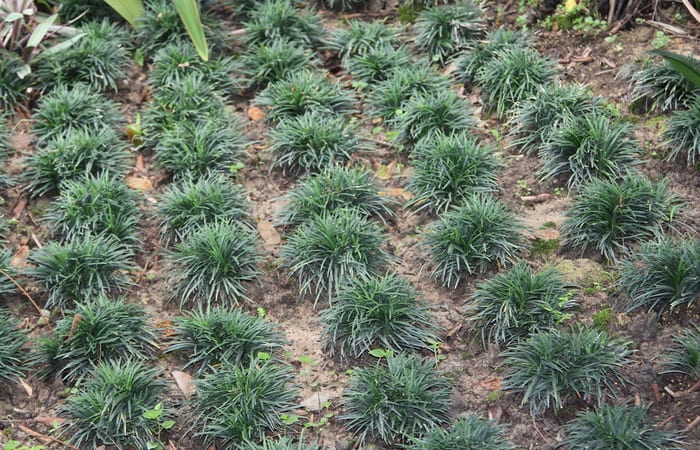 Dwarf mondo grass is a perennial, so you only have to plant it once. It’s evergreen, so it provides a lively splash of vegetation year-round.

The foliage color is dark green in color. The leaves are long and thin, resembling small straps. The plants grow in clumps with the slender leaves growing up and spreading out to make bunched tussocks.

The flowers are purple, lavender, or white when the plant blooms during summer. Later the flowers turn into shiny blackberries.

Dwarf mondo grass really is small for a landscape plant. The mature height may be only 2 to 4 inches off the ground. By comparison, regular mondo grass may be up to 10 inches tall.

The clumping tussocks are only 4 inches or so wide each. Dwarf mondo grass spreads by extending underground runners. It’s a slow-growing plant, so it’s not likely to be invasive. 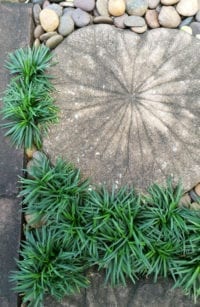 It can also be used in rock gardens as a groundcover where mass plantings end, replacing turf grass. Dwarf mondo grass grows well in part to full shade. For this reason, it’s often planted where grass won’t grow due to lack of sun.

And, because it grows slowly, it doesn’t require much, if any, trimming. When planted on steep slopes, it can eliminate the need for mowing.

An unusual use for monkey grass is filling in between stepping stones or pavers on garden paths. The tiny plants fit well into small gaps between rocks. And they don’t grow tall enough to get in the way of people strolling down paths.

Dwarf mondo grass is drought-tolerant and may not need to be watered at all except in hot, dry weather. It will grow in hardiness zones 6 to 11 and can tolerate full sun, except in the South where filtered sun is a better bet.

Dwarf mondo grass is generally bought in the form of live plants. Gardeners report that it is hard to get commercially supplied seeds to germinate. However, some gardeners say the seeds from established plants can be harvested and grown successfully.

You can plant dwarf mondo grass in almost any well-drained soil type. It does not require much sunlight, water, or fertilizer and attracts few pests. It does not do well with a lot of foot traffic, however.

Before planting, clear the ground of other plants. You can use a herbicide such as glyphosate or get rid of weeds by tilling.

Neither of these methods will kill seeds, however. To do that, you can cover the area with a sheet of clear plastic for several weeks during the summer.

When you’re ready, plant your plugs about six to eight inches apart. This spacing will work for either a large area of groundcover or a narrow strip of edging.

Dwarf mondo grass grows slowly, so it will take a couple of growing seasons for plugs or sprigs to fill in solidly with this spacing. If you want faster fill-in, you can plant them closer together.

Cover the roots but not the crown of the plants with soil. Apply mulch between plants to help keep the weeds down until the dwarf mondo grass can get established.

In the beginning, water often enough to keep the soil somewhat moist. After the plants are growing well, you only need to water occasionally, if at all, and that only during hot, dry spells.

The best time to plant dwarf mondo grass is in early spring after the last frost. You may plant as late as early fall, however. Just give the plants time to get well-rooted before cold weather.

You can probably skip the fertilizing when it comes to dwarf mondo grass. However, it’s not a bad idea to include an organic fertilizer when planting the sprigs. And a light feeding or dressing with compost between plants in the spring during the early years will encourage it to fill in.

Trimming is another area where dwarf mondo grass gets a pass most of the time. Winters in colder climates may leave plants with some brown leaves. Removing these will improve the appearance, but it isn’t necessary.

Dwarf mondo grass has few natural enemies. Deer don’t care for it. Snails and slugs can sometimes be an issue, and fungus may attack during long wet spells. However, these are not usually serious problems.

Weeds can invade a patch of dwarf mondo grass because of its slow growth rate. Hand-pulling the weeds is the best way to remove them.

Some broadcast herbicides such as sethoxydim and clethodim can destroy grassy weeds without harming the dwarf mondo grass — it’s not a grass but a member of the lily family. However, it’s best to avoid spraying these pesticides on young plants.

Once the weeds have been removed, a pre-emergent herbicide can be applied in the spring before weed seeds germinate. This should help keep the weeds from becoming a problem again that season.

Once established, dwarf mondo grass is easy to propagate. Every three years or so, clumps can be dug up and divided, or plugs can be taken out and transplanted to help create a new border or groundcover.

Dwarf mondo grass is a good-looking evergreen perennial that requires minimal care, has few pests, and is drought-tolerant. It makes excellent borders, provides groundcover in spots too shady for grass, and is a favorite of many landscapers.