The insect family is by far the largest within the animal kingdom. There are over 100 subfamilies of beetles alone! Read on to find out more about this enormous group and its characteristics.

The scientific order of Coleoptera is extensive. With such a large geographical and numerical reach, the need for subclassifications is crucial. Four suborders, 17 superfamilies, and 168 families branch out under Coleoptera.

Variation Within the Beetle Family 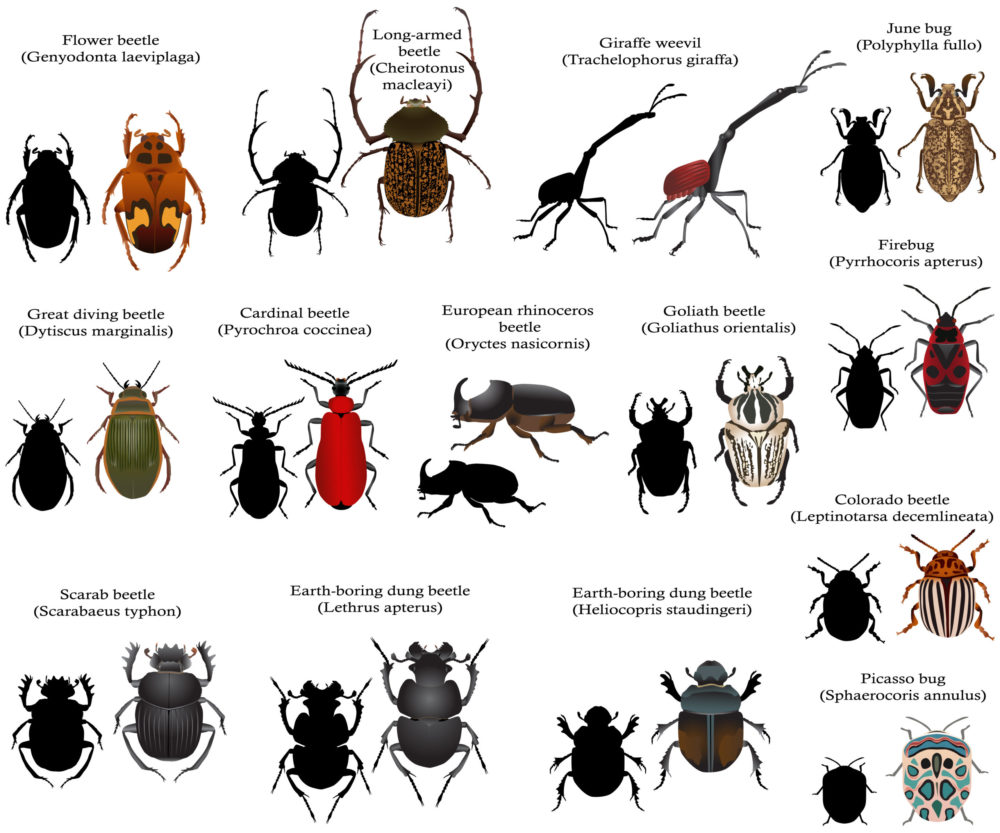 You might think of beetles as all looking the same. Most of them have round, compact bodies and dark coloring. Similar to roaches, they are easy to spot in nature due to their bulk and slow pace of movement.

However, there is a significant variation within the beetle family, including various colors, shapes, and sizes. The differentiation extends to their lifestyles and habitats.

Some beetles’ diets are wildly contrasting from their neighbors in the Coleoptera scientific order. Let’s take a look at the breakdown of this massive insect family so we can build a better understanding of its subgroupings.

Note that our list is not exhaustive but collects the families into an alphabetized format that is easier to grasp and visualize. To detail every beetle type in existence would take a much longer guide!

The name for this beetle comes from the Latin “tenebrio,” meaning “seeker of dark places.” True to their linguistic origin, this type of beetle loves to burrow under rotting wood and other organic material in forests, and many of them are actively nocturnal.

Darkling beetles inhabit natural spaces all over the world, ranging from the driest deserts to the wettest swamplands. They are relatively long-lived compared to most insects, with some surviving for many years.

This beetle superfamily is one of the most understated, with most of the members small and black or dull brown. They’re not the ones that are going to draw attention from nature lovers or insect enthusiasts.

Byrrhoidea beetles tend to blend in with their environment, which is a mixture of forest habitats like streams, mud, and fallen logs.

However, there’s quite a variety of characteristics within this grouping. Pill beetles, cedar beetles, turtle beetles, and water pennies all belong in this categorization.

This type of beetle is renowned for its stunning appearance, making it highly sought after by nature aficionados and insect collectors. Its body is shaped long and compact like a bullet, with iridescent coloring under a metallic sheen.

There are over 15,000 species in this family, also known as wood-boring beetles for their habitat preferences.

Often you can find them burrowing into dead or dying trees in search of a cozy home. The adults lay the larvae in roots or logs for safety, as well as a plentiful source of food when they hatch.

The unique body structure of ground beetles means that we commonly mistake them for large ants. The abdomen divides and elongates on the hind portion, which makes them thinner and longer than most chunky beetle types.

This subfamily includes tiger beetles, which used to be listed separately as Cicindelinae. Carabidae is by far the largest beetle family and includes over 34,000 species. There are dozens of subgroupings but they all preserve a similar body type.

Another subspecies of beetle that looks like another type of insect, the long-horned beetle stands out for its extra-long antennae. They are sometimes called “longhorned” or “longicorns,” and can resemble hornets.

The appearance of this beetle varies widely, but all share similarities in length, shape, and antennae, as well as antenna tubercle placement on the head. The name for long-horned beetles comes from Greek mythology.

Cerambus, a legendary musician, escaped death using a pair of wings he received from the nymphs. This gift of flight allowed him to soar over the flood and escape being turned into an element of nature as happened with some other figures in the story.

Comprising tens of thousands of species, Chrysomelidae is another gigantic beetle family. This cute, round-bodied type is entirely herbaceous, feeding on plant material and hanging out in leafy trees and bushes.

Collectors prize them for their bright colors and interesting shapes. Leaf beetles often act as pests to farmers and gardeners, due to their choice of diet.

They can be invasive to potatoes, asparagus, and mustard, and many types carry diseases. The larvae also provide agricultural challenges during the breeding season.

Weevils, also known as bark beetles or snout beetles, are not nearly as appealing as other members of Coleoptera. Their long proboscis aids in digestive function by allowing them to reach food sources that may be buried or otherwise unreachable.

Besides their facial features, weevils also “sing” by rubbing their middle body together to produce a melodic hum.

This type of beetle is a well-known pest for as long as humans have been attempting to farm grain. Weevils reproduce by laying eggs inside granules of food such as flour sacks, sometimes ruining entire supplies with their tiny white larvae.

What makes this subfamily unique is the way it produces a “clicking” sound. This happens when they lock up their thorax and then quickly release it, for a mechanism that attempts to startle predators into leaving them alone.

They will first roll up into a tiny ball to play dead and then pop into the air while clicking, for greater dramatic effect.

Unlike some other beetles which are pests, click beetles enrich their environment. The larvae consume decaying matter, while the adults prefer seeds and roots which can naturally prune some types of crops.

There are about 1200 species within this grouping. Stag beetles are some of the most recognizable in the insect world due to the males’ gigantic pincers or “antlers” that they use to combat other beetles during mating season.

Nowadays, the stag beetle is very rare to find in the wild, due to deforestation. It often fetches thousands of dollars when captured as a pet. This is even more mind-blowing when you consider that once the egg hatches, the stag beetle only lives for a few weeks as an adult.

This peculiar type of beetle secretes an agent called cantharidin, which serves multiple purposes. During mating, the male shares it with the female as a gift.

Once she lays eggs, she covers her young with cantharidin to protect them against hungry predators. This secretion can cause burns, infections, and other skin problems if humans contact with it in large doses.

This defense mechanism is mildly toxic to livestock, especially horses. If properly harnessed, it can serve as a potent aphrodisiac or even as a medicine, but otherwise, it’s classified as a hazardous agent and should be treated with caution.

Another subspecies that you can’t mistake for any other, the scarab is famous for its affinity for dung balls. The males roll up their disgusting treasure as both a food source and also a nest within which the females will lay their offspring.

The impressive grandeur of this tiny beetle has made its way into folklore and legend over thousands of years. The Ancient Egyptians used the stag beetle as the symbol of the sun at midnight and treated it as sacred. They also viewed the dung phenomenon as representative of the cyclical nature of life, with the world revolving just as the beetle rolls its wad of dung.

You can recognize rove beetles for their shortened wing covers, which leave the abdomen partially exposed. This strange attribute sometimes makes this type of beetle look injured, but it’s a natural occurrence in their adult form.

Due to their shape, these beetles can fold themselves up in a way that hard-shelled beetles cannot. They might resemble earwigs, ants, or other types of insects, but retain more characteristics of the beetle family. 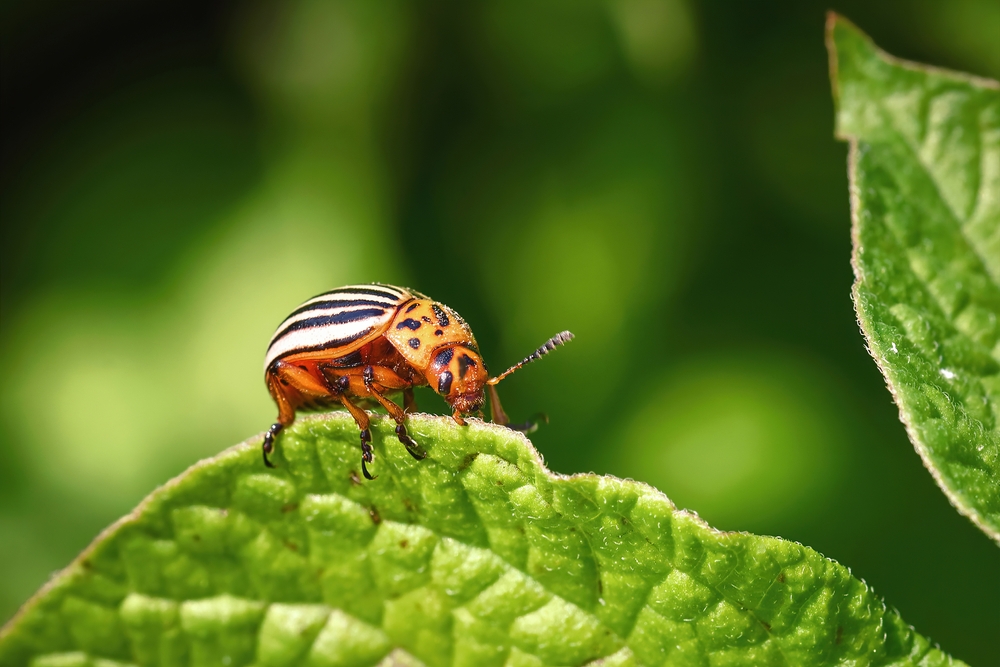 There are so many fascinating things to find out about Coleoptera! These tiny members of the animal kingdom are unassuming and don’t always make themselves known in nature, but if you’re able to run across them, you can learn much about insect life.

Amidst all the different types of beetles are interesting characteristics and varying traits of reproduction, eating patterns, and habitat. Keep reading for some fun facts.

Why are there so many kinds of beetles?

Coleoptera is wide-ranging, omnivorous, and hardy. Over time they have adapted to function in essentially any environment, and their tough exterior keeps them safe from many animal predators who opt to chase easier meals instead.

The staggering number of beetles in the world results from them being so integral to their surroundings as well as their symbiotic relationship with certain human crops and other animal species.

How many beetles are there in existence?

The beetle family encompasses the largest group of animals in the entire world. Scientists estimate there are around 3 million beetles, which account for about one of every four animals on planet Earth. Almost 400,000 types are carrying an official label, with many more being discovered every year.

Cockroaches, or palmetto bugs, are more closely related to termites than beetles. They have differences in the texture of their wings, length of antennae, and lifestyle preferences (such as aversion to light) that separate them from their beetle lookalikes.

What is the rarest beetle on earth?

The stag or scarab beetle is very valuable for its use in medicines and as a prized specialty pet. However, it’s increasingly hard to find, even at its larger size compared to most beetles. Habitat and diet shortages have restricted the availability of this beetle species for the last few decades.

Are beetles harmful to humans?

The worst a beetle is going to do to a human is to lightly pinch them, and this is only true for the largest stag beetles which are difficult to find in the first place. If anything, beetles are a common pest for homeowners when they attempt to make their habitat inside parts of a house such as wooden beams, warm flooring, or moldy basement elements.

So, What Are the Main Types of Beetles?

It’s hard to put an exact number on it, as new species are discovered almost daily. But at this point, it’s safe to say there are four distinct suborders within Coleoptera and hundreds of variations under that.

Scientists continue to work on categorizing each beetle to make them easier to understand and study. Ancient and fascinating, this is an insect subclassification that seems to be never-ending.

If you keep exploring this intriguing family of insects, you’ll soon discover the appeal of this vast array of beetles for yourself. Happy searching!