Orthoptera or suborder Caelifera, scientifically known as the grasshopper, dates back almost 250 million years ago. The grasshopper is one of the oldest living insects on Earth.

Grasshoppers are considered pests as they swarm together to eat crops and types of lush grasses. Originating from South America, grasshoppers are found worldwide on almost every continent.

While most grasshoppers are solitary insects and only group together during mating season, you can find swarms hidden in grassland, forests, jungles, and farmers’ fields.

While there are over 8,000 species of grasshoppers, two kinds make up the entirety of the orthoptera order: Long-horned and short-horned grasshoppers. All species range from .25-3 inches long and come in a variety of green, brown, olive, and multicolor. 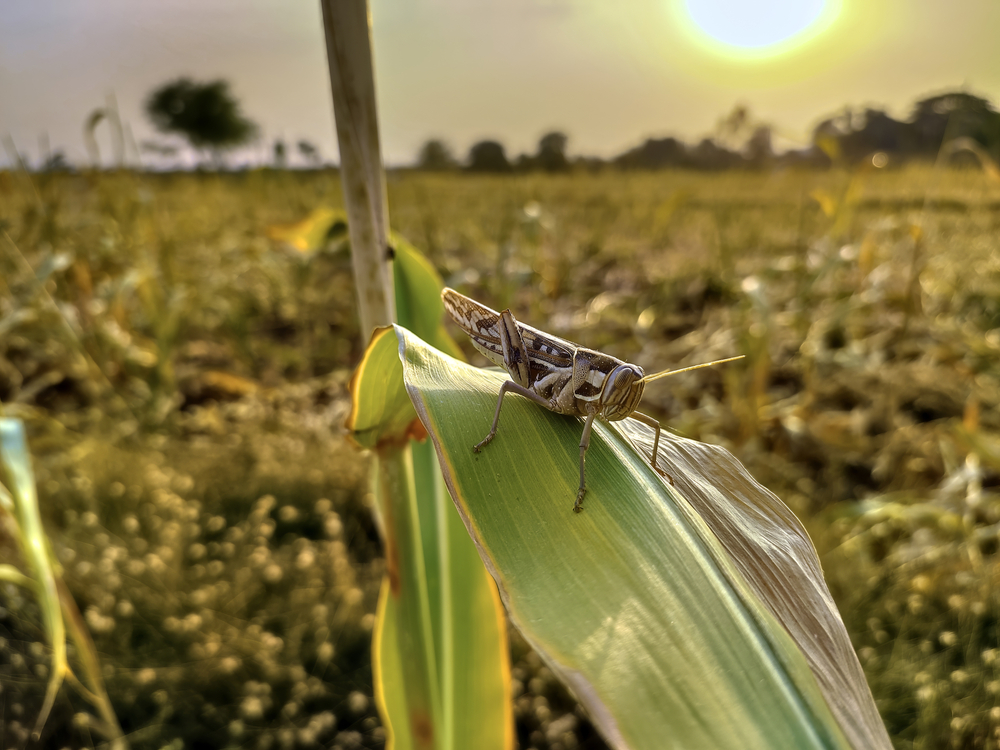 In contrast, long-horned grasshoppers have antennas longer than their body. Most grasshoppers are active at night and feed on plants, flowers, seeds, and leaves.

Although most grasshoppers are herbivores, some like to feed on dead insects or insect feces for extra protein and energy. Below, you’ll learn about the two kinds of grasshoppers and their habits:

Katydids, also known as bush crickets or long-horned grasshoppers, are the most sighted long-horned hopper and are famous for their mating calls. The Pterophylla Camellifolia or Microcentrum Rhombifolium sings a song phoneticized as “katy-did, katy-didn’t” that sounds repetitive into the night.

The sounds a katydid produces are made by rubbing its forewings together. Each song is unique to the katydids’ purpose, such as territorial, aggressive, defensive, or mate calling. Katydids live a primarily solitary life, with approximately 255 species in North America and 20 in the Midwest.

They prefer to feed in open woods, jungles, and rural areas with much greenery and small vertebrates to sustain them. Unlike other types of grasshoppers, the katydid rarely causes damage to crops and garden plants.

Like its name, the long-horned meadow grasshopper resides in marshy areas by streams, ponds, and lakes where meadows and pastures can be found. The Chorthippus curtipennis is the only flightless grasshopper species.

Of the 80 species that are Palearctic, the meadow or otherwise known as the marsh meadow and short-winged grasshopper, inhabit the Nearctic region of Canada and the Western and Northern states.

However, they can be found on the coasts of Europe, Scandinavia, Southern Spain, and the British Isles. Unlike other grasshopper species, the Chorthippus curtipennis stays close to home and are most active during the day.

The Neoconocephalus matures at four centimeters in length and is known for its cone-shaped head. Another long-horned hopper, the cone-headed grasshopper, got its name from its unique appearance.

These grasshoppers hide in tall reeds or grass and have strong jaws that will bite if picked up.

Cone-headed grasshoppers are considered pests as they feed on corn fields, thickets, and open fields where crops are planted. Like other long-horned species, the cone head hopper lives a solitary life, only gathering during mating season.

Similar to the habits of a locust, this short-horned Melanoplus ponderosus swarms together in large masses to feast on crops and vegetation. The spur-throated grasshopper feeds on almost anything, ranging from different crops to wheat and seeds to grass and flowers.

You can spot spur throats in fields, meadows, and fertile land anywhere in Canada and the US. However, they have also been sighted in parts of Iowa, Montana, Mexico, and Minnesota.

Being the most popular species in North America, these brown, red, green, and yellow hoppers lay many eggs in fertile soil in which up to 20 nymphs are born each summer.

Lubber grasshoppers, scientifically named Romalea Microptera, are another short-horned grasshopper that is the slowest yet one of the largest species worldwide.

Although not wingless, lubbers are flightless grasshoppers. Lubbers grow up to 3 inches long. Like most short-horned hoppers, these entirely black with yellow striped hoppers swarm in groups and are considered crop pests.

Lubbers prefer to feed on orchid flowers, mainly found along roadsides and open fields, ingesting as much crop and vegetation as possible. Depending on the type of lubber spotted will depend on what appearance they have.

Though the most common lubber is black with yellow stripes, other types of lubber show different characteristics:

These dark brown or black hoppers can be found in marshy areas or wetlands covering much of the Pacific Northwest, Idaho, Montana, and Nevada.

Slant-faced hoppers are one of the Orthoptera families in which females and males look different. A female slant-faced is usually bright green and tan, whereas a male is black and brown with pale yellow stripes.

Perhaps one of the smallest grasshoppers is the Tetrigidae hopper, the pygmy grasshopper, or the grouse locust maturing 15mm long. Despite their name – grouse locust – pygmy hoppers don’t form in large groups, so they aren’t a threat to crops and vegetation.

Unlike other grasshoppers, the pygmy doesn’t generate or produce songs or audible sounds. These significantly small brown creatures reside along aquatic habitats and feed on short grasses and muddy fields.

Locusts have been around for millions of years, dating back to ancient Egypt in 3,200 BC, continuously ruining crops and farmlands as they band together in large swarms. Locusts are a special kind of grasshopper and are known as the most harmful species of grasshopper.

Scientists call the locust gregarious due to their ability to change behavior at any given time. The gregarious phase happens when rainfall and moisture hit the Earth’s surface, and they sense others around them, producing rapidly and increasing numbers.

During the gregarious phase, the locust changes their physiology, color, and size. Unlike other grasshopper species who repel each other, locusts attract each other and form large formations destroying nearly everything in their path.

Locusts live in almost every continent, though, before the gregarious phase, they tend to stay in locations such as South America and Asia.

Things to Consider About Grasshoppers 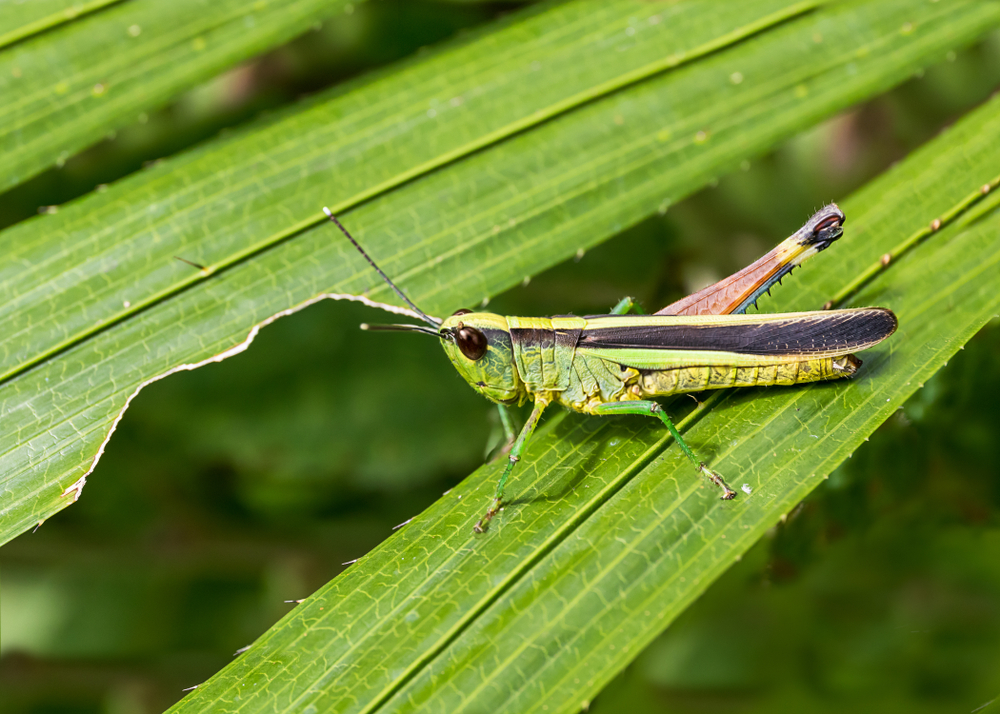 While some grasshopper species are friendly and non-harmful, others, like some short-horned families, are. Grasshoppers are essential to the ecosystem as they provide food for many wildlife and play an important role in nutrient cycling.

On the other hand, too many grasshoppers or swarms, such as locusts, can deteriorate everything in its path, which is bad news for farmers and consumers alike.

Some more amazing fun facts about grasshoppers are as follows:

As interesting as the Caelifera is, grasshoppers have existed on Earth as both a plague and beneficiary for millions of years. While some are friendly, others are deadly. Some common questions are as follows:

What is a Locust vs. a Grasshopper?

Locusts are from the same subspecies as short-horned grasshoppers and are similar to each other, though there is one significant difference. Locusts are solitary most of – if not all – of their lives except for when weather conditions become extremely and suddenly wet.

When weather conditions are perfect, locusts change from solitary to gregarious, changing their aspects and characteristics to form a dangerous and destructive swarm. Out of the 8000 species of grasshoppers, 10 of them morph into locusts.

What colors are Grasshoppers?

Grasshoppers come in many colors ranging from bright and dark greens to gray, brown, and yellow. Depending on their environment will decipher which color, how big, and what type of species of grasshopper there is.

For example, some long-horned grasshoppers live in tropical forests; therefore, their bodies will be larger and more green. A grasshopper living in wet marshes and aquatic regions such as the pygmy is slightly smaller and grayer.

What is the most common grasshopper?

There is no correct answer for which is the most common hopper. However, the meadow grasshopper is less fussy regarding diet and habitat. The March grasshopper is the opposite and likes habitats of a specific temperature and environment.

In North America, the katydid is the most sighted and familiar, as they are found feeding in temperate areas with lush greenery.

What is the rarest grasshopper?

While most grasshoppers won’t harm humans, many species are harmful to crops and plantations worldwide. However, it is safe to pick them up and let them go, although if they feel threatened, they may bite, kick, or regurgitate.

So, What Are the Main Types of Grasshoppers?

Grasshoppers are found in almost every continent, with over 8,000 popular species. However, each grasshopper falls into two subspecies: the short-horned and the long-horned grasshopper.

Of course, there are migratory hoppers, including the slant-faced and band-winged hoppers. The most common species worldwide and perhaps the most known is the short-horned group of locusts.

Locusts can be any grasshopper that changes its physiology during sudden wet temperatures. Perhaps the most sighted grasshoppers fall into the long-horned subspecies, much like the katydid, which got its name for its unique song “kay-did, kay-didn’t.”

Since meadow grasshoppers are not picky eaters, they can live almost anywhere and are also the most sighted, long-horned species. Grasshoppers are beneficial to the environment.

The various types and species do wonders for the natural world and its inhabitants. So the next time you see one in your lawn or garden, we say let it be — it’ll do a great deal of good for your vegetation!