We all enjoy receiving flowers as gifts when marking different occasions. Flowers are present on almost all occasions in our lives. Be it a birthday, anniversary, baby shower, or funeral; flowers find their way into these events.

But have you ever wondered what the basic structure of a flower is? Although flower anatomy can get complicated, in this article, we shall only focus on the basics- the parts of a flower that are essential for its reproduction.

Parts of a Flower: A Summary 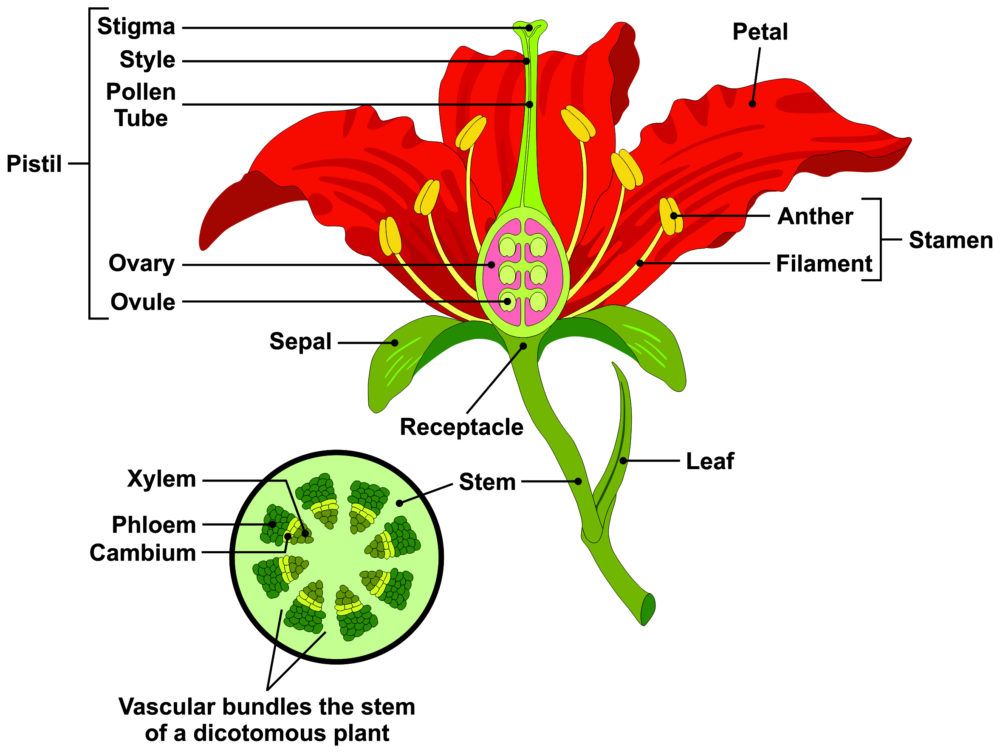 The basic structure of a flower can be divided into two parts:

The stamen is the male reproductive organ of a flower. It is also known as the androecium. Each stamen is made up of two parts:

The filament is the part of the stamen, the male reproductive organ of a flower, that supports the anther. The anther is where pollen, the male gametes, is produced. Filaments can be composed of either one unbranched strand or many-branched strands.

They can also be variously shaped and positioned within the flower. The primary function of filaments is to support the anthers so that they can release pollen into the air or onto an animal’s body for transport to another flower.

Some flowers have particular adaptations to ensure that pollen is transported to other individuals of their species for fertilization.

For example, some fouling nectarines have long filaments that cause insects to brush against the anthers as they feed, which helps to transfer pollen. In addition, filaments provide a structure on which the anthers can rely for support.

The anther is the male reproductive organ of a flower. It produces pollen, which is required for fertilization. The anther is typically located at the male filament’s top of the stamen. During pollination, the pollen is transferred to the female pistil.

The anther plays an essential role in the sexual reproduction of plants. Self-pollinated flowers do not need to produce large amounts of pollen, as there is no need to attract pollinators.

However, flowers that are cross-pollinated must produce large amounts of pollen to ensure that fertilization takes place. The anthers are often brightly colored and fragrant to attract pollinators such as bees and butterflies.

In some cases, the anthers may be hidden from view, such as in orchids. In these flowers, pollination is achieved by deception, with the flowers tricking the pollinators into transferring pollen without providing any rewards.

stigma is the part of a flower’s pistil, or female reproductive organ, that receives pollen during pollination. The stigma is often Located at the tip of the pistil and is usually sticky, which helps to trap pollen grains and ensure fertilization of the ovules.

The stigma can have a variety of shapes and sizes, depending on the type of flower, but it is typically long and slender to trap pollen efficiently. The stigma also plays a vital role in controlling the size and number of pollen grains that are deposited on it.

Too much pollen can overwhelm the ovules and prevent fertilization, while too little can result in unsuccessful pollination. Therefore, the stigma must have just the right stickiness to ensure successful fertilization.

The flower style is a narrow, tubular structure that extends from the ovary to the stigma. Its main function is to provide a pathway for pollen to travel from the stigma to the ovary, where fertilization occurs.

The style is often surrounded by one or more petals, which act as barriers to preventing self-fertilization.

In some flowers, the style is divided into separate compartments, each receptive to pollen from a different individual. This ensures that cross-fertilization occurs, which is essential for seed production.

The style also plays a role in controlling the timing of pollination, as it can open and close in response to changes in temperature and humidity. The characteristics of a flower’s style can significantly impact its ability to reproduce successfully.

The ovary is the female reproductive organ of a flower. It contains the ovules, which are the cells that eventually become seeds. The ovary also has several other vital functions, including:

It may also be either green or colored. The outermost layer of the ovary is called the episperm, and its function is to protect the inner layers from damage.

When the seeds are mature, the ovary will rupture and release them. The ovary will then begin to grow into a fruit, which will protect the seeds and help them to disperse. Ovaries are classified into three types according to their positioning.

In botany, a superior ovary is an ovary that is positioned above the point of attachment of the flower to the stem. This arrangement is considered to be the “normal” or “default” position for an ovary, and as such, the term “superior ovary” is often used interchangeably with “ovary.”

However, there are some notable exceptions to this rule. For example, in many species of nightshade (Solanaceae), the flower’s pedicel attaches to the side of the ovary. In these cases, the ovary is said to be “inferior.”

Other exceptions include certain members of the Orchidaceae, in which the ovary is positioned below the rest of the flower. In general, however, a superior ovary sits at or near the apex of the flower.

The half-inferior ovary is an ovary positioned halfway between the base and the apex of the flower. This type of ovary is relatively rare, and it is found in a small number of plant families, including Nyctaginaceae and Onagraceae.

This type of ovary contains equal parts of the ovary above and below the entry point. In most classifications, however, they tend to be classified either as superior or inferior.

In botany, an inferior ovary is an ovary positioned below the point of attachment of the flower to the stem. This arrangement is found in various plant families, including the Solanaceae, the Orchidaceae, and the Asteraceae.

Inferior ovaries are often considered “unusual,” as the vast majority of flower ovaries are positioned at or near the apex of the flower.

Flowers with this kind of ovary are referred to as epigynous. This type of flower contrasts hypogynous flowers, in which the stigma is positioned below the ovary.

Petals are the colorful parts of a flower that are often associated with its fragrance. They are usually located in the center of the flower, surrounded by its stamens (the male reproductive organs).

The petals of a flower play an important role in attracting pollinators, such as bees and butterflies. The bright colors and interesting patterns on the petals guide pollinators, leading them to the flower’s nectar.

The petals also protect the flower’s reproductive organs from damage. The petals may also produce sound or scent in some flowers to attract pollinators. Some petals are even edible! Thus, petals play an important role in the reproduction of flowering plants.

The sepals of a flower are the leaf-like structures that encase the bud. They serve several important functions, including protecting the bud from damage and supporting the developing flower.

Once the flower has bloomed, the sepals help to protect the pollen and ovules from being eaten by predators. In some flowers, the sepals may also play a role in attracting pollinators.

For example, the showy petals of a sunflower are modified sepals that help to attract bees. Sepals come in a wide range of shapes and sizes but are typically green in color. This helps them blend in with the plant’s leaves, making it more difficult for predators to spot them.

Additionally, sepals are essential in ensuring that a flower is correctly oriented as it grows. This ensures that the flower can receive ample sunlight and nutrients for proper development.

A nectary is a secretory structure within a plant that produces and stores nectar. Nectar is a sugary solution that plants produce to attract pollinators such as bees, birds, and bats.

These animals visit the flowers in search of nectar, and their movements help spread pollen from the stamen to the flower’s pistil, resulting in fertilization and the production of seed.

Nectaries can be found in various plant organs, including leaves, stems, roots, and flowers. The nectaries in flowers are often highly visible and are an important part of the plant’s reproductive strategy.

The sweet taste and fragrance of the nectar are used to lure pollinators to the flower, where they will hopefully transfer pollen and help with reproduction. 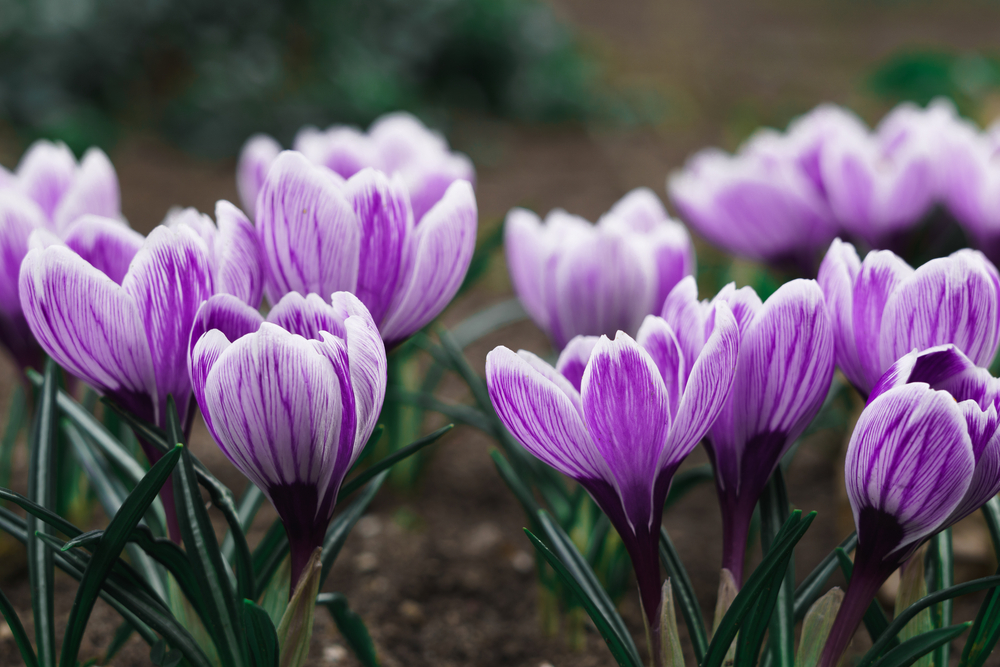 Often when talking about flowers, you will hear certain terms used to describe different parts or features of the flower. Here is a brief description of some of these terms:

What is an ovule?

An ovule is a small structure inside the flower’s ovary that contains the plant’s female gametes.

What does pollen do?

Pollen is required for fertilization to occur. Pollen is transferred from plant to plant by animals and insects called pollinators- bees, for example. When a bee stops on a flower, it gets pollen on its feet, which is transferred to the next flower when the bee moves on. Through this process, pollination occurs.

The process of transferring pollen from the stamen to the pistil of a flower. Pollination is necessary for fertilization and the production of seeds.

What is flower fertilization?

The process by which a plant’s male and female gametes fuse to form a zygote.

What is a zygote?

A single cell that results from the fusion of two gametes. The zygote will grow and develop into a new seed.

So, What Are the Parts of a Flower?

In conclusion, flowers are beautiful and intricate parts of nature that play an essential role in the reproduction of plants. The different parts of a flower each serve a specific purpose, from attracting pollinators to protecting the developing seed.

So, the next time you see a flower, take a moment to appreciate all the fantastic work that went into its creation. Happy planting!