The parts of a door knob are fairly simple. This includes the knob, the lock, the bolt mechanism, and the hardware. But what is the function of each? Don’t worry — you’re in the right place. Read on to learn more.

These are the simplest and most common parts of standard doorknobs. To understand how they all work together, check out this quick video.

When things are working right, no one spends much time thinking about the parts of a doorknob. But when your door isn’t latching, the knob isn’t behaving right, or you’re working on an upgrade, knowing the parts that make a doorknob work can be very handy.

Let’s look at doorknobs so that if you ever need to work on one, you know how they work and what parts are likely to require repair. 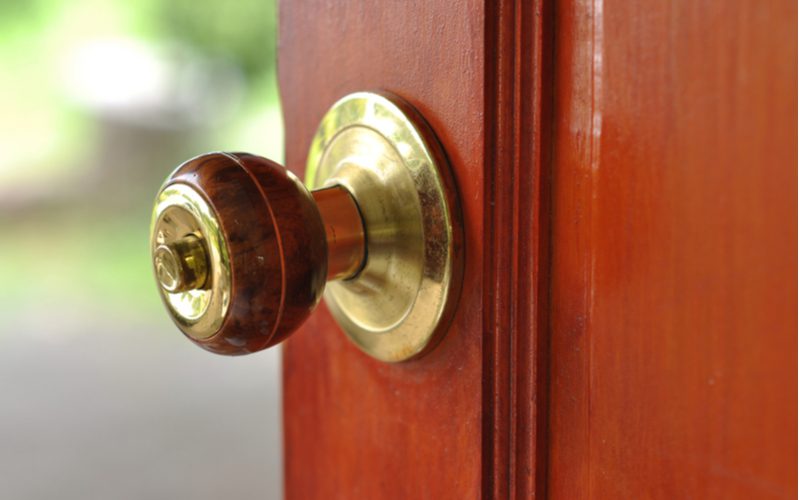 A typical doorknob is inexpensive, easy to mount, and pretty reliable. But, doorknobs range from simple stainless steel without locks or adornments to fancy models made of brass, crystal, or even more exotic materials.

There is also a big difference between exterior door knobs and interior doorknobs. Interior knobs often don’t have locks, and even when they do, they’re not usually tamper-proof.

On the other hand, the design of exterior door knobs needs to be tougher and more secure to stand up to potential tampering from burglars.

Here’s a quick look at some of the different doorknob finishes you can buy in no particular order. You can also request custom finishes, but those can be pretty pricey. 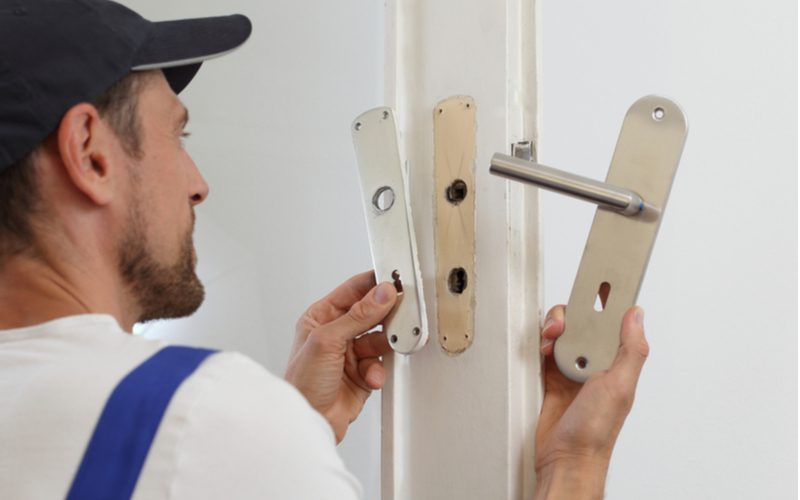 Each door knob secures to the door with pieces of hardware like screws and other metal pieces. There are various styles and manufacturers, but typically there are two screws that hold a mounting plate to the door on one side.

Then, the other side of the doorknob attaches to the mounting plate with two more screws. Sometimes, the screws remain hidden by a plate for a clean, finished look. 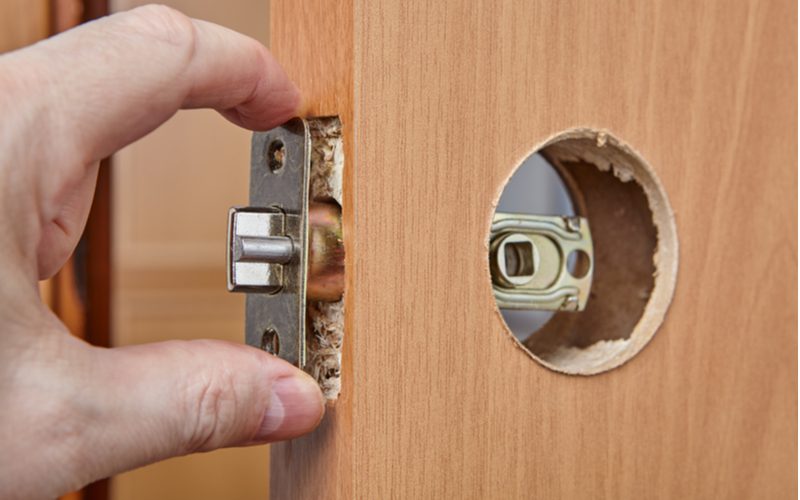 To securely hold a door closed, a bolt extends from inside the knob, out of the door, and into the door’s frame. The bolting mechanism itself retracts the bolt when you turn the knob, allowing the door to swing open.

Then, when you release the doorknob, it returns to its original position, retracting the bolt. Many knobs also have a lock that keeps the knob from turning when it’s engaged. This prevents the bolt from moving, holding the door secured to the frame.

Doorknob Parts and Their Functions

Let’s take examine the parts of doorknobs a bit more. 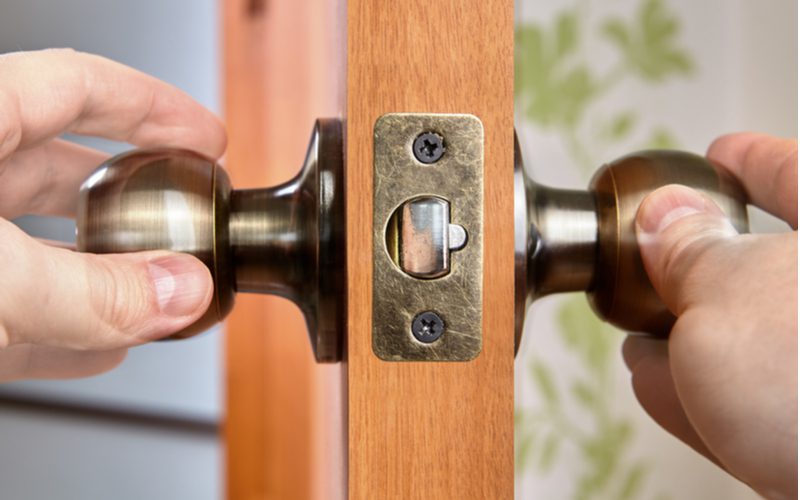 The strike plate mounts to the door’s frame. First, using a drill or chisel, make a space in the frame to accommodate the bolt and the strike plate itself. A template often comes with a new knob, so you know exactly where to modify the frame.

The strike plate itself is pretty thin, but the hole in the frame for the bolt goes a bit deeper. Now, using provided screws, the strike plate sets flush into the frame. 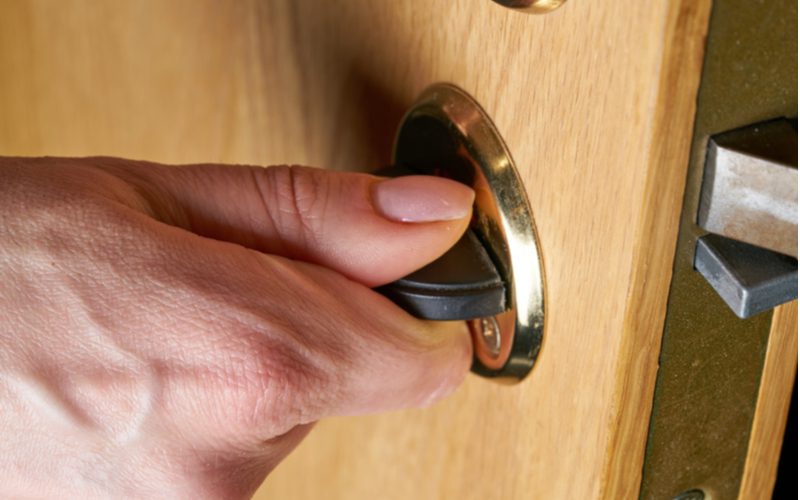 Door knobs feature a wide variety of locks and latches. There are integrated locks that are part of the knob itself, and sometimes there is a lock, deadbolt, or latch elsewhere on the door. Internally, a doorknob lock prevents the knob from turning.

By not allowing the ratcheting motion of the knob, the bolt remains secured inside of the strike plate and frame, and the door remains secure. Release the lock, and the knob turns freely, allowing you to retract the bolt and open the door. 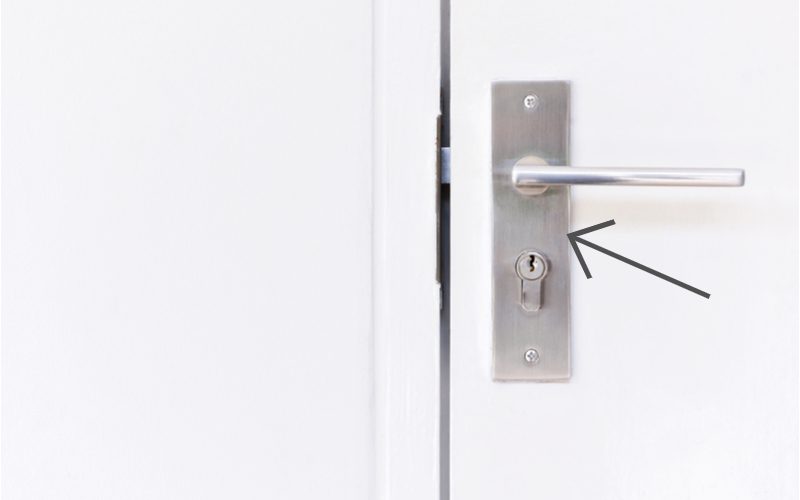 Backplates and rosettes perform a couple of roles. They sometimes are part of the mounting system for a doorknob. And, they also provide a cover that hides the shaft of the knob and rough cutaway in the door.

Without a backplate and a rosette, you would see the exposed wood or other material cut away to accommodate the installation of the knob. Rosettes and backplates can also add a bit of style to your doorknob and the other features of your door.

For instance, you may see a rosette with an inlaid design and a latch for locking the door. Sometimes backplates or rosettes match the trim of a door to minimize their appearance.

Other times they add contrast or character. For instance, on some antique presentations, a darkly-colored wood door may have brass adornments. 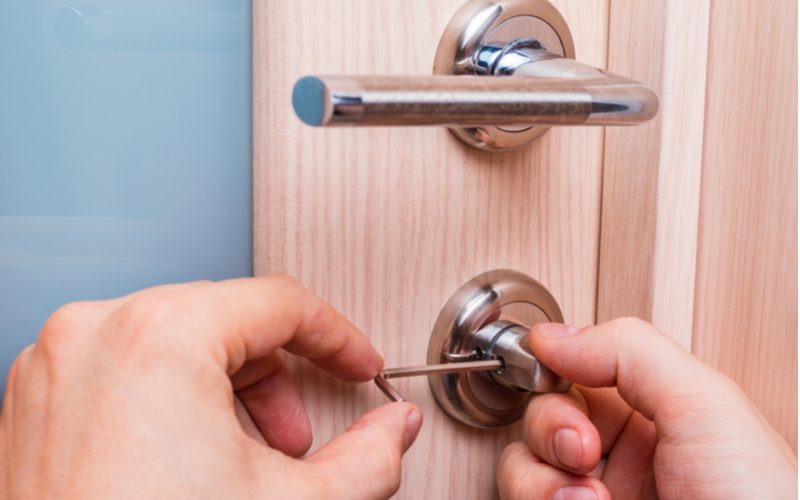 Some door knobs have a completely hidden mechanism for installation and removal. Instead of having an exposed screw on the backing plate, there is a small, almost invisible set screw along the shaft of the doorknob itself.

Using a screwdriver, or sometimes a special tool, allows you to loosen the knob so you can then remove it from the rest of the assembly and work on the inner mechanism. Then you can reattach the knob and retighten the set screw. 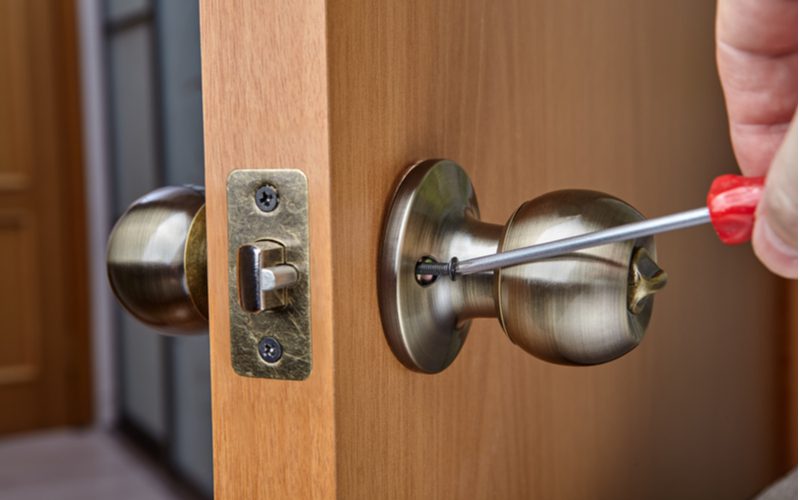 Some doorknob questions come up quite often. Fortunately for you, we’ve rounded up the most frequently asked ones below.

Can I Install a New Door Knob Myself?

What About Putting a Door Knob on a Brand New Door?

This is where things can get quite a bit more complicated. Installing a new doorknob and bolt requires some carpentry and DIY skills with tools. Some new doors make a new doorknob installation easier on the homeowner.

They come with the hinges and knob cuts already made. This is by far the simplest, easiest way to install a new doorknob. If those rough cuts aren’t pre-made, you’ll have to drill out a precise hole for your doorknob and the internal mechanism.

Why Are There So Many Types of Door Knobs?

So, it should not be a surprise for you that there are many doorknobs sold in stores. And, also consider that the ADA requires certain types of doors and doorknobs on public buildings to be freely accessible to all people, even those of us with limited mobility.

So, What Are the Parts of a Doorknob?

From the outside, looking at a doorknob, they may seem simple. Internally, the parts that make them work are a bit more complicated. But they are usually something a homeowner can work on and replace as needed.

Sometimes, the best way to see how something works is to take it apart. Once you remove an existing doorknob from a door, it’s pretty easy to bring it to a hardware or other big box store and ask for help finding a replacement.

Bring it home and try to install it. You’ll be surprised how quick and easy it is to do. Then, if you are replacing many similar knobs, you can use the replacement you found in the store to order more online and probably save some money in the process.