Are you thinking about changing your master bathroom layout? Here are some design considerations and principles to keep in mind when you’re coming up with your design. These tips will change your design game!

The fundamental principles for a master bathroom layout are:

What Is a Master Bathroom? 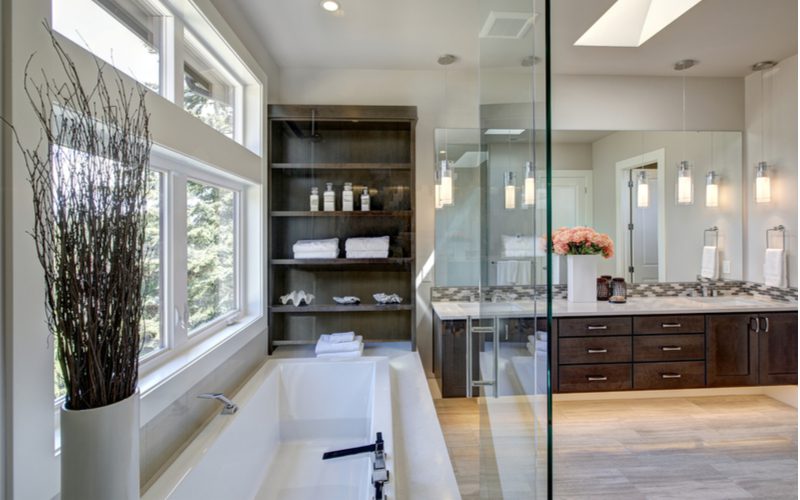 Before we discuss the design principles in detail, we need to clarify this point. A master bathroom is a bathroom that has both a shower and a bathtub, either separate or combined, that connects directly to the biggest bedroom in a house.

If a bathroom only has a shower, it isn’t technically a master bathroom, even if some advertising material may refer to it as such. Such rooms are known as 3/4 bathrooms instead.

Most master bathrooms follow a “corridor” design style where things are on one or both sides of a central walkway accessible from the door.

Depending on home design, this corridor could be straight down from the door or come after a 90-degree turn immediately after entering the room. Other variations on the entryway are unusual. Doors typically swing into the bathroom and away from the bedroom.

Ideally, the door won’t block access to anything while it’s open, but users may need to close the door to access something in certain building designs.

Many master bathrooms put the sink as close as possible to the door, running parallel to the main corridor and often on the right-hand side.

Most people are right-handed, so sinks (including countertops) are placed so that it’s as easy as possible for people to reach out and grab things when they enter.

Toilets tend to be on the far side of the room, often with a wall for privacy since master bathrooms are often shared by two people. Showers and tubs are usually along the side of the corridor opposite the sink, or at the far end of the bathroom.

Naturally, the details can vary based on household design and how much room you have. In larger homes, the sinks may be in a small room by themselves, with the toilet, bath, and shower through other doors.

Houses with small bathrooms may omit privacy stalls and keep things closer together. Outside of these design principles, there are a few other points to keep in mind when creating a good master bathroom layout.

1. Minimize How Many Things The Room Has 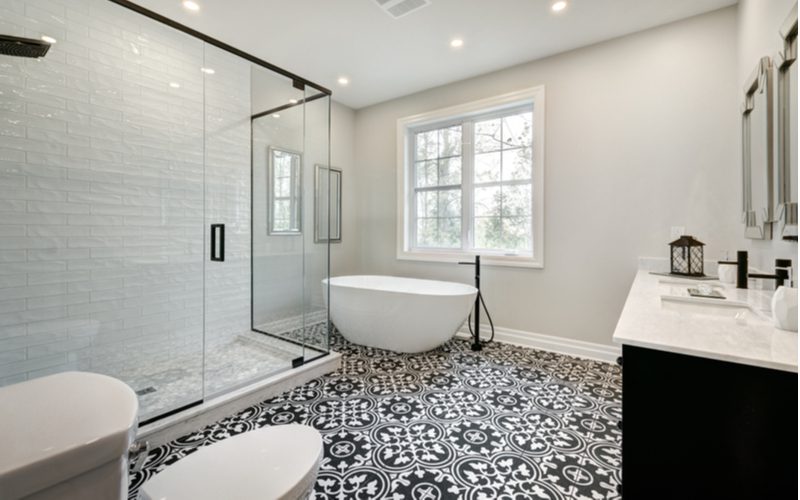 Bathrooms tend to work best when they feel open and uncluttered. The slight exception is toilets, where a privacy wall can add a feeling of safety and privacy. It’s usually better to avoid adding too many things to the room that don’t need to be there.

For example, instead of covering a wall in art, it’s often better to have a single piece on display. Similarly, the room should have no more than one window along a wall and, optionally, a single skylight.

Only separate the shower and the tub in the master bathroom if you have enough space to do so comfortably. Otherwise, it’s better to combine the two and use the extra space for something else.

Sinks and counters usually cover most or all of one side within a bathroom, stopping short only to fit in a toilet or tub. Most master bathrooms have at least one window. Windows can go almost anywhere.

But common locations include directly across from the door, between two sinks, or between a sink and a tub. Make sure to avoid putting the sink directly next to the toilet because that runs the risk of people bumping into the windowsill when they’re getting up. 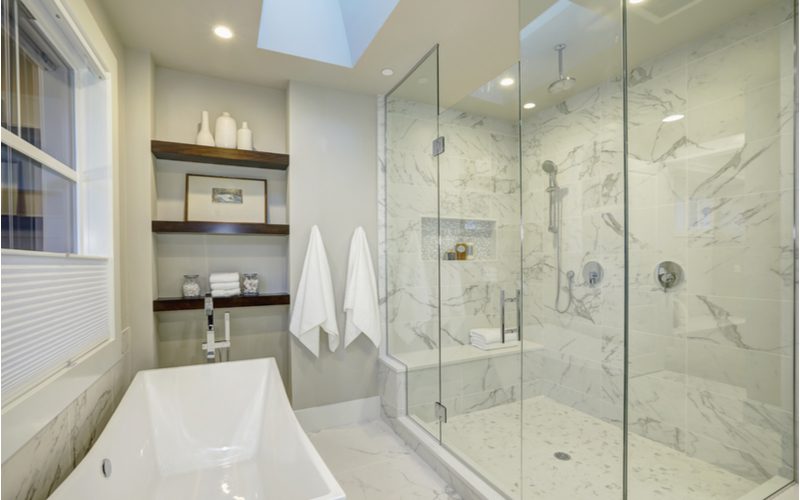 Minimizing is important, but doing so effectively often involves adding storage in the right places. The natural place to do this is under sinks, which is why most bathrooms have large cabinets with sinks on top rather than freestanding basins.

Countertops in bathrooms tend to fill with clutter unless you actively take measures against that. One option for controlling a mess is grouping same-color things and turning them into an impromptu art display.

This can help maintain a feeling of order even when a countertop is busy. Some people add a shelf or two as secondary storage.

These are usually close to the toilet and can hold extra toilet paper rolls or other supplies as necessary. Chemicals should usually go out of sight. Shower and tub-based storage are also helpful when possible.

Many people hang small shelves from showerheads or buy shower and tub designs that have flat areas for holding shampoo bottles and other common-use items. That leads us to our next point, which is one of the most crucial principles for any master bathroom layout. 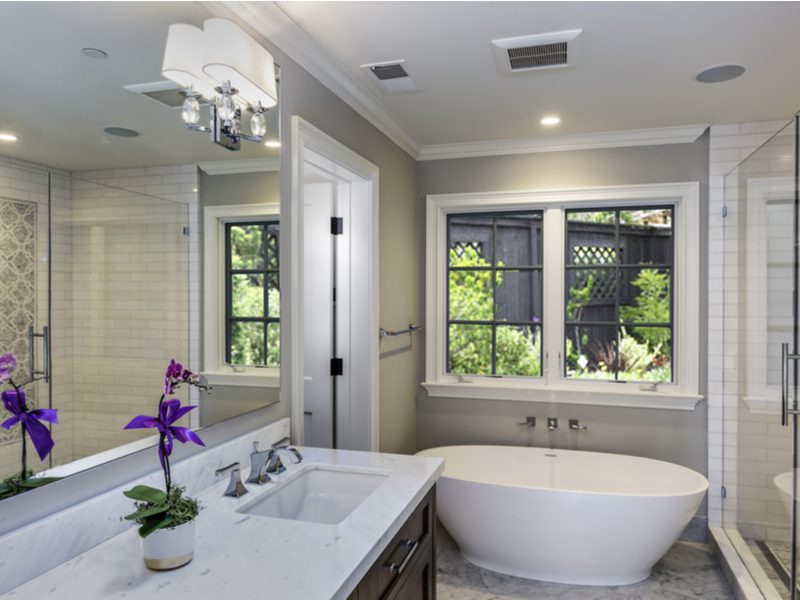 Ideally, a master bathroom layout keeps as many things as possible close to where you use them. This means keeping toilet paper near a toilet, shampoo and other bathing items in or next to a bathing area, and towels as close as possible.

The ideal location for anything in a bathroom is within arm’s reach, preferably without leaning, of wherever people are likely to use it. Doing this helps ensure that a bathroom feels smooth and functional at all times.

If people have to get up and walk across the bathroom to pick up supplies or grab a towel, that’s inconvenient. Don’t be afraid to get creative if you need to manipulate your space better.

For example, most people put towels on a long bar for easy access. However, if your bathroom doesn’t have space for that, you might want to install a hook in the wall or ceiling to hang a towel from.

A less obvious consideration for keeping things in reach is the plumbing. Ideally, things like water lines will have as few turns as possible and be as short as you can get away with. Minimizing piping reduces the chance of problems and leaks later on.

4. Have a Main Feature 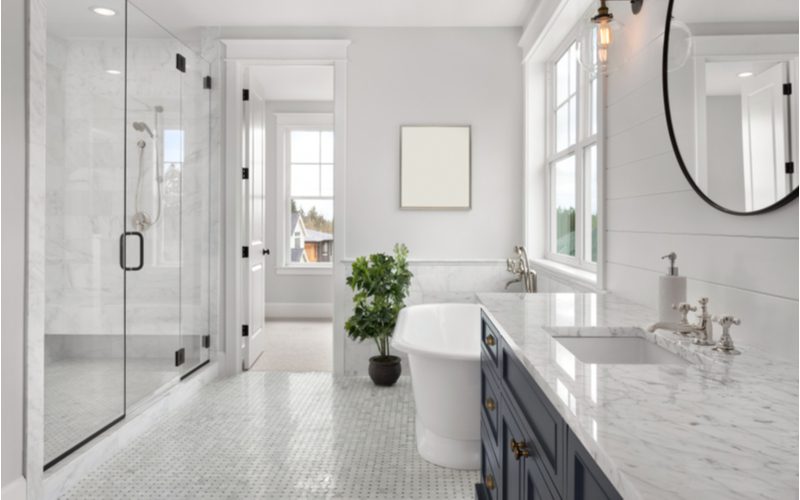 The main features tie into the idea of minimizing things, but it deserves a separate mention. The main feature is the primary highlight of a bathroom, which can draw attention when you enter and serve as the focal point for other design options within a room.

The main feature can be a physical component of the room, like an ornate window or an elaborate tub. However, it can also be a color, like a large black area in an otherwise-white room.

It doesn’t matter what the feature is as long as you have one. Don’t forget to consider the effect of lighting on your main feature. Something may look nice in a store.

But uglier when you bring it home and see it under the lights you use. Most people use a warm yellow color in the 2700K-3000K range for bathrooms, whereas stores usually have brighter, 5000K lights. 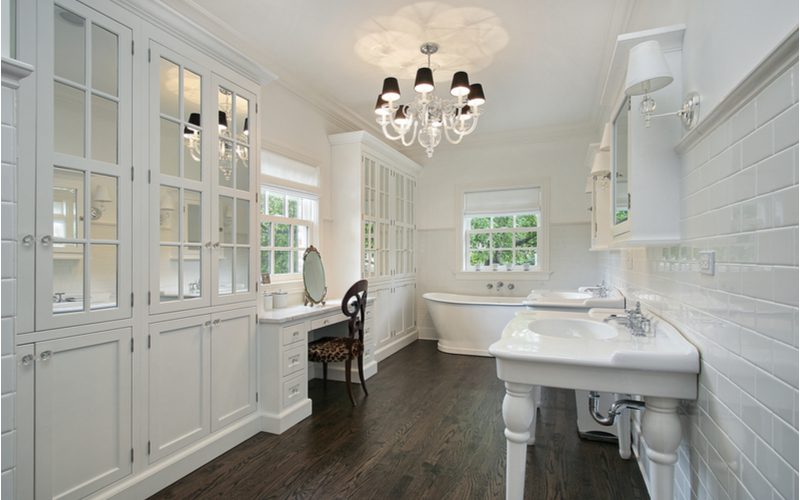 Colors are the final aspect of a good master bathroom layout. The right color choices can make something work when it otherwise wouldn’t. This is particularly important because master bathrooms tend to be one of the smaller rooms in a house.

That’s not always true – I’ve been in some shockingly large master baths – but they certainly trend small. Smart use of colors can make a small bathroom feel much larger, making the entire room feel far more comfortable.

You can augment this with mirrors. Ideally, you’ll have one large mirror running the full length of the sink, or two mirrors with a break in the middle if you have a window interrupting things.

Mirrors create an illusion of space, but they also reflect the colors put into them. That’s why it’s important to consider the angle of your colors and how they’ll show up in a mirror when you’re designing the room. 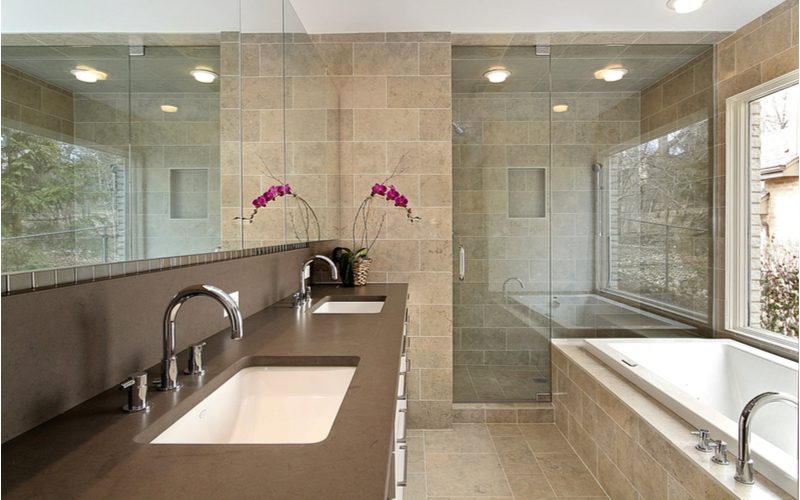 Here are some of the most common questions people have about master bathroom layouts.

Is it better to have a window in your bathroom?

Yes. Generally, bathrooms should have at least one window when possible. I grew up in a home where my bathroom didn’t have a window, and it was much more awkward and inconvenient during times when the power went out.

Even aside from the practical value of having a natural light source, windows make bathrooms feel more inviting. If you’re worried about privacy, you can use obscure glass to block sight while still allowing light through.

As a secondary benefit, windows provide an additional ventilation option and can help cool a bathroom during warmer summers. Windows set into a wall should be openable, while skylights don’t need that trait.

Finally, many people like growing plants in their bathrooms, and windows make this much more viable. Master bathrooms rarely get light for the whole day, but adding bigger windows will support plants that prefer additional light.

What is the standard size for a master bathroom?

Why is the toilet always next to the shower?

Toilets aren’t always next to showers, but that is a common design choice. The main reason for keeping them close together is that both components require a lot of plumbing and it’s easier to put them next to each other. The goal is to minimize how many feet of plumbing pipes you need, so this is a straightforward and effective design.

Is it bad to have a window in the shower?

Try to avoid having windows inside showers, especially if the window is close to where the showerhead points. This can lead to water getting into cracks around the window and damaging things. Ideally, a window will be at least a foot or two away from a shower or tub, and on the other side of a door or curtain in the case of showers.

What do buyers want in a master bathroom?

As you learned here today, there are many things to keep in mind when designing a master bathroom layout. The good news is that most of these design choices are fairly standard.

So it’s easy to find components that match. If possible, try to sketch out how you want your bathroom to look before you start any remodeling or construction projects.