But ivy is also a hard-to-kill invasive non-native species that can cause kill trees, displace native plants, and damage fences and other structures.

Getting rid of ivy calls for an integrated approach involving manually cutting and removing vines and roots and, usually, following up with pesticides, often more than once. 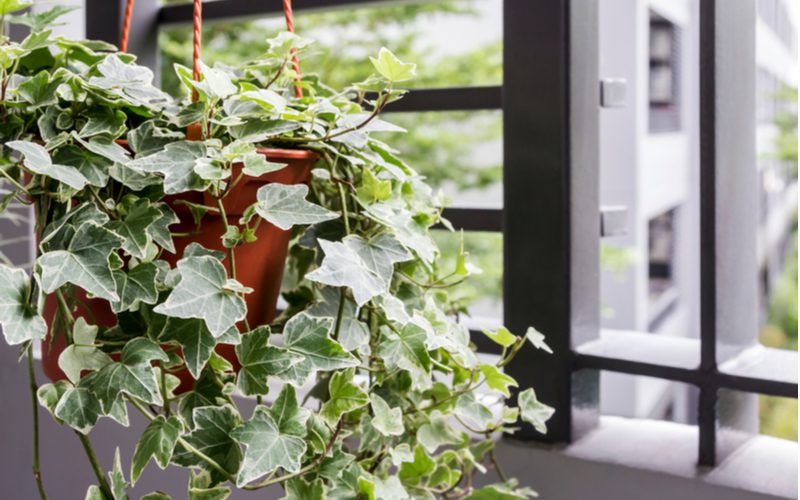 Ivy, also known as English ivy, goes by the scientific name of Hedera helix. Colonists brought it from Europe around 1800, and now it grows in gardens and forests over much of the United States.

Ivy’s range goes from Massachusetts to South Carolina in the East and in the South as far west as Texas. It is not well-suited to the arid Southwest. But ivy is a significant problem in the Pacific Northwest, where it displaces native species and can damage and even kill large trees.

Oregon bans planting or transporting ivy. Ivy grows as a flat mat up to a foot thick. The vines spread along the ground until they meet a tree, post, fence, wall, or similar structure, at which point they go vertical.

Ivy’s clinging tendrils allow it to grow as high as the tops of 300-foot trees. It produces berries, but neither the fruit nor the leaves are eaten much by native wildlife. While thick patches of ivy create habitats for rats, other woodland animals do not prefer it.

How to Kill Ivy: A Summary

Persistence is probably the commodity most needed by anyone who plans to eradicate a strongly growing stand of ivy. The most effective approach involves lots of manual labor and, often, repeated applications of pesticides.

Before starting on an ivy-killing project, gather these supplies:

You’ll also need your herbicide of choice. Glyphosate-based herbicides work best and are available from many garden retailers. If your ivy is particularly well-established, a small pruning saw could be useful for cutting through thicker vines. Ivy can live up to 50 years, and vines can grow up to a foot in diameter.

How to Kill Ivy in 6 Easy Steps

Manual removal is the first phase. Pulling up the vines and cutting the stalks is often necessary with ivy because its waxy leaves resist herbicides, so that purely chemical techniques may not work.

You may need somewhat different approaches depending on whether your ivy is growing on the ground, on a fence or building, or on a tree. However, here are the steps you’ll usually follow:

Pull the leafy strands off structures or up from the ground. Take care when removing ivy from bricks, as you can pull pieces of brick off with the vines. Go slowly and consider using a putty knife or spatula to pry the ivy loose. Also, vines may come loose more easily when damp.

Cut the thick, woody main vines a foot or so above the ground. Cutting these central vines alone may be enough to kill ivy that is climbing a tree or structure. However, the climbing vines may be easier to remove before they have died and dried out, becoming tough.

Dig and pull up the roots, using the vines you left as a handle. It’s important to get as many roots as you can, but it may not be possible to get it all. That is why the next part of the process is usually necessary.

Manually removing ivy may be enough to kill it completely, but usually, it takes more than that. To fully eradicate ivy by hand, you’ll need to go back and do it up to several times as the hard-to-kill vines come back from germinated seeds or missed roots.

One estimate by a study done in the Pacific Northwest put the cost of hiring workers to remove an acre of ivy manually at $2,000 to $8,000. Here’s the rest of the procedure when using herbicide after manual removal:

Select a glyphosate-based herbicide you can use straight from the bottle or mix it per directions.

After manual removal, spray the remaining roots with the glyphosate-based weed killer. Use a spray bottle for small areas or, if you have a lot of ivy to get rid of, a pump-spray applicator.

Don’t treat it and forget it! Instead, check where you’ve sprayed after a few days. Where the pesticide has been effective, the leaves should have turned brown. You may have to re-apply in spots where the leaves are still green. And be prepared to repeat the application if the ivy returns.

After you’ve dug up the ivy, dispose of it properly in a recycling bin. Don’t put ivy cuttings on your compost heap. The cuttings are likely to root, and the ivy will begin growing and spreading again.

Also, ivy can spread from seeds dropped by some of the bird species that eat the berries. So ivy can crop up just about anywhere or any time, requiring another eradication effort. 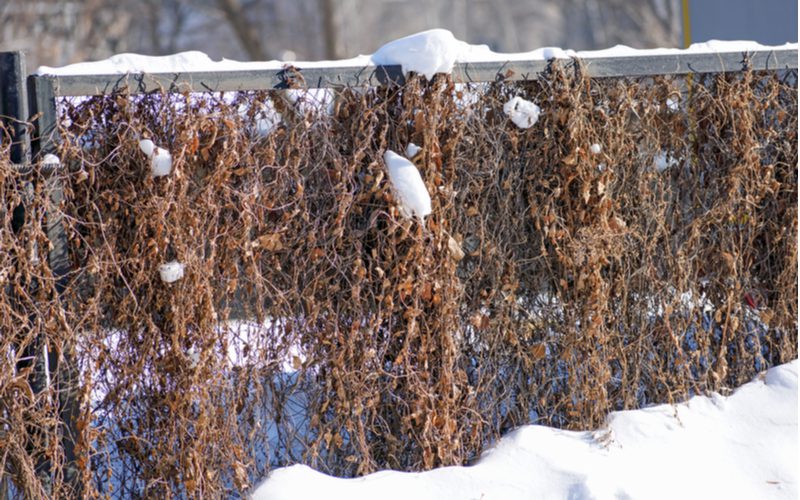 If you’re strongly opposed to using pesticides, you may be able to remove the ivy using some alternate approaches.

One way is to cover the entire area where the ivy grows on the ground with a heavy mulch of dead grass, leaves, or other material. A sufficiently thick layer will deprive the ivy of light, air, and water and, in time, kill it. You can also use newspapers, boxes, or black plastic sheeting in place of mulch.

The mulching method requires care to make sure the ivy is completely covered. Inspect the area a few days after you’ve placed the mulch. You’ll likely have to add more covering where the ivy gets through the mulch. It can take weeks before. Don’t remove the covering until you are sure the plants are completely dead.

Another approach is to get some goats. Studies have found that goats, as well as sheep, eat the ivy. Penning some of these animals where ivy grows and letting them feast on it can drastically reduce, if not eliminate, its presence in a landscape.

Spraying ivy with vinegar is also reported to work. Mix a gallon of water to a quart of white vinegar. Using a spray bottle or tank sprayer, spray the ivy until the leaves are well wetted down. Avoid getting the acidic mixture on other plants.

After a few days, some of the ivy will likely have turned brown. Remove the dead leaves and vines and respray the plants that are still green. Repeat this process until you’re satisfied with the results.

So, How Do You Kill Ivy? 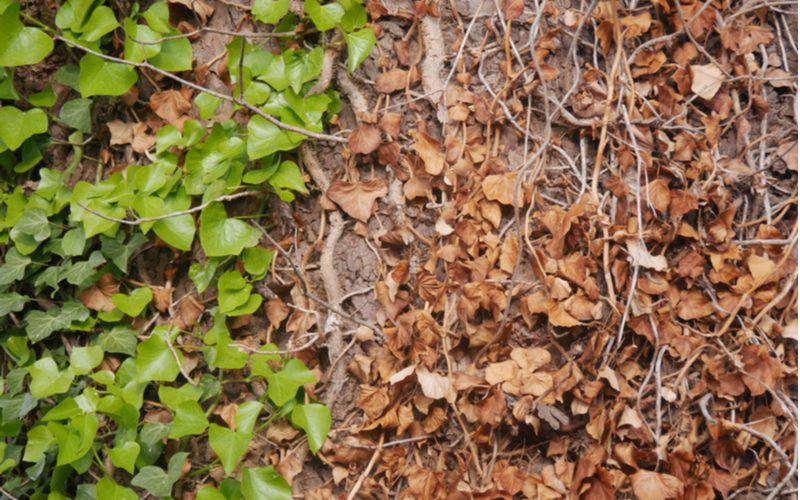 English ivy makes a thick ground cover with evergreen leaves that will grow in the thickest shade. It also climbs vigorously on walls, fences, trees, trellises, or any other vertical surface it encounters.

Ivy also has a dark side. It can kill trees and damage fences and other structures, and is hard to get rid of. To kill ivy, use an integrated approach of manually removing vines and roots and following up with a glyphosate-based chemical pesticide.

The process may have to be repeated, and new growth of ivy could start at any time. But once it’s been completely eradicated, invasive ivy can be replaced with a native groundcover or climbing vine that will look just as good without the problems.