There are hundreds, maybe even thousands, of famous buildings in the world, but you may wonder, which ones draw the biggest crowds and are the most recognizable? Five buildings in particular stand out as the most iconic and beloved sites on earth.

Most Famous Buildings in the World

In no particular order, the five most famous buildings in the world are:

People consider these the most famous because they are some of the most visited and most recognizable structures in the world. They’re also my all-time favorite. Read on to learn a little about each and see our runners-up.

About the World’s Most Famous Buildings

The most famous buildings are those which stand out for their beauty, their grandeur, and the story behind them. 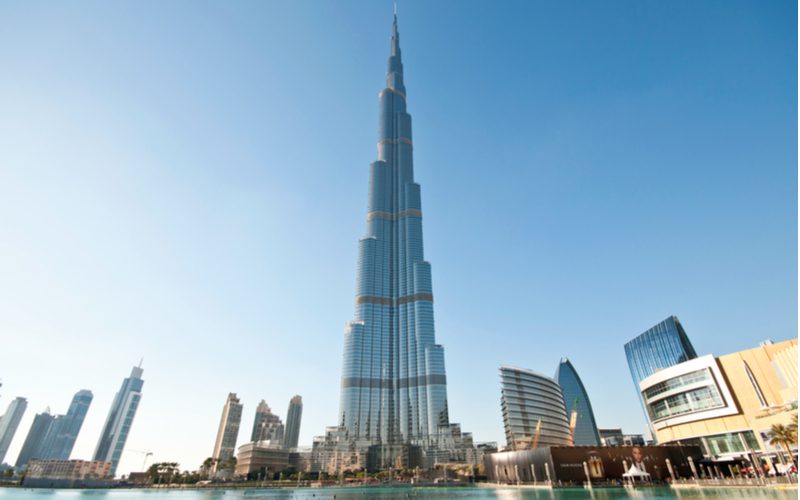 The Burj Khalifa became the tallest building in the world when Samsung C&T finished it in 2009. Originally called the Burj Dubai, the owners renamed the skyscraper to honor the ruler of Abu Dhabi and the president of the UAE, Khalifa bin Zayed Al Nahyan, before its inauguration in 2010.

The Burj Khalifa is a remarkable engineering feat that stands surrounded by the new developments of Downtown Dubai. Construction began in 2004, and Adrian Smith did the design.

A great building, it stands at 2,722 feet and overlooks the city of Dubai and the surrounding desert. Smith and other artists and architects based the design on the Islamic style of the region.

Built to show off the beauty and wealth of Dubai and the UAE, the Burj Khalifa has 163 floors, 57 elevators, eight escalators, 900 apartments, and 304 hotel rooms. The building houses modern fitness centers, indoor and outdoor swimming pools, jacuzzis, and lavish event spaces.

As the newest of the top five famous buildings, the Burj Khalifa has gotten an astounding amount of press notice. When it opened, the Khalifa was more than a thousand feet taller than the previous largest building, Taipei 101 in Taiwan.

Burj Khalifa attracts more than 1.8 million visitors every year and is the most visited tourist attraction in Dubai’s already well-visited city. The observation deck on the 124th floor is the top place people visit within the building. 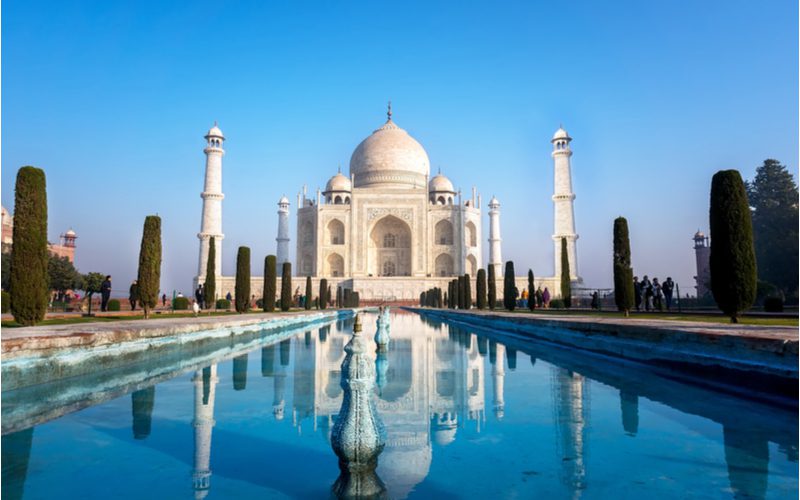 The Taj Mahal is one of the most recognizable buildings in the world, especially within India. Taj Mahal is actually a tomb that Emperor Shah Jahan built to memorialize his favorite wife, Arjumand Banu Begum, who died in childbirth in 1629.

The emperor was so distraught that he almost gave up the throne but instead decided to have a grand tomb built to honor her memory. The emperor brought together a council of the best architects in central Asia to create the mausoleum.

Ustad Isa Khan Effendi, a famous Persian architect, was the most probable designer of the building. Artisans traveled from as far away as Turkey to make the Taj Mahal as beautiful and grand as possible.

The building took 21 years to build, from 1632 to 1653. As many as 20,000 people helped to give the emperor the tomb that he wanted for his wife. By the end, the Taj Mahal stood as tall as a modern-day 20 story building. About 8 million people come to Agra every year in north-central India to see the monument.

The beauty and intricacy of the tomb is the most outstanding of its features. Many also enjoy the heartbreaking and romantic story behind it. The outside grounds match the original designs of Ali Mardan Khan so visitors can see the building as it originally was.

The walls still carry the Quranic inscriptions that designers carved centuries ago. Fumes from nearby factories have eroded parts of the building, but, for the most part, the Taj Mahal still looks as it did centuries ago.

I’ve been here and can attest that it’s spectacular. As with any famous building, at its core, it’s just a building. However, walking through the gardens and the building itself is a euphoric experience. I highly suggest checking it out — it’s worth the trip.

The Empire State Building is one of the most famous buildings in New York City. The enormous skyscraper is featured prominently in the New York City skyline and is on almost all New York City postcards.

John J. Raskob, Pierre S. du Pont, and former New York governor Al Smith bought the lot in 1928. The following year they decided to build the world’s largest building on the spot they had paid 16 million dollars to acquire.

Even though the skyscraper lost its record, it didn’t lose its fame. Featured prominently in “King Kong” and “An Affair to Remember,” the building receives four million visitors a year.

So many people buy tickets to venture up to the 86th-floor observation deck that the owners make $80 million a year from tourism alone.

Weighing in at 10,100 tons and standing 1,050 meters tall, Gustave Eiffel’s most famous creation has been an icon of Paris for over a century. With more than 7,000 metric tons of puddling iron used in its construction, the tower was at one point the tallest building in the world.

The Eiffel Tower held that record until the Chrysler Building opened in 1930. Remarkably, many Parisians at the time wanted the tower taken down and considered it an eyesore.

Fortunately, the Eiffel Tower has seven million people a year visiting, half of which come from outside of France to see its glory for themselves.

The Leaning Tower of Pisa 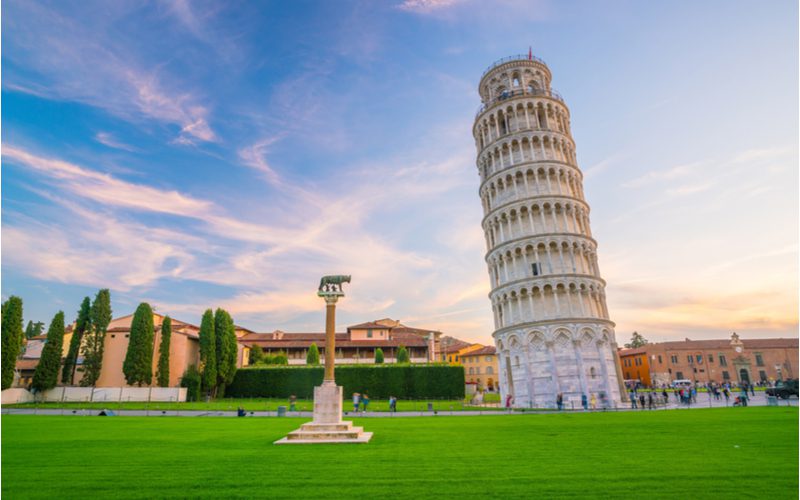 A massive tower standing at 184 feet despite centuries of sinking, millions of tourists have taken photos of themselves ‘holding’ the Leaning Tower of Pisa. One of many Tuscan towers slowly disappearing into the soft Italian soil, none are more dramatic askew than the famous Pisa tower.

Construction began in 1173, but the medieval desire for grand buildings outmatched their engineering skills. Without a good foundation, the tower quickly began to tilt.

For two centuries, construction started and stalled several times while architects tried to even out the structure. They were never able to get the tower straight, but construction ended in 1373 nevertheless.

Today, the tower is a favorite for tourists in the center of the old city of Pisa. More than five million people visit the tower every year, and the site makes an astounding 21 million euros annually.

From more of the most famous, to the prettiest and the grandest, what other buildings have captured the minds of humanity?

What are the Ten Most Famous Buildings in the World? 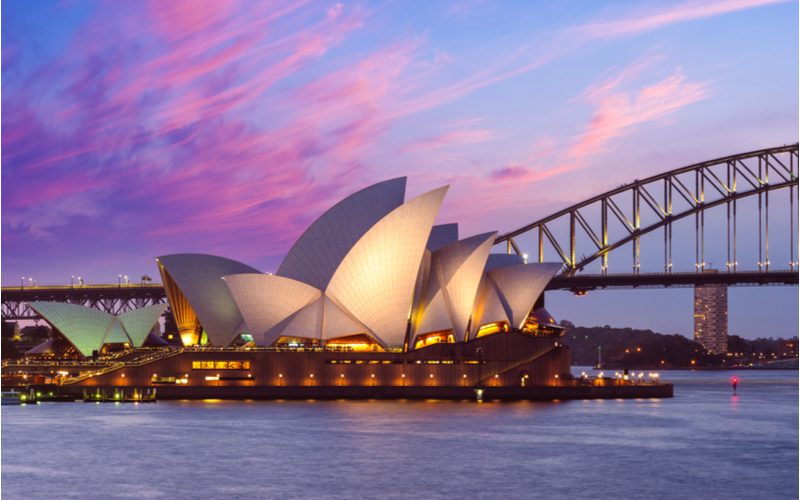 Besides the ones listed above, five more of the most famous and recognizable buildings in the world include:

What Is the Prettiest Building in the World?

“Prettiest” is a somewhat relative term, but there are certain buildings that people consider more beautiful than others.

Several palaces hold the consideration of the most beautiful structures in the world and for a good reason. For instance, the Palace of Versailles in France is a stunning example of early modern architecture.

The French royalty built the palace so intricately and ornately that it came to symbolize greed during the French Revolution. Likewise, there is also the simple beauty of Buckingham Palace in London that has housed the British monarchs for centuries.

Many castles have also topped lists of prettiest buildings in the world. The Neuschwanstein Castle in Bavaria, Germany, was so gorgeous that it inspired Walt Disney to build Cinderella’s Castle in Disney World.

Edinburgh Castle in Scotland sits atop scenic Castle Rock and looks out upon the beauty of Scotland’s capital city. Religious buildings are also often built to be amazingly opulent to please God or the gods.

St. Basil’s Cathedral in Moscow’s Red Square, with its onion-shaped spires, is one of the most recognizable cultural symbols of the city. The 12th century Angkor Wat structure in Cambodia is one of the largest temples in the world and incorporates the beauty of nature into its architecture.

What Is the Greatest Structure Ever Built? 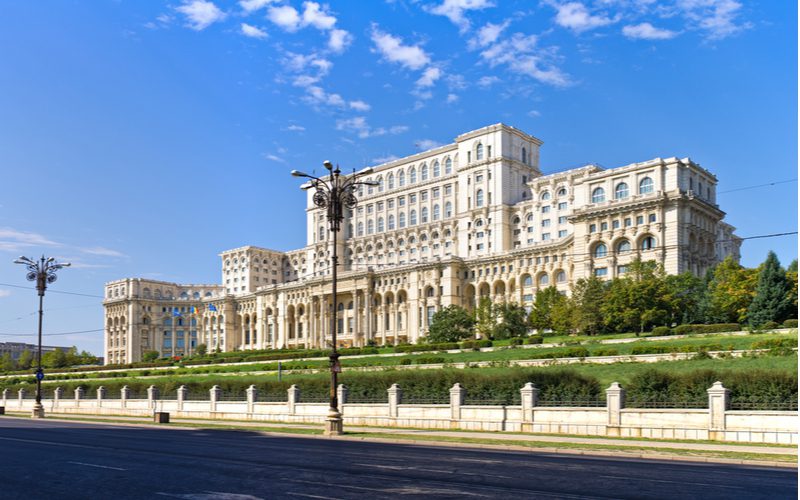 Just like trying to determine the prettiest structure in the world, there isn’t one building that can that undoubtedly holds the title. If you think that height makes a building great, then the Burj Khalifa is the most remarkable building, standing at an astounding 2,722 feet.

But, you shouldn’t discount towers that come close to the Burj’s height, like China’s Shanghai Tower and Goldin Finance 117, the Makkah Royal Clock Tower in Mecca, or the Lotte World Tower in South Korea.

If you’re looking for square footage, then the largest buildings in the world in order are:

If you’re more impressed by ancient structures that have stood the test of time, then Giza’s Great Pyramid takes the cake. Egyptians built the pyramid in the 2600s BC with a volume of an astounding 92 million cubic feet.

Other significant ancient buildings include the Colosseum in Rome, the Parthenon in Athens, and the Candi Borobudur Temple in Indonesia.

What Countries Have the Best Architecture?

Although there are beautiful and sophisticated buildings worldwide, the countries that people usually consider to have the best architecture are Germany, Italy, and China.

From the beauty of the Cologne Cathedral to the Neuschwanstein Castle, Germany is one of the most significant architectural hubs in the world.

But, German architecture goes farther than old buildings. The Reichstag Building, renovated in the 1960s and 1990s, is a dome-shaped glass building that houses the lower house of Germany’s parliament. The Berliner Fernsehturm is also one of the most inventive TV towers ever made.

Italy’s skills go back to ancient times with structures like the Colosseum in Rome and the Castel Sant’Angelo. Italy is also full of gorgeous cathedrals, like the Duomo di Milano in Milan, Saint Mark’s Basilica in Venice, and the Cattedrale di Pisa in Pisa.

While German and Italian engineering rules the west, China remains the architectural center of the east. The Temple of Heaven, which opened in 1420, and the Summer Palace, which finished in 1750, are amazing feats showing the classic Chinese style.

More recently, China has built some of the largest skyscrapers in the world, such as the Shanghai World Financial Center at 1,622 feet high and the Shanghai Tower, which tops off at 2,073 feet.

What’s the Most Famous Building of All? 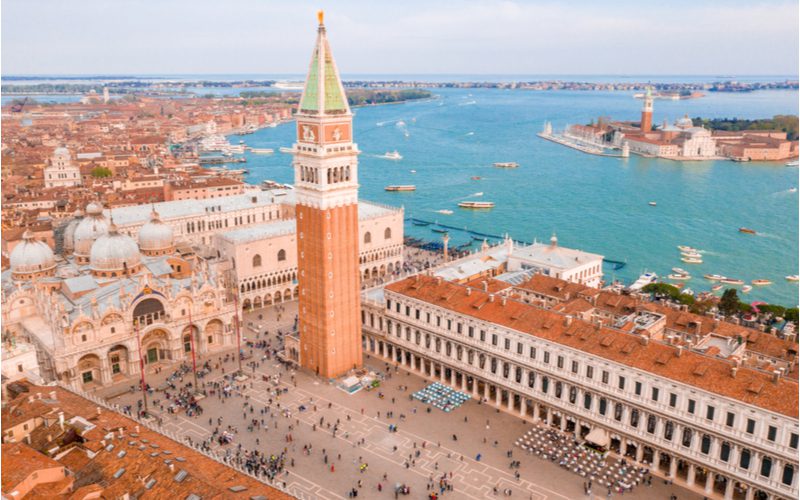 The answer is there is no building that’s the most famous, the greatest, or the prettiest. Instead, beauty and grandeur are in the eye of the beholder. We’ve listed 5 of the world’s most famous buildings that we think any real estate enthusiast will love.