What are the official cornhole boards dimensions? Whether you build or buy a set of cornhole boards, you want to make sure you have the correct size. But don’t worry — we’ll cover each of these in detail below.

Building a Set of Cornhole Boards 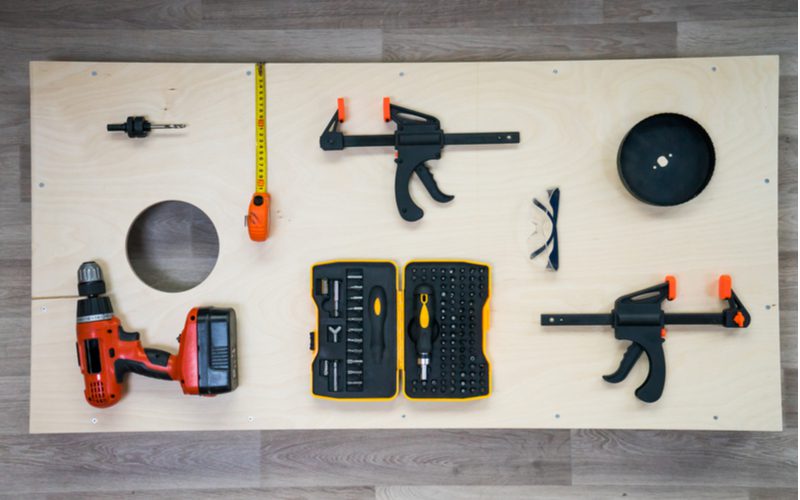 Making a set of cornhole boards for yourself can be a fun DIY project that will bring you enjoyment for years to come. Knowing the finished dimensions for cornhole boards is just the first step.

These are the supplies you will need to build your boards:

Tools that will make the job easier are:

You can make a few substitutions to these supplies lists. You can draw and cut the holes with a compass and jigsaw if you don’t have a 6” hole saw. Skip cutting holes at all by purchasing precut cornhole board tops.

Put on the finishing touches with semi-gloss exterior paint or stain. Here is a simple tutorial for building a set of cornhole boards.

Buying a Set of Cornhole Boards 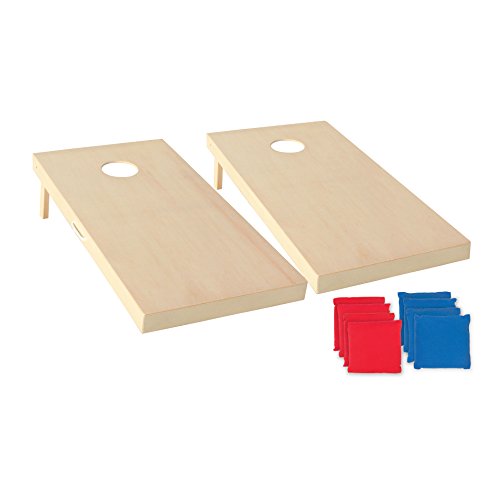 Triumph Sports Wood Premium Cornhole Set Check Latest Price
We may earn a commission when you click this link, at no extra cost to you.

Cornhole has been gaining popularity in the last several years. You see people playing at backyard barbecues and in local bar leagues. Most retailers have risen to meet the demand for quality cornhole boards.

You can pick up a set from Amazon, Home Depot, Target, and other retailers. You can spend anywhere from $50 to $300 for a set of cornhole boards.

It depends on what you want. You can spend less on a plain and simple set for backyard play. Some boards are elaborately decorated or have your favorite professional sports logo.

Setting Up a Cornhole Court 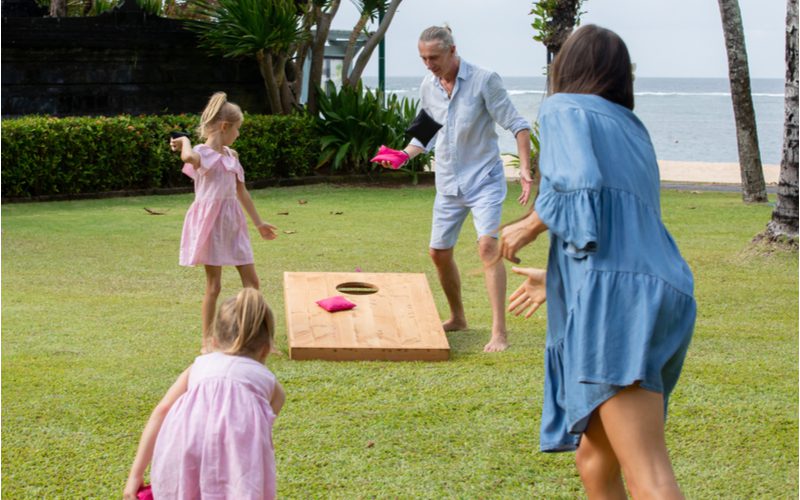 There is more to setting up a game of cornhole than just having standard-size boards. You’ll need a space large enough for the court and bags that are the correct size.

The total space you will need is 40-45′ long by 8-10′ wide. The Cornhole court consists of four sections:

The dimensions of the boards are 47.4-48” long by 23.5-24” wide. Most boards are 3-4 inches thick with legs that fold up in the back for storage. The front rests directly on the ground during play, and the legs prop up the back to the standard 12”.

You must sand the surface of the boards smooth or paint them with semi-gloss exterior latex paint. The bags should be able to slide up when they land on the lower part. You can make your boards too slick, though.

The board must have some grip so that the bags don’t slide back down once they land on the surface. The hole must have a 6” diameter. The center should be 9” from the top of the board and 12” from each side.

Each player stands in a pitcher’s box. The box is a 3′ by 4′ space on each side of the board. The boxes aren’t usually marked. Since the board is about four feet long, most players use it as a guideline to stay within the pitcher’s box. Stepping outside the box results in a foul.

A player’s lane refers to his side of the board. Players in singles and doubles matches will remain in the same lane for the entire game.

The foul line is the distance between the front of each board. For adult open play, the foul line is 27′ long. For juniors, which are 12-years-old and under, it is 12-15′ long.

Bags that land in the space between the boards don’t score points and you can’t pitch them again until the next inning.

Putting together your Cornhole game isn’t complete without the right beanbags. The official dimension for the bags is 6” square.

You fill them with two cups of feed corn for a total weight of 14-16 oz. Artificial pellets are also acceptable in competition play. Are you making your bags? Cut the fabric 6.25” for seam allowance. You should use a heavy, durable material. 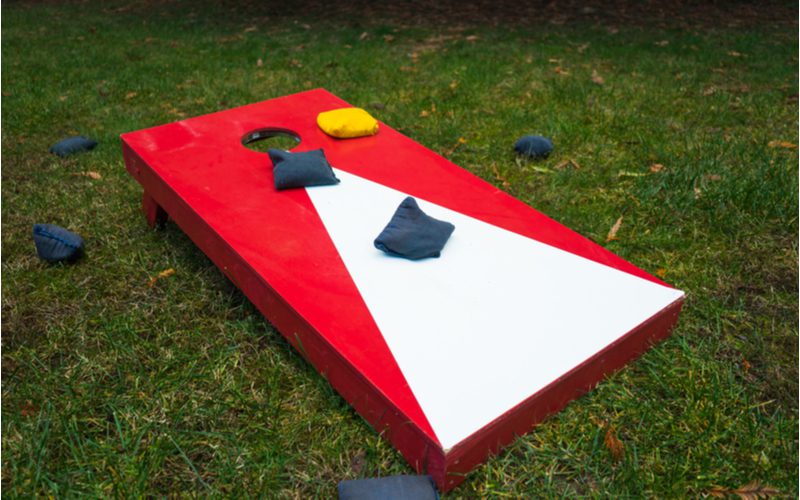 Now that you have your cornhole court set up with the right boards, lines, pitchers’ boxes, and bags, you can begin play. Play cornhole matches either singles (1 vs. 1) or doubles (2 vs. 2). The American Cornhole Association lays out the official rules of play.

The team with three bags-in-the-court earns one point for the inning. The team that scored pitches first to begin the next inning. If neither team scores points in an inning, the team that led the previous inning will begin again.

A player can commit a foul in tossing or scoring: 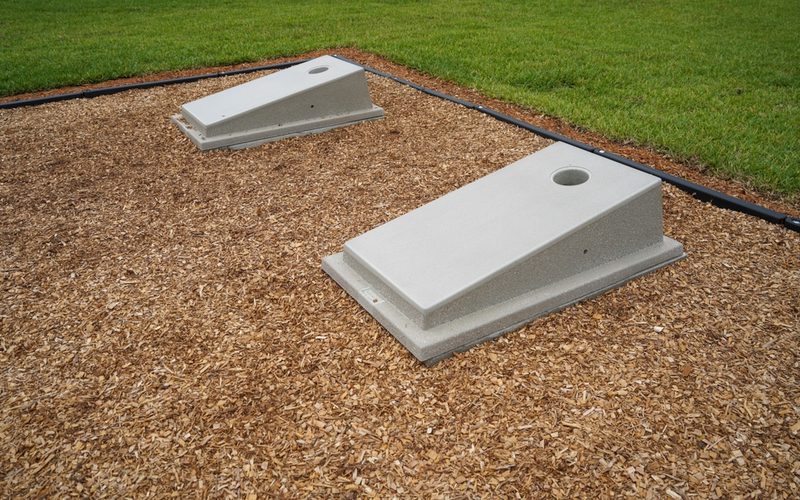 What do you do if you lack the space needed for a full-size cornhole court? You can still have tons of fun with smaller versions of and variations on the game.

A full-size cornhole court has a 27′ foul line. You can decrease the distance between the boards for junior (kids 12 and under) or if you don’t have the space for a 40-45′ court. Make the foul-line 15′ long.

Varying the playing field will still give you a challenging game for the adults, make it fun for the kids, and take up less space than a full-size court.

Cornhole is typically an outdoor game. You’ll find the neighbors tossing bean bags during a summer barbecue. What happens when the temperature drops? Bring this iconic game indoors with a mini or tabletop version.

The first version is two boards that are miniature versions of the original game. Players set up the boards at the ends of the table and stand behind the boards to toss their bags. The second kind is one finished piece with the boards connected to a center plank.

The American Cornhole Association sells a unique tabletop version of the game that includes a spring-loaded launcher for the bags. This game is even smaller with a 4” by 8” board. Available in several designs, it is sure to be a party favorite.

What is the original size of cornhole boards?

How far apart are cornhole board holes?

The ideal distance is about 23 feet apart. If you want to make it more challenging you could set it 27 feet apart or even 30. Remember to always set the board on a flat surface.

Why is it called cornhole?

While it would be easier to call it toss up or bag game, the name is literal due to the fact that the objective of the game is to throw a corn kernel filled bag into a hole.

What equipment do you need to play cornhole?

You only need a corn kernel filled bag and the cornhole board.

Should I Build or Buy My Cornhole Boards?

If you love DIY projects, building cornhole boards are easy to tackle on a weekend. You can purchase materials for about the same amount of money as a quality set of boards. Building your own would be more about your enjoyment of the project rather than saving money. Buying a high-quality set of cornhole boards from big-box retailers or the American Cornhole Association is an excellent choice too. They have a ton of styles featuring sports teams and other motifs.

So, What Are Cornhole Board Dimensions?

The full-size version of the game consists of two boards that are about 48” by 24”. They need to stand at a tilt where the front rests on the ground, and the back is 12” up.

More Than the Boards

You need a 45′ by 10′ space for an official cornhole court. Players stand in a 3′ by 4′ pitcher’s box at the side of the board. Usually, the boxes aren’t marked. You can use the board as a guideline. Place the boards so that the fronts are 27′ apart.

Place them 12-15′ apart for junior players or if you don’t have enough space for an official-length court. Enjoy tabletop variations of cornhole when you are indoors. You can build or buy full-size or tabletop cornhole boards.