We all know that a residential house is much more just than four walls and a roof. Traditionally, family houses come in five types of split level-homes. We’ll explain each one in detail in our complete guide below.

The 5 Types of Split Level Homes

You may have seen a few terms used to describe split-level houses if you’ve been reading online or checking out real estate. The most common include:

People sometimes also use the term raised-ranch to describe split-level houses. It was once quite specific and only referred to a home with one flight of stairs on the ground floor.

But, the meaning has become almost a generic term for split-levels. It’s now much more descriptive and accurate to use the five main names to describe the architecture of a split-level house.

The Most Common Types of Split Level Homes

Not every home’s construction is the same. If you think about what you see in a trip through a neighborhood looking at the exterior of houses, there are two-story homes with a bottom level and an upper level. These are sometimes called bi-level houses.

These wouldn’t be considered split-level homes because they have one level stacked right on top of the other. Other homes also feature multiple levels, but one extra section is offset from the stack and attached adjacently.

We call these houses split-level construction or split-level designs. There is often a section of the house that’s two stories, with one distinct space on top of the other and another single-story area for other activities.

One principle feature common to split-level homes is multiple short staircases rather than one long staircase. The extra level in the middle of the stairs is the split. This construction style comes in five distinct flavors. 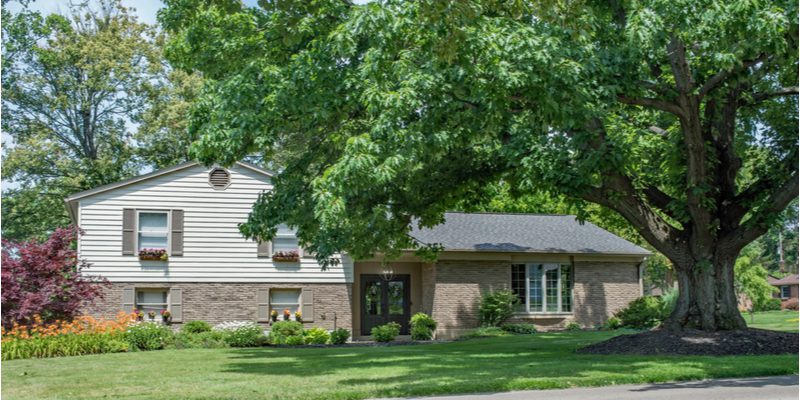 The simplest style of split-level design is the standard split. People also call this same design traditional split-levels, so the terms are interchangeable.

By whichever name, these homes have an entryway and foyer that sit completely on the ground level. It might be easiest to think of this as the middle level if you’re having trouble picturing how it looks.

After entering the doorway, you access a foyer without going up or down the stairs. As you go further into the home, a short flight of stairs up and another down can usually be seen, each heading to other floors away from the foyer.

The main floor with the entry typically has an adjacent living area. The downstairs floor is often a home office, pantry, guest bedroom, garage, or a combination of rooms. It can often be partially or even wholly set into the ground.

The upstairs level is typically the location for the home’s bedrooms. A typical design might treat the lowest level as a home gym, office, or game room. The middle ground level is the kitchen, foyer, and living or recreation room. 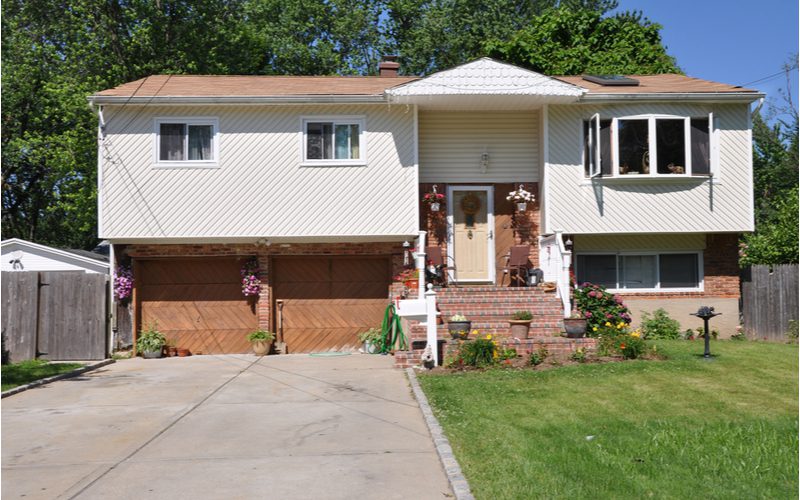 For this design, the entryway and its attached floor space offer a buffer between an upstairs and downstairs space. In this arrangement, the entry floor is still the middle floor.

There is typically a short foyer with stairs leading up and another leading down just inside the doorway. Off to the side, there is an entry parlor or sometimes a large mudroom, but not an expansive living space.

With split-entry models, there is much greater variety in the overall layout compared to a traditional design. For instance, some homes may have a lower level with all the bedrooms and an upper floor with the kitchen, recreation space, and a sitting room with a large bay window.

Or, you can reverse the design and put the bedrooms upstairs and the living area downstairs. This flexibility is advantageous if the home is built on uneven ground or the topography of the lot affects the amount of visible light entering the home.

You can match the arrangement of your rooms to your preferences for privacy, as well. For example, a family with young children might prefer the kid’s bedrooms to be upstairs with the adults sleeping on the ground floor for safety. 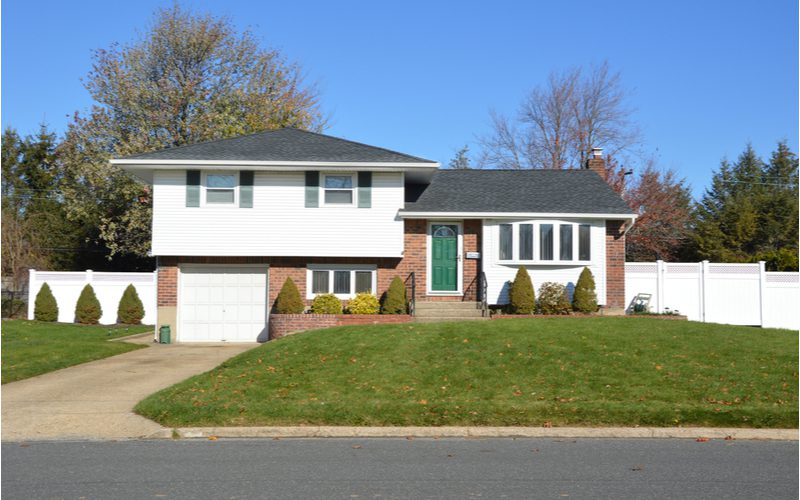 Split-foyer homes sound similar to split-entry models. But they’re quite different. Instead of an entry room and foyer, the staircase’s landing serves as the entire middle level.

That landing probably has a shoe rack, a shelf for your wallet and keys, and a few hooks for jackets. It might have a small closet or a bench to sit on when you take your boots off. That’s about it. Then, the stairs can take you either up or down.

In one typical setup, there is a garage on one side of the lower level with bedrooms sitting above it upstairs. The other side of the house often has an upstairs section featuring an A-shaped or peaked roof, with living areas both upstairs and down.

So, for example, the bottom level that is to the left of the stairs may contain a garage converted into a home gym, and to the right of that, there may be a guest bathroom, bedroom, and utility room.

On the upper level, there may be a family room on top of the living space that is to the right and a set of bedrooms and a bath to the left above the gym. 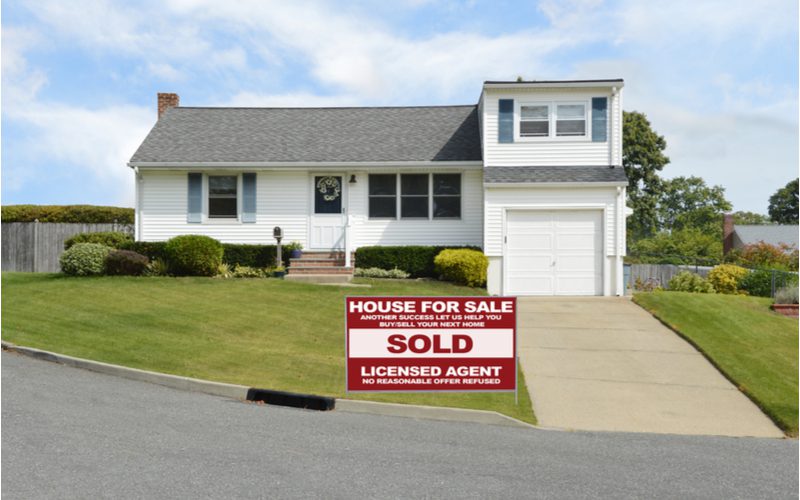 Side-split houses are probably the most common and familiar type of split-level house you will encounter. This design features an entryway on the ground level, just like many other splits.

After entering the home, you’re in a foyer, but the staircase isn’t in front of you. It’s off to one side or the other instead. With a side-split design, the foyer and staircase cut off one side of the living space from the other. So, the house seems like it has been chopped in half by a cleaver.

That separation often provides the buffer between the living space on the entry floor, the upstairs set of bedrooms, and the basement or garage downstairs. It’s a split-level, but with an offset to the side. 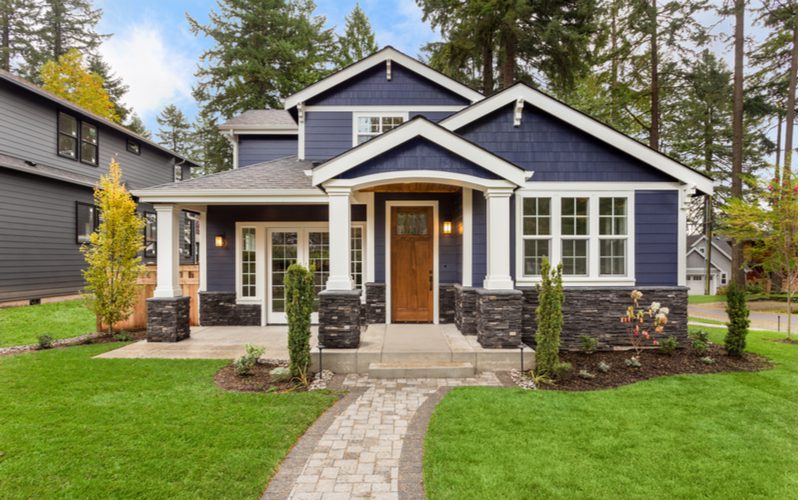 There is also a type of split-level home called a back-split. It’s similar to a side-split model, but instead of the bulk of the house cut in half from side-to-side, the location of the staircase cuts the front of the house off from the back.

From the outside, these two designs seem quite similar. And, the effect inside the home often is, too. One possible design features a recessed entryway, with a large foyer and rooms to one side and back of the house.

Then, with a turn to the other side, you access a staircase that goes up toward a set of bedrooms in the back or down to a front lower room with a large window. The bottom level can also be a garage or home office space.

Many split-level homes were built during the 1970s when that style of construction was exceptionally common. It remained quite popular for a period due to its tendency toward open-space designs and much bigger footprints than houses of the post-war period.

Then, the 1990s were a decade where arched windows, island cooktops, and expansive home kitchens became more popular. In the next two decades, designs moved even farther away from the traditional split-level.

The builders of the 1970s couldn’t have imagined the modern emphasis on pre-wired sound, cable, and IT networks, natural light, eco-friendly hardscaping, and outdoor recreation. Why is that important?

The vast differences inherent between recent construction and houses built in the split-level boom era explain much of real estate pricing.

Purchasing trends strongly skewed away from split-levels in the recent past, and the prices were quite affordable. But now, rising inflation combined with the already high cost of modern homes has made split-level houses very popular again. 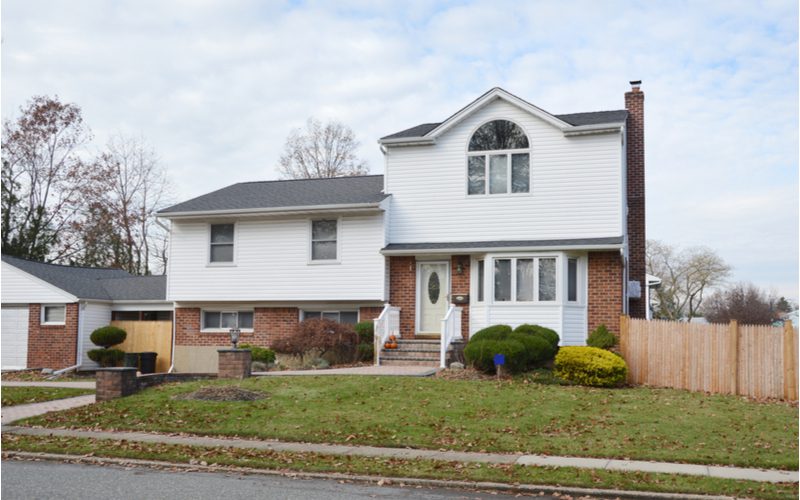 Split-level designs offer the homeowner a few unique features and some things to consider:

Some questions about split levels are very common.

Are There Other Types of Split-Level Houses?

Yes. They’re all variations on the same theme. The two less common types you might hear about are back-splits, which strongly resemble side-splits, and stacked-splits, which are split-levels with more levels.

What Makes a House a Split-Level?

When a house has staggered floors, it’s a split-level. Sometimes, another name might be used to describe it more accurately and precisely, but in essence, that’s the definition of a split-level.

Why Are Split-Level Homes Cheaper?

Split-level homes can sometimes be cheaper because their design is a bit outdated, especially by modern standards with an increased emphasis on creature comforts and eco-friendly designs. However, with changing real estate trends, split-level homes are enjoying a bit of a renaissance.

What is the Difference Between Split-Level and Split-Foyer?

A split-foyer is a type of split-level house. The foyer is fairly large, more than just a short landing for the staircase. Adjacent to the entryway, offset from the two short staircases, is a small entry room. Sometimes, this space is used for a greeting area, mudroom, or parlor.

How Do You Style a Split-Level House?

Split-level homes are often built on uneven ground because their up or down design accommodates setting one side of the house at a different height than the other.

Accordingly, using hardscaping and landscaping to accentuate the offset design boosts the aesthetics of the home’s outward appearance. Inside, consider that one main advantage of split-level homes is that they offer a lot of separation between distinct areas of the house.

A noisy downstairs game room pairs nicely with a quieter upstairs living area, and the staircase in between helps differentiate the two.

So, What Are the Types of Split Level Homes?

Split-level homes come in different shapes and sizes. They are distinct from bi-level houses, and their common feature of multiple, often short, staircases leading to different levels is a familiar design.

The most common types of split-level homes are traditional, split-entry, split-foyer, side-split, and back-split. We love them all, and think you will too!