Are you looking for a clock but aren’t sure what to buy? Here’s a closer look at the different types of clocks, as well as their various pros and cons. Be sure to read until the end — we’re sure you’ll learn something.

Different Types of Clocks: A Summary

While all clocks tell time, they don’t all have the same shape, power needs, and features. Broadly speaking, there are four main types of clocks:

Categories aren’t mutually exclusive. For instance, a clock with hands that needs a battery is a battery-powered analog clock.

The Different Types of Clocks in Detail

From classic to modern and everything in-between, here’s a closer look at the different types of clocks available. We’ve rounded up the most popular clock types below: 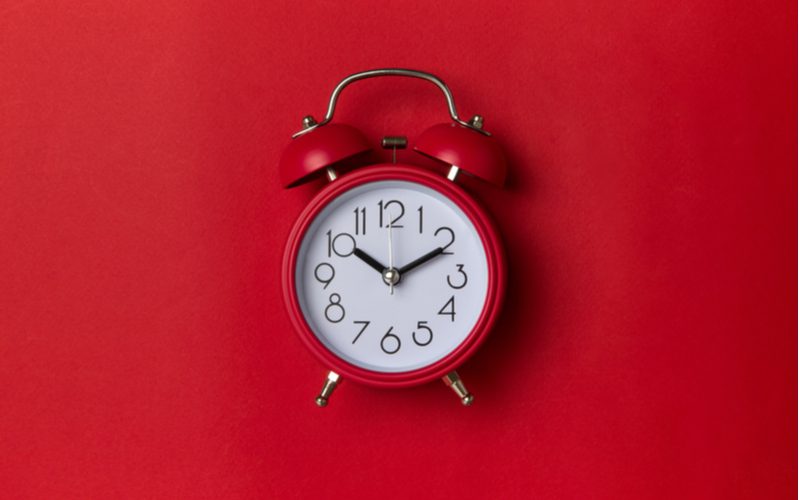 An analog clock is a classic that can’t be beaten. Analogs are the type of clocks with hands. The short hand indicates the hours and the longer one signifies the minutes. Some analog clocks even have a second hand that speeds along non-stop.

You’ll find analog clocks just about everywhere, from homes to businesses and more. Simple, round analogs are in offices and schools around the world.

They range in style from simple to incredibly complex. You can find analogs with Arabic numerals, Roman numerals, or even no numbers at all. When selecting an analog clock, you want to consider its style, total size, number size, weight, and power needs. 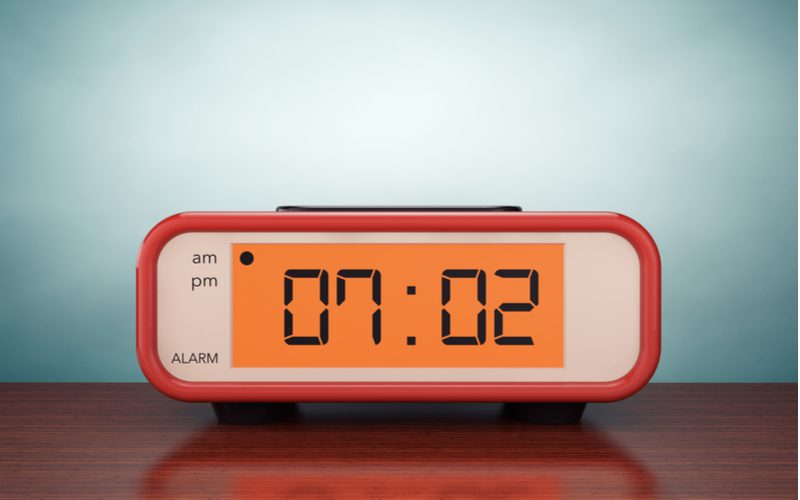 A digital clock is another popular type. They have a digital display for the numbers. Instead of hands, the time is displayed via numbers on a screen, such as an LCD or LED.

While certain types of digital clocks have existed since the 1800s, the modern digital clock was patented in the US in 1956 by D.E. Protzmann. During the same year, the digital watch was also patented. 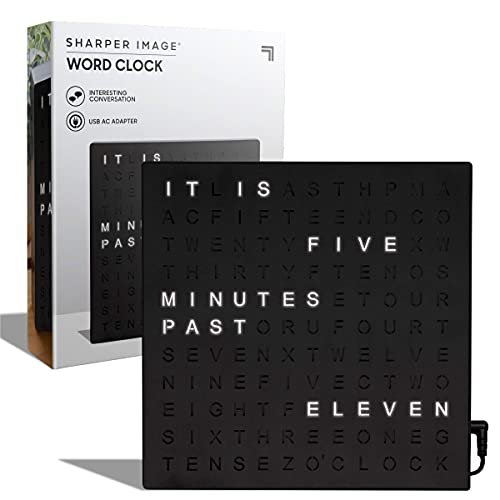 Sharper Image Light Up Electronic Word Clock Check Price
We may earn a commission when you click this link, at no extra cost to you.

An electric word clock has a digital display, but it doesn’t show numbers. Instead, the face displays the time in a written format. For instance, it could say “six o’clock” or “six fifteen pm.”

Word clocks are often used by folks with poor eyesight. The written words are often easier to see than numbers. Sometimes, numbers such as eights and threes can blur together, making it difficult to tell time, especially from a distance.

The main potential drawback is that some of these clocks can take up a lot of space. As you’d expect, a clock that displays words such as “four thirty-five pm” requires a fairly long front display screen. 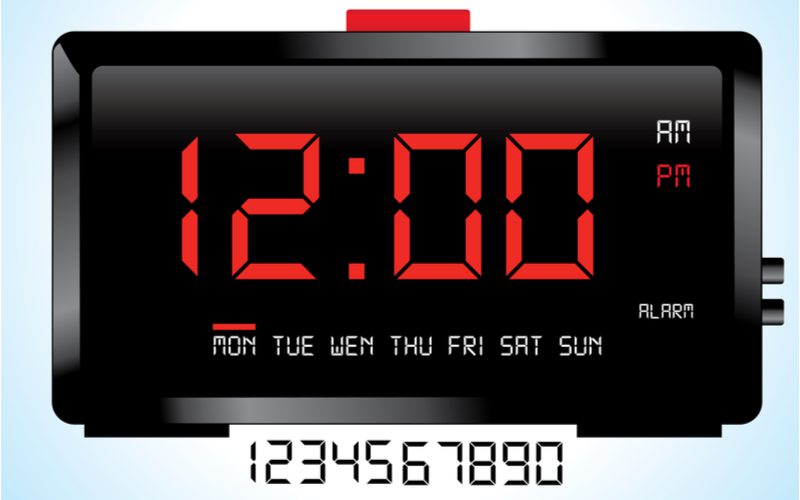 A multi-display clock shows the time and more. Other types of information typically displayed include:

More intricate models will display multiple time zones, including maritime (a time used at sea). Some types of multi-display clocks show all the information on the screen at once.

And others have a button that you push to cycle through different displays. The cycle type is useful if you want to minimize info you only need occasionally, such as other time zones. 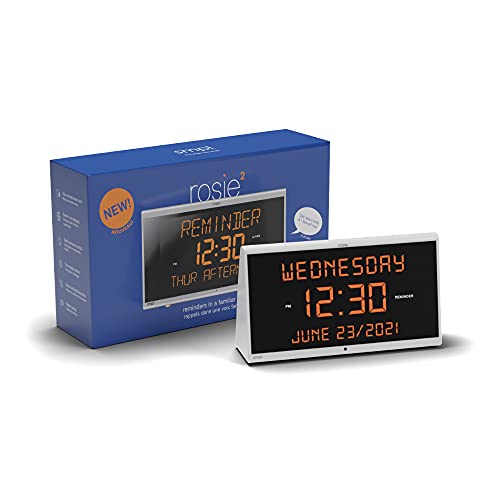 Reminder Rosie Talking Clock, Minimalistic Style Check Price
We may earn a commission when you click this link, at no extra cost to you.

Instead of displaying time visually, some clocks tell the time using sound. They can speak the time in a voice, either a recording of a human voice or a computer-generated one. They can also make noises such as ringing or chiming.

Some auditory clocks only make noise when you press a button. Other types make noise automatically, such as church bells and grandfather clocks.

Auditory clocks are great in two main situations. They’re helpful (and sometimes necessary) for people with impaired vision. Auditory clocks are also a good choice in large, public places where people can’t necessarily see a clock easily, such as a train station. 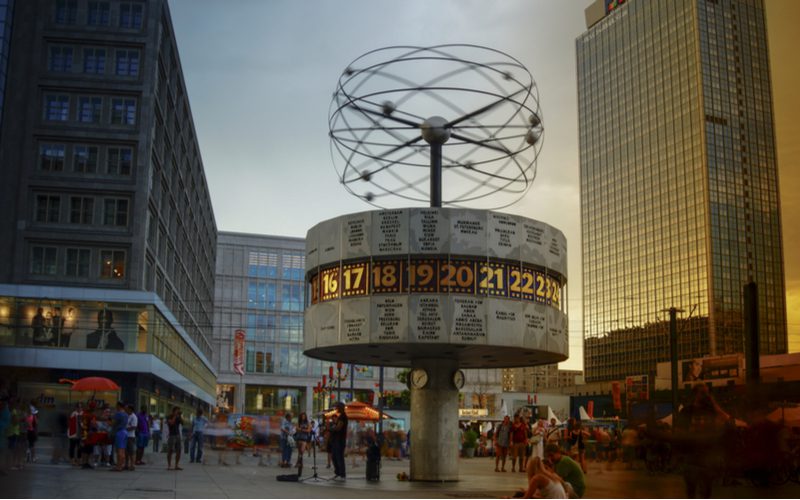 An atomic clock is the most accurate type of clock in the world. They use a quartz crystal oscillator to tell time by detecting electromagnetic radiation. They’re only off by one second every 10 million years.

Atomic clocks are used by NASA in GPS satellites that orbit the planet and explore deep space. But they also have uses closer to home. They’re found in smartphones and electric power grids. 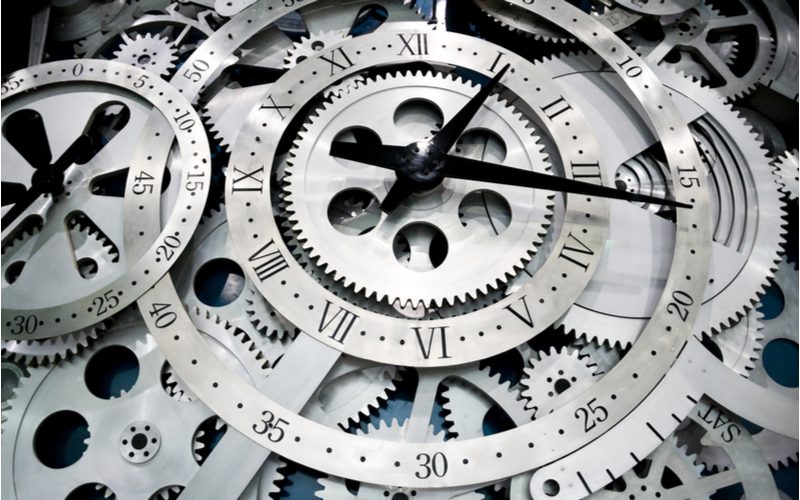 Mechanical clocks are incredibly common. They use a tightly-wound spring to gauge the passing of time. The spring stores energy which it then releases steadily to transfer power to various gears, which then move the hands or turn numbered dials. 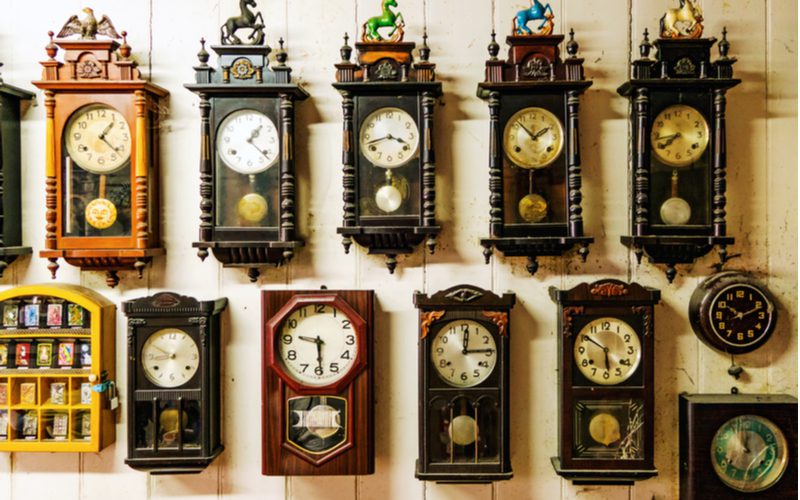 The pendulum clock is one of the oldest types. Introduced in the 1600s, these ingeniously-designed clocks use physics principles to keep time, requiring no electricity. Pendulum clocks use wide pointers powered by gravity to track the passage of time.

While the original platinum clocks were usually quite large, today you can find them in many sizes, including compact options.

Keep in mind pendulum clocks do require special care. They need regular winding. Also, excessive temperatures can affect their housing, which can decrease their accuracy. 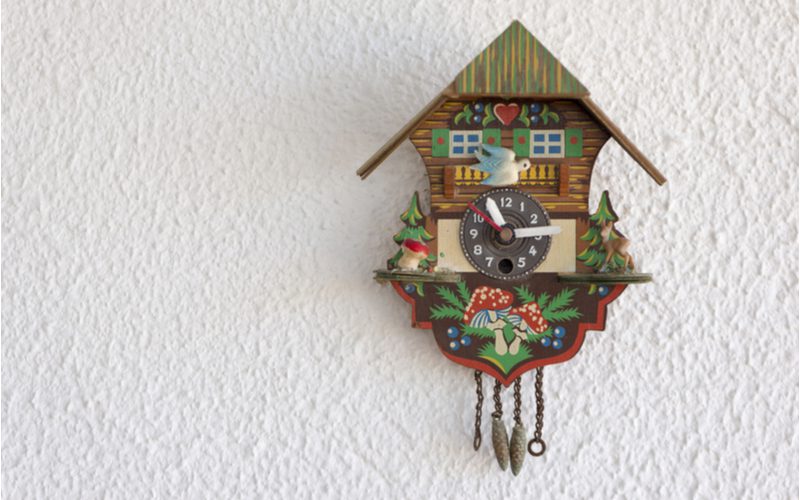 Is any clock more fun than a cuckoo clock? In the traditional type, a little wooden bird emerges from a hidden door to give out a cuckoo call. The number of calls indicates the hour. Cuckoo clocks date back to the early 1600s.

They originated in the Black Forest region of Germany, an area home to cuckoo clock artisans even today. While the original type of clock features a cuckoo bird, you’ll find no shortage of variations, including licensed characters.

When selecting a clock for your home, office, or another location, consider the following:

Fortunately, because so many clock options exist, you can almost certainly find whatever combination of features you want. 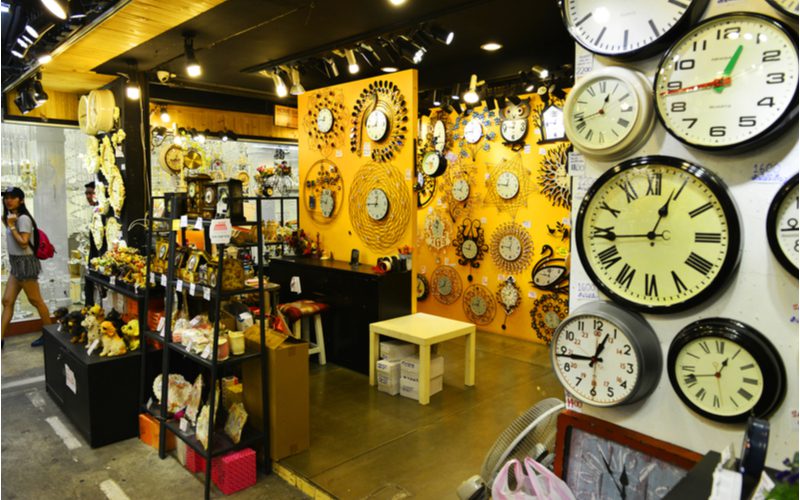 Here are some quick answers to the most popular queries about the different types of clocks:

What are the Two Main Clock Types?

While you’ll find a variety of clocks, the biggest distinction is whether they’re analog or digital. Analog clocks have hands while digital clocks display numbers on a screen.

Both types of clocks can be powered by either battery, electricity, or internal mechanics (although mechanical digital clocks are rare).

What Features Can Clocks Have?

Many clocks do more than tell time. They can also display the date, temperature, time in different time zones, and so on. Also, clocks can have alarms, play music, and read the time aloud.

What are Old Clocks Called?

What Type of Clocks are Easiest to See?

The larger the clock face, the easier it is to see, especially from far away. Many people find that clocks with hands are easy to read as even someone with poor vision can determine the approximate time based on the position of the hands.

Other types of clocks that are easy to see include clocks that project the time on a wall and ones that write out the time in letters (such as “four-thirty pm”).

Should I Hang My Clock on the Wall?

Wall clocks take up less space than the type that requires a desk or table. If you want a large clock, but don’t want to sacrifice any of your workspaces, a wall clock is a good option.

However, they do require more work to hang. You’ll need to put a nail or hook into the wall, which might not be an option where you live. Also, the fastener must be strong enough to hold the clock securely.

So, What are the Different Clock Types? 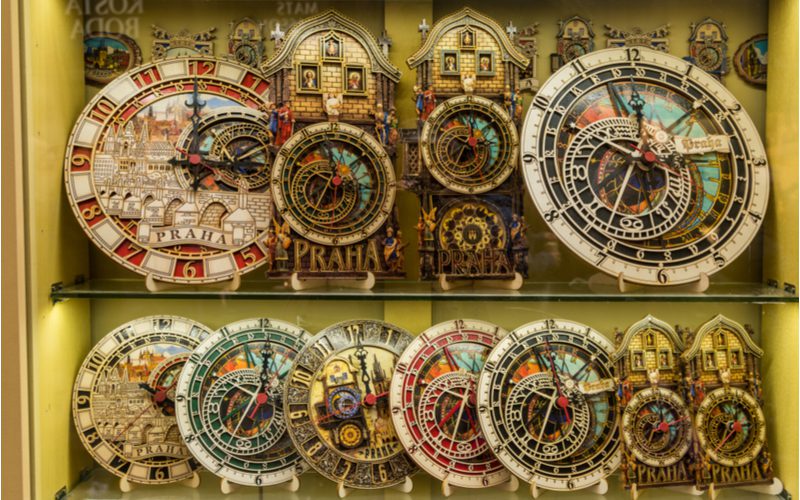 Both desktop and wall-mounted clocks display the time with either numbers or hands. Internally, clocks have several different operating mechanisms including atomic, electric, mechanical, and quartz. When you understand the different clock types, you can find the perfect option every time!