Porch light colors have a very specific cause they’re supporting. Whether the porch light is red, blue, green, purple, or flashing, it means something. Read on to learn the significance of each color and more in the guide below.

Porch Light Meaning: The Message Behind Each Color 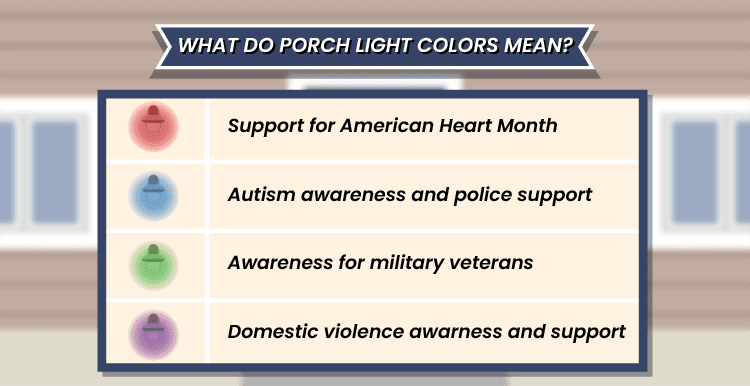 Have you ever driven past a house with a brightly colored porch light? Most likely, the colors were more than a design decision. Instead, the homeowner wanted to signify support or awareness for a specific issue.

Let’s take a closer look at different porch lights colors and what each one means. The most common porch lights you’ll see are the following four:

In most cases, the lights are only popular at specific times of the year.

Let’s take a deeper dive into when they’re used and how they originated. Each colored light campaign has a fascinating history worth exploring. 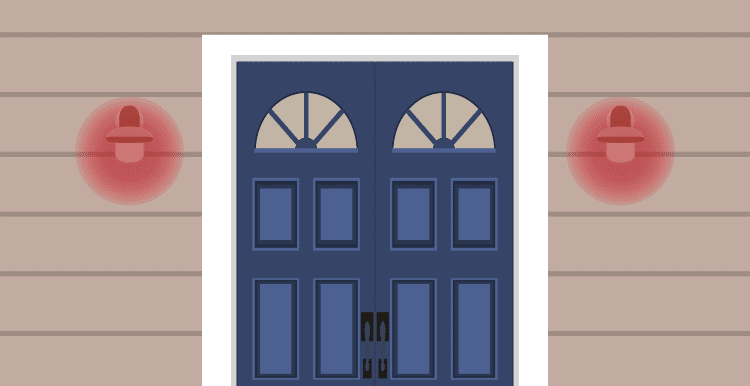 If you see a red porch light, it’s most likely meant to show support for heart health.

February is American Heart Month, created to increase awareness of cardiovascular health. During February, the American Heart Association encourages everyone to wear or display red, such as by wearing red clothing or putting a red bulb in your porch light.

Aside from heart health awareness, a red porch light has a few other potential meanings:

Another use of red lights is found in so-called Red Light Districts. These are neighborhoods known for prostitution, adult theaters, and the seedier side of life.

Back in the 1890s, brothels throughout the US would place a red light in the window of their establishment as a secret code indicating what kind of business went on inside.

To be clear, this was a practice used over 100 years ago, and it’s long since stopped. If your neighbor has a red porch light, they’re almost certainly promoting heart health and not operating a house of ill repute. 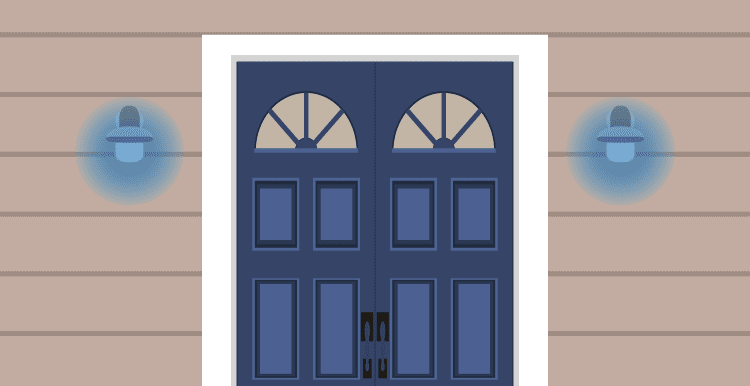 A blue porch light is most commonly used to show support for people with autism. In 2007, the UN Assembly officially declared April 2nd as World Autism Day.

Three years later, the autism advocacy group Autism Speaks attempted to increase awareness of World Autism Day by launching the Light It Up Blue campaign. The color blue is used around the world to represent autism.

The Light It Up Campaign encouraged people to put blue bulbs in any house lights visible to the public, such as porch lights. Although April 2nd is the official day, most people keep their blue lights shining during the entire month.

Although not as widely known as its use for autism awareness, a blue porch light also signifies support for police officers, sheriffs, and other members of law enforcement.

The program, called Project Blue Light, originated back in 1989 by the Concerns of Police Survivors (COPS). It had twin goals: to show support for law enforcement and to commemorate those who died in the line of duty.

Although the program started several decades before Light It Up Blue, autism awareness has emerged as the default meaning behind blue porch lights. However, if you see a blue porch light during the Christmas holidays, it’s likely meant to show police support. 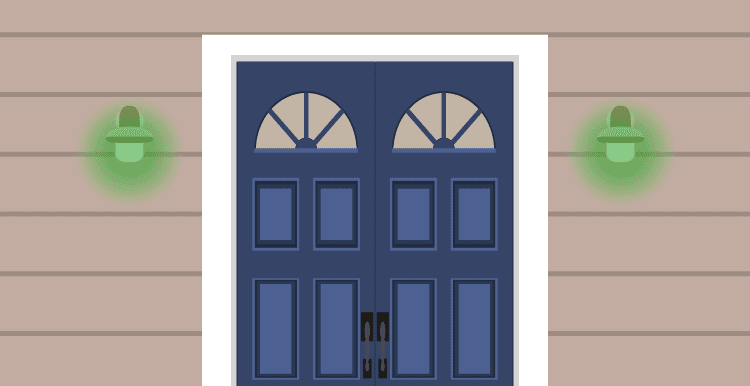 Green porch lights have a few different possible meanings, usually depending on the time of year. The most common use of green light is to show support for military veterans. It’s part of a program called Greenlight a Vet.

The program is meant to create awareness of the many challenges vets face when returning to civilian life. The use of green porch lights is usually at peak popularity around Veteran’s Day (November 11th).

However, the organizers of the campaign encourage everyone to keep at least one green light visible all year long. Green porch lights have a few other potential meanings, too. Head’s up – this gets a little confusing:

While there are multiple meanings, most green porch lights signify support for vets. 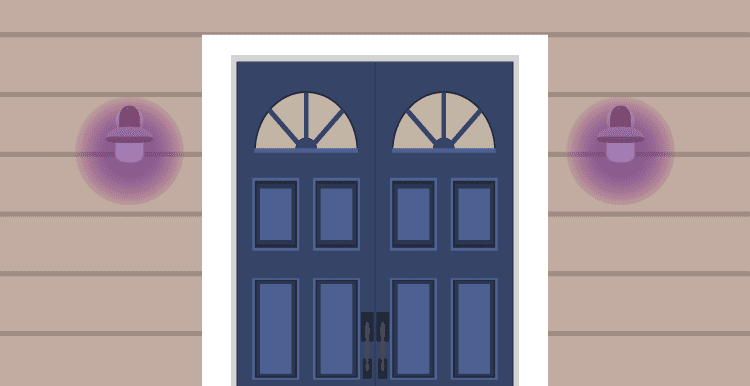 The awareness campaign dates back to 2007. The Domestic Violence Task Force, an advocacy group based in Washington state, created the Purple Light Nights, encouraging the use of purple porch lights to raise awareness of domestic violence, honor the survivors, and mourn the victims.

You’ll most commonly see purple lights during October, which is Domestic Violence Awareness Month. While you can buy purple bulbs, they don’t always create a purple color. Try using blacklights, which can create a deeper, more authentic purple. 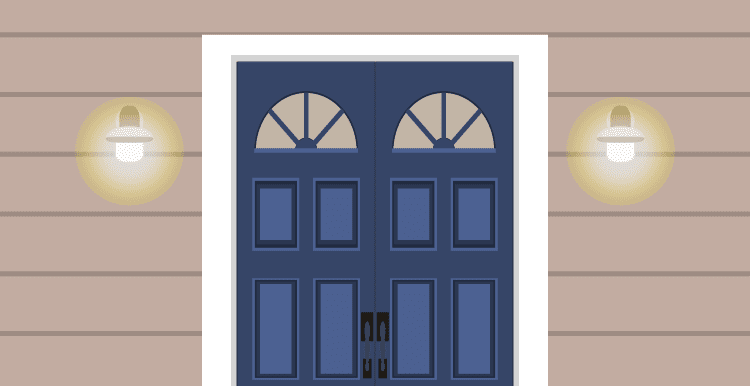 If you see a flashing porch light, someone inside might be signaling for help.

Many people will flick their porch light on and off rapidly after calling for emergency services. The blinking light is meant to draw the eye of approaching police, fire trucks, or ambulances. It’s especially useful at night when addresses are hard to spot.

What should you do if you see a blinking porch light? If you feel a neighbor might be in danger, try knocking on the door. At the very least, you can alert someone to a malfunctioning porch light.

Generally, changing a bulb in your porch light is no big deal, but keep these tips in mind:

As long as you follow these safety basics, you should have no problem changing the color of your porch bulb as often as you wish. 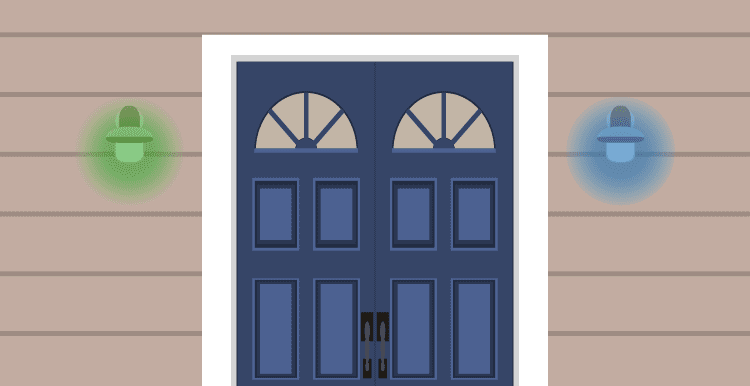 Here are quick answers to the most common questions about the meanings of porch light colors:

Each light has a different meaning, but they’re usually meant to raise awareness or show support for various causes. Keep in mind not every single colored porch light has a special meaning. Some people use a colored bulb to celebrate a specific holiday, while others might simply like the look.

What Does a Red Porch Light Mean?

Most commonly, red porch light is meant to raise awareness for heart health. They’re most common in February, which is American Heart Month. People also use red porch lights to decorate their homes for Halloween and Valentine’s Day.

Does a Red Porch Light Mean the Person Doesn’t Own Guns?

No. In 2016, an online rumor spread the idea that people who didn’t own guns were placing red bulbs in their porch lights as a way to show support for increased gun control.

However, the source of this story turned out to be a satirical website, and there’s no evidence people used red bulbs that way in real life.

Does a Red Porch Light Mean the Person Sells Drugs?

We’re not sure why red bulbs spawn so many strange and false ideas, but this is another one. The urban myth says that drug dealers use red bulbs (and sometimes bulbs of other colors) to signal the availability of drugs for sale.

Of course, if that were true, the police would certainly have an easier time catching criminals. The big takeaway here is you can show your support for any of the causes above without worrying about the police knocking down your door.

What Does an Orange Porch Light Mean?

Orange porch lights have a special meaning in Delphi, Indiana, and the surrounding communities. They’re used to bring awareness to the murders of Abigail Williams and Libby German, two victims of a local serial killer.

So, What Do Porch Light Colors Mean?

Your porch light can help you show your support for many different issues, including cardiovascular health, veteran and law enforcement appreciation, domestic violence prevention, and more.

When many people all change the colors of their porch bulbs, the community can feel a sense of solidarity and hopefulness. It’s a small act that can potentially lead to significant, positive change!