At one time in your life, you’ve probably seen a centipede scurrying away as you turn on a light. Don’t worry — they aren’t dangerous. This article covers all you need to know about this common house bug and its known habits.

What Is a House Centipede?

A house centipede, Scutigera coleoptrata, is a common arthropod that lives mainly in homes, and it isn’t aggressive or highly venomous to humans. Its diet consists of spiders, termites, roaches, and even bed bugs.

Their presence in your home can tell you a lot about the other critters hiding. They might even lead you to where gaps and cracks are letting in unwanted visitors and moisture.

These centipedes have long, fluffy, tapering legs that undulate as they move. Although they can be startling, these centipedes are generally harmless to humans and are a natural form of pest control for more harmful bugs that can cause damage to your home or your health.

House Centipedes are found all across North America and can live their whole lives within a singular structure. Their long legs and high speeds often alarm people, causing them to be crushed or sprayed.

They originated in the Mediterranean and showed up on almost every central continent over the centuries. Their newest whereabouts are still being discovered.

House centipedes aren’t aggressive and enjoy staying in quiet, damp places. If it wasn’t clear from the name, these centipedes make their homes in manufactured structures and feed off the other insects and arthropods that enjoy human comforts. 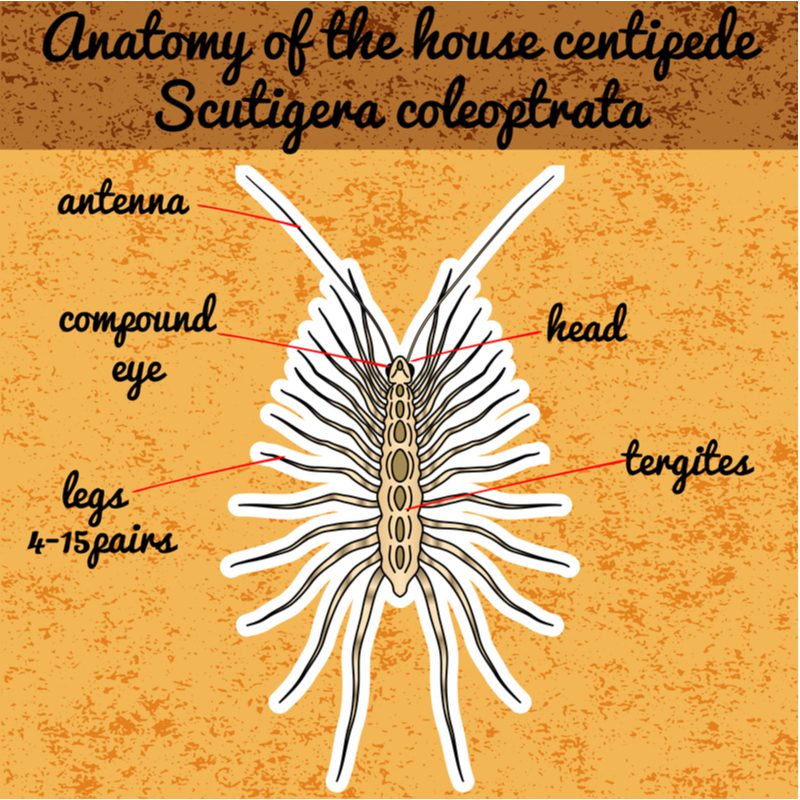 A full-grown house centipede’s size ranges from 25-35mm, or 1-1.5 inches (sometimes bigger). They have long antennas that make them appear longer than they are. The antennae guide them with more than sight or sound. They feel and react to tiny vibrations.

A brown, yellowish color, they have dark stripes down their bodies and pale legs. They’re creatures meant to blend into undergrowth and shadows.

The house centipede can move just over a foot per second on their 15 pairs of spindly legs. This mobility allows them to climb on walls and ceilings with ease. Some even notice these bugs grooming their long legs.

These many legs give them a hairy appearance, and it can be unsettling to see them moving about at great speed. It’s startling to see one on any surface, but just know they’re far more startled to see you.

These centipedes enjoy dark and damp places. If they’re out in the wild, they live under old logs, leaf piles, or in gardens. Often, a house centipede can live its entire lifecycle in the same building– provided it has proper food and shelter.

They can’t regulate their temperature or stay hydrated, so it’s essential that wherever they live has lots of humidity and a warmer temperature. They can’t survive cold winters outside, so they must find a warm and stable environment.

They primarily live in human structures like homes or other buildings, shying away from well-lit areas and going for places like basements, bathrooms, or kitchens where there is moisture. They go where it’ll be most comfortable for them, which gives them ideal conditions for reproduction and feeding. 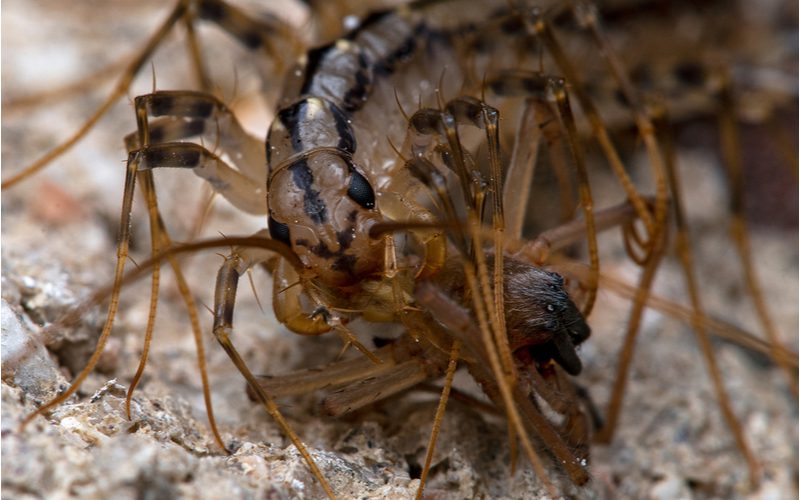 House centipedes are hunters. They hunt down bed bugs, roaches, spiders, silverfish, and termites. They’re purely insectivores, so while they eat and survive, they’re also clearing out more harmful pests from your home.

They have intelligent hunting methods, going after dangerous other pests. The centipede can and will make a meal out of them. Their venom is only toxic to other bugs and poses no fatal threat to humans or other animals.

For example, centipedes are venomous to wasps. A house centipede can sting a wasp and outrun it while the venom takes effect. Once the wasp is immobilized, they can feed without a threat.

Since their diets consist of only insects, arachnids, and other arthropods, it’s safe to say they aren’t going to go after you or have any desire to hurt a person.

They mature to reproduce by three years. They are both hunters and prey, so their lifespan can be cut short if they get caught in the wrong place at the wrong time. 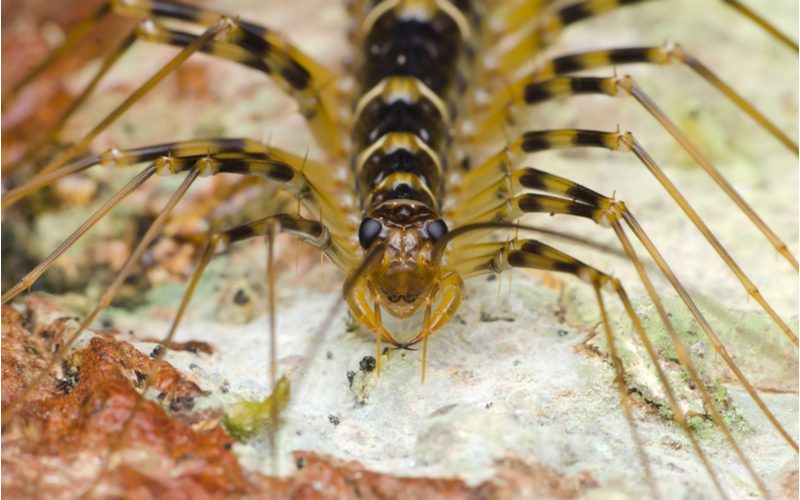 House centipedes are reclusive and shy away from light. This high sensitivity means you probably won’t see them out and about much during the day, and it’s also why they cause such a fright at night.

They actively flee light, sometimes stopping mid-flight and waiting and watching. They aren’t aggressive towards humans, choosing flight over fight. So don’t expect them to approach you.

The house centipede is a startling-looking creature, but it poses no real threat to you and your home. It benefits you by helping keep other pests under control. This tiny arthropod is common and likes to keep out of the way. Before killing one, consider this: 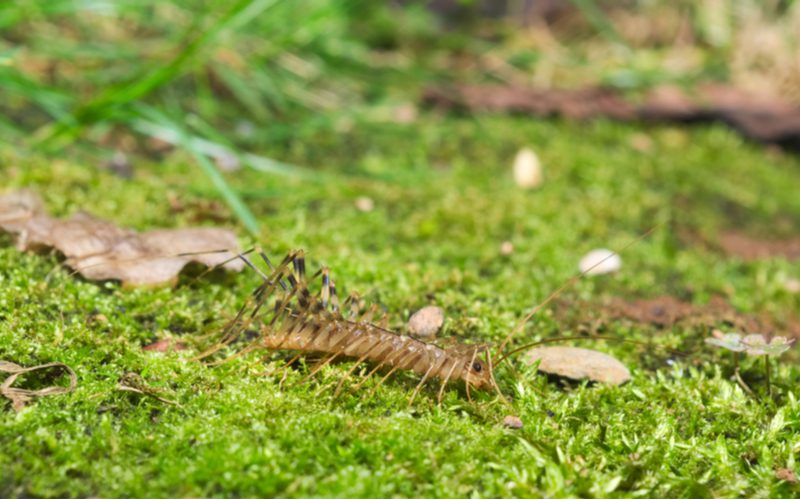 Here are some of the most asked questions about house centipedes:

If you do happen to catch and hold a centipede and anger it enough, it can give a sting that hurts less than a bee sting. It’s a localized sting and doesn’t offer lasting pain or problems unless you’re prone to severe reactions.

However, the chances of getting bitten by a house centipede are slim. The pincers they use to sting other insects have a hard time causing any damage to human skin. A house centipede is far more concerned with getting away from you than retaliating.

How Do I Get Rid of House Centipedes?

House centipedes are natural pest killers, so they aren’t the worst bug to have around your house. After all, they take care of other pests for you. If you encounter one and want it gone, try using a cup and a sheet of paper to remove it from your home.

Seeing the occasional house centipede means they’re probably doing their job. You’ll often see them patrolling around and eating other bugs at night. However, if you see multiple a day, that might be cause for concern.

House centipedes stay in environments where they can thrive. If there are many of them, there could be an underlying pest problem you need to have professionally addressed. Or, they might just really enjoy your house and want to stay.

If you’re at your wit’s end and aren’t getting a rent check from them, here are some ways to make your home less hospitable:

So, Should You Get Rid of House Centipedes?

Now that you know about the house centipede and its ways, you can rest easy knowing it won’t cause any harm to your home or family. They stay out of your way and eat bugs that can cause actual problems for you. If you aren’t keen on them being in your home, there are plenty of ways to prevent them from returning.