Most landscaping projects involve the use of bark mulch, and Cedar mulch is one of the more common choices for homeowners. However, it shouldn’t be used in every scenario. Read on to learn when to use it and when to avoid it.

What Is Cedar Mulch?

Like other types of mulch, cedar mulch is used for a variety of reasons. From aesthetics to temperature control, it is used to both enhance the look of landscaping and improve the longevity of the plants it surrounds and protects. 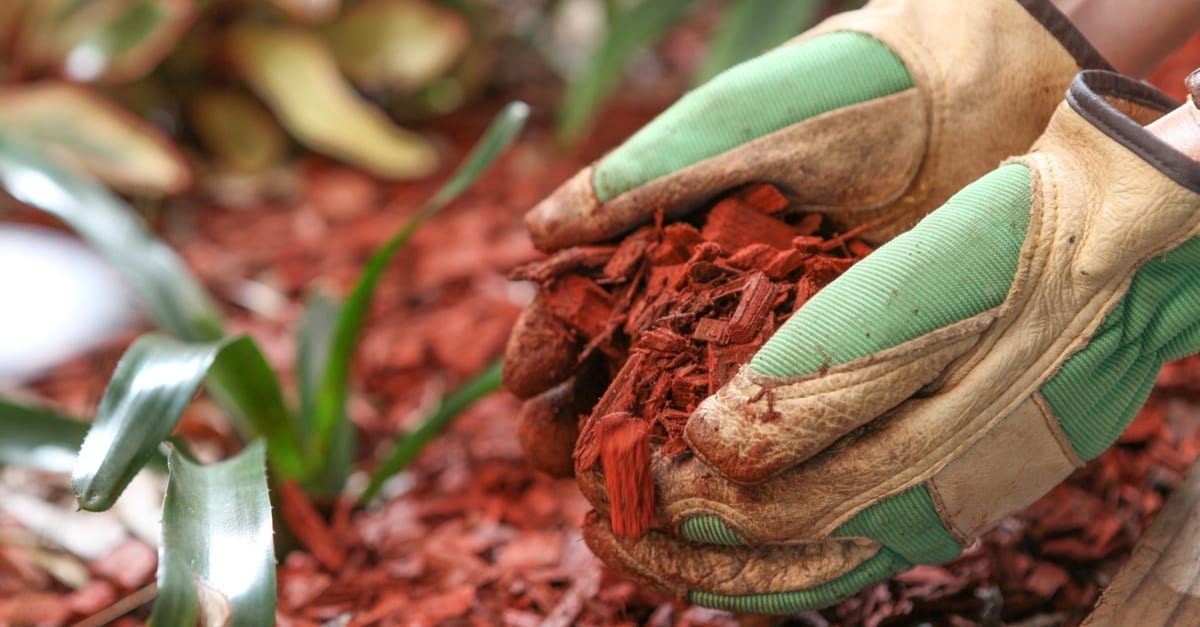 Cedar mulch is used to:

Although this wood mulch has many benefits, it also has a few drawbacks. Read on to learn when to use (or avoid) cedar mulch.

Click the button below to buy cedar mulch from Home Depot.

Benefits and Drawbacks of Cedar Mulch

Cedar mulch carries several unique benefits and drawbacks that other types of mulch may not. Before committing to applying cedar mulch around your property, discover the ways cedar mulch can be both a boon and a bane for your landscaping project.

It’s also widely available, making it simple to access for homeowners interested in using it. Mulching with cedar chips is advantageous because it has a few unique characteristics.

Cedar mulch is lighter and fluffier than many other types of bark mulch. This means it won’t suffocate new plant growth and germination at the same rate different types of mulch will.

For perennial garden beds and landscaping zones that don’t feature a lot of annual plants, this can help plants recover and bounce back stronger each spring.

Each chip and piece of cedar mulch is irregularly shaped, making the light layers of mulch “stick” together better. This has four significant benefits:

It’s worth mentioning that cedar mulch smells delightful spread around a yard or garden bed. It is highly aromatic because it contains high levels of oil.

Together, these benefits can create a healthier landscape with plants that thrive in the temperature-controlled, nutritious soil it helps create. These characteristics make it an attractive choice for both gardening hobbyists and homeowners interested in landscaping. 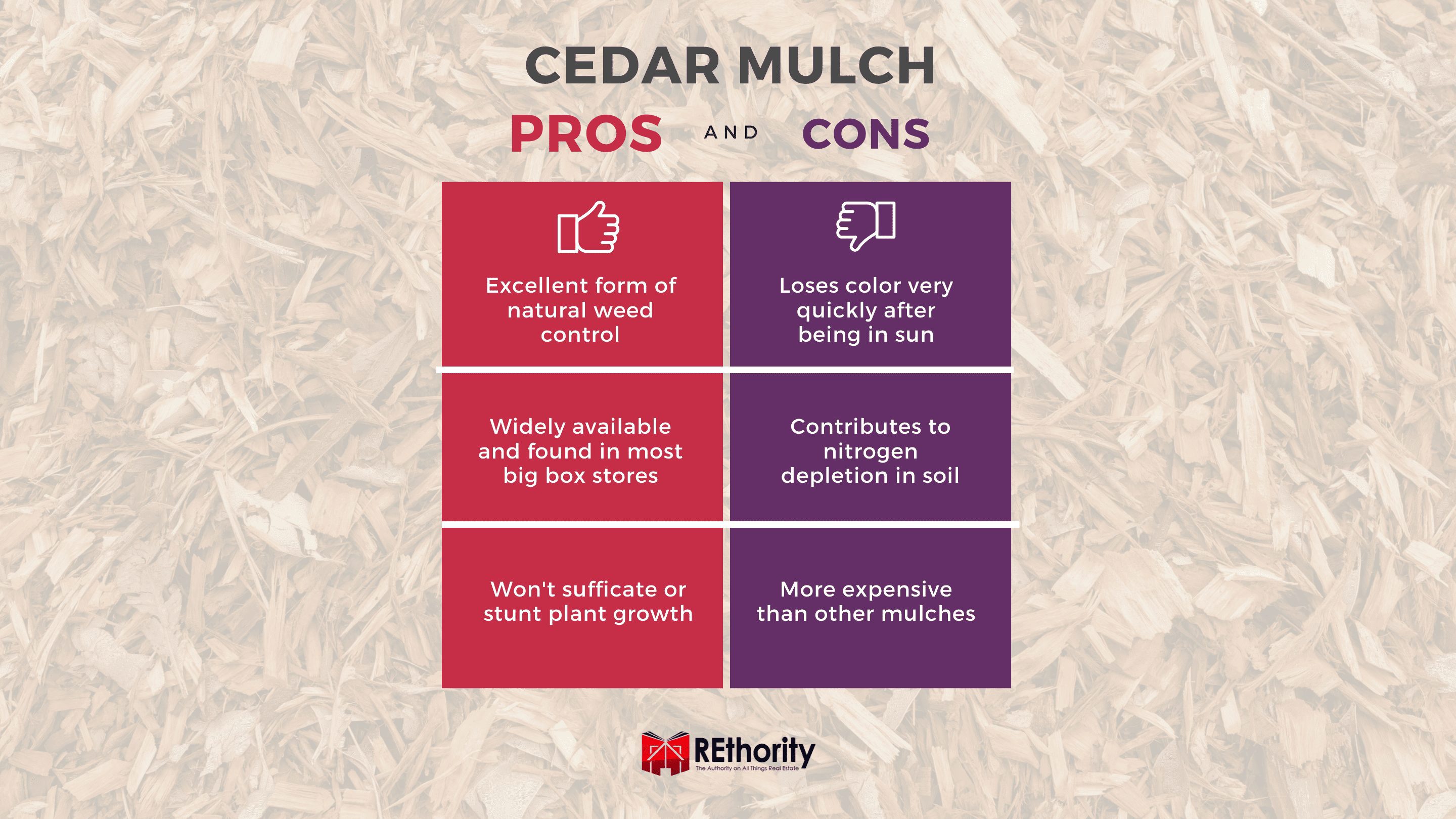 As beneficial as natural cedar mulch can be, it’s not without its cons. In terms of other wood mulches, cedar wood mulch is one of the types that are quickest to lose its color (as well as the pleasant aroma it’s often known for).

Some people don’t like the look of shredded bark in mulches as it’s less tidy than wood chips or bark nuggets. Cedar mulch is available in wood chip form, but that type is more expensive than shredded and is much heavier and denser than bark shreds.

Nitrogen depletion is another problem with cedar wood mulch, as well as most other organic types of mulch. As the wood shreds and chips break down into the soil, they use up the nitrogen in the soil.

Plants need this nitrogen as one of their natural fertilizers. If this mulch gets mixed into the soil over a period of time, it can stunt or retard the growth of the plants around it.

Cedar mulch is moderately expensive at an average price of $3.70 for 2 cubic feet. This amount of mulch covers about 100 square feet at the recommended depth of 2-3 inches. By comparison, the more common brown mulch costs about $2.30 for 2 cubic feet.

When to Use Cedar Mulch

There are time to use cedar much, and other times to avoid it. Read on to learn about both.

To improve the quality of soil short-term

Increased numbers of earthworms, more moist soil that doesn’t go through intense cycles of drought, and over-watering and natural weed control are all reasons cedar mulch can help improve the quality of the soil.

To inexpensively mulch a large area without requiring lots of maintenance

When cedar wood shreds are used instead of the more-expensive wood chips, it’s much less expensive to cover a large area with cedar mulch and reap the benefits.

In landscaping areas close to pathways and doors

The pleasant aroma of cedar can provide anyone walking nearby with a pleasant scent that becomes reinvigorated when it rains or has pressure applied to it. ]

To create a natural, cohesive look in a flowerbed or yard

Cedar’s reddish tint quickly fades, leaving behind a milder, tan color closer to the appearance of natural wood. Used in a flowerbed or in landscaping, it can help create a natural, organic look (quite different from darker wood or rubber mulches) that complements the property.

Click the button below to buy cedar mulch from Home Depot.

When Not to Use Cedar Mulch

As we mentioned, there are times to avoid using this popular landscaping material. Read on to learn when not to use it.

In areas where plants will die and need to be replanted the following season, cedar mulch can pose a problem due to its tendency to deplete the soil’s nitrogen as it breaks down. The next year’s planting can suffer due to the lower levels of nitrogen in the ground.

In landscaping areas where rich color is desired

Some prefer the look of light-colored mulches, but dark mulches are also incredibly popular. They tend to mimic or imitate the look of tilled soil more closely. Cedar wood mulch, on the other hand, fades quickly and won’t retain rich color for long. Even directly after application, the color will be somewhere between tan and reddish-brown.

To lower soil pH and make it more acidic

Cedar trees grow best in acidic soil with a low pH, so many homeowners mistakenly believe that adding cedar mulch to very alkaline soil (high pH) will balance it out. This is not the case.

Cedar mulch won’t have much effect on the composition of soil except when it is decomposing, where it lowers the amount of available nitrogen in the ground. It does not make the soil more acidic.

While cedar mulch is popular, it can be expensive. If you seek to save money or simply use a different material, you can use one of the below materials. 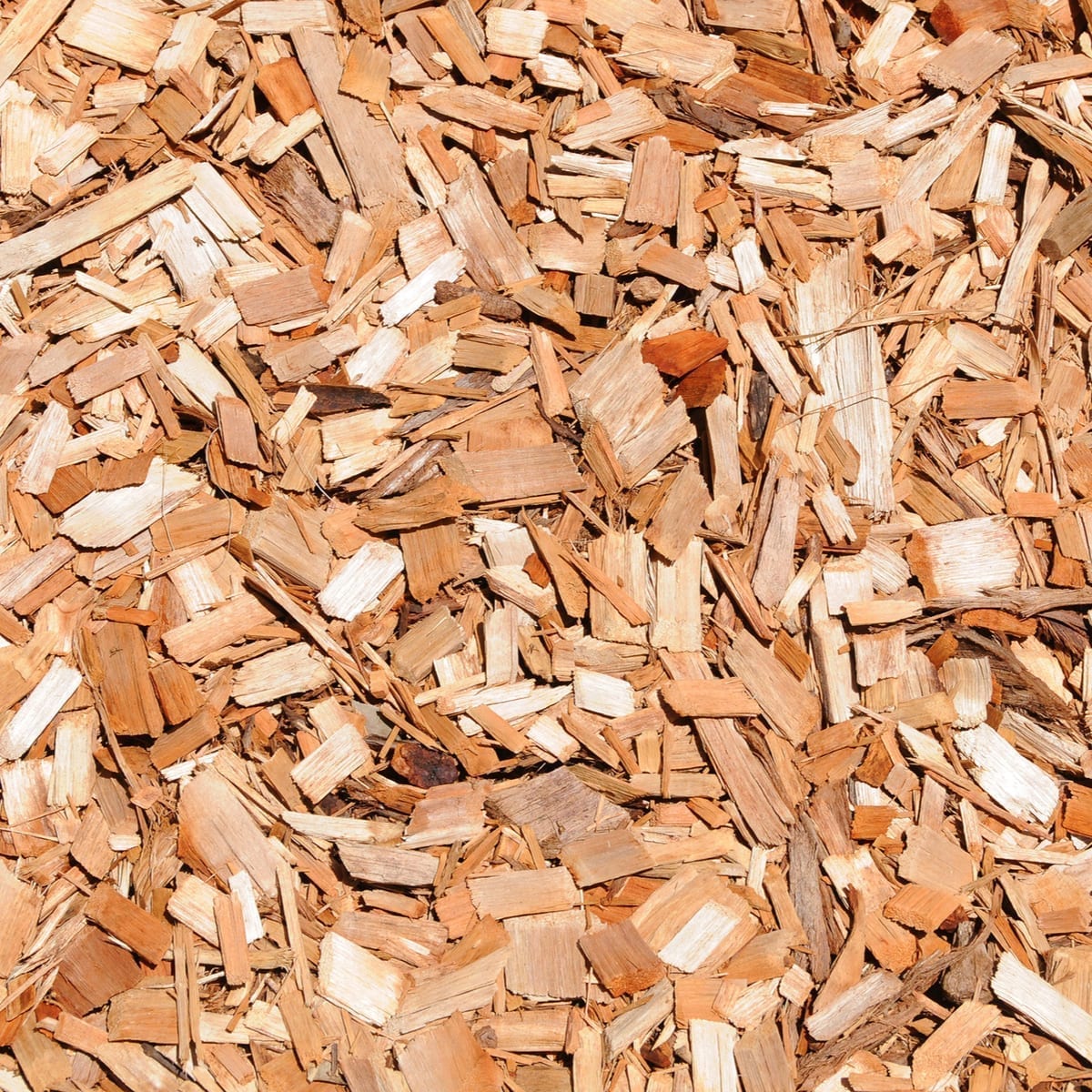 While it can be pricey, cypress mulch is a popular option due to its scent, color retention, and weed control properties. However, there are some problems with cypress mulch:

Because of this, immature trees are used in most cypress mulch, and they don’t have the same properties as mature trees (namely, they are less effective at pest control and rot faster).

It’s very dense and heavy. This is the property that makes it great for weed control. Still, it can also pose problems with germination by preventing seedlings from receiving sunlight and growing beyond the mulched layer. 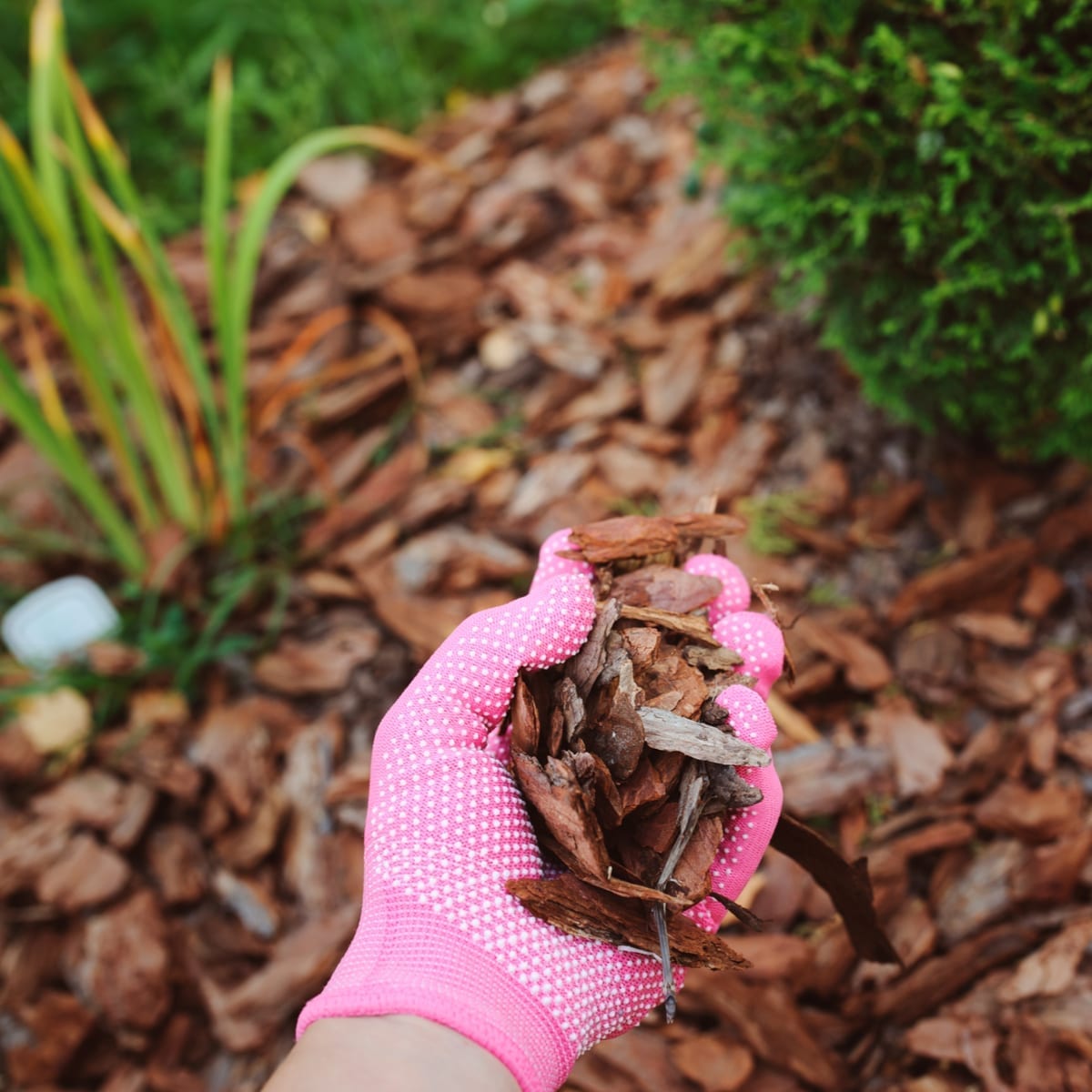 An acidic, chunky mulch, pine bark nuggets are useful in areas with very alkaline soil because they slowly raise the acidity of soil over time as they break down. Some problems with pine bark mulch:

Susceptible to erosion. The bark nuggets aren’t as dense as other wood chips because pine is a softwood. In heavy rains and winds, the chunks can scatter and require a lot of maintenance to keep an area covered.

Moderately expensive. The average price of pine bark mulch is more than most other wood-based mulches. 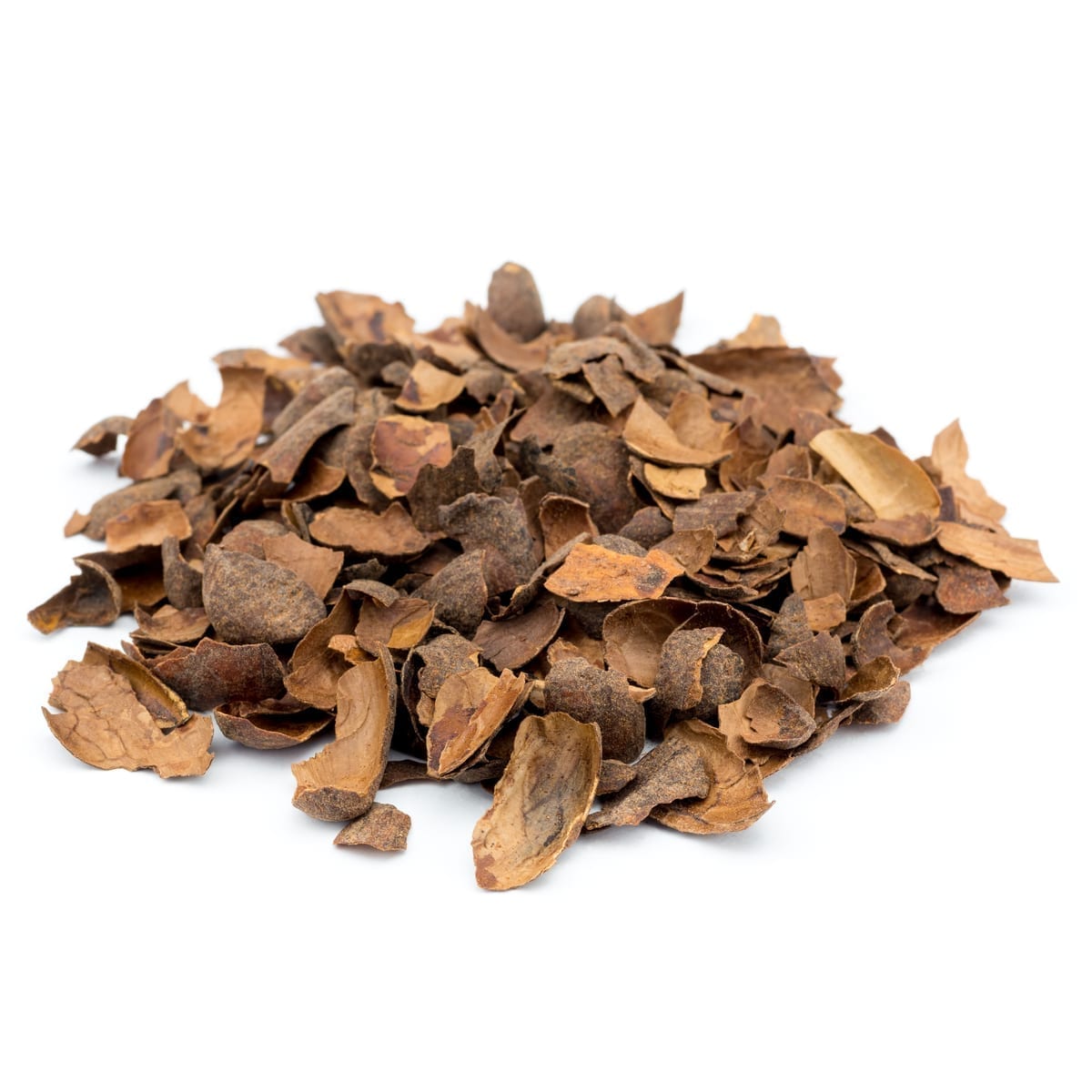 One of the most expensive types of mulch available, cocoa shell mulch is an exotic option that looks attractive and smells like chocolate (it’s made from the shells of cocoa beans).

Toxic to cats and dogs. Because cocoa beans and their pods contain caffeine and theobromine, they are toxic for cats and dogs to ingest.

Even homeowners without pets run the risk of a neighborhood animal ingesting the mulch, and there are many other, non-toxic options available.

Extremely expensive. Cocoa shell mulch would be best used in potting mixes rather than as a ground-cover mulch in landscaping because of its high cost. A bag containing 2 cubic feet of this mulch costs about $10 on average!

How to Apply Cedar Mulch

Be sure to purchase the right amount of mulch for the area you intend to cover. Keep in mind: 1 cubic yard of mulch will sufficiently cover (2-3 inches deep) 100 square feet.

Apply the mulch to the areas of your choice using a shovel (or trowel for smaller areas). Carry a tape measure to spot check the depth of the mulch every few feet to be sure you’ve applied enough.

Don’t skimp on the depth of the mulch to cover more area – you need at least 2 inches, preferably 3 inches, to sufficiently cover the soil and gain the benefits of using the mulch.

Layers that are too thin will quickly erode and be overtaken by weeds. If applying the mulch to an area without a physical border or barrier, slope the edges downward gently, not at a steep angle, to help deter erosion during heavy rains.

Should You Use Cedar Mulch?

In comparison to other types of mulch, cedar is an excellent choice for landscaping and perennial gardens. It is not the right choice for annual gardens and flowerbeds.

While it does not make soil more acidic, it can deplete the nitrogen that naturally occurs in soil and make it hard to grow new plants in later seasons.

With a moderate cost and an attractive, natural appearance that blends into the landscape, it’s a viable option for any type of property or garden. If you prefer the crisp look of defined wood chips or a dark brown to black color, cedar mulch is not likely to be your top choice.

But if the idea of a mulch that is lightweight, aromatic, and acts as an invitation to garden-boosting earthworms is appealing to you, cedar mulch may be the perfect choice for your outdoor project.