Wondering If You Can Put a Water Heater Outside?

It’s not uncommon for homeowners—particularly those with limited indoor space—to muse about possible alternative placements for that all-important appliance, the water heater.

More to the point: can you place a water heat outside? If so, what are the pros and cons compared with traditional indoor installation?

Can You Put a Water Heater Outside? 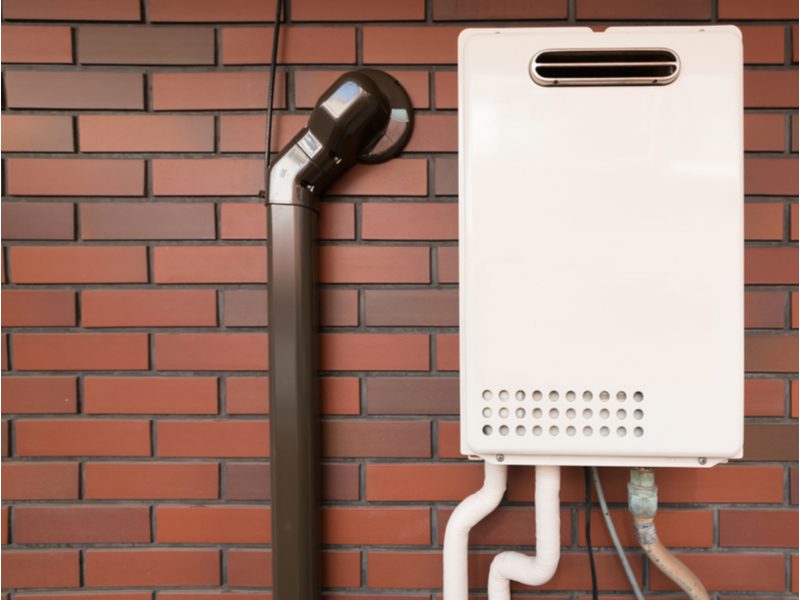 Let’s be real—water heaters (in their most familiar form, at least) are a nuisance. They’re bulky, awkwardly shaped, and practically impossible to put in without eating up tons of valuable space.

Furthermore, they can be a bit of an eyesore, depending on where they’re placed. Catching a glimpse of a dusty old water heater humming away behind a half-open closet door or in the corner of your bathroom can be enough to spoil your most earnest decorating efforts.

There’s only so much you can do to hide them, after all. Even sleek new tankless models, which tend to be far more compact and discreet than their monstrous predecessors, can interfere with the layout you’ve envisioned for your home.

They provide an unwelcome break in the visual field you’ve established in the room in which it’s stationed. But maybe it doesn’t have to be this way.

Maybe, just maybe, you could designate a spot for your water heater where it will never again offend your eyes and ears: somewhere like completely outside your home. Could such an arrangement be possible?

Not only is it possible to put a water heater outside, but specific models are specifically designed to make it easy for homeowners to do just that.

Even if you have no choice but to use an old-fashioned tank water heater to warm your household’s H20, there are ways to work around your unit’s material vulnerabilities and set it up so that it won’t butt in on your living space.

In this article, we’ll be offering a few tips for keeping your water heater out of sight and out of mind without sacrificing safety, practicality, or performance.

Read Next: How Long Do Water Heaters Last?

When to Put Your Water Heater Outside or Inside 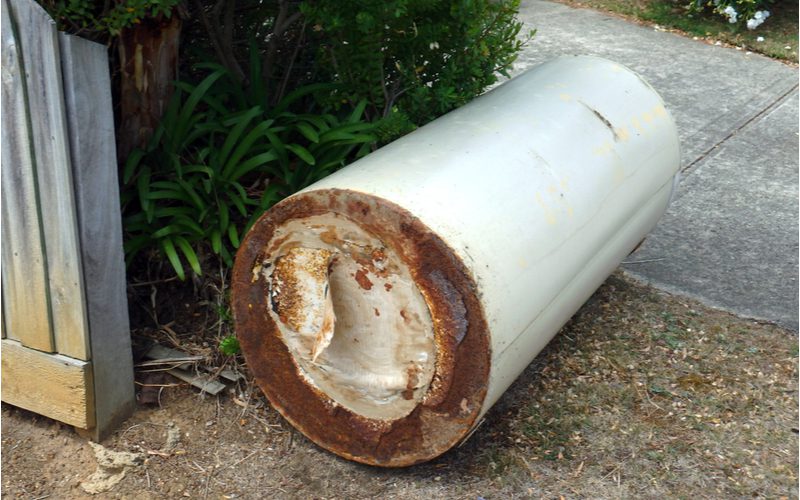 Before you make the call to move your water heater outdoors (a move which, as we mentioned, comes with both advantages and disadvantages), it will be helpful to learn just a little bit about the different types of water heaters and why they’re typically headquartered where they are.

Not all water heaters are made alike. There’s a dizzying diversity of water heaters on the market characterized by countless subtle differences in heating methods, dimensions, and consumer-friendly features.

That said, the most common varieties can be grouped into one of two broad categories: conventional and tankless.

Conventional tank storage water heaters are what most people picture when they hear the term “water heater.” As their name suggests, these appliances are designed to hold large quantities of water in a centralized storage tank.

Consequently, they’re the biggest water heaters out there by far.

Tank storage water heaters come in a wide range of sizes, from adorable mini-boilers that hold no more than 20-30 gallons to monstrous 80-gallon juggernauts capable of supplying enough water for 8-10 people at a time.

However, even the smallest units consume more precious real estate than many homeowners are comfortable with.

The biggest upshot of conventional tankers is that they’re easier and less expensive to operate, maintain, and service compared with more modular tankless varieties—at least in the short term.

Tankless water heaters are a relatively recent innovation in water-warming technology. The most apparent difference between them and their conventional counterparts is their lack of a storage tank.

Rather than relying on a stockpile of water that’s preheated in anticipation of future use, tankless units contain super-heated coils that rapidly increase the temperature of the water as it flows through the internal plumbing.

For this reason, they’re sometimes referred to by the pseudo-nickname “on-demand water heaters.” Tankless water heaters only warm as much water as you need when you need it.

Should you opt to put one in your house (or outside of it), you’ll never have to worry about running out of hot water if you’re doing a sinkful of dishes in the winter or end up last in line for the shower.

Technically speaking, nothing is preventing you from installing a conventional tank storage water heater outdoors. Doing so successfully, however, may require some infrastructural finagling.

Unless you live in an area with a mild, dry year-round climate, rain and other kinds of precipitation will be an immediate cause for concern. Conventional water heaters are, therefore, almost always housed in some kind of protective shelter when situated outside the home.

In some cases, you may be able to purchase a locker-style metal cabinet large enough to accommodate your appliance.

Otherwise, you’ll have no other option than to build such an enclosure yourself, or else pay to have one built. The possibility of inclement weather will also force you to come up with a way to elevate your tank off the ground.

After all, pooling water can lead to corrosion or other issues. Many companies manufacture galvanized steel stands for just this purpose, but acquiring one will add to the overall expense of your project.

The Virtues of Tankless Heating

On the flip side, tankless water heaters were made to go outside without complication. Since they’re small, they won’t draw too much attention when stuck on an exterior wall. They also come with their own watertight weatherproof housing.

Furthermore, you won’t have to worry about them freezing during the colder months, as they come equipped with self-warming capabilities.

The only issue you might encounter with outdoor tankless water heaters is that the electric ones can be prone to winter damage during power outages where the electricity remains off for an extended period.

Without any means of generating heat, the water circulating inside can grow colder and colder, eventually freezing solid—and potentially paving the way to burst pipes. That said, it would have to be pretty frigid outside for this to happen.

And utility specialists generally advise against installing water heaters outdoors in regions with colder climates anyway. That means a full-on freeze is not a likely scenario for most homeowners. In short, this is one area where tankless appliances are the hands-down winner. 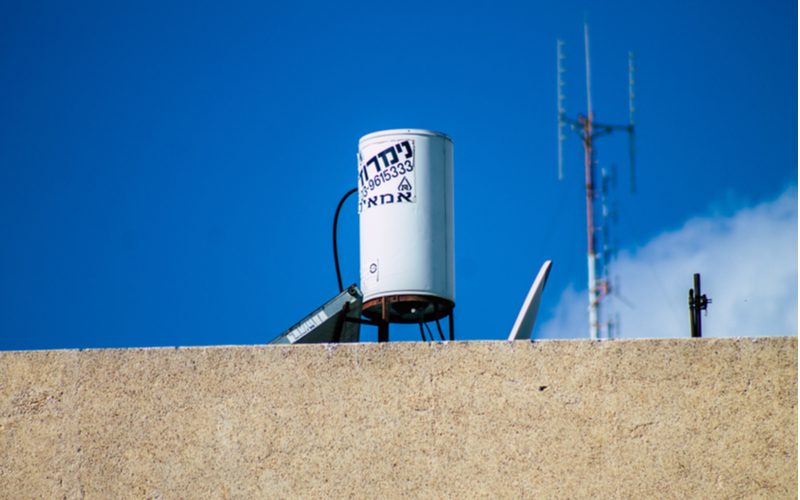 Got more nitty-gritty questions about the logistics of putting a water heater outside? You’re in luck because we’ve got plenty more knowledge to share.

How Much Does it Cost to Move a Water Heater Outside?

The average price tag for a project of this scope is around $5,000, plus the cost of new pipes, hoses, and fittings. Keep in mind that that figure doesn’t include the expense associated with hiring an electrician or utility specialist.

These professionals typically charge anywhere from $50 to $100 per hour for their services. With parts and labor included, you could be looking at closer to $6,000-7,000 by the time it’s all said and done.

Read Next: How Much Does a Water Heater Cost?

How Can I Protect My Outdoor Water Heater?

The best way to safeguard your exterior water heater from frigid temperatures is to make sure it’s well-insulated and receiving power at all times.

If you have any doubts, it’s a good idea to leave your water running (a slight trickle will do) when you’re expecting a particularly severe freeze. Another thing you might consider if you have a tankless water heater is adding a recirculation system.

These basically act as miniature storage reservoirs that will continually warm the water running through the pipes in your appliance, thereby preventing it from becoming an ice cube.

The colder the air outside (and, by extension, the ground), the harder your water heater will have to work to warm stored or incoming water, and the more heat will be lost to atmospheric cooling.

There’s not much you can do to combat this loss if you insist on putting your appliance outside, unfortunately, but it shouldn’t result in too much additional expense or inconvenience.

So, Can You Put a Water Heater Outside? 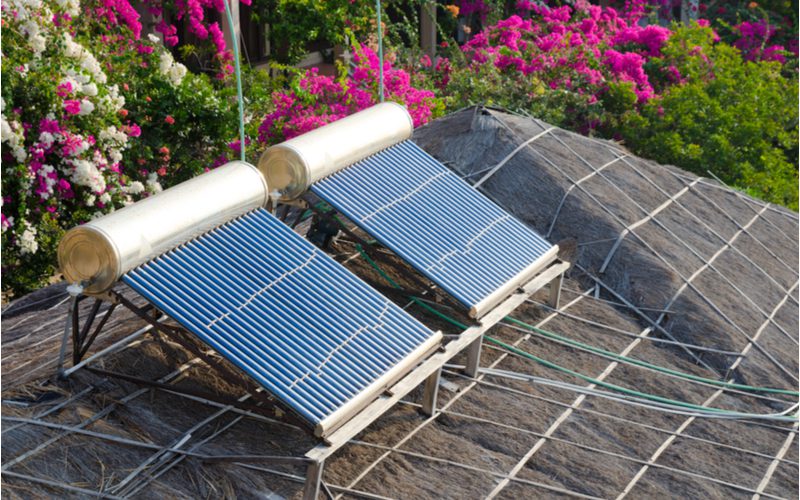 So there you have it — our answer to the eternal “can you put a water heater outside” debate. If you’re looking to unlock a few extra square feet inside your home, one way to do it is by ousting your water heater (we promise it won’t take your decision personally).

Tankless water heaters were invented with this kind of versatility in mind. Still, even conventional tank storage appliances can be relocated with great results, so long as you’re willing to make a few mindful provisions.

Either way, your unit will still crank out the hot water you and your family need for bathing, cleaning, and other essential tasks just as safely and effectively as it would if it were lurking within your home’s inner recesses.