When renovating or building a house, there are always details that go by the wayside.

You might be so busy focusing on the big stuff — how large the living room will be or how many bathrooms you are putting in – that you don’t think about what kind of furniture you want or the size of your bath towels.

Many people don’t know that there are different sizes of bath towels or how to properly stock a bathroom.

If you are finished with the main renovations and want to invest in the best and plushest bath towels, make sure you know which sizes you are getting and how many you need.

How Many Towel Sizes Are There? 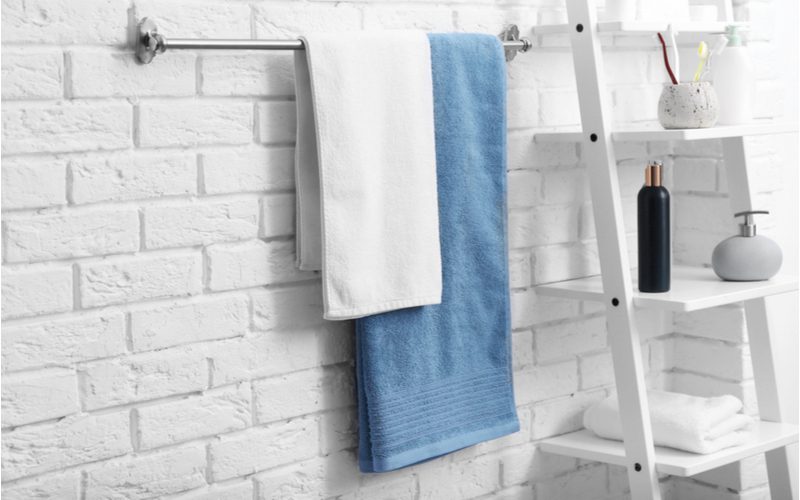 While there are many different towel sizes, the basic sizes are a washcloth, a hand towel, and a bath towel. These three sizes can cover all the different needs of a bathroom, from body washing to drying.

Most bath towel sets come with a washcloth, hand towel, and bath towel (or two of each). While other towel sizes exist, these three are primarily used in bathrooms commercially and residentially.

For full-size bath towels, you can generally buy regular-sized or extra-large towels. Extra-large bath towels are excellent for taller and larger guests or guests who like to wrap themselves in their towel completely.

The Long Answer: A Lot of Different Towel Sizes

While the basic three towel sizes do a lot of the work necessary for drying, there are many other sizes of towels (and variations within the standard towel sizes). In all, there are eight different towel sizes.

Here are the details on each towel size and the differences between them:

Of course, the smallest towel is a washcloth. It’s only 12 X 12 inches (or, in some cases, 13 X 13 inches). Washcloths were created to wash and dry faces and hands. They are also used in the shower and bath.

Washcloths are the smallest form of the towel but one of the most common sizes. Although they are intended for use in the bathroom, many people also use washcloths in the kitchen for washing and drying dishes or washing the counters.

Washcloths are used as rags for cleaning around the house and in the bathroom. Some people use “bath mitts” as an alternative to washcloths.

A set of washcloths is essential for any house. Usually, homeowners have a set in every bathroom and one in the kitchen. Washcloths come in every bath set and kitchen set, as well as sets on their own.

You might think that a hand towel is the next largest size. However, there is a size between a standard washcloth and a hand towel. The fingertip towel, or guest towel, is a smaller version of a hand towel.

It’s usually used in a guest bathroom or half-bath because it doesn’t require the same amount of space. Fingertip towels are easier to fold and hang on a towel rack.

Although it’s mainly intended for guest bathrooms and decorative purposes, fingertip towels are often given to children to use instead of hand or face towels. They’re smaller and easier to handle. You won’t find fingertip towels in many towel packs unless they are complete sets.

Another one of the most common towel sizes is the hand towel. Slightly larger than a fingertip towel, a hand towel measures in at 18 X 26 inches. It usually folds before hanging and has a more significant length than a guest towel.

These towels are a convenient size for many things, which is why they are part of almost every bath towel set. They fit on most towel hangers and sink-side racks and work well for the hands and face.

A bath mat, although it usually sits on the floor of the bathroom, is technically a towel. This is because it is made of bath towel material and comes in a complete bath towel set.

However, bath mats sit on the floor and soak up more water, so the terrycloth has more layers. Bath mats come in a variety of sizes, shapes, and materials. While classic bath mats double as towels, other mats are more rug material.

Towel rugs come in two main sizes: 21 X 31 inches and 23 X 39 inches. Which size you get depends on the size of the bathroom and the amount of space you need.

Bath mats are quite common but aren’t often made of towel material (terrycloth) anymore. However, you can still buy a full bath set with a matching mat or find a bath mat that goes with your bathroom theme.

Of course, you can’t have a list of towel sizes without a regular bath towel. Bath towels have a standard size but vary widely, as most companies try to sell bigger and softer towels every year. Bath towels are also smaller than average when made for children or babies.

There are two main bath towel sizes: a regular bath towel and a large bath towel (not to be confused with a bath sheet).

A regular bath towel is 28 X 54 inches, and a larger bath towel is anywhere between that size and the size of a bath sheet, which is 39 X 59 inches. These sizes vary by brand and style of the towel.

Every set of towels comes with at least one bath towel unless it’s a kitchen towel set. You’ll usually get two bath towels, two hand towels, and two washcloths in a normal set. However, you can get larger sets or buy individual bath towels if you want more variety.

Once we move away from the bathroom, a gym or exercise towel is a little larger than a hand towel. It’s made to wrap around an athlete’s neck or hang over their shoulder so they can exercise and mop up their sweat.

Gym towels are generally 33 X 63 inches. They’re longer than hand towels, but about the same width, so they aren’t as bulky as a full-size bath towel would be.

Gym towels are also a rougher material–the terry cloth isn’t as soft, so it catches sweat but doesn’t absorb as much. Of course, gym towels don’t come in a standard pack of towels.

They are only used when exercising and are generally sold to gyms or sports equipment stores in bulk. However, you can order gym towels online or buy them at a sporting goods store.

Since the bath towel, manufacturers continually make larger sizes. Everyone wants to step out of the shower and be able to wrap themselves in a huge, fluffy towel. This is why bath sheets were invented.

They aren’t like bedsheets–instead, they’re huge towels, almost double the size of regular bath towels. Depending on the manufacturer, bath sheets can measure 39 X 59 inches or 40 X 72 inches.

The largest bath sheets are about the same size as a blanket and completely wrap around someone. They almost exclusively exist in luxury resorts, pools, and five-star hotels.

While you won’t generally find bath sheets in the towel aisle at the local store, you can experience their luxury at fancier hotels or spas. Bath sheets are generally sold in bulk to hotel chains instead of the general public. However, extra-large bath towels are available to mimic the experience.

Of course, we can’t forget the “outdoor version” of the bath towel, the beach towel. While it’s still a towel, a beach towel is a courser material. It’s less likely to catch small pieces of dirt because it’s not supposed to clean the body.

Instead, a beach towel should brush the sand off and dry off the body. Measuring around 31 X 63 inches, beach towels have a variety of sizes as well. Some are larger and softer than others–it generally depends on the price and the brand.

Beach towels are available at many stores. They don’t come in packs with regular towels, but you can buy multipacks of beach towels. 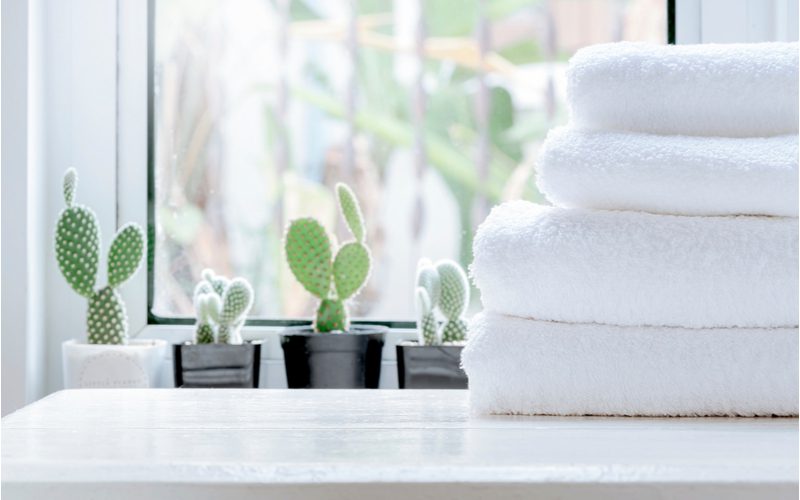 If you are getting a towel, odds are you don’t need much more than a washcloth, bath towel, and hand towel set. However, here are some things to consider when shopping for bath towels: 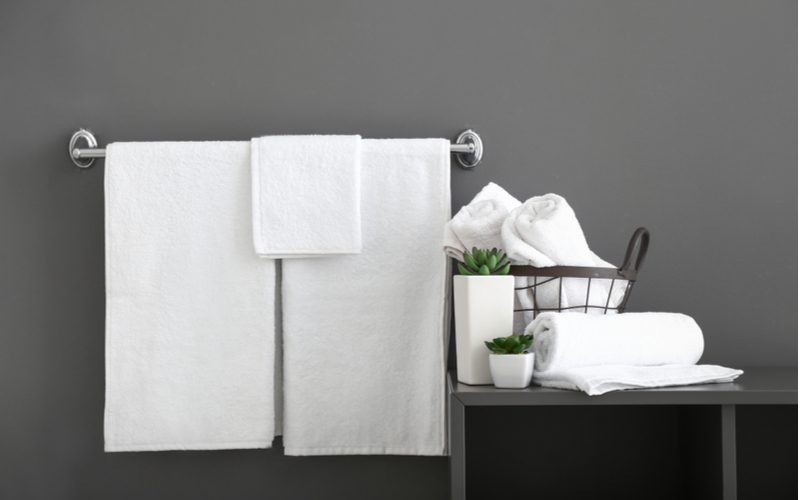 If you still have questions, you’re probably not the only one. The towel sizing system is a bit confusing. Here are some of the most commonly asked questions about towel sizing and various towels and the answers:

What is the standard size of towels?

The standard size of a bath towel is 28 X 55 inches. Hand or face towels are 18 X 26 inches. Both of these have slight variations, but these are the standard sizes.

What size is a kitchen towel?

Kitchen towels are the same size as bathroom hand towels. They are generally 18 X 26 inches and perform the same function. Although decorative towels might be slightly smaller, regular kitchen towels are all standard size.

What is the difference between a hand towel and a guest owel?

What is the difference between a hand towel and a tea towel?

Hand towels and tea towels are the same sizes–the only difference is their makeup and usage. While a hand towel comes from thicker cotton or terry cloth, a tea towel is made of a thin linen or cotton material. They are usually used to cover baked goods as they cool.

So, What Are the Standard Towel Sizes?

There are probably more sizes of towels than you previously realized. With all of the various towels, you can find what you need for your home, business, or home business.

Towels are among the most universally used household items and are necessary for everyone, so it’s essential to know the difference between them!