If you are building or renovating a home, you should know the standard ceiling heights for different rooms. Knowing this helps you design rooms that are comfortable, spacious, and inviting. Keep reading to learn these heights and pros and cons of tall ceilings.

What Is the Standard Ceiling Height?

The standard ceiling height is 9 feet in living rooms, kitchens, and bedrooms. However, this varies depending on the age of the home, use of the room, the owner’s taste, and other factors.

The International Building Code (IBC) sets standards for ceiling heights, which is currently seven feet. Many U.S. building codes are based on this set of standards. 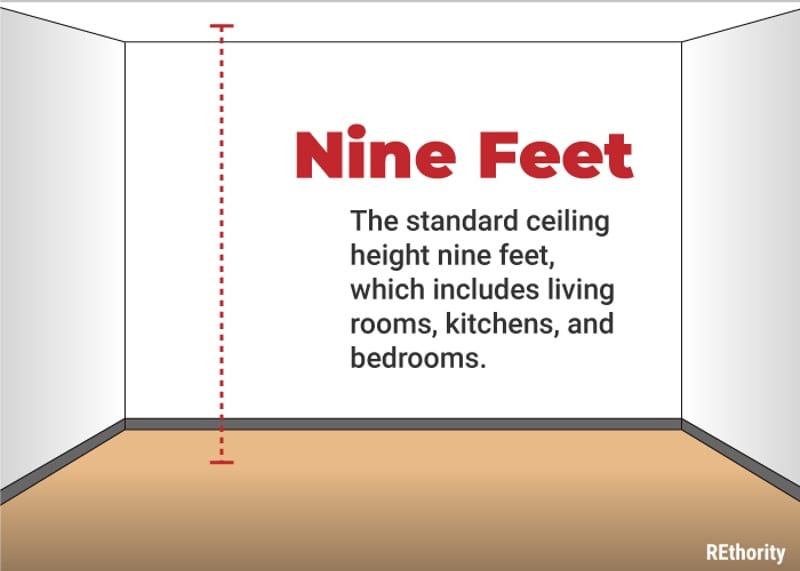 That’s just a minimum. Most U.S. homes built in the last few decades have ceilings at least this high, if not higher. The current standard ceiling rooms on the first floors of a typical new home is 9 feet. For rooms on second and higher floors, 8 feet is the standard.

Different rooms may have different ceiling heights. Bathrooms, hallways, and closets often have lower ceilings than bedrooms and living rooms. The tallest ceilings are often found in entryways of custom homes, where they may soar two stories tall.

Living rooms also may have very high ceilings, from 13 feet to 18 feet or more. More expensive custom homes are often built with ceilings 10 feet or 11 feet high. Some have 12-foot ceilings. 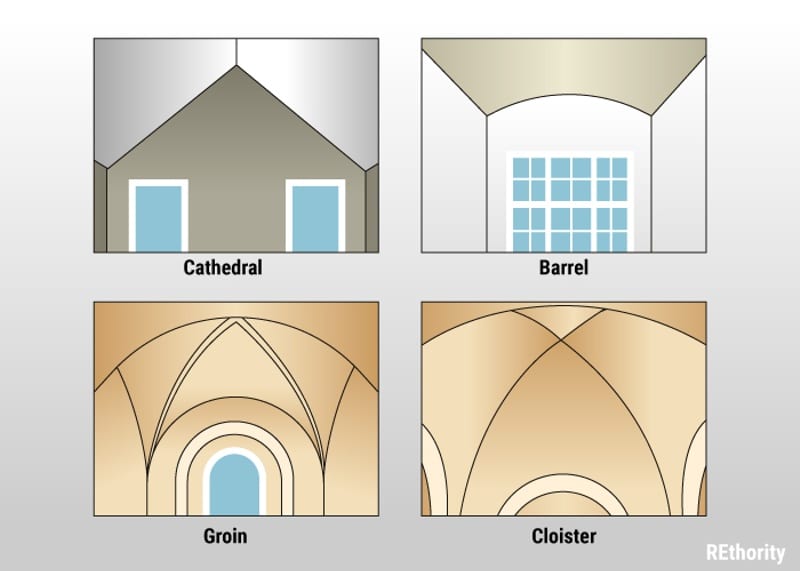 The type of ceiling also makes a difference. Tray ceilings have an outer rim that is typically 9 feet tall. There is an inner section where the ceiling rises a foot higher to 10 feet.

Vaulted ceilings are often found in front entries. They may also appear in openings connecting kitchens with living rooms.

A coffered ceiling features sunken panels forming a square or rectangle. This design is typically 9 feet.

IBC code says a room with a sloped ceiling, such as a finished attic, should have 7-foot ceilings over 50 percent of the room. The room size is measured as the square footage where the ceiling is at least 5 feet tall. 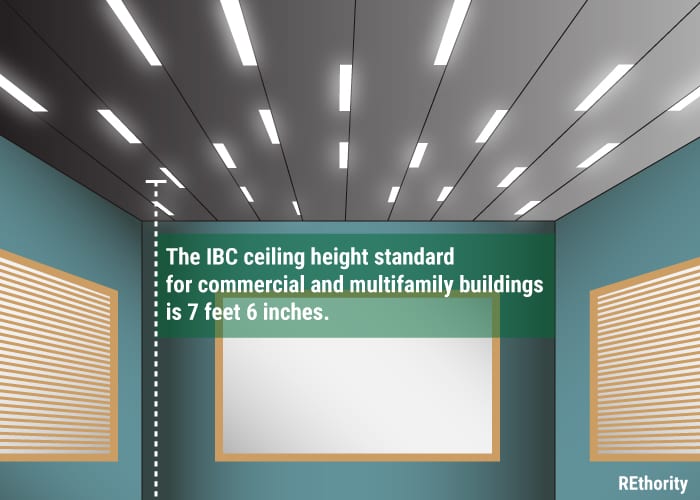 The IBC has a standard for commercial buildings as well. This includes multifamily buildings with more than two units.

The IBC ceiling height standard for commercial and multifamily buildings is 7 feet 6 inches.

This applies to all habitable rooms as well as hallways and common areas. The General Services Administration (GSA) has ceiling height standards too.

It oversees about 2.8 billion square feet of commercial space leased for the federal government. GSA is one of the most active lessees in the U.S., so its standards are widely used.

For smaller rooms such as private toilets and small closets GSA requires 7 feet 6 inches from floor to ceiling. Training and videoconferencing rooms have a 10-foot ceiling standard. And ceilings in mechanical equipment rooms have to be at least 12 feet high.

If you are choosing ceiling heights for a new construction or renovation minimum standards are just one consideration. Cost, aesthetics, fashion and personal taste also come into play.

But it wasn’t always this way. In fact, ceiling heights have evolved over the last few centuries. Homes built before the late 19th Century tend to have ceilings that would be considered quite low by today’s standards.

That’s because people weren’t as tall back then. If you are looking at a farmhouse from the early 1800s, the ceilings might be uncomfortable for anyone over six feet tall.

Higher ceilings increased the cubic footage of space that needed to be heated and cooled. So thrifty homebuyers preferred lower ceilings through much of the 1980s.

About then was the beginning of the McMansion trend. Home began featuring soaring entryways, grand staircases, and living rooms open to the second floor.

New homes built in the last couple of decades often have varying ceiling heights. An entryway may feature an impressive 12-foot ceiling, for example. Meanwhile a family room could have a cozier 9-foot ceiling.

However, styles change. Today many homebuyers feel grandly lofty ceilings give a room a cold feel. So the very high ceilings of the McMansion era are giving way to less dramatic ceilings.

Pros and Cons of High Ceilings 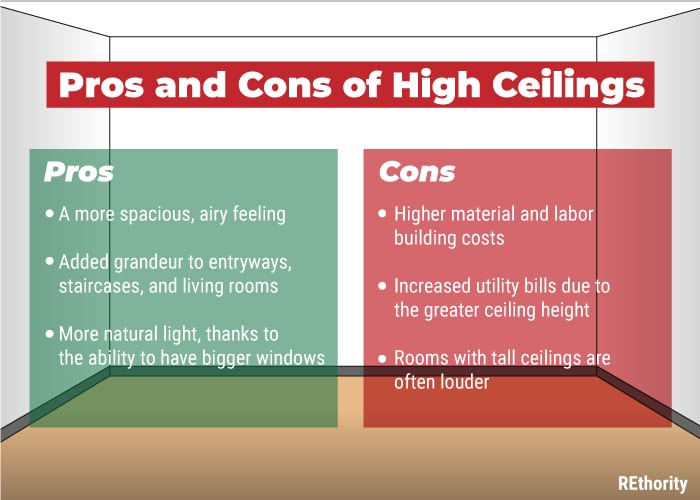 As with anything, there are pros and cons to consider. Don’t sweat it though. We’ve highlighted why high ceilings help (and hurt) your home and wallet.

Pros (Why They Help)

Higher ceilings can bring many benefits to a room. They can also add cost and, as noted, not everyone likes them. Here are some high ceiling benefits:

In some minds, higher ceilings are also associated with wealth and higher social class. So homeowners who are paying extra for a custom design may feel high ceilings ought to be part of the design.

It can cost more to build higher ceilings. After all, you are using more wood, more sheetrock, paint, and of course more labor. Not to mention the fact that with a tall ceiling, you’ll probably be adding crown molding and other features.

That may require adjusting the thermostat more to keep it comfortable. When ceilings are higher, the room is bigger and many other things may also need to be scaled up.

This includes furniture, window coverings, and other wall decorations. A family room with a two-story ceiling looks like wasted space to some.

They’d prefer to use that cubic footage for another bedroom or game room. Noise can also be an issue. High-ceiling living rooms can transmit sounds from televisions and stereos to bedrooms and other noise-sensitive areas.

The standards for ceiling height have evolved over a long time to meet the needs of residents and users of commercial space. Understanding minimums, heights for different styles, and the role of taste can help you pick the right heights in your next new build or renovation.