If you are looking at buying vacant land and building on it, or if you are considering buying an existing building with a septic system, you want to do a perc test. Read on to learn everything you need to know.

What Is a Perc Test?

Perc test is short for “soil percolation test.” It will tell you whether a lot can be used as a drain field for a septic sewer system. You may also hear a perc test described as a “deep hole test.” People may talk about a lot “perking” when it passes the test. 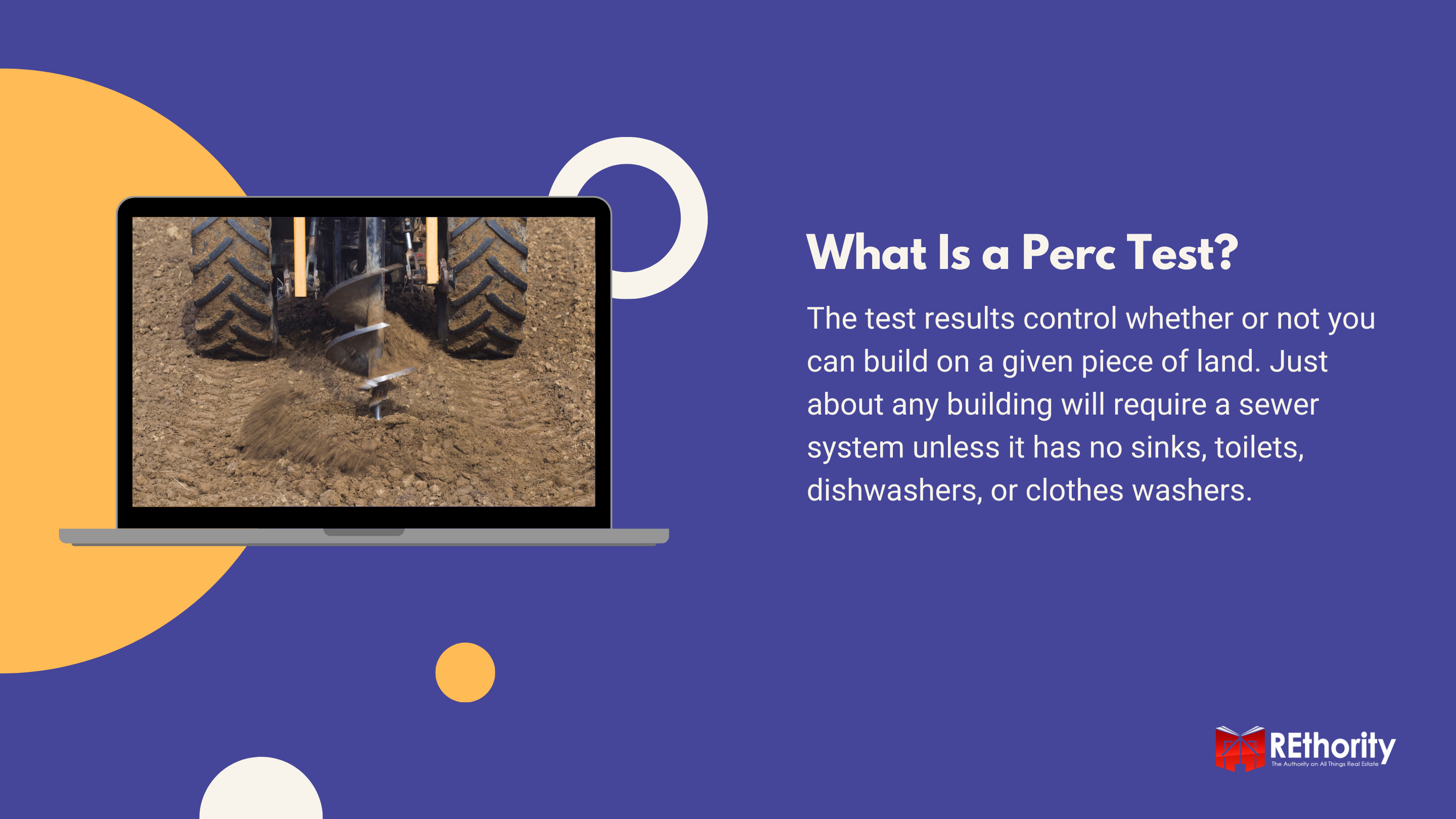 When to Do It

The city, county or other health authority that oversees the location of the lot will generally require a perc test before you can design, install, expand, or in some cases service or repair a septic system.

The test results control whether or not you can build on a given piece of land. Just about any building will require a sewer system unless it has no sinks, toilets, dishwashers, or clothes washers.

Unless the land has access to a municipal sewer system, building on it usually means building a septic system to handle wastewater. If a lot fails the perc test, it may be difficult or impossible to get a permit for a septic system.

The perc test results may have a lot to do with whether you want to buy a lot or how much you pay for it. If you already own the lot, your results may decide how much it is worth, and what you can do with it.

You can do an informal perc test by shoveling out a hole a few feet deep. Pour bucket of water into the test hole and see how quickly the water level drops.

Keep in mind that this is no replacement for an official test, but will give you a general idea what you’re working with.

Who Can Do a Perc Test? 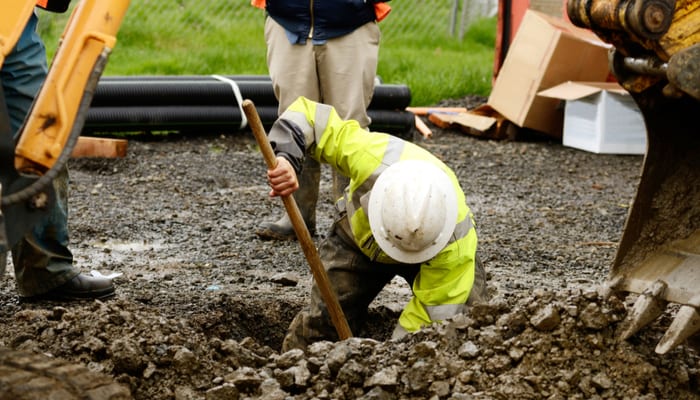 Local health department rules and regulations control who can do a perc test. Often, approved parties will include a soil scientist or septic engineer.

Additionally, some say that only health department employees can conduct perc tests. It may be wise to at least have a health official on hand when doing the test to make sure it’s done properly and to record the results.

Health authorities have different rules about how the test has to be done. They often call for digging several test holes five to seven feet deep in various locations in the area where the septic system drain field or leach field would go.

The holes may be drilled, dug by hand, or dug with a backhoe or other piece of power equipment. The rules may also specify how much water is to be poured into the hole.

You can get an idea whether a piece of land is likely to pass a perc test by checking nearby properties. If they have septic systems installed, that suggests they passed a perc test and your nearby lot will also pass.

However, this is no guarantee, as rules may change and even next-door lots may have very different soil percolation.

How to Do a Perc Test

To do a perc test, first dig a hole several feet deep. After pouring some water into the hole, place a board across it and measure down to the surface of the water.

After waiting from a few minutes to a half-hour or more, measure the water level again. The number of inches the water has dropped gives the soil percolation rate.

If enough water doesn’t seep out of the hole after a half-hour or so, the soil type may not be permeable enough to let a septic drain field work properly.

If groundwater immediately seeps in and fills the hole before water is poured in, the local water table may be too high to put in a septic tank. In either of these cases, the lot will probably fail its perc test – at least in that exact spot.

Conduct this same test in another spot to ensure you have accurate results everywhere. For example, in a sloping lot, a location on the higher side is more likely to pass.

Pros and Cons of Perc Testing

As with anything, there are both pros and cons. While developers are familiar with perc testing, first-time land buyers may not have thought to do this. 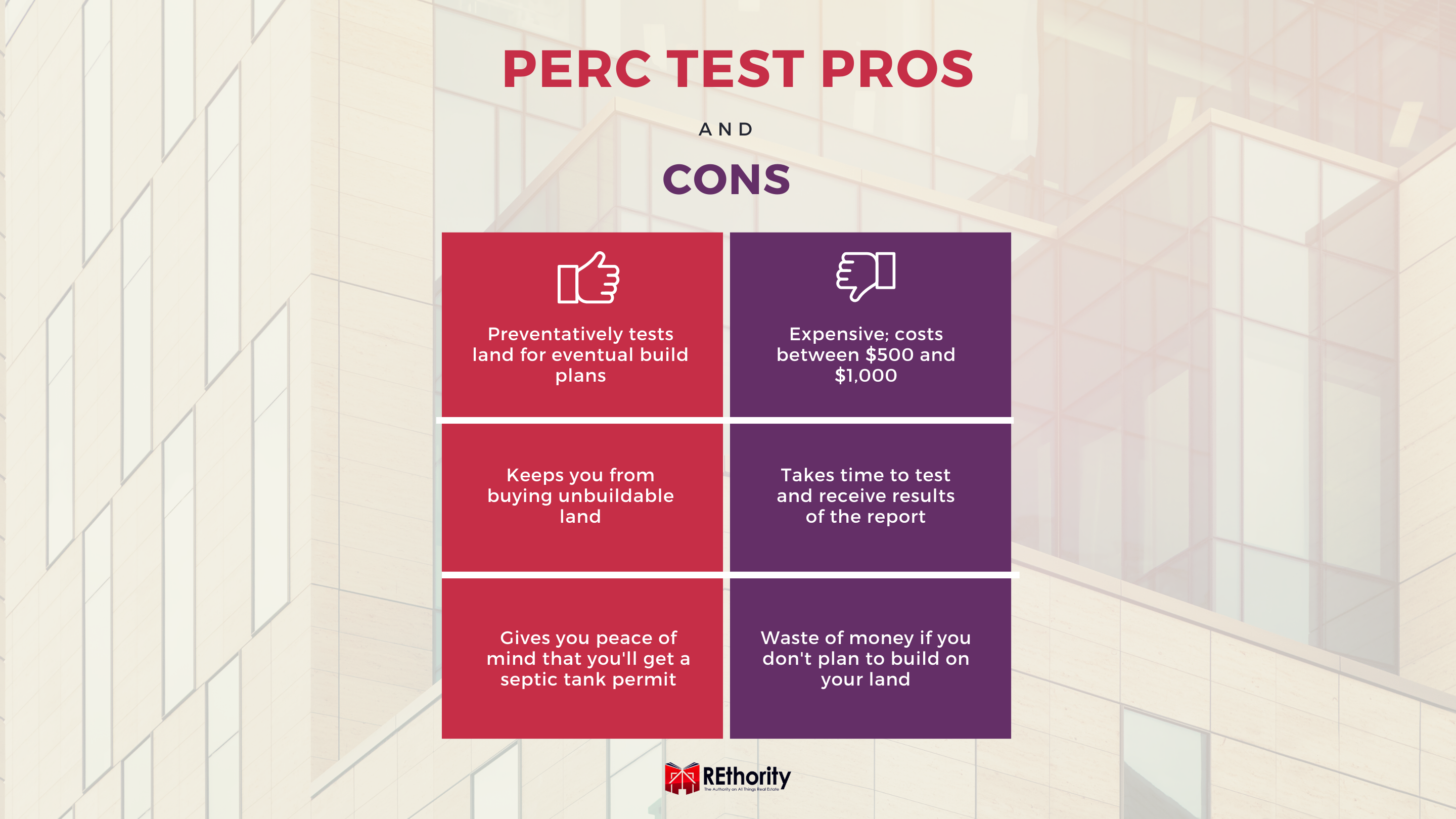 You can get some idea of a lot’s chances of passing a perc test by examining the soil and any water features. Sandy soil is likely to drain better, improving percolation.

A nearby pond, stream swamp may suggest a high water table and poor perc test results.

Of course, there are cons to everything, and perc tests are no exception. Some the cons include:

When to Skip the Test

Sometimes you may decide to skip the perc test when deciding on a land purchase. Examples include:

You may still be able to build a home or other wastewater-producing building on a lot that fails its perc test. Depending on rules, you can sometimes put in a modified septic system with additional filters, for example.

Or you may be able to put a septic system drain field on a neighboring lot that does pass the perc test.

Should You Do a Perc Test?

A perc test is a useful and sometimes necessary procedure when you are buying land that may need a septic sewer system built, expanded or repaired. While it isn’t necessarily cheap, easy or certain, it can give you valuable peace of mind.