What Is Interpersonal Communication?

Interpersonal communication is what happens when people exchange information. In addition to exchange of information as straightforward facts, it may consist of ideas, feelings, or other meanings. 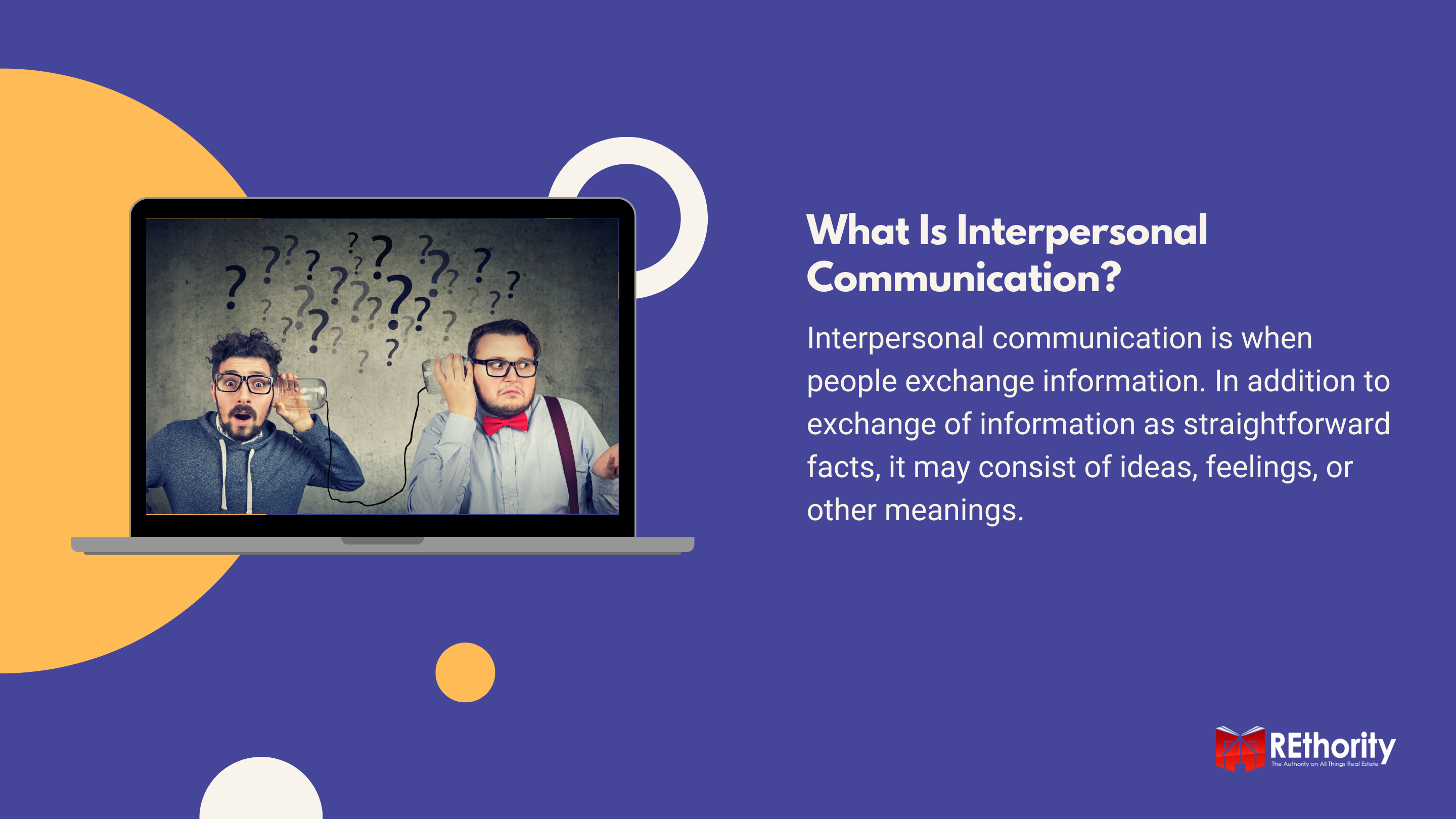 You are using interpersonal communication any time you:

Interpersonal communication is more than just words. It also consists of the participants’ facial expressions, body language, tone of voice, and gestures.

The words we use when talking or writing to someone else represent just part of the content of an interpersonal communication. Our message also gets delivered by:

Each of these non-verbal messages can be as or more important than the words we use. Non-verbal communication reveals otherwise hidden feelings and emotions. 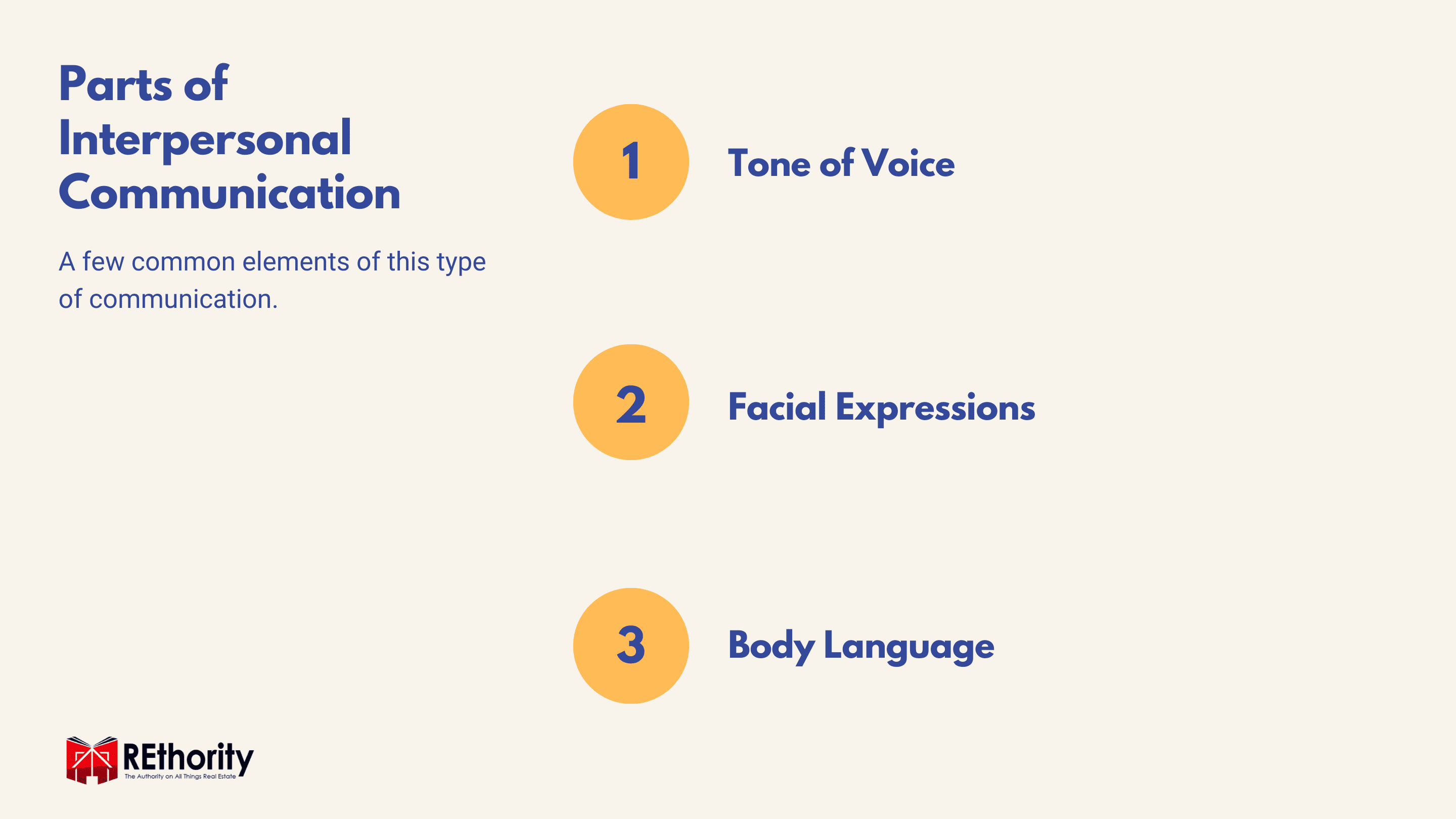 People aren’t always aware of non-verbal communication. However, non-verbal messages are always being conveyed, even if both parties are silent.

The words being spoken contain the message the sender wants to convey. The non-verbal cues may reveal another, unintentional message that reinforces or contradicts the words.

It’s a good idea to keep in mind the fact that interpersonal communication is always taking place any time two people are together. Even saying nothing, including not responding to an email, conveys a message of its own.

Interpersonal communication is usually a two-way process. Both parties are sending and receiving messages constantly, using both verbal and non-verbal means.

For instance, while one person talks, the other may look inattentively out the window. This clearly conveys a message of its own.

Sometimes interpersonal communication can be one-way. When a broker tells an agent in the office to hold an open house on a property, for instance, no reply may be expected.

Noise is always present in interpersonal communication. It’s interference that causes a message to be garbled, incomplete or not received at all.

Noise can be physical, as in the case of a static-filled phone line. It can also be psychological or semantic, as when someone uses technical jargon you don’t understand.

Cultural differences can be a major source of noise. Noise can’t be completely eliminated but it can be reduced and controlled.

Feedback consists of messages from the receiver about the messages form the sender. When two people talk face-to-face, feedback shows up as nods, frowns, shrugs, and other non-verbal communication.

Feedback can also be explicit, such as when someone responds dismissively or argumentatively to a message. It’s also two-way and, in the case of face-to-face communication, it’s simultaneous.

The physical manner of carrying a message is also important. This is known as the channel.

In face-to-face communication there are two channels: speech and vision. When talking by phone, speech is the only channel.

The choice of channel is important and can carry its own meaning. If a broker announces a layoff by email, it communicates a lack of caring, no matter what the email’s words say.

Context is the environment in which the communication happens. The context can influence the content and style of communication.

For instance, you communicate differently when you’re in the office than you do when standing in the backyard of a property. Social context also matters. You speak differently to a colleague than to a customer.

It’s important to consider context when engaging in interpersonal communication. Most of us do this automatically, without thinking of it. But when a message isn’t received effectively, the reason may be that the context wasn’t formulated correctly.

Face-to-face communication, telephone calls, and Facetime meetings are synchronous. Messages are received as soon as they are sent. Feedback also happens at the same time.

Emails, texts, voice mail, faxes, and snail mail are all asynchronous. The message is sent and some time goes by before it’s received and a reply, if any, is sent back.

Anytime misunderstanding occurs, it could be due to a failure of interpersonal communication. Because effective communication has so many parts, there are lots of ways things can go wrong, including:

The consequences of failed interpersonal communication can be serious. In addition to wasting time, it can alienate employees or co-workers, drive away customers, or create bad feelings toward the company or the individual.

There isn’t just one way to communicate. People tend to favor various communication styles. There are four widely recognized styles of interpersonal communication:

Aggressive communication involves dominating others. This type of communicator may try to exert control by using a loud voice, criticizing or even threatening other participants.

These people are often leaders and can be seen as can-do sorts who command respect. They may use phrases such as, “You’re wrong” and “It’s your fault.” 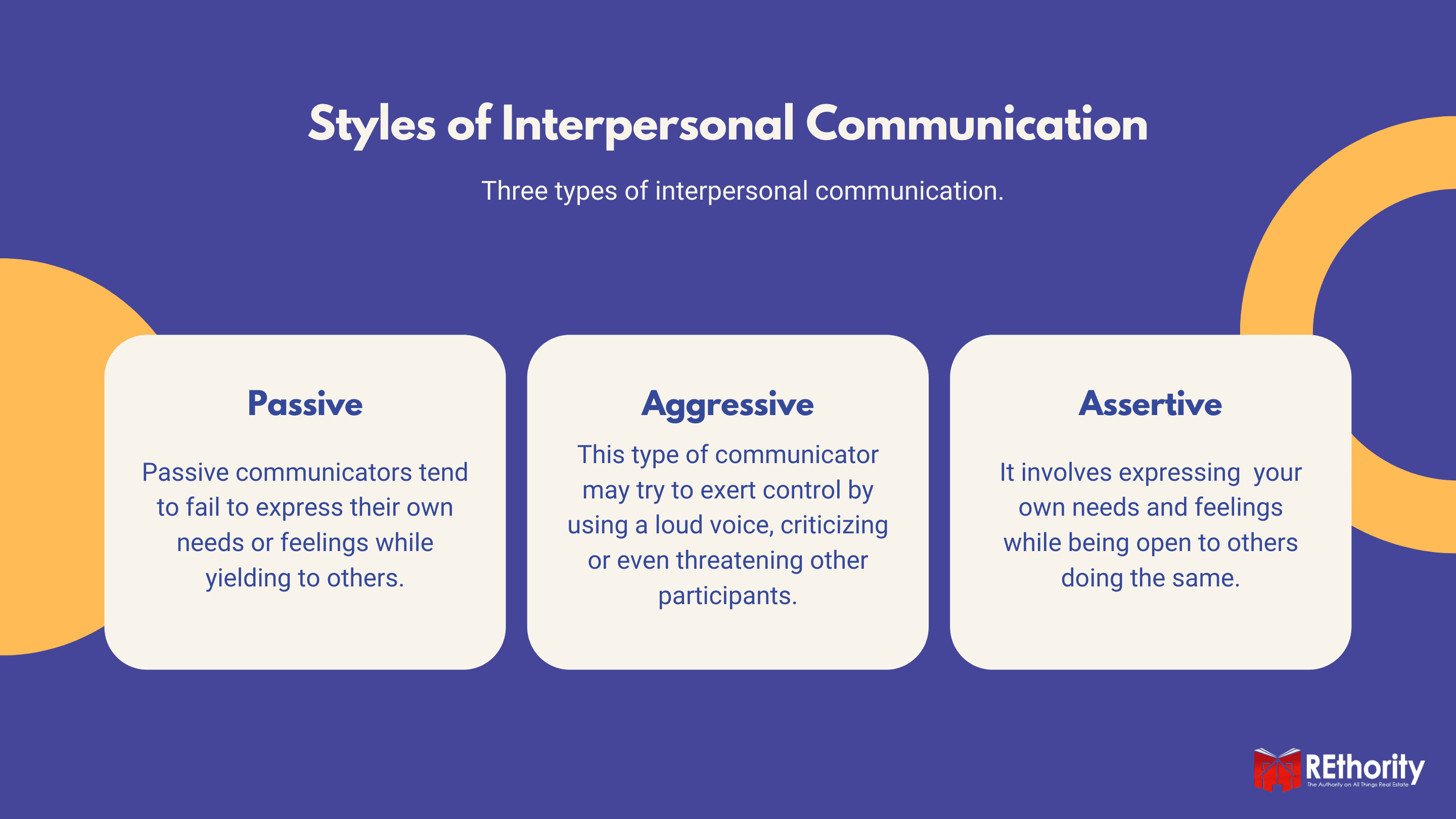 Passive-aggressive communicators seem to be passive and uncaring. However, they are actually feeling and expressing resentment or anger in less visible ways.

The assertive style is generally seen as the most effective. It involves expressing  your own needs and feelings while being open to others doing the same.

Assertive communicators may seem to be after a win-win that balances everyone’s rights, wishes, and feelings. They often use “I” statements to own up to feelings without blaming others. For example, “I feel irritated when you show up late for a meeting.”

If you need to, you can learn to be more effective at interpersonal communication. Here are five skills that can promote good communication:

Interpersonal Communication in a Nutshell