You may know that everyday household products can ward off insects, but do you know how to get rid of wasps with vinegar? We’ll show you how to do just that in our complete guide below. 4 Pack Wasp Trap Outdoor, Wasp Catchers for Outside, Use With Vinegar Check Price
We may earn a commission when you click this link, at no extra cost to you.

You don’t necessarily have to invest in insecticides if you have a wasp problem at home. Besides costing you money, you could be exposing your family to harmful chemicals.

Vinegar is one of the many simple household products that can help you get rid of these insects without using pesticides. Wasps have a strong sense of smell that helps them to find food. And you can use this to your advantage.

They can’t withstand vinegar’s pungent smell, making it a cheap way to keep them at bay. But beyond warding them off, combining vinegar with other everyday products can also kill wasps.

The Difference Between Wasps and Bees

It is easy to confuse wasps with bees, especially because they both have a similar shape and build nests. While these flying insects can cause some level of harm, you need to figure out which one you’re dealing with.

Here are some physical features that set wasps apart from bees:

Wasp stings and bee stings are both painful. However, most bee species, such as the honey bee, will not attack unless they feel threatened. This is also true about some wasp species.

For example, the cicada killer wasp is not likely to sting if you leave it alone. In fact, the males don’t have a stinger. Conversely, a bald-faced hornet and yellow jacket wasps are more aggressive and will sting you without hesitation.

A sting from a wasp will not likely kill you, but wasp venom is poisonous and can cause severe irritation and pain. Reactions can be mild or serious and can cause your body to go into shock, especially if you’re allergic to the venom.

How to Get Rid of Wasps With Vinegar 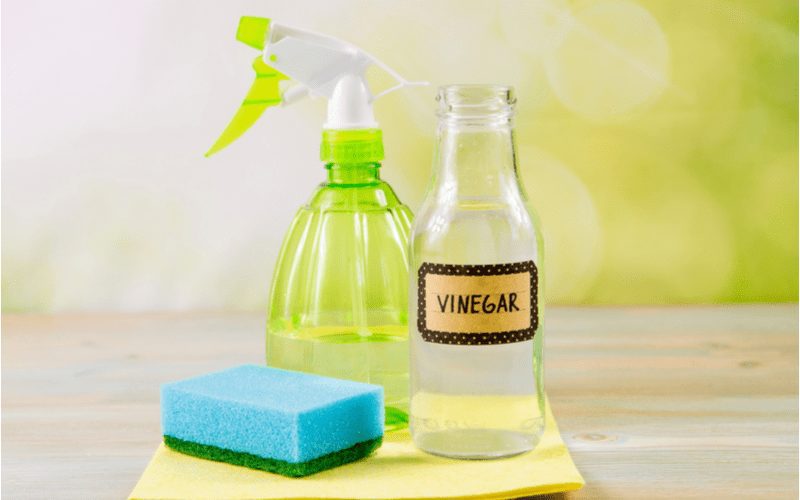 Now that you know how to identify wasps and how dangerous their stings can be, we’ll show you how to get rid of them with vinegar using two simple but effective methods.

This first method creates a DIY wasp killer, so use it if you plan to kill wasps.

What you will need:

How to use the solution:

Use this DIY solution to both spray the wasps or to attract and kill them. Spray the mixture onto individual wasps that bug you, making sure to saturate them thoroughly until they stop moving.

Alternatively, you can spray the solution directly into small wasp nests to kill its occupants. If you plan to attract the wasps, cut the top of your plastic bottles to make a wider opening.

The mixture is enough to fill a few small plastic bottles, but you don’t need to fill them to the brim. Use strings to hang the bottles from structures around your home where they like to visit.

Their love for sugar will attract wasps to the mixture and trap them inside the bottle. The apple cider vinegar and dish soap solution will dissolve their coating and kill them within minutes.

This second method is best for homeowners who want to avoid killing insects or hurting the environment. Taking the steps below allows you to temporarily ward off wasps without killing them.

What you will need:

How to use the solution:

Generously spray the solution around your home, including outdoor sitting areas and infested indoor areas. This will not permanently eradicate the wasps.

But it can clear them off temporarily without harming them. This solution is a wasp repellent and will lose its effectiveness after a while. That means you need to reapply it often. 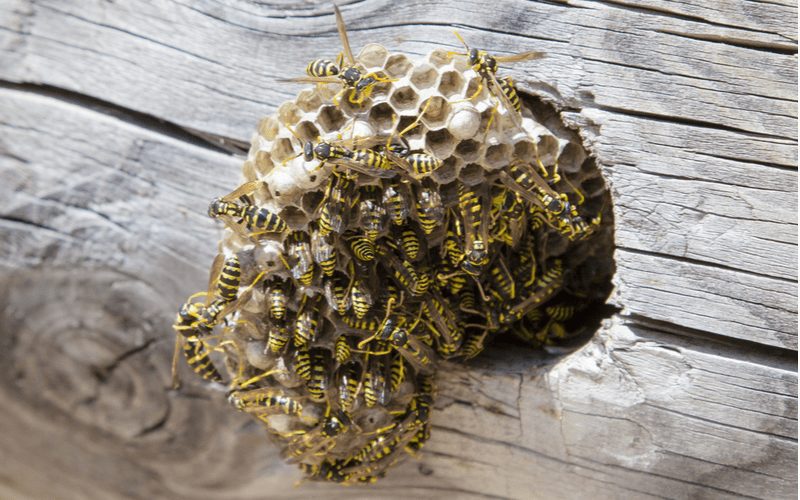 As the saying goes, “An ounce of prevention is worth a pound of cure.” This timeless axiom holds true, even for wasps! You can save yourself plenty of unpleasant experiences and the trouble of formulating home remedies with a little prevention.

This may sound counterintuitive, but swatting wasps does not help to keep them away. If anything, it does exactly the opposite.

Swatting and squashing may result in one dead wasp, but he’ll release a chemical compound that attracts other nearby wasps. But the chemical doesn’t stop at inviting other wasps; it also incites them.

It is best to walk away if you find a wasp hovering in your home or anywhere near you. You can use the vinegar technique, homemade wasp trap, or any wasp spray to ward off the insect instead of swatting it.

If you see a solitary wasp buzzing around, it could be an indication of a wasps nest somewhere around your home. This is particularly the case if the sighting is a daily occurrence.  Your best move is to find and seal off all entry points.

Instead of attempting to swat a wasp when you sight one, simply observe its flight path. In many cases, the stinging insect will lead you right to its entry or exit point. You’ll have a better chance of finding the entry point in the morning.

Most likely, these points will be open dampers, torn screens, unsealed vents, or cracks in your door and window frames. Properly seal these openings to prevent a wasp problem.

Cover or remove any food left outdoors. These flying insects are not only drawn to protein-rich and sweet foods, but they can also imprint the sources of these foods; they’ll continue to hunt a particular area for food long after the food is removed.

Make sure to properly dispose of food remnants after picnics or eating in your garden and backyard. Look for fallen fruits and remove them if you have trees around your home.

Wasps are territorial and will avoid building their nest close to another one. You can hang one or more fake nests in strategic locations around your home to trick them into believing that the territory is occupied. This should keep them far away from your home.

4 Pack Wasp Trap Outdoor, Wasp Catchers for Outside, Use With Vinegar Check Price
We may earn a commission when you click this link, at no extra cost to you.

There are plenty of home remedies to deter wasps. However, you need to make a simple but effective DIY spray if your goal is to kill these insects.

Add three tablespoons of lemon extract into a cup of water and spray it directly at the insects or saturate their nest at night.

Alternatively, create a soapy water solution by combining one teaspoon of liquid dish soap and two cups of water. Spray this generously on the wasps to kill them in a matter of minutes.

What do wasps hate the most?

Wasps strongly hate aromatic herbs, such as eucalyptus, thyme, and wormwood. Adding these plants to your garden, outdoor sitting areas, or around your patio is a good way to ward off the insects.

What smell do wasps hate?

Wasps generally do not like any mint-type fragrance, including scents from spearmint and peppermint oil. They also hate the strong smell of essential oils, such as the mixture of lemongrass, rosemary, clove, and geranium.

Also, wasps hate the pungent smell of vinegar. In addition to quickly irritating their sense of smell, vinegar’s overbearing smell can effectively mask other pleasant smells that can attract insects.

So, How Do You Get Rid of Wasps With Vinegar?

Well, there you have it — how to get rid of wasps with vinegar. We think the best way to prevent wasps is to attract them with a fake nest. Check out our pick above. It’s effective, looks nice, and will rid your home of wasps in no time.