With ever-increasing energy-efficiency standards for washers on the rise, HE detergent is increasing in popularity. But what is it? And how much should you use? We’ll answer these questions in our guide below.

Presto! Concentrated Liquid Laundry Detergent, Free & Clear, 128 Loads, 96 Fl Oz Check Price
We may earn a commission when you click this link, at no extra cost to you.

You’ve probably seen HE detergent alongside all the other detergents at the grocery store. Maybe it caught your eye because it seemed out of place, or perhaps because you didn’t know what you were seeing. Or maybe your washing machine’s manual said to use it.

In any case, HE detergent is a step forward in washing machine detergent, as well as washing machines themselves. It’s economical, it uses less water, and requires less energy.

What Is HE Detergent?

HE, or high-efficiency, laundry detergent has the same basic properties as regular detergent, including stain removers, fabric softeners, color protectors, and boosters, but specifically formulated to be used in high-efficiency washing machines.

How HE Detergent Works

If you’re looking for a more detailed description of this product and how it works, here are all the important aspects you need to know.

How Does HE Detergent Work?

High-efficiency laundry detergents are more concentrated than their non-HE counterparts, and they clean clothes in a different way. But it’s not just detergent. The detergent has to work in concert with the washing machine in order to get the desired results.

An HE detergent, designed not to get as soapy as its traditional counterpart, retains the ability to remove dirt effectively despite a high-efficiency washing machine’s lower use of water. That means high-efficiency detergent has to handle the same amount of dirt but also make sure the dirt doesn’t get back on the clothes.

It’s actually a complicated process in which the detergent acts the same way as an agitator in a traditional washing machine. So how does it work?

The main characteristic of HE detergents is that they’re low on suds, meaning the detergent doesn’t create a high volume of soap bubbles. The bubbles it does make work more efficiently, breaking apart stains and releasing soils.

The formula keeps dirt and stains in the water so they won’t get redistributed into the clothes. The detergent also disperses quickly in low water. Made for washing with colder water, HE detergents also offer another energy-saving benefit.

How Does an HE Washing Machine Work?

HE washing machines use about 50% less water to get the job done. That means they use less heat and energy as well, making these types of laundry machines friendlier to both the enviroment and to your wallet.

The reason behind this issue is because the detergent has a number of enzymes and other ingredients that need more time to work to remove stains from clothing.

Older washing machines have a process where they have a large agitator that churns clothes around, essentially beating them clean. That’s not how things work in a newer model. Instead of the machine doing most of the heavy lifting, it’s up to the detergent itself to get that job done.

Another feature of a high-efficiency washing machine is a beefed-up spin cycle. Because clothes in an HE machine spin faster, they don’t need to dry as long. Clothes are also constantly moving in an HE machine, which experts say helps keep the fabrics cleaner.

HE machines are also bigger on the inside because they don’t have the large agitator regular machines have, and more capacity means fewer cycles.

The machines can be either top or front loading: 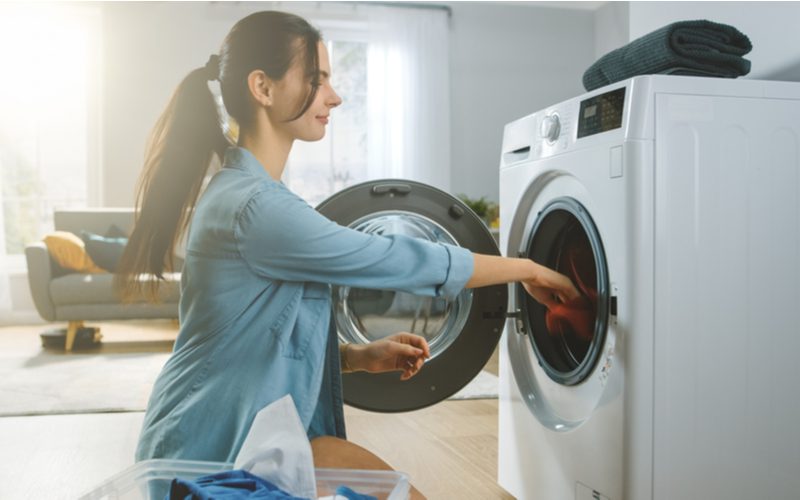 What Happens if I use Regular Detergent in an HE Machine?

If someone uses regular detergent in an HE machine, it gets too foamy and can potentially damage the machine. Not treating the machine properly can result in the growth of mold inside and the development of odors with time.

Because a high-efficiency washing machine uses less water, clothes won’t get rinsed off completely, which can result in a leftover, slimy residue.

This residue can build up with time and get caught in the machine and in the drainage pipe. The buildup becomes an even more significant problem if the laundry area isn’t well ventilated.

How Much HE Detergent Should I Use?

The easiest way to learn how much high-efficiency detergent to use is to read the label on the bottle. Sometimes just using a lot of detergent seems like the best course of action. The more detergent, the cleaner the clothes will be, right? Wrong.

Especially with HE detergent, less is more. A typical load of laundry typically only needs about a teaspoon or two to work. If you’re using single-dose HE detergent, only use one or two units, and only use two if the clothes are exceptionally dirty.

If you find yourself in a situation where your clothes are simply not getting as clean as they could, consider switching detergents. Some are going to be better quality than others. The majority of HE washers have auto dispensers for detergent and take either liquid or powder formula.

Never mix the two because doing so can cause clogs or caking in the working of the machine. Single-use laundry pods should be placed directly into the washer itself, never in the detergent dispenser.

Am I Using Too Much Detergent?

There are a few tell-tale signs to look for to determine whether you’re using too much laundry detergent. Here are a few:

How Often Do I Need To Clean an HE Washing Machine?

High-efficiency washing machines need regular cleaning. Most models have a maintenance cycle to complete this process. One way to help keep the machine clean is by taking clothes out right after washing.

Keeping clothes in the machine for an extended period can encourage mold growth and potentially cause odor. After a cycle, allow the unit to air out – especially a front loading washer.

Is HE Detergent Really Necessary?

If you’re using an HE machine, then HE detergent is absolutely necessary. However, you can also use HE detergent in a regular washer with no implications, but you’re probably going to need a little more than usual.

How Do I Know if a Detergent is HE?

The easiest way to tell if you’re using high-efficiency detergent is to look for the symbol. The universal HE symbol is the letter “H” and the letter “E” separated by a red dot. It’s in a blue field surrounded by a white swirling circle.

One of the drawbacks is that HE detergent is typically more expensive, but you end up saving money in the long run because you consume less water and energy by using the more efficient HE machines.

Presto! Concentrated Liquid Laundry Detergent, Free & Clear, 128 Loads, 96 Fl Oz Check Price
We may earn a commission when you click this link, at no extra cost to you.

So, What Is HE Detergent?

HE, or high-efficiency, detergent is a detergent specially formulated for use in an HE washing machine. High-efficiency machines use less water than regular ones. HE detergent, being more concentrated and lower on suds, are the perfect product for this kind of machine.