Unlike carpenter or fire ants that you’re used to seeing on the ground, you might see winged ants. These ants are in the mating stage of their life. Interestingly, most ants sprout wings in their lifetime to carry on their species. While harmless, they can be a nuisance in your home. But don’t worry — we’ll answer these questions below:

All About Flying Ants 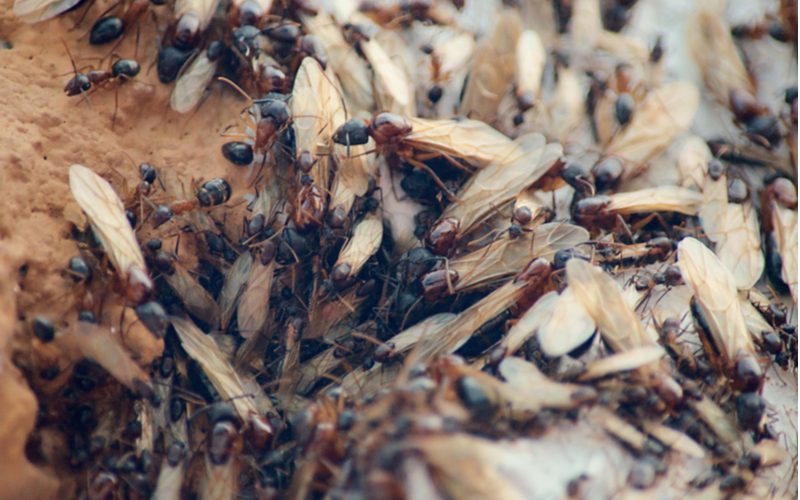 Flying ants are not a separate species of airborne arthropods. They are swarming ants ready to reproduce to start a new colony.

What Are Flying Ants?

When a mature colony wishes to create the next generation of ants, it produces winged ants, also known as alates. Most ants are infertile female workers that develop from fertilized eggs. If the worker ants take extra care of a fertilized egg and feed the larva and pupa, it can become a virgin queen as an adult.

Queens stand apart because of their larger size and ovaries. They also have wings early in their life to help them search for mates. Once they begin a colony, they tear off their wings.

Male ants (drones) come from unfertilized eggs. Once they reach adulthood, they will develop wings to engage in nuptial flight.

How to Spot a Flying Ant

The queens are larger than the drones. If you see an unusually big winged ant, it is probably a queen looking to mate or to start her nest. It’s easy to confuse a flying ant for a termite, particularly in the case of red carpenter ants.

However, almost all ant species can grow wings. If you want to tell the difference between ants and termites, check out these criteria:

The Life of a Flying Ant

Flying ants begin their lives as eggs. Some eggs are eaten, but most transition into larvae. Larvae are worm-shaped creatures without limbs or eyes. They require a constant supply of food to grow and need the adults to provide them with meals.

If a female larva receives extra food, her hormones may allow her to become a fertile queen. Female and male larvae who do not get special treatment will remain a standard size. Virgin queens have larger ovaries, bodies, and wings.

Throughout the larvae stage, the ant molts frequently. Once it reaches a specific size, it becomes a pupa. Pupae resemble adult ants with folded antennae and eggs. It takes several weeks to months for ants to become adults.

A few days after eclosing from their pupae stage, male drones develop their sexuality and grow wings. Drones and future queens will wait in their parent colony for several days until there is clear weather. Usually, each colony of one species will synchronize their nuptial flights to reduce inbreeding and ward off predators.

During the nuptial flight, the queens will fly as far as possible. At their desired location, they release pheromones that attract drones. Queens often play games with the drones to ensure they mate with the strongest ones. The ants also mate while flying.

After mating, the queen will search for a place to start a new colony. She tears off her wings, digs the nest, lays her eggs, and raises the first generation. The male ant will lose its wings and die within a few days.

Sometimes the queens eat the drones after mating. Basically, you see flying ants when they are searching for someone to mate with. They do not fly around for long, only until they finish reproduction.

Not all queens can successfully start a colony. Most encounter predators and get killed. Colonies may produce millions of virgin queens and drones, only to have one survive.

How to Get Rid of Flying Ants 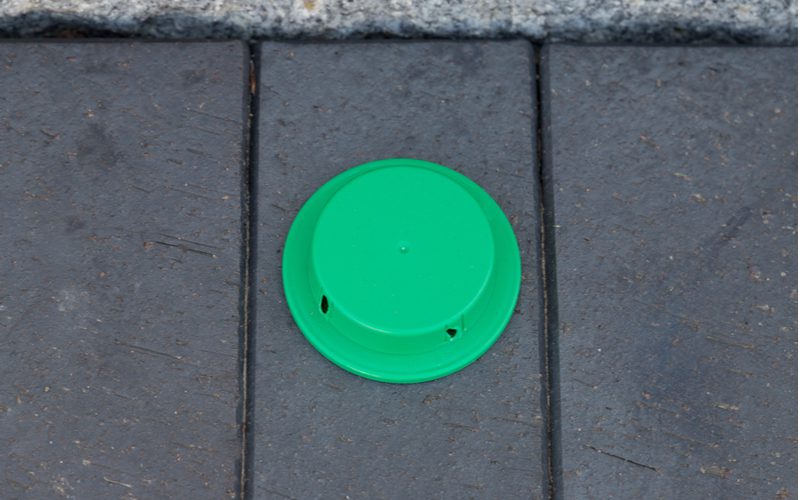 We’ve covered how to get rid of regular ants, but do you need to treat flying ants differently? If you find a flying ant in your home, it may try to start a colony. However, the queens have a high failure rate and the males will die after mating.

Regardless, nobody wants ants in their house (unless they have an ant farm). Here are a few ways to get rid of them.

Overall, you can use the same techniques as you would for crawling ants. You may want to focus on eliminating the colony to minimize the chances of a new one forming. You can prevent flying ants from returning by stowing away all food, keeping your house clean, sealing cracks, and repairing rotten wood.

Here are some common questions about flying ants:

What Causes Flying Ants in Your House?

Reproductive ant swarms cause flying ants in your house. When a mature colony decides to create a new one, it sends out virgin queens and drones to mate away from their original home. They travel expansive distances and may cross your property on their path.

Should I Worry About Flying Ants?

You don’t have to worry about flying ants more than crawling ones for the most part. The queens have a high failure rate since predators, other ants, poor parenting, and environmental dangers will kill them. Most drones you encounter will die in a couple of days anyway.

However, seeing flying ants could indicate that a queen is starting a new colony around your property. If you see a queen and do not want her around, you should kill her to prevent new ones from trespassing on your land.

Can Flying Ants Damage Your Home?

Most flying ants won’t damage your home, but carpenter ants can. These cause structural damage by chewing through wood. They start nests in wood piles as well, so you will need to keep up with household repairs to kill their colonies and stop them from coming back.

So, What Are Flying Ants?

Flying ants are regular ants that are looking to repopulate. They aren’t any more dangerous than crawling ones, but they do indicate that a new colony may emerge near you. By learning how to spot and get rid of flying ants, you can keep your home free from pests.