Revaluate is a platform that helps identify people likely to move. This gives you a leg up on your competition because you can target these prospects long before they’re in the market for an agent.

Revaluate software analyzes the contacts in your database to identify the ones most likely to move in the next six months. Using this data to target potential movers can significantly boost the efficiency of marketing efforts.

Eleven percent of U.S. residents moved annually in the latest Census Bureau analysis, from 2017. This includes 21.7 percent of renters and 5.5 percent of homeowners. It is the lowest rate in history, as measured by the Current Population Survey.

A challenge for real estate agents is identifying the 5.5 percent of homeowners who will move in the next year or so. If they could focus on just those homeowners, their marketing efforts should be much more successful.

Real estate marketing is definitely an area ripe for improvement. Cold calling to people not in an agent’s sphere of influence or identified as likely prospects seems particularly unpromising.

This was shown when researchers at the Keller Center at Baylor University had agents call 6,264 random phone numbers. The 2011 experiment produced just 19 appointments with prospective clients. That’s barely a 1 percent success rate for the 1,774 calls that were answered.

Revaluate is potentially around twice as effective as these lead sources, according to an Altos white paper. It found around one out of five leads generated by Revaluate did, in fact, move within six months.

Revaluate’s CEO and co-founder is Chris Drayer, who has a background in providing marketing advice to real estate brokers and startup technology companies.

The Golden, Colorado-based company was founded in 2014. The company got its start as a business plan presented to a startup incubator. The business model was originally to provide community livability ratings along with detailed reports on individual homes.

In 2016, Revaluate introduced its move-predictor offering. Now Revaluate sells this offering to agents, brokers, teams, and enterprises in the real estate and mortgage industries.

Should you need to contact the company, you can do so via one of the contact methods below:

Read on to learn about Revaluate and how their unique product can save you time and money and boost your prospecting efforts.

To use Revaluate, agents upload their contacts to the company’s AI-powered analysis platform. The company’s software works with several popular real estate CRMs.

After waiting 48 to 72 hours, the agent is notified which prospects are likely to move. The notification can come via text, email, through Revaluate’s dashboard or through the agent’s usual CRM. 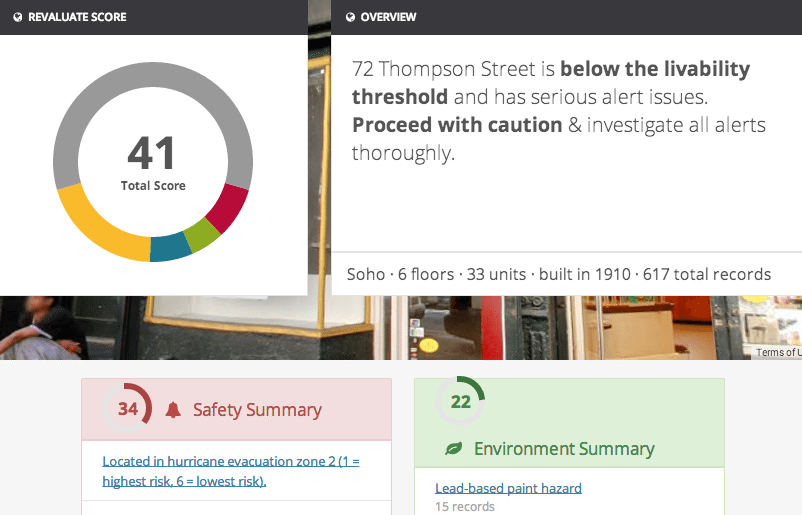 The prospects are scored from 0 to 100. The higher the score, the more likely the prospect is to move within six months. When a score is above 80, Revaluate notifies the agent that “Very Likely to Move.”

At that point, the agent can contact the lead to suggest a meeting. The idea is that this will be before the prospect has listed or perhaps even made contact with another agent.

The agent can show up for the coffee or another meeting with a CMA in hand. Ideally, this pre-emptive strike will give the agent a better chance of listing the prospect’s home for sale.

Revaluate starts with email addresses for all the contacts in an agent’s database. Then it runs these addresses through vast quantities of data to generate its scores.

Revaluate ultimately focuses on a relatively small number of data points, however. The company’s co-founder calls these the “Data Ds.” They are:

Targeting pre-movers this way can be effective. Revaluate’s subscribers say more than 36 percent of prospects it highlighted did, in fact, move within six months. That’s nearly twice as high as the rate found independently by Altos.

Revaluate integrates through APIs with popular CRMs including:

Agents can upload data in three standard file types: CSV, XLS, and XLSX. The only required contact information is an email address. However, if an agent has more information such as an address, Revaluate can provide additional analysis.

Agents must import data using a preset template. This ensures the data is labeled correctly.

The company bases the price for its service on the number of contacts in the agent’s database. The more contacts, the higher the price.

To find out how much Revaluate will charge, it’s necessary to request a quote from the company. This can be done on the company’s website.

To get a quote, customers have to provide credit card information. However, the company says it will not charge the card until the agent has uploaded his or her contacts. Then a data expert from Revaluate will confirm the price that will be charged.

Revaluate has shown up on some best-of lists, including being named as:

Pros (what it does well)

The major advantage Revaluate promises is to help agents save time and get more listings. This is essentially the same promise as other lead generation sources, of course.

One difference with Revaluate is that it uses an agent’s own database as a source for leads. This is unlike lead sources such as Zillow. It means agents won’t chase the same leads as every other real estate professional.

Also, Revaluate uses its predictive analytics to identify the contacts most likely to move. This is different from merely forwarding leads on people who have already started looking. It gives agents a chance to contact prospects before they have even begun the process.

Cons (what can be improved)

Revaluate is only effective for agents who have at least 1,000 people in their contacts database. Also, the software requires an email address for contacts to gather data and apply its predictive analytics.

For instance, agents can invest the time to contact all their contacts instead of paying to identify those most likely to move. That way, they may get similar results without financial cost.

There are really no companies that do this type of analysis. There was a feature on the Facebook Ad platform that was called “likely to move” but this has been removed.

For this reason, cold calling is probably the main competitor of Revaluate. However, Revaluate’s reported 19 percent success rate at identifying movers make it hard for random cold calling to beat.

Similarly, analysis suggests Revaluate is twice as effective as sources such as Zillow and Realtor.com at finding people about to move. Depending on the cost comparison, however, these other sources may still be good alternatives.

While we like the concept of Revaluate, the lack of pricing and third-party information available online makes us question how many people actually use it. In theory, it’s a great model. However, we can’t recommend products if we don’t know how much they cost.

If you’re interested in using AI to help vet leads, it’s worth giving Revaluate a shot. I’ll go out on a limb and guess that they have some sort of free trial, as most software companies do.